I was lucky enough to be able to take a grand road trip last week with some old friends from college. We headed out west towards Colorado, in a trip that put nearly 2,500 miles on my friend's car and 1,375 pictures on my camera.

We left Arkansas and headed west on I-40, crossing through Oklahoma and eventually into Texas. From Oklahoma City, the freeway followed the path of what has to be the classic of all American road trip drives - Route 66. Now if you've seen the movie Cars, then you know the story of Route 66. Once known as the Main Street of America, much of the old road is gone. In many places it was replaced with the interstate, which cut off many of the small towns that made their livelihoods from the steady stream of traffic.

Driving along the path of Route 66 now takes you past gas stations that were abandoned decades ago. Ruins of repair shops and old souvenir stands sit out in various states of deterioration. A few stubborn shops are still open, seeing business from travelers seeking a nostalgic return to the glory days of the Mother Road.

We stopped for dinner at the small town of Shamrock, Texas, which is located in the flat lands of the panhandle. Shamrock is home to one of the most well-known Route 66 landmarks - the U Drop Inn. 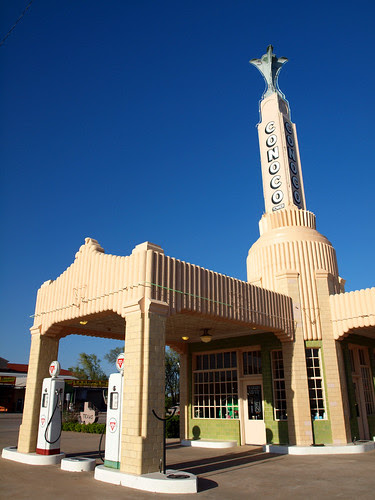 The old building used to house a gas station and cafe, and was built in 1936. It's a great building with unique art deco styling that sits on what was a prominent spot along Route 66. But when Route 66 was officially decommissioned, the stores inside closed down and the building fell into disrepair. Luckily a local bank purchased the building in 1999, and donated it to the city. The building was completely restored and is now a home to a cafe, museum, visitor center and gift shop. 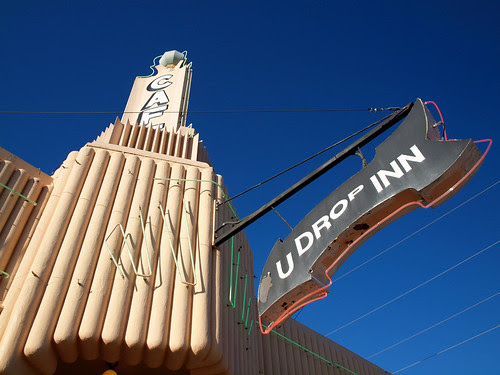 The building was the inspiration for one of the shops in Cars, too.

From Shamrock we headed further west, towards Amarillo...
Posted by Cormackphotos at 9:28 PM