A shot of the curved sidewalk at the formal entryway to the Arkansas State Capitol in downtown Little Rock. Why is the sidewalk here curved, you may be asking? Well it's because way back in the early 1900s, someone made a mistake. One of the architects of the capitol (George Donaghey, who was also governor at one point) laid the capitol foundation out so that it followed a north-south axis. He also designed it so the dome sat squarely in line with the middle of Capitol Avenue. Unfortunately, he didn't realize that the Little Rock street grid didn't line up east-west. They were at an angle because the streets were aligned with the Arkansas River. When the error was discovered, they couldn't tear down the building or re-do the city streets, so we have a crooked entryway that connects the building to the street. 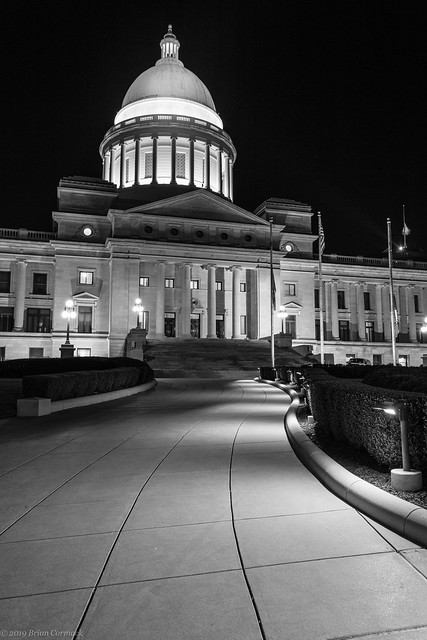 Another prominent older building in downtown Little Rock is the Pulaski County Courthouse, which was built in 1889 in a Romanesque Revival style. The courthouse tower was damaged by a storm in 1961 and taken down, but was replaced with a historically accurate tower in 1995. 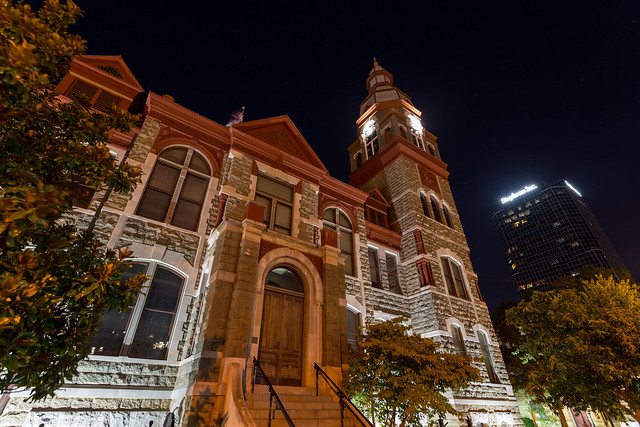 The courthouse sits in the heart of downtown, and is located right by The Old State House, Robinson Auditorium and Little Rock City Hall. A small park sits by the side of the courthouse, and has some rose bushes and an old fountain. The fountain dates from the 1960s and sat flowing and bubbling away as all the traffic sailed by on Broadway. 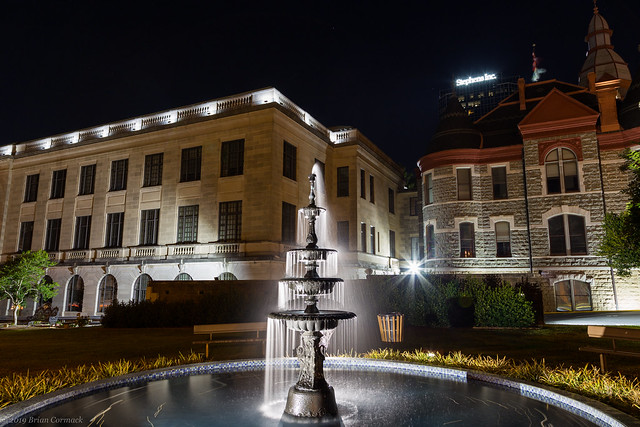 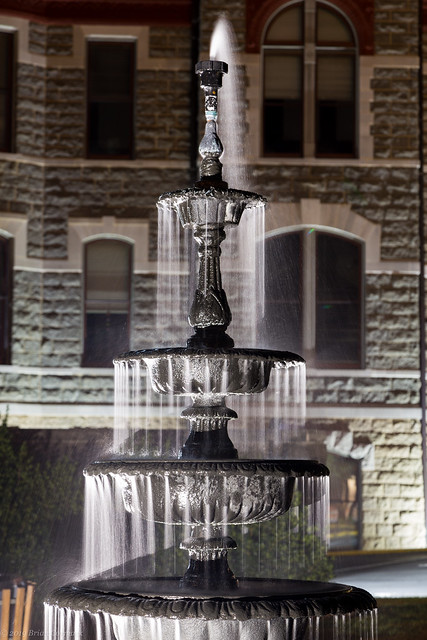 If there is one thing the city of Little Rock loves doing, it's knocking down old buildings and replacing them with parking lots. So it's always nice to see buildings that have survived the wrecking ball. One such building is the old Hinderliter Grog Shop. This unassuming structure actually holds the claim as being the oldest building still standing in Little Rock (I love that our oldest building was a bar). It as built in 1826, back when Little Rock was just a fledgling little frontier town. In 1835, right before Arkansas became a state, it's thought that the territorial government met here (which makes it a capitol building, sort of). By the 1930s, the building was getting a bit run-down and was nearly condemned, but preservationists stepped in and preserved it. The building is now part of the Historic Arkansas Museum. 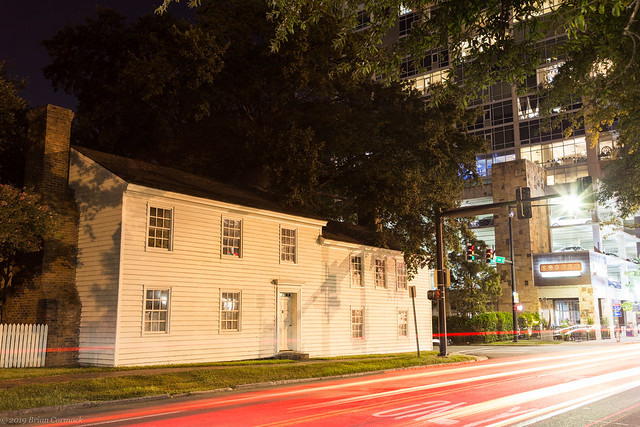 I've recently been going through some of the boxes of old film negatives that have been collecting dust for the past few years. I found several rolls of film that were taken in Hot Springs, all the way back....in the year 2000.

I know now that people are supposed to find a prestigious internship the summer before they graduate from college, one that can help put you on the path to future success in your desired career. Well that year, three friends and I did the opposite of that. We decided it would be fun to instead move to Hot Springs for the summer and all take jobs working at the Magic Springs theme park, which had just reopened. So we managed to snag jobs at the park (I worked in games!), and then also find a house to rent (an old run-down house in need of repairs that we got only because no one else wanted to move in there). I did take advantage of my time there and took a bunch of pictures, mostly using infrared black and white film. 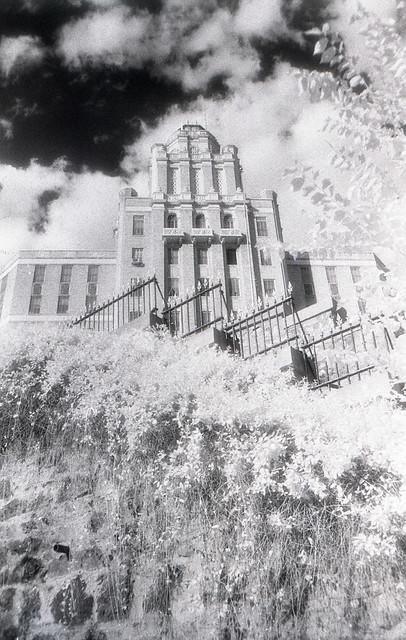 Infrared film can achieve some pretty cool effects, sometimes resulting in grainy and surreal photos. A blue sky would show in infrared film as a dark black, and plants and vegetation would vibrantly appear white like in this shot from an overlook in the National Park. You can tell this is an old photo because the Majestic Hotel is still there in the distant background (it was still open when this was taken, it would later close and then be partially destroyed by a fire). 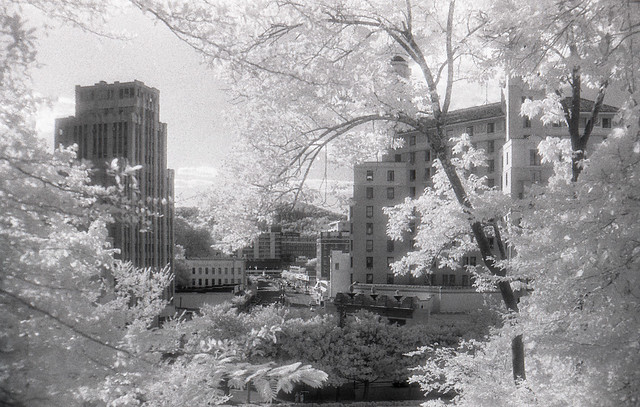 It was a fun film to play around with, although it was notoriously tricky and delicate to use. The film was extremely vulnerable to light, and had to be changed in complete darkness. If you weren't careful, the film would be ruined by light leaks (which several exposures I took were, because I was definitely not careful enough handling it). There was only one place in the state that would develop the film - a little shop called Pinkey's Photographic that used to be located near Central High in Little Rock. Unfortunately it, like so many other little independent photography shops, have long since closed down. 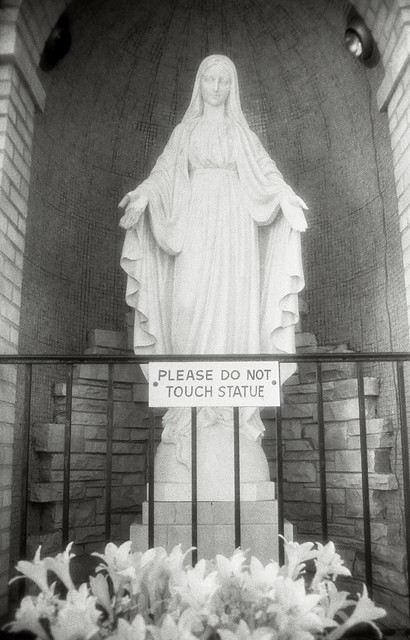 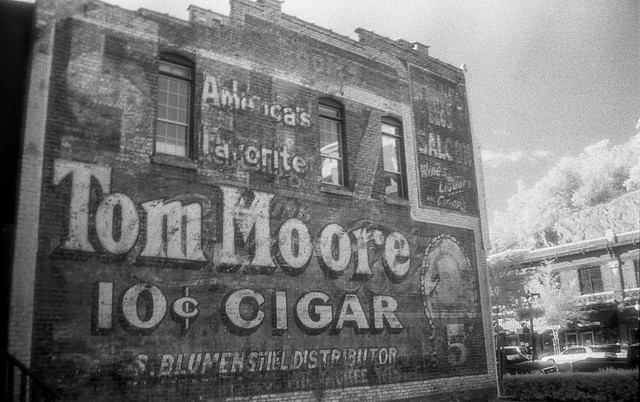 This is a shot of the old National Baptist Hotel, which was built in 1923 as the Woodmen of Union Building. The building was empty and abandoned when this was taken, although it held a great deal of history. When it was built, the building contained a hotel, a performance venue and a bathhouse that catered to African American visitors. This was in the sad age of segregation, when African Americans were allowed to work in the fancy Bathhouse Row bathhouses but not actually allowed to take baths there. The National Baptist Hotel and Bathhouse closed in 1981, but was saved a few years ago and is now an independent living facility for people aged 55 and older. 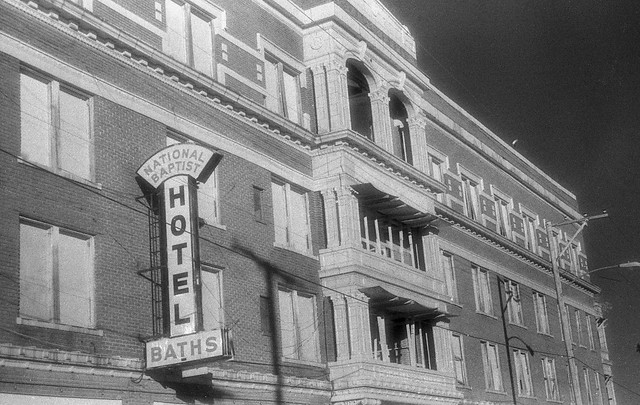 Along Central Avenue is the old Fountain Motel, one of several old motor inns that were built in the 1950s and 60s. The motel used to have this great old neon sign, but it has since been taken down and replaced with a sadly modern sign. 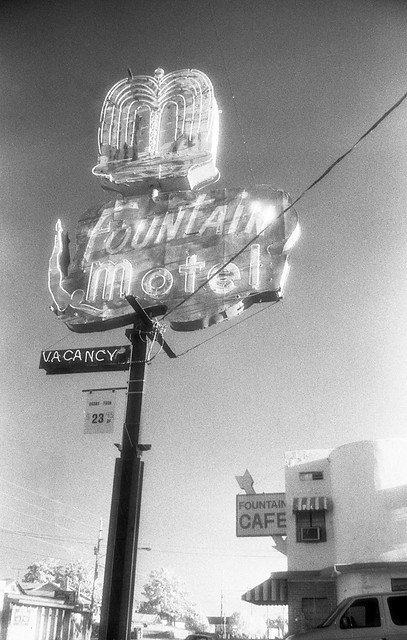 Also near Central Avenue is the old Knickerbocker Hotel, which was built in the 1930s and catered to Jewish tourists and residents. The building is still empty and abandoned today. 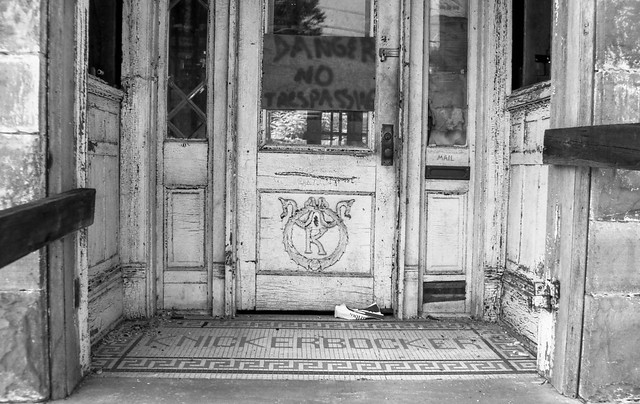 And one shot looking up at the Medical Arts Building, one of the most architecturally interesting buildings in the state. It was abandoned and empty when this was taken in 2000, and sadly nothing has changed since then. 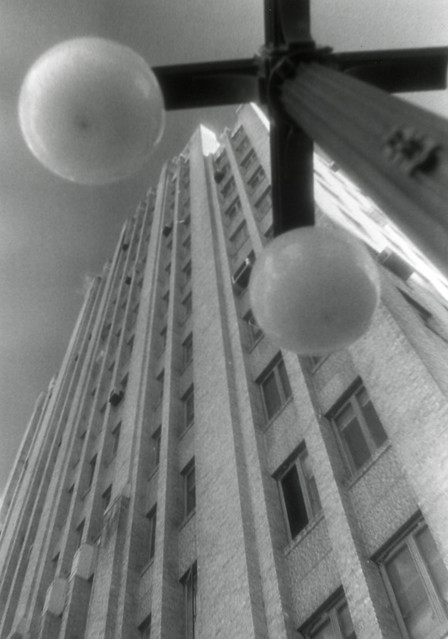 And while driving randomly around with a roll of regular black and white film, I stopped and got this shot. I can't remember where this was taken so who knows if it ever did become a fish stand. 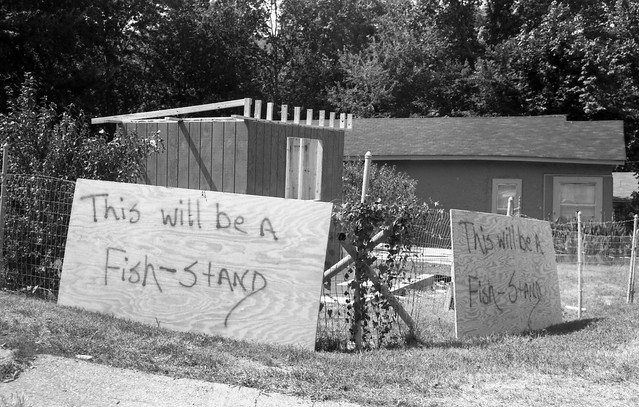 And one last shot from the time capsule of old negatives. This was from a roll of color film and again shows the old Medical Arts Building. Not much has changed in the decade or so since, except now the streetlights are LED and they give off a cool white color instead of the soft yellow of the sodium vapor lights. 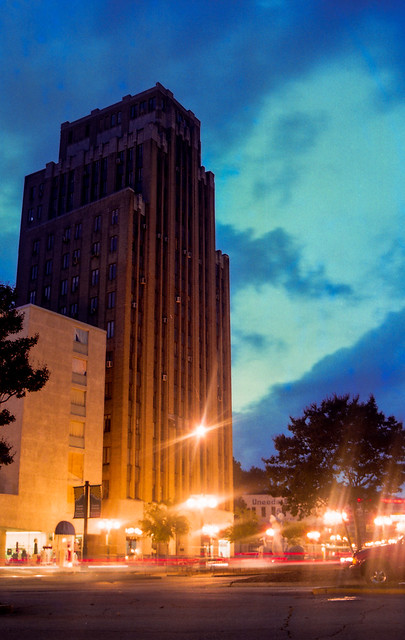 Posted by Cormackphotos at 10:23 PM No comments:

I was able to get out for a bit last weekend and ended up in Riverfront Park in North Little Rock. It was still hot and muggy, but mercifully there weren't that many mosquitoes out along the river. I made it in time to catch a bit of sunset over the Arkansas River and downtown Little Rock. 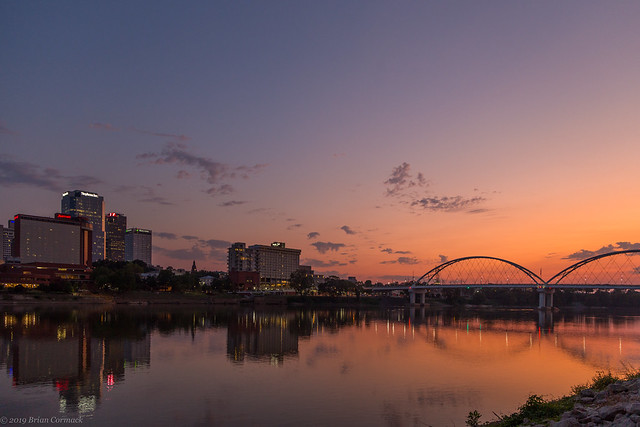 And a panoramic view with the last bits of light from the sunset in the western sky, and the Main Street and Junction Bridges shining bright off to the east.

And a closer view of just the Main Street Bridge, where the trolley rolled across a few times while I was out there. 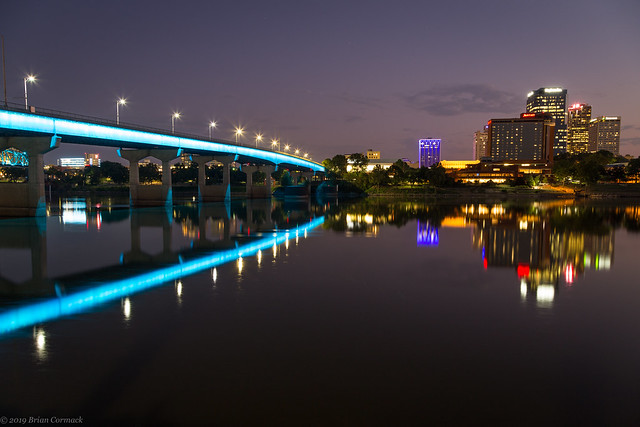 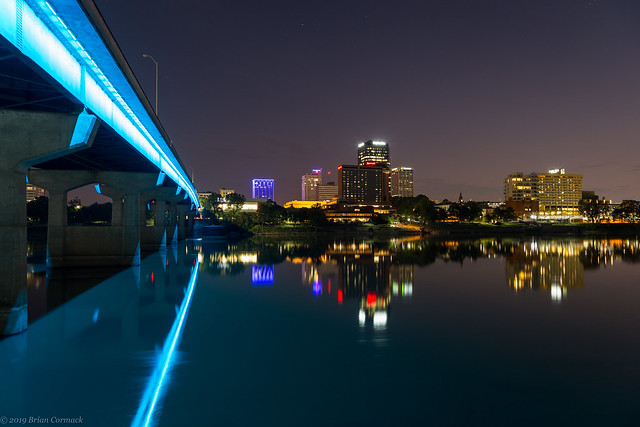 And one last shot, taken downriver by the Clinton Park Bridge, which was bathed in a deep red light. 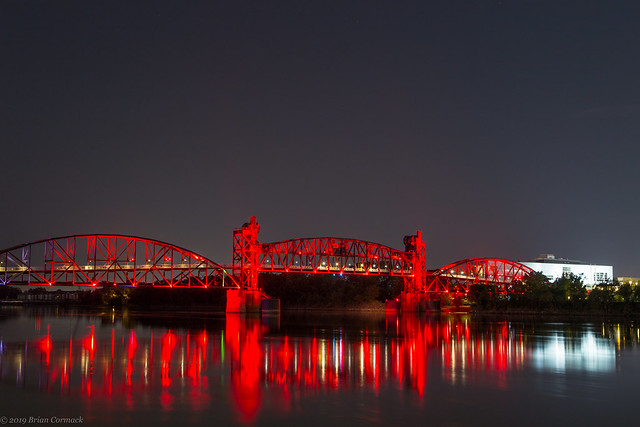 Often when visiting an abandoned building, you are left with several questions. When was this building abandoned and why was it left to the elements to decay and fade? Who were the people who built it, and who decided to let it go? A lot of times it is hard to find much information about some buildings, so they are left in mystery. I wish I knew more about this church, located in the Delta region of eastern Arkansas. It looks to have been abandoned for awhile, with part of the roof caved in and collapsed (making it a holy/holey roof). 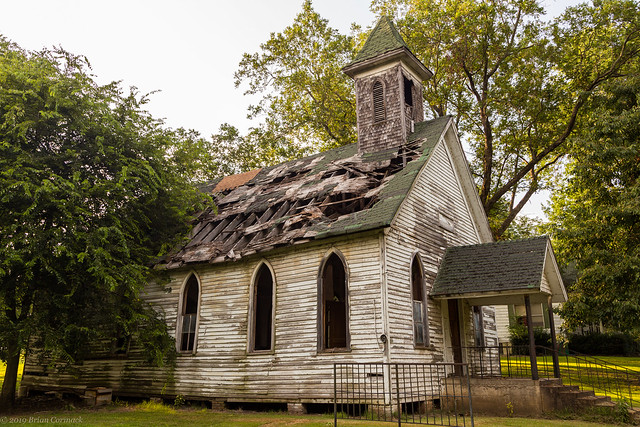 The interior of the church raises more questions, namely what happened here? Why is one half of the building nearly gone, while the other almost looks to be ok? What's the story with the piano in the middle? Did someone try to move it, only to manage to get it to this spot before giving up? Also there were some holes in the floor, would I fall through if I walked inside to take pictures? 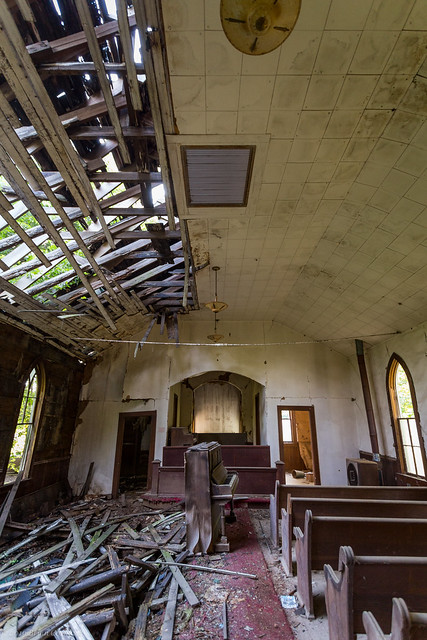 And a close-up view of the piano, with the gaping hole in the roof above. Which made me wonder how much longer this building will be standing? And how many people would mourn it once it inevitably collapses? 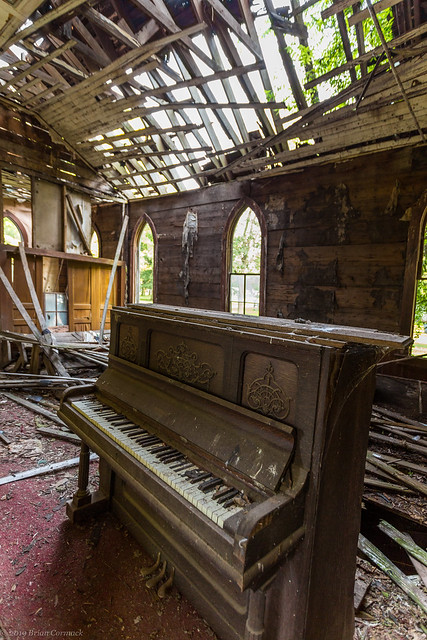 Nearby was this old abandoned home, which was slowly being devoured by vines and weeds. 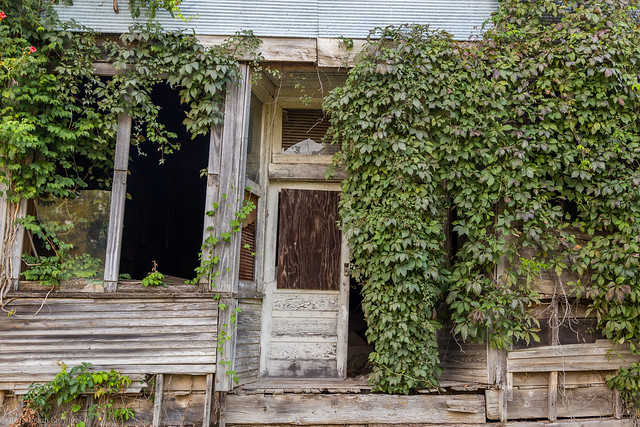 Down the road was this old store, which despite what the "OPEN" sign says was definitely closed for business. 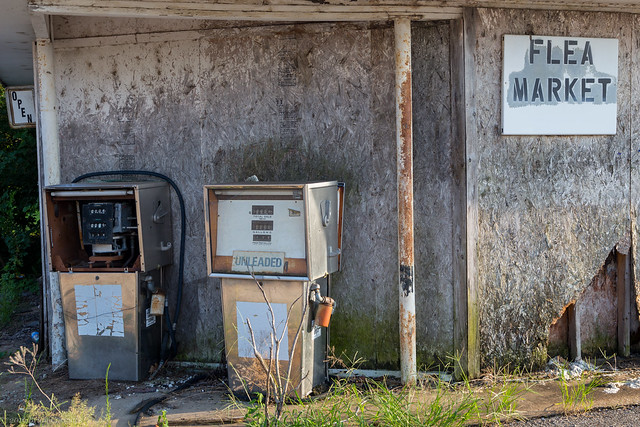 Also nearby was this spherical building sitting by an old cotton gin, looking almost like a metal wigwam. I stopped for a few pictures and was greeted by a curious dog who stood in the street to see what I was up to (part of the town's version of the Paw Patrol, I'm guessing). 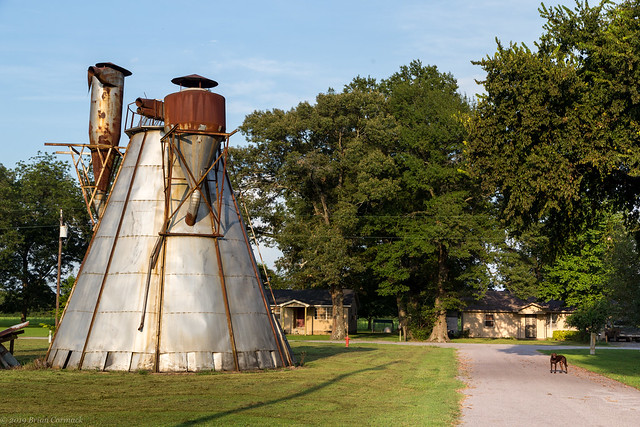