After work last night, I headed downtown to take a few pictures. I ended up going to the foot of the Clinton Park Bridge in North Little Rock. I set up the camera and waited for dusk to settle over the city.

The Clinton Park Bridge is an old railroad bridge, built in 1899 by the Choctaw and Memphis Railroad. It was opened up as a pedestrian bridge earlier this year, connecting the cities of Little Rock and North Little Rock. This is a view of the bridge, with the Bill Clinton Presidential Library on the left: 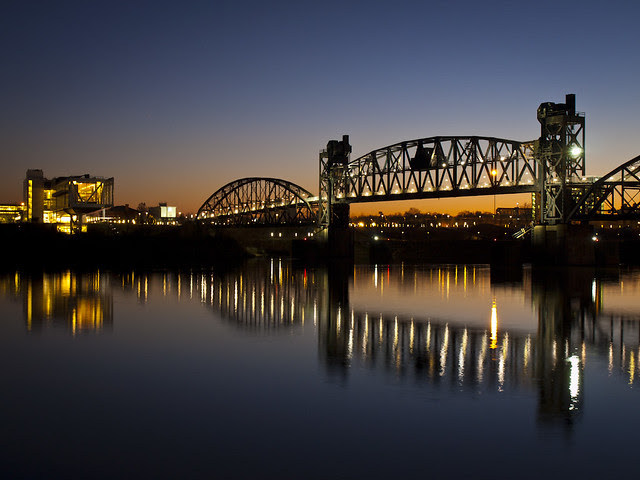 Here is a wider view of the bridge: 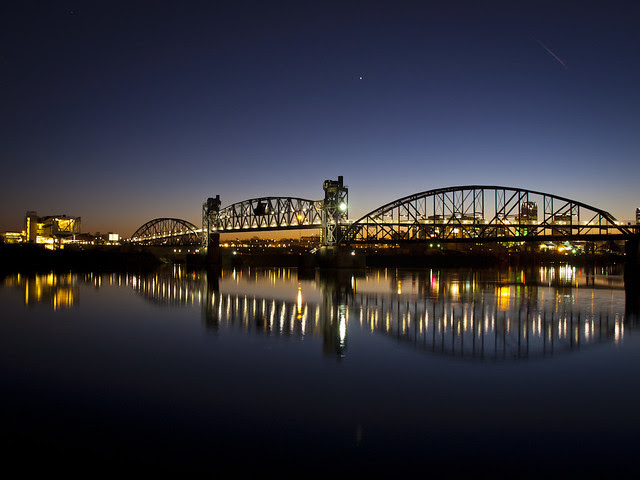 I then walked across the bridge and enjoyed the views overlooking the river. But I wasn't the only person enjoying the views of the skyline. There is a RV park that sits near the foot of the Clinton Park Bridge. As I stood on the bridge taking pictures, I saw several RVs and cars pull into the RV parking lot. Clearly one RV had claimed the best spot, so I turned the camera on it. I liked the contrast between the busy city on one side of the river, and the quiet RV parked along the opposite shore: 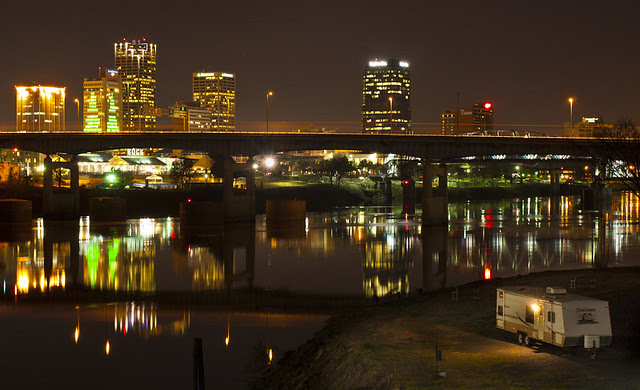 Posted by Cormackphotos at 10:56 PM 3 comments:

After spending all of last weekend with family, I headed home on Monday. While driving along Hwy. 22 in Logan County, I passed by the old Subiaco Abbey and Academy, outside of Paris (the one in Arkansas, not France). It is a grand old building, perched right on the top of a hill. Subiaco looks very old and imposing, and the buildings here are home to a school. I admit that I know next to nothing about Subiaco's school or its history. So I'm just going to assume that it's something like Hogwarts.

I've passed by Subiaco countless times before and had always meant to get a picture of. Luckily, I had the camera with me, so I stopped for a few shots. It was cold day, with a heavy rain falling. But I tried to keep most of the raindrops off of the lens and stood alongside a dirt road to get a few shots. This was taken next to the pastures that surround the main buildings, which have a nice collection of old barns: 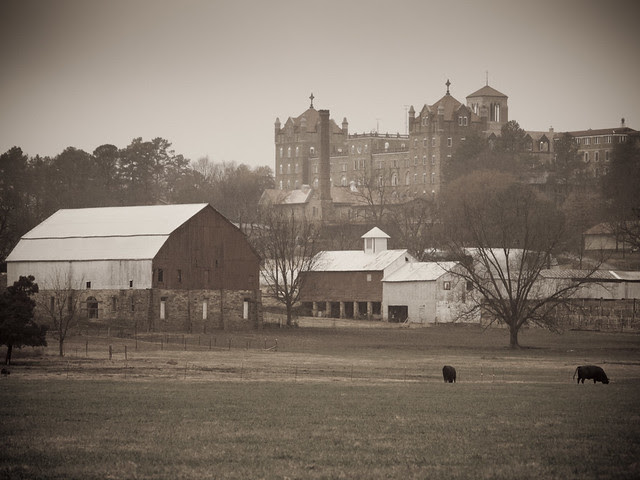 I followed the dirt road for a bit, which had turned into a muddy soup after all of the rain. My car quickly turned brown as it became caked in mud. The road passed by a few houses, and I made a quick stop at this old barn. It has definitely seen better days... 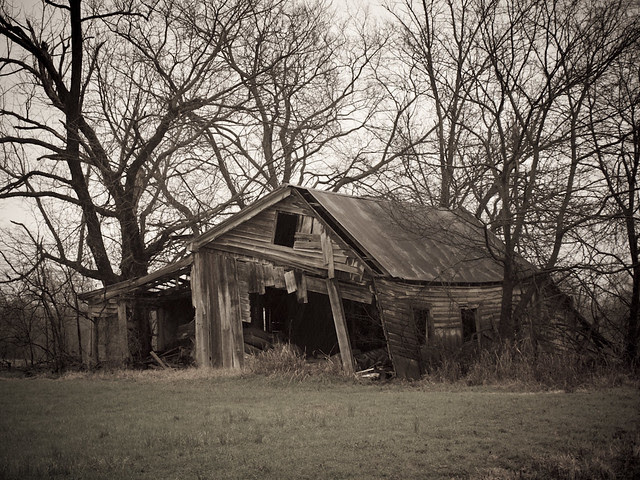 I turned around and got back onto the main road. The rain was still falling heavily, which managed to wash off most of the mud by the time I got home...
Posted by Cormackphotos at 10:07 PM No comments:

A Bunch of Birds in Beebe

At first, Beebe seems like any typical small town in Arkansas. It is located only 40 miles or so from Little Rock, and is home to about 5,000 people. But every winter, the town is also host to thousands upon thousands of blackbirds. After a tip from Zack, I headed up to Beebe with John to see the birds. Apparently you can park along the road, just off of the freeway, and be in a field where massive flocks of birds will congregate in a sprawling mass of feathered frenzy.

So we made our way up to Beebe, and found the spot that Zack had suggested as the best place to go. It was a rather nondescript and dull stretch of land. In fact, it was a field that will be soon be turned into a future Wal-Mart. But we set up our cameras and patiently waited for the birds to show up.

I admit that I was a bit skeptical at first. There were barely any birds flying around at all. But as the sun set, more and more birds flew overhead. The number of birds slowly multiplied, and then suddenly the sky became filled with blackbirds. 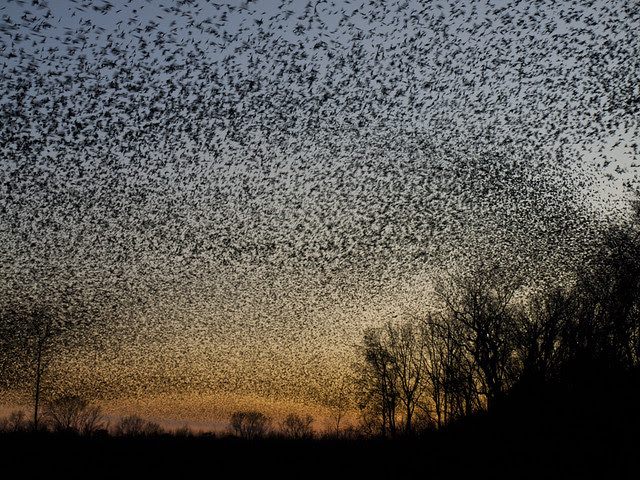 It was really quite amazing. The birds flew about like waves crashing on a beach. They would form patterns, then turn and swirl around with surgical precision. 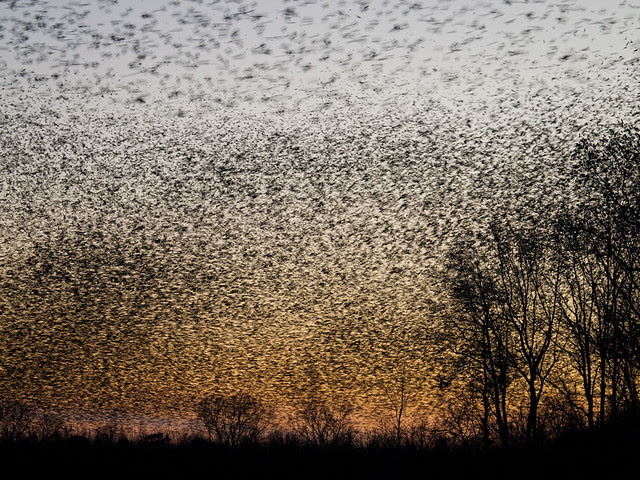 As dusk settled in, the birds turned the horizon black with movement. 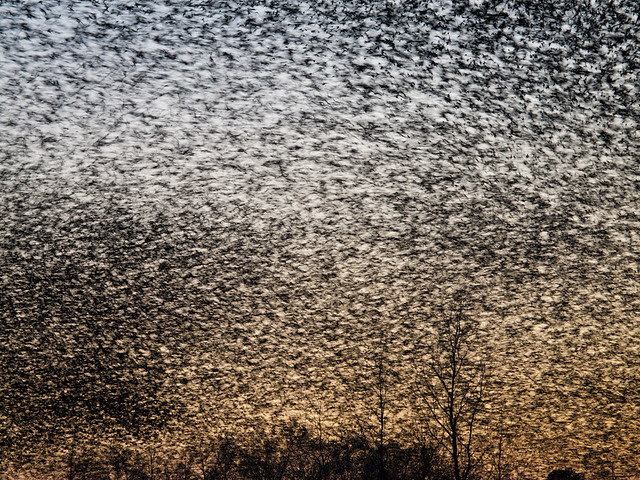 Beebe, and this flock of birds, became internationally famous when around 5,000 birds mysteriously died almost a year ago, on New Year's Eve (in what is apparently being called the "Aflockalypse." The official reasoning for the massive die-off is that the roosting birds were startled by fireworks, which caused them to fly around in panic, crashing into nearby buildings. 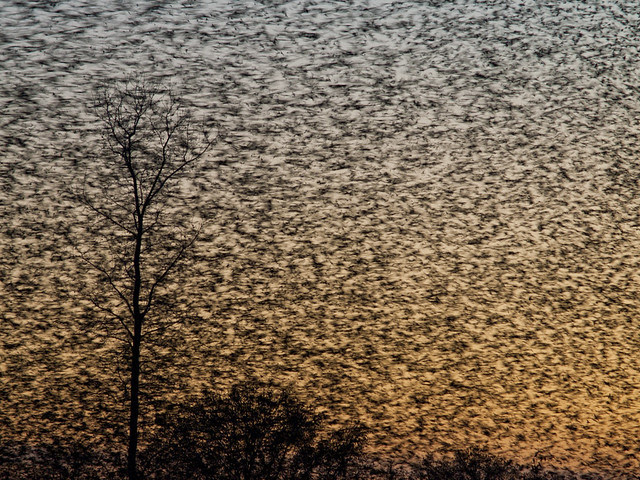 The Beebe birds reminded me of this movie, and luckily the birds here were much kinder than anything Hitchcock could have dreamed of:

Dang, I hope Tippi Hedren never has to visit Beebe!

And one last shot from the night, taken just before dark. This was a slightly longer exposure, which showed the movement of the birds as a slight blur: 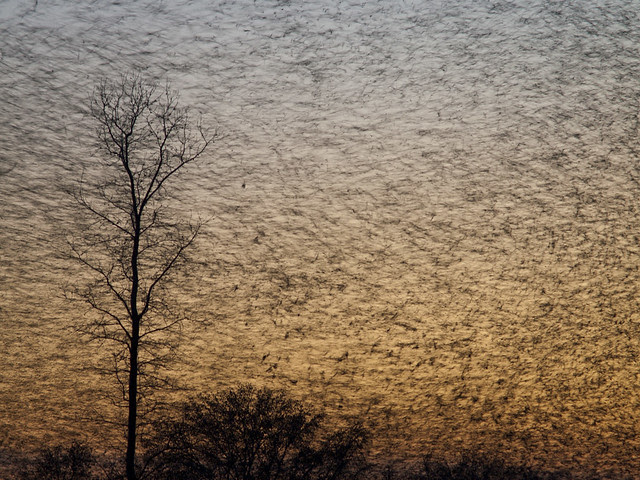 After that it got too dark for pictures. I was amazed to discover that, even with the thousands of birds flying overhead, I wasn't hit with any wayward droppings...
Posted by Cormackphotos at 9:56 PM No comments:

I've been meaning to update this site for a few weeks, but have been a bit distracted. So I'm just going to post a few pictures taken recently of Little Rock...

Awhile back, I met up with Shelby Brewer at the State Capitol to get some pictures of the Christmas lights there. It was a cold night, but here is a shot of capitol at dusk: 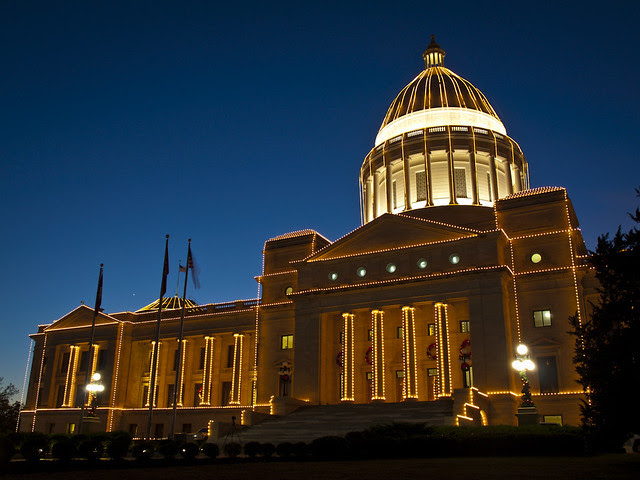 The next day, I headed down to War Memorial Stadium to catch a high school football game. It was the 3A state championship game, between Charleston and Barton. I went there to cheer on Charleston, even if I'm not from there or attended high school there. But a good number of my relatives hail from Charleston, so I went to throw my support behind them.

I got to the stadium before the game, and met up with my family. One Aunt was busy making a sign, and I suggested a sign saying "Beat FARTon," which was ignored, for some reason. This is a shot of War Memorial Stadium at the start of the second half. 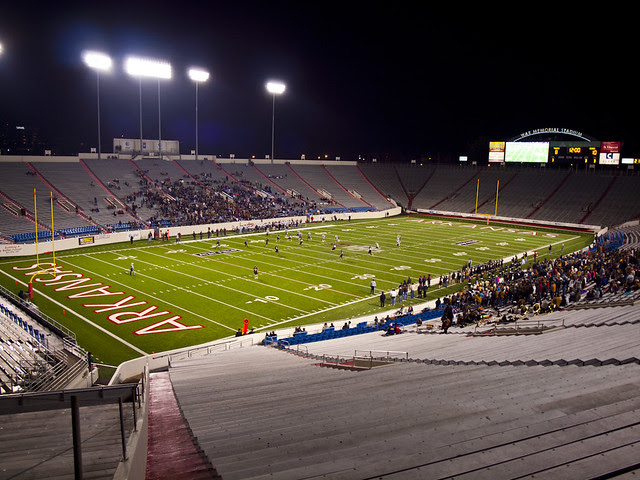 Barton was winning then, 10-8. But in the second half, Charleston would rally and go on to win the game 31-10.

A few days later, a very thick fog had settled over the city. After work, I ended up meeting Zack and we headed out into the fog for a few pictures. One of the stops was a parking deck, which provided this view of the old Albert Pike Hotel: 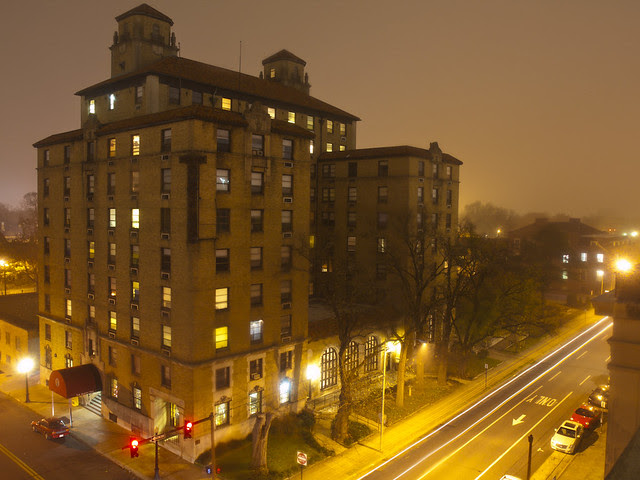 And this is the view from the other end of the parking deck, looking west: 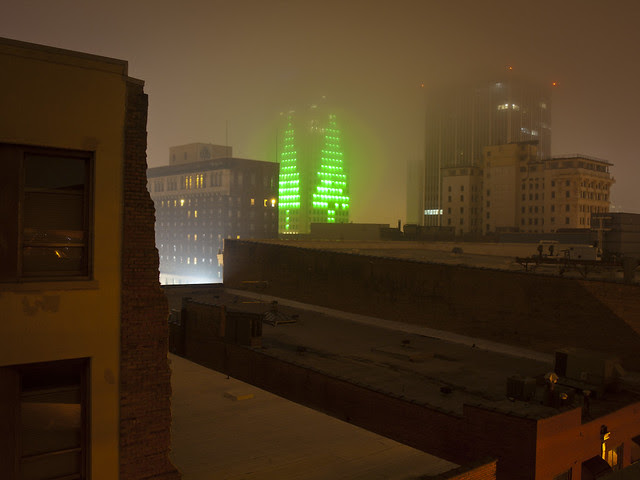 After that, we got a few pictures of the Junction Bridge and then went into the warmth of the Flying Saucer.
Posted by Cormackphotos at 10:21 PM No comments: