From Cotton Plant, I drove further east into the Delta. The drive took me through small towns and fields, and even by one police officer who pulled me over for speeding (but was kind enough to let me go on a warning, thanks!). I made a few stops, including this one at an old abandoned building that had this strange clump of dead vine stuck to its side. 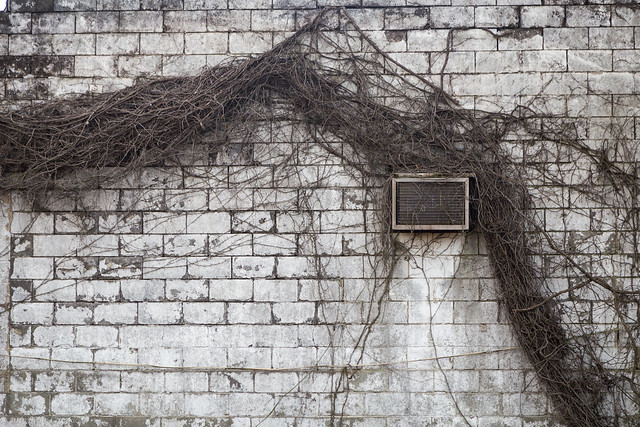 And then in the town of Wynne I stopped by the railroad tracks to get as shot (but didn't stay there too long, a big freight train passed by a few minutes later). 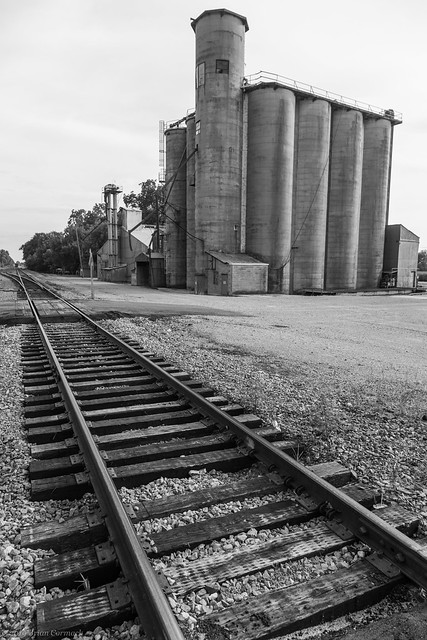 I managed to keep my speed under control as I drove towards West Memphis and then stopped by this old church, which was surrounded by a sea of tall grass. The sun was starting to set, and golden light was streaming in from the west. 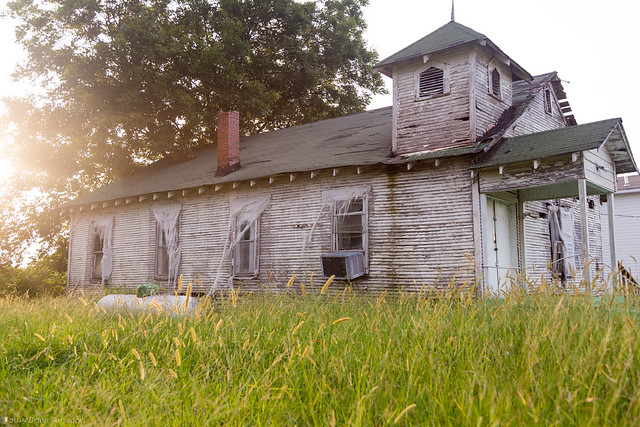 An old propane tank sat by the church, flanked by two windows that had some some wispy and ghostly remains of curtains. I wasn't able to find much info about this church, but did see a post that determined that the church was once called St. John's Missionary Baptist Church. 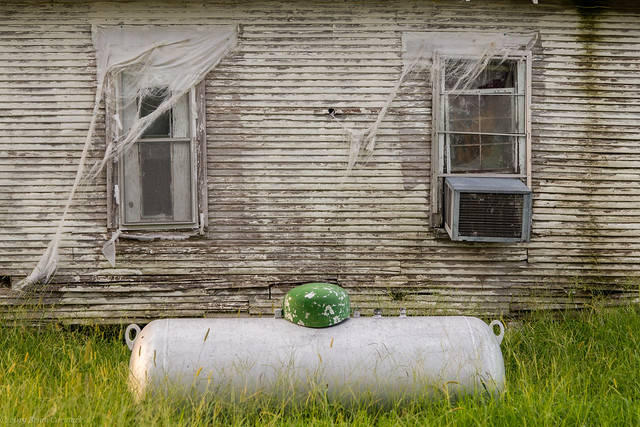 Just down the road is what I think was an old cotton gin that was once part of the Waverly Plantation. 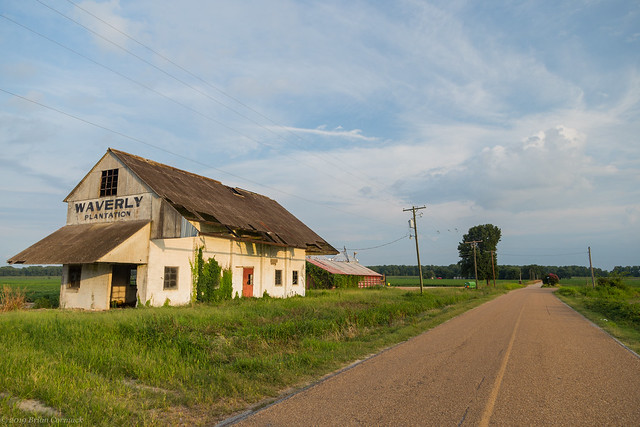 I wasn't able to find any info on when this building was constructed, but it may have been sometime in the 1920s or 1930s. 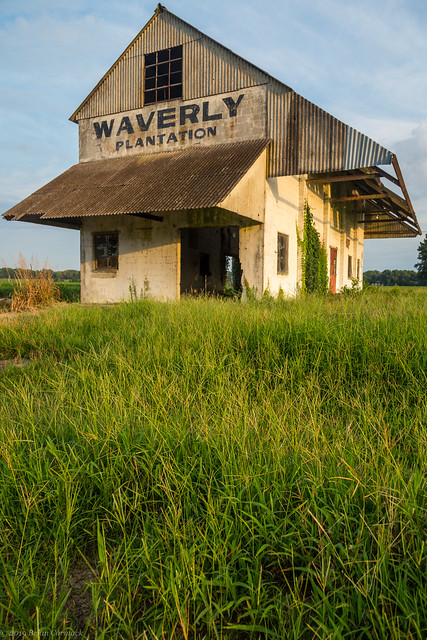 Vines and ivy were growing wild on the back of the building, which was empty on the inside (except for a few owls who were living inside). 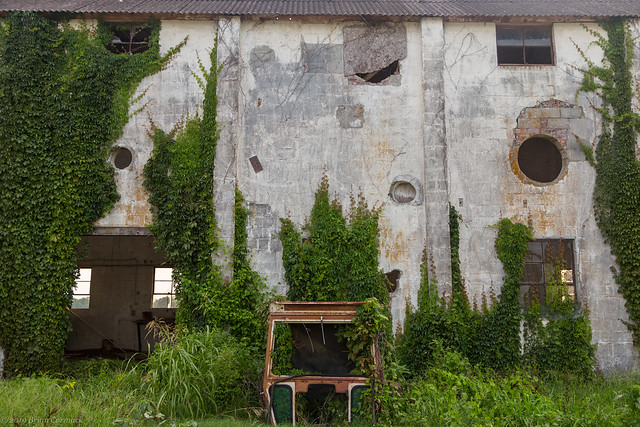 Next to the building were soybean fields and a few other buildings, and also a stretch of mud that had dried out in the summer heat. 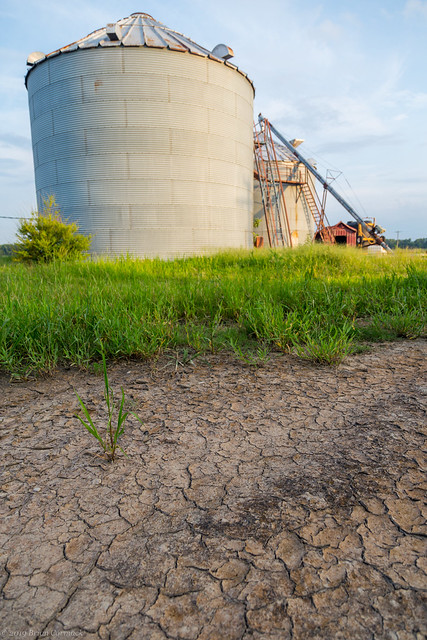 The cracked and dried mud created some interesting patterns and colors. 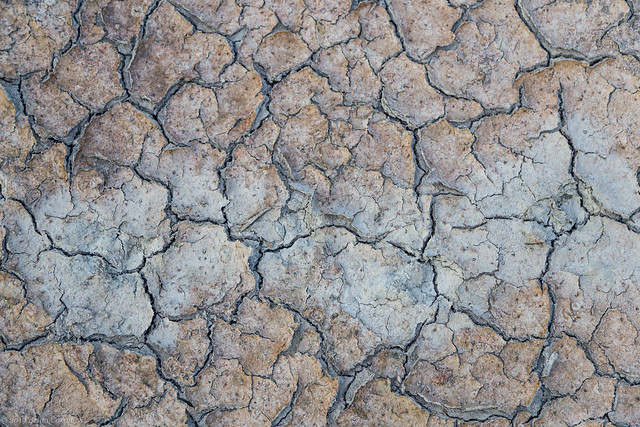 And some last shots, of a few plants that managed to catch hold in the mud and have grown up from the splintered dirt. 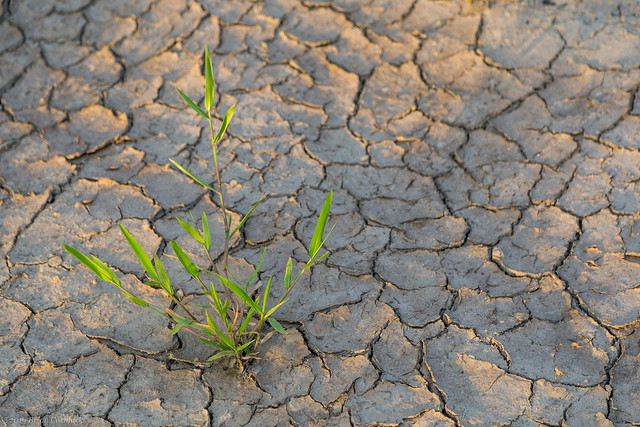 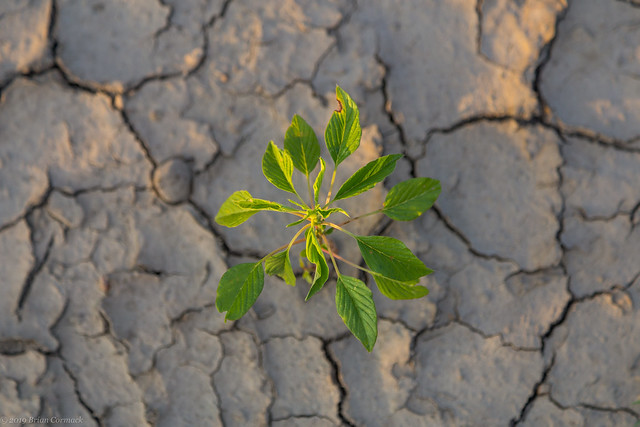 From Des Arc, I drove further east through more of the flat lands of the Arkansas Delta. Along the way, I passed by this rusty old tractor that was surrounded by tall grass and weeds. The air was thick with humidity and with hundreds of dragonflies. 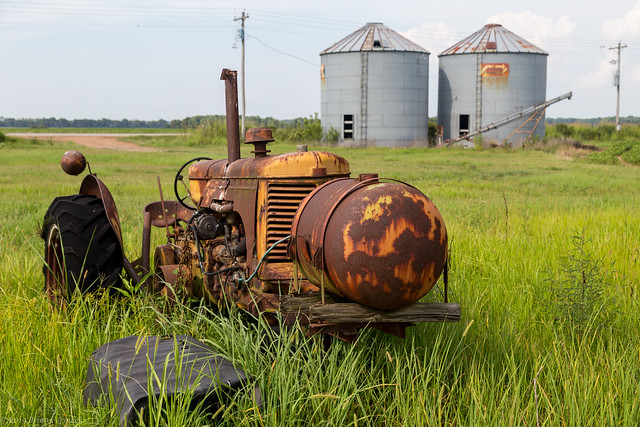 The next stop was the small town of Cotton Plant, which has a population of about 650 people. Cotton Plant was once a thriving town, but it has faced the same economic struggles that have afflicted so many Delta towns. Many buildings along Main Street looked to be abandoned and were slowly crumbling away. Vines were growing up against the side of this building, which may have been a church at one time. In the background is the Cotton Plant Water Tower, which was built in 1935 and is listed on the National Register of Historic Places. 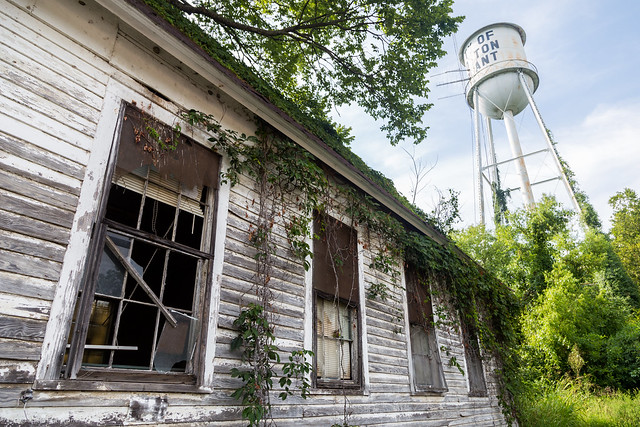 Along Main Street is this old store which still has some merchandise sitting out on display even though it has been abandoned for several years now. Thick dust covers everything inside, and the back wall of the building has collapsed. 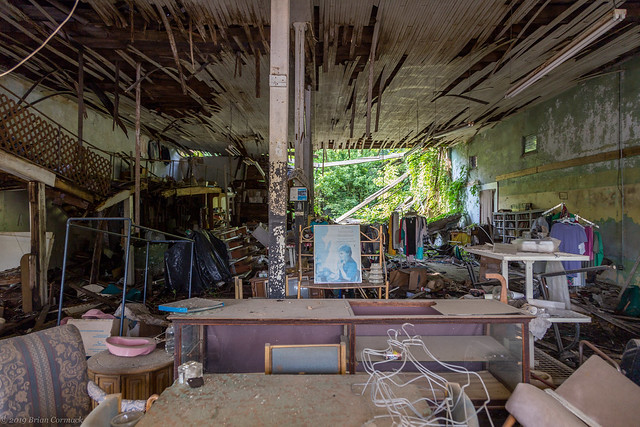 Nearby was this shell of a building, which was once the home of a liquor store. The window here may have once been a drive-through window, maybe? 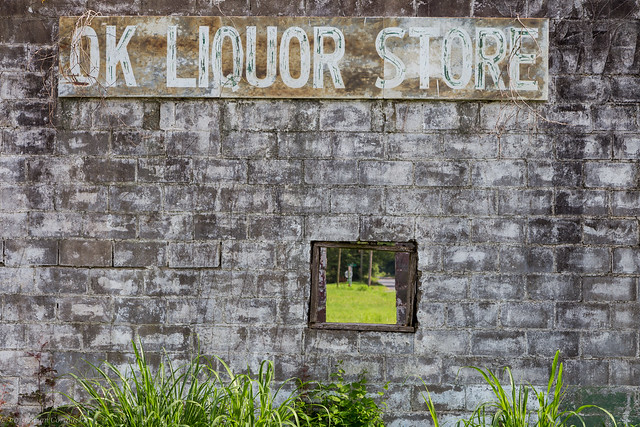 While these pictures only show abandoned and neglected buildings, it should be noted that there has been some recent positive news for the town of Cotton Plant. The town, which was named after cotton is now the home of another kind of plant - marijuana. After the state of Arkansas approved the sale of medical marijuana, a site in Cotton Plant was selected to host the state's first marijuana cultivation facility. Hopefully the economic impact of the cultivation facility will help dispel the chronic economic problems and help to lead the city to new highs. 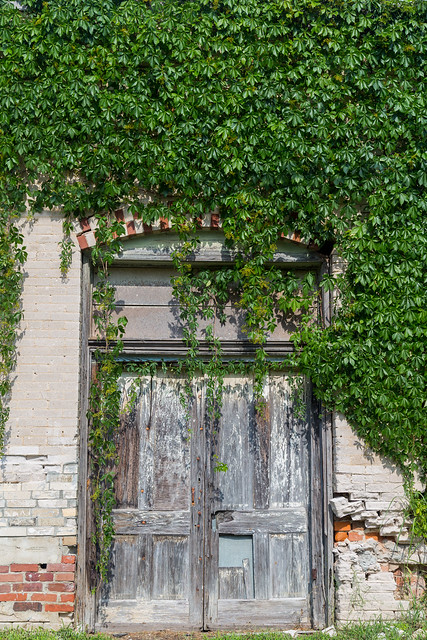 The Prairie County Courthouse in Des Arc has to be high on the list of prettiest courthouses in Arkansas. This is partly due to its location, which is perched on a bluff overlooking a curve in the White River. The courthouse was built in 1913, and features a mixture of Georgian Revival and Romano-Tuscan architectural styles. The front of the courthouse is marked by a two story portico and also a clock tower. This is one of two courthouses in Prairie County, the other one is located in De Valls Bluff. 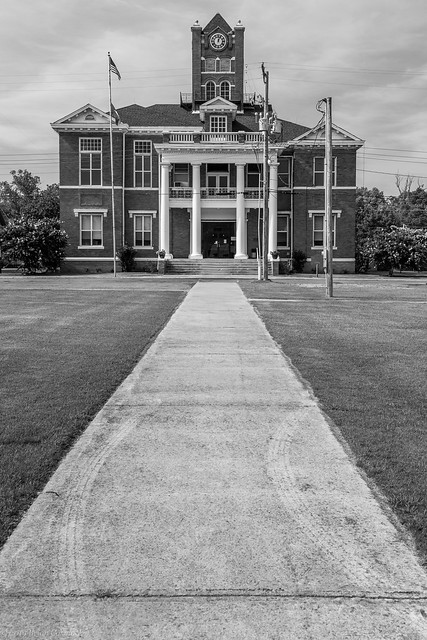 I should note that the tire tracks were already there when I took this photo, and not caused by me driving around the grass in front of the courthouse.
Posted by Cormackphotos at 11:06 PM No comments:

While in Fayetteville last weekend, we made another visit to the Crystal Bridges Museum of American Art in Bentonville. It had been a few years since our last visit, and there have been a few changes to the museum. One of the biggest is the addition of the Bachman-Wilson House, which was designed and built by Frank Lloyd Wright in 1954. The house originally stood by the Millstone River in New Jersey, but the house was under threat of flooding from the river and was put up for sale under the conditions that the new owners would move the house to safer ground. Crystal Bridges purchased the house, and carefully deconstructed it and moved it over 1,200 miles to its new home. It was reconstructed and made open for tours. We visited, but we had a restless toddler with us who was not interested in the detailed intricacies of the architecture so I missed some of the finer details of the home. 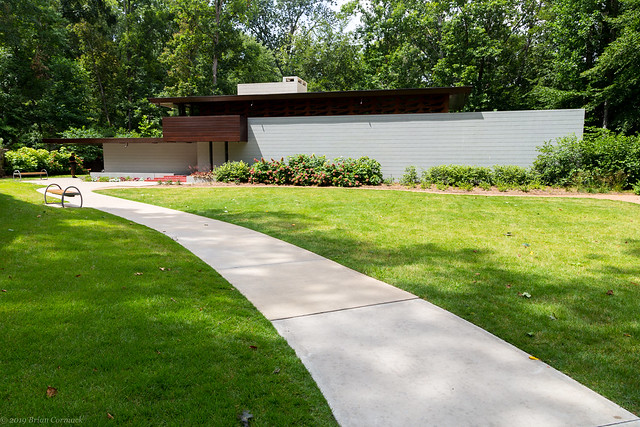 The museum opened in 2011, with eight linked pavilions that straddle two creek-fed ponds. 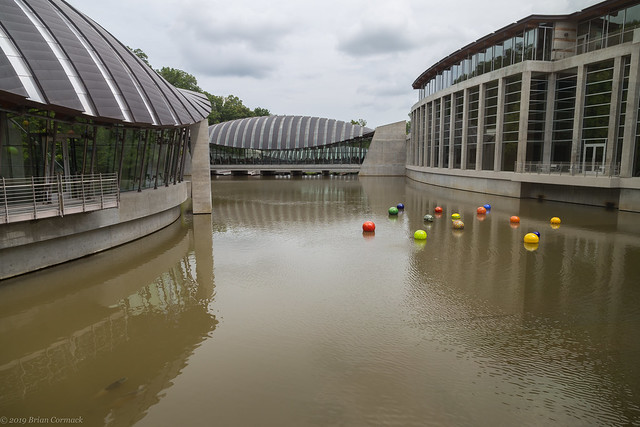 The museum contains seven galleries, a library with over 60,000 items, art studios, a museum store, a gathering hall used for lectures and films, and also a restaurant named Eleven (which was apparently not named after the character from Stranger Things). 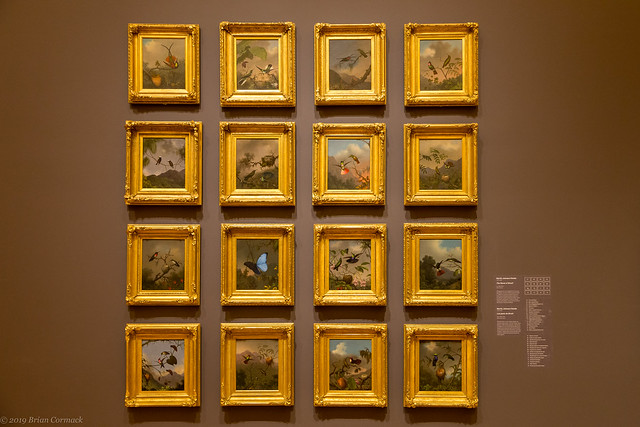 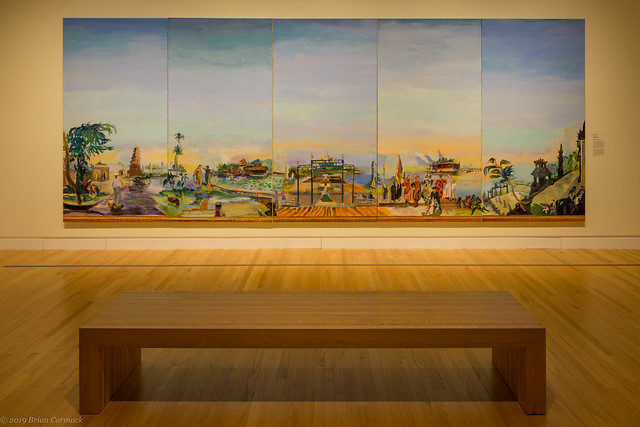 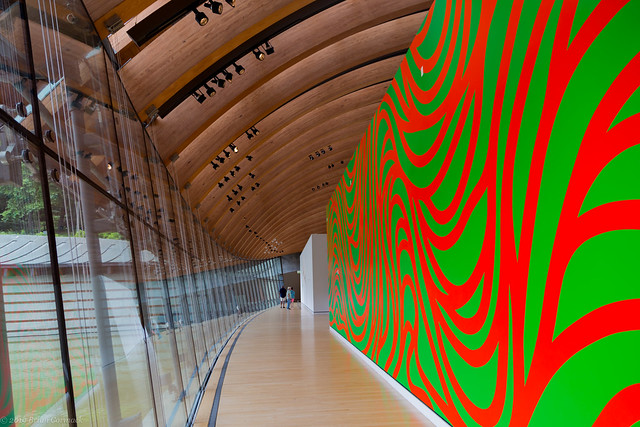 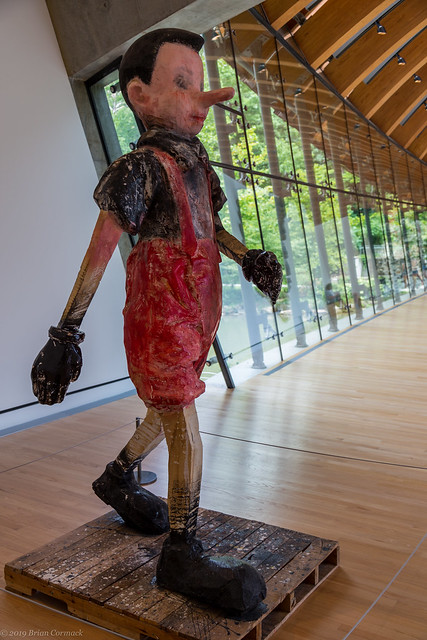 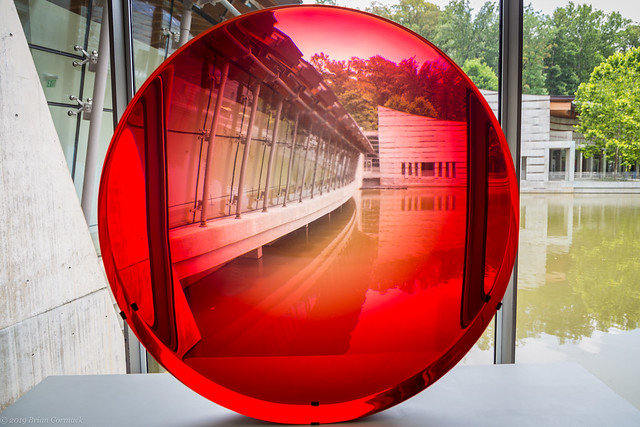 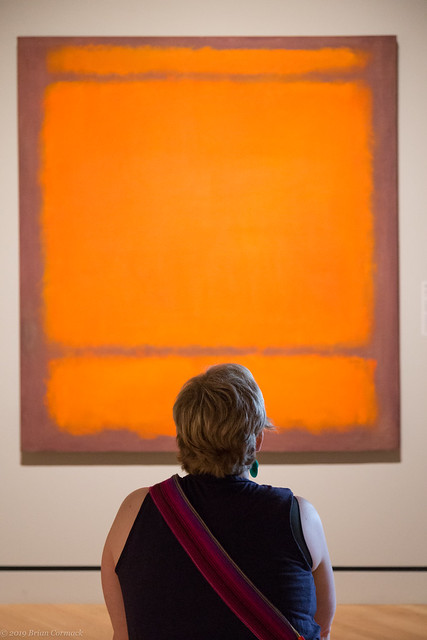 And one last shot, from the Modern Art section. This is a new piece called Some/One by Korean artist, Do Ho Suh. The sculpture is made up of thousands of military dog tags arranged as a mixture of a robe and body armor. It was a popular piece, and it was hard to get a shot of it without anyone around it. 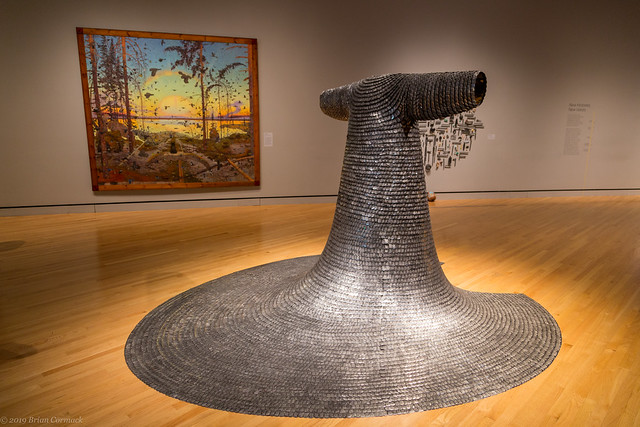 Crystal Bridges is a great museum, but my one criticism of it remains valid. There is hardly any photography on display there, which is a shame since photography is one of the most significant branches of art to have appeared in the last few centuries. If anyone from Crystal Bridges is reading this, I'd be happy to mention that all of my photos are for sale if they need any new additions to their galleries!
Posted by Cormackphotos at 11:25 PM No comments:

On Independence Day I joined the crowd of people in Riverfront Park so I could make an attempt at some firework photos. I wanted to try to get a shot of the fireworks over the Junction Bridge, so I got there early (almost three hours before the show started) so I could claim a spot in the park that had a decent view of the bridge. It was a long wait, but fortunately the weather that day was perfect after some storms had managed to push out the heat and humidity. We were even treated to a nice sunset too. 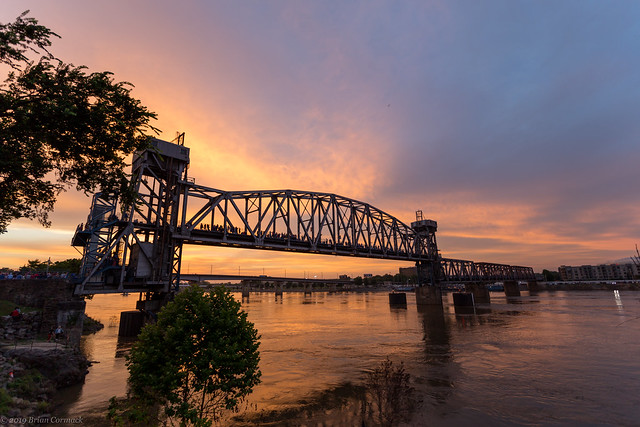 I did spend some time before the show started to carefully pick out what composition would be best. And when it got dark, I tried to work out the best camera settings for capturing fireworks. And then finally at 9:30, the fireworks started. But that meant that suddenly a bunch of people all rushed forward to get the best view. Which apparently was right in front of my camera. The shot I had envisioned during the long wait now had to be hastily changed, since there were a bunch of people standing in the way blocking my view of the bridge. But I managed to point the camera through a gap in the crowd and was able to get a few pictures of the fireworks. 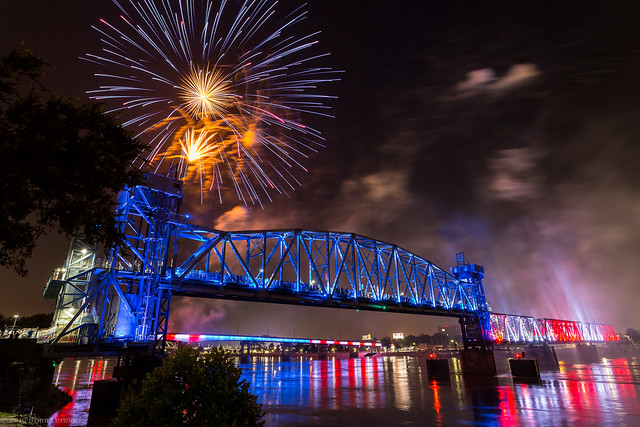 And one more shot, looking more closely at all the people jammed onto the Junction Bridge watching the fireworks. 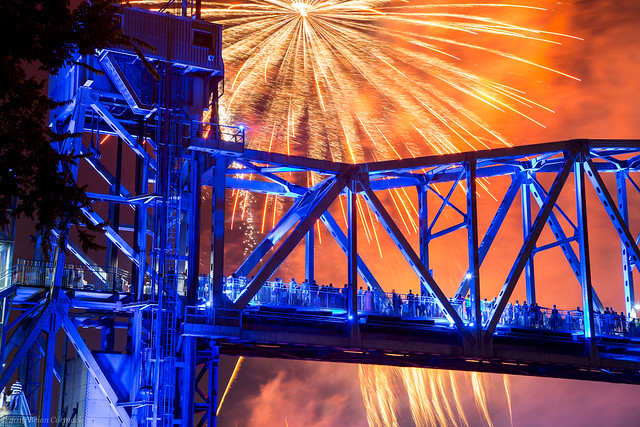