On Sunday night I headed to downtown Little Rock with the idea of getting some pictures of....something.  I wandered the streets, trying to think of something new to get a picture of.   Little Rock is a nice place, but not that big, so it seems like new things to take pictures of are rare.  I eventually ended up at the Junction Bridge, and hoped that there might be something interesting to get a picture of, that hasn't been photographed a million times before.

So I walked along the landscaped grounds at the foot of the bridge, in the area they cleared out in honor of the actual "little rock" that doesn't really exist anymore.  There were some pretty flowers growing there, which maybe, just maybe, might look cool with the bridge in the background.  So the camera was set up, and I waited in the hot summer weather for it to get dark.  I took a few pictures, hoping that at least one would turn out sharp.  The exposures were getting longer as it got darker, and a slight breeze was blowing the flowers around.

Here's one that actually turned out: 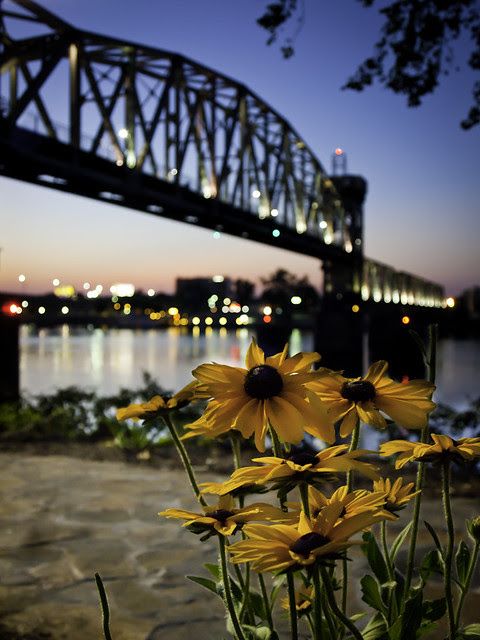 There were some interesting clouds on Monday night, which might end up making a decent sunset if they stuck around for a bit.  So around 8:00 I headed out to Two Rivers Bridge, and was more than thrilled to see some nice clouds in the sky.  It was already getting close to sunset, so I hurried to find a good spot.

I was a few minutes late, and got set up just before the sun dripped below the low hills next to Pinnacle Mountain: 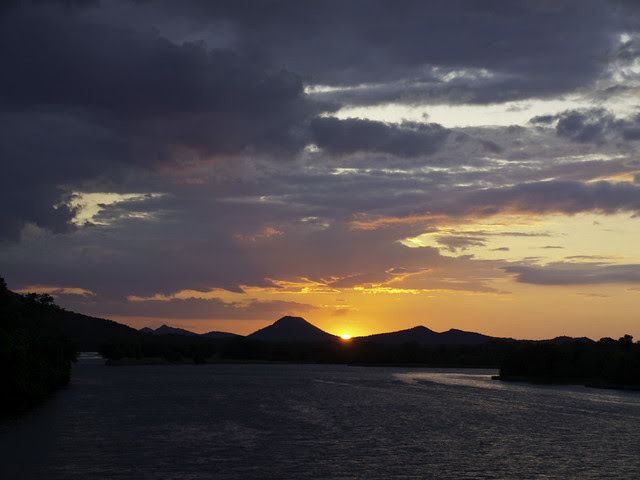 Which it was a nice sunset, but it's not the best sunset I've seen from this area.  This was taken from the Big Dam Bridge in 2007: 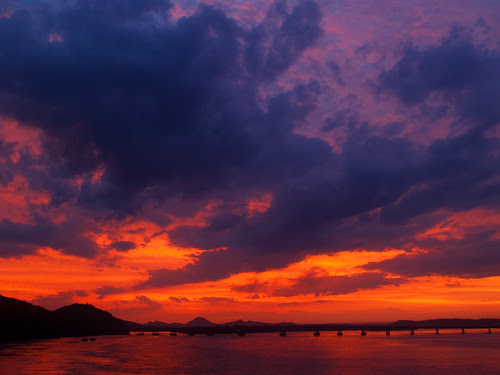 I stood out on the bridge for a bit, taking pictures as the light slowly drained away from the sky.  When most of the light was gone, I walked through the thick and muggy air to find a few spots to take pictures of the bridge.

Since my previous visit to Two Rivers, the landscaping around the base of the bridge has been finished.  It does look really nice, and also opens up some views of the bridge.  I sat at this one spot, near the parking lot, and waited for it to get dark.  Dusk settled in, but the lights on the bridge hadn't been turned on yet.  I sat and waited and waited, thinking of bad jokes about someone forgetting to pay the bill, or flip a switch somewhere. 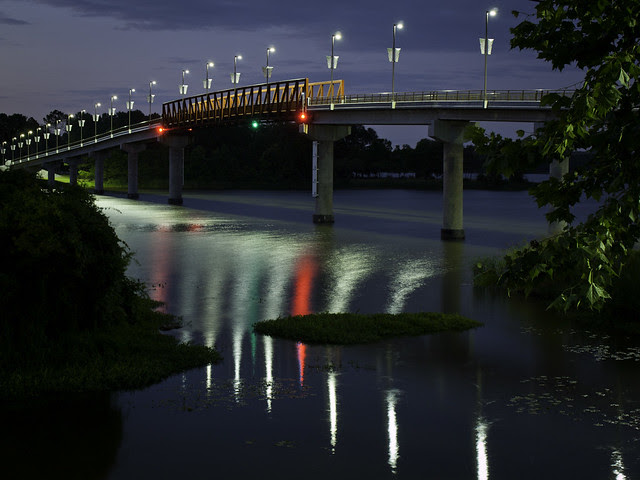 And a bit later, with the lights on: Posted by Cormackphotos at 9:29 PM No comments:

Well since the USA vs. Guatemala World Cup Qualifying match being played tonight isn't being shown on tv, it meant I wasn't distracted and got around to working on a few pictures taken late last night/early this morning.

So around 11:45 last night, several flashes of light began to light up the window of my apartment. I'm not famous enough to be stalked by paparazzi, so it meant that a storm was brewing outside. I went to the balcony and saw the sky being absolutely lit up by flashes of lightning. Which proved to be a dilemma - do I go to bed now (my alarm clock goes of at 6:40), or head out to take pictures of the storm? Of course I made the most logical choice, and grabbed the camera.

I hurried to the Big Dam Bridge, which I thought might make a good location for some pictures. The storm was still strong, but wasn't all that close. It wasn't even raining when I got to the bridge.

Game update: Managed to find an online stream of the game, which may or may not be legal. I'm sure hundreds of viruses are being downloaded to my computer now. First half, 0-0.

Anyways, the storm was a bit too far south and most of the lightning was obscured by clouds. But I managed to get a few good shots of lightning, after standing out there for about 45 minutes. This is probably the best one: 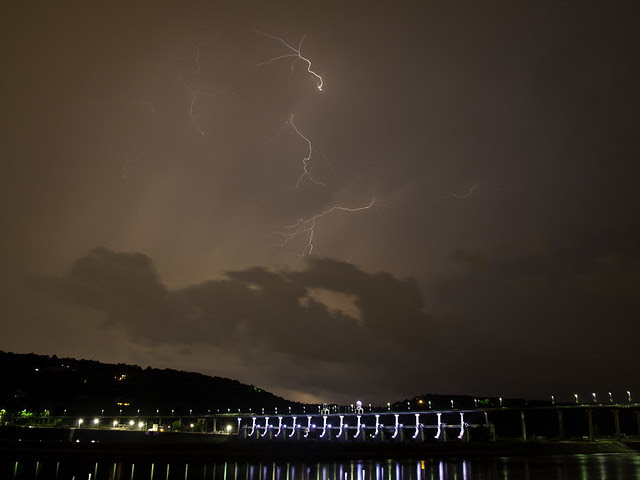 Most of the storm had passed by, so I thought it would be ok to head on home. Plus, I was being eaten alive by mosquitoes out there. Of course, when I got back to my place, I looked and saw even more lighting. But my needing to be at work at 7:30 meant that it'd be wise to call it a night. 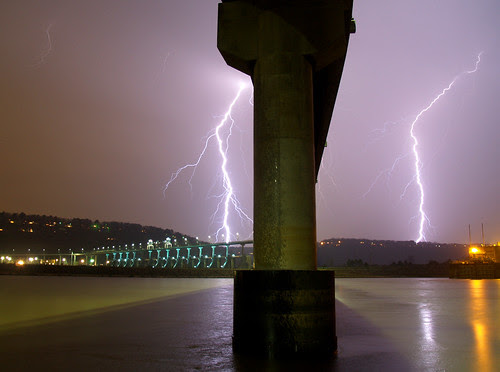 The worst thing about watching dodgy streams of international soccer games are the annoying ads placed over the screen.  There was one just now for "Russian Girls Love Americans."  I apologize to the future Ms. Cormack if she's in Moscow right now, but I didn't click on the ad.

OK, time to sign out and watch the game.  Adios!

Update:  I had countless viruses downloaded to my computer, had my bank account mysteriously emptied, and the game ended with the USA drawing 1-1 with Guatemala.
Posted by Cormackphotos at 8:42 PM No comments:

On Saturday night I headed back to downtown Little Rock with the camera.  I decided to visit a parking deck on Main Street that offers some fairly decent views of the city.  The view shows off a few of the older buildings that haven't yet been torn down on Main, and a nice selection of the taller skyscrapers.  The store right on the corner of 3rd and Main is Bennett's Military Supplies, which has been around since 1870.  Besides having some good camping supplies there, Bennett's is a pretty unique store.  Not very many store displays feature mannequins holding rocket launchers. 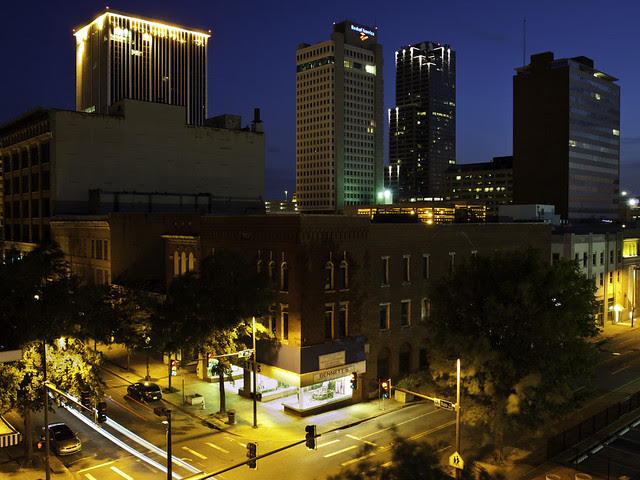 After it began to get too dark, I headed back to the car. But first I stopped and got this shot of the old Centre Place Building (built in 1917) and the dome of the state capitol. 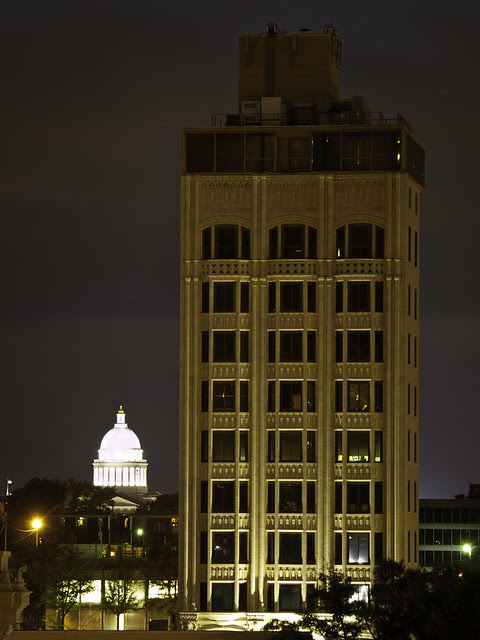 Posted by Cormackphotos at 9:06 PM No comments:

Took a vacation day from work on Friday and headed up to the Buffalo River for a camping/float trip with my cousin.  Despite how miserably hot it's been here so far this year, the weekend actually looked promising.  It would actually be on the cool side up in the Ozarks - highs in the 80s during the day.  The timing couldn't have been better.

The only problem was that every other person around who wanted to float the river also had the same idea.  And with all the dry weather, there was really only one area that had enough water to float.  So we headed up to Buffalo Point, and found the campground already full by the time we arrived Friday afternoon.  Luckily, in one of those wacky "small-world" type things, my cousin knew someone camping up there who let us borrow part of their campsite.  Crisis averted.

While setting up our tent, a light rain began to fall.  It would rain off and on for the rest of the night, which really cooled things off.  It was actually a bit chilly that night.  I hoped that the rain would create some early morning fog on the river, so I dragged myself out of my sleeping bed around 6:00 on Saturday and headed down to the river.  There was no fog, but I took a few pictures of the quiet river.  These were some canoes still lined up along the shore: 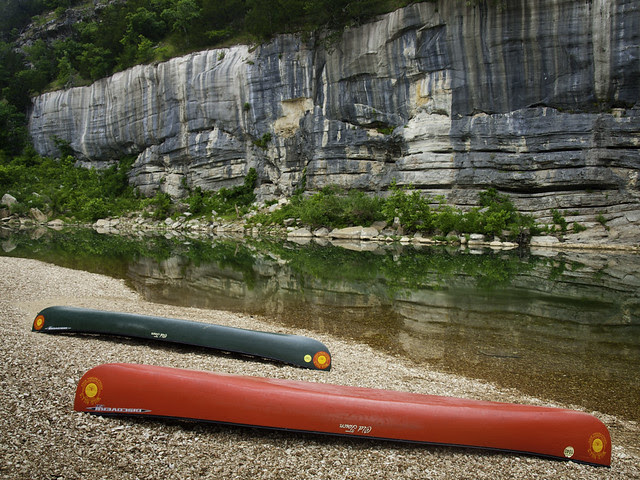 Later on that day we joined the crowds of people who were floating the river. I was pleasantly surprised that there was still a decent amount of water in the river (although we did have to drag the canoe a few times). I wasn't brave enough to take my camera onto the canoe, since I was sure that it would end up falling into the river. But it was a great day on the water. I even managed to not get horribly sunburned, which tends to happen on float trips.

On Sunday morning, we awoke to thunderstorms.  There is something really peaceful about listening to the soft patter of rain hitting the tent.  Until, of course, the tent starts leaking.  And also when a stray bolt of lightning hits uncomfortably close to the campground.  Pretty quickly, we were both awake and starting to strike down the tent.

After clearing the campsite, we headed out to visit the old ghost town of Rush, along the Buffalo River.  It's located only about 20 miles or so from Buffalo Point.  It's an interesting place to visit, a series of old buildings that are the remnants of an old mining town. 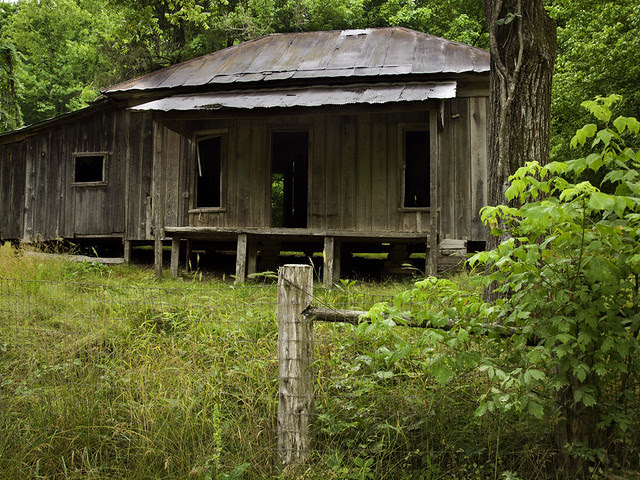 Zinc was discovered in the hills around Rush in the late 1800s, and mining soon began here.  Rush grew to it's largest population during World War I, when nearly 5,000 people are thought to have lived and worked there. 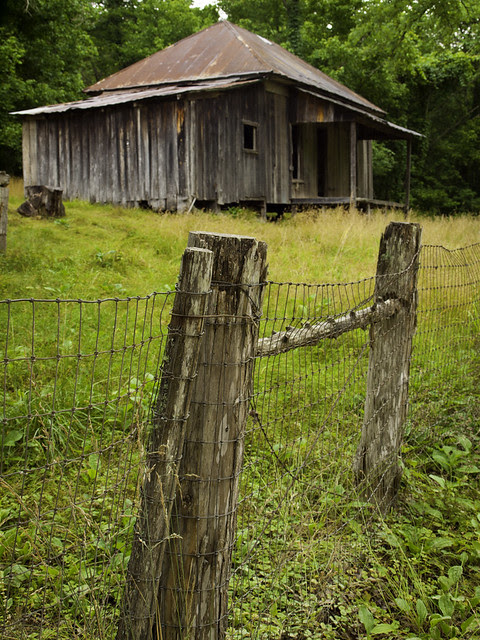 Today, most of the buildings are gone.  A few old homes sit along the road leading into Rush, surrounded with fences to prevent people from going in and damaging the buildings. 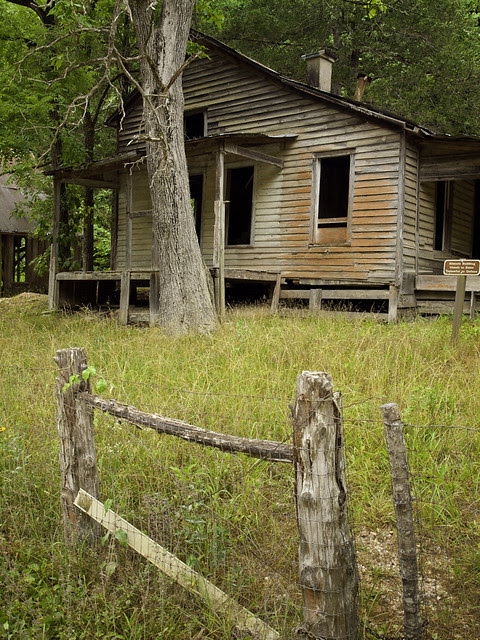 At the end of World War I, the zinc market bottomed out. The mines were eventually closed and abandoned. Although a few people stayed at Rush, the population dwindled away. The post office closed in the 1960s. 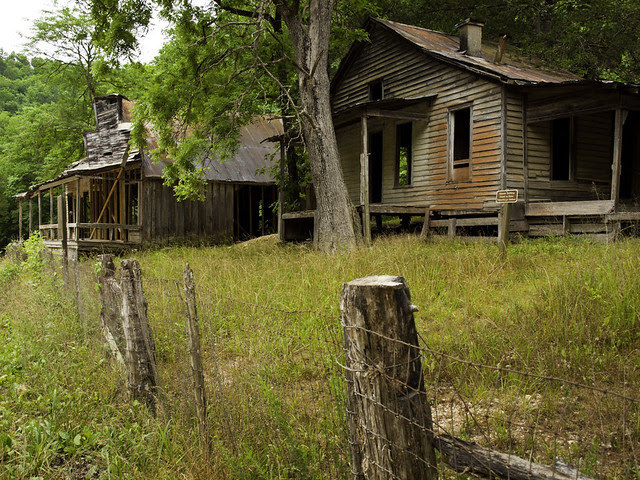 This is a view of part of old Rush, from a nearby trail. This is the old Taylor-Medley Store, which was the town's general store and post office. It closed down in 1956. You can see some new wooden beams in the old store, which look like they were recently installed. Luckily it looks like the Park Service is working to prevent the old building from collapsing (which it kinda looks like it's pretty close to doing).

After that we headed back home.  The storms had moved out, and it became hot and sunny.  It was 64 degrees at Buffalo Point that morning.  But when I got home to my apartment in Little Rock, it was a muggy 99 degrees.  I think I prefer the cooler weather at the river.  So much, that I'm already daydreaming about another camping trip....
Posted by Cormackphotos at 9:59 PM No comments: