I had a free night and headed to downtown Little Rock to take a few pictures. I ended up at the Junction Bridge, a spot where I've taken a ton of pictures at before. But not many with the new camera! This is one of my favorite places to take pictures at in Little Rock, and it has one of the best views of the skyline. 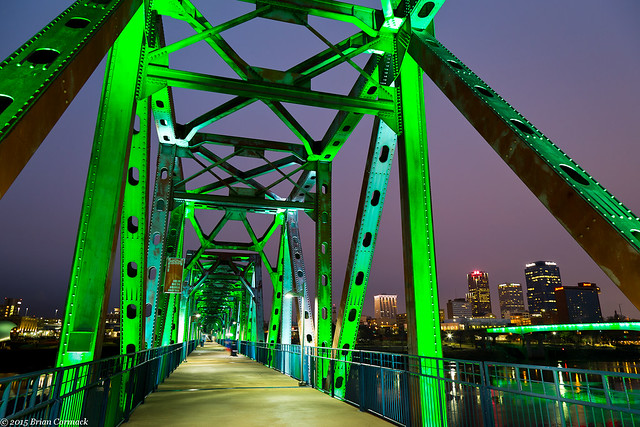 The lights on the bridges were green for St. Patrick's Day. 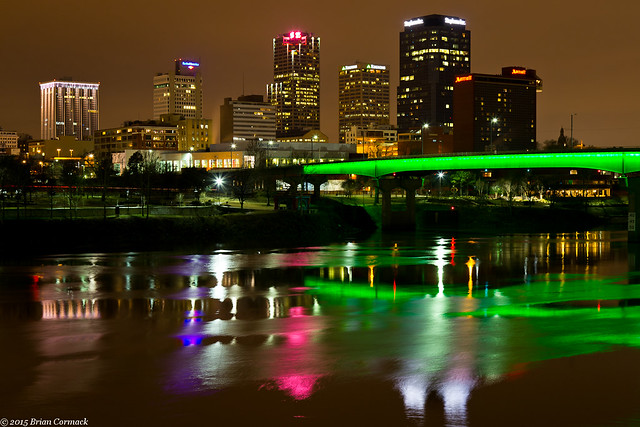 I drove over to MacArthur Park and got a few pictures of the old Arsenal Building. The building was constructed in 1840 and is one of the oldest buildings in the city. It is now a military history museum. 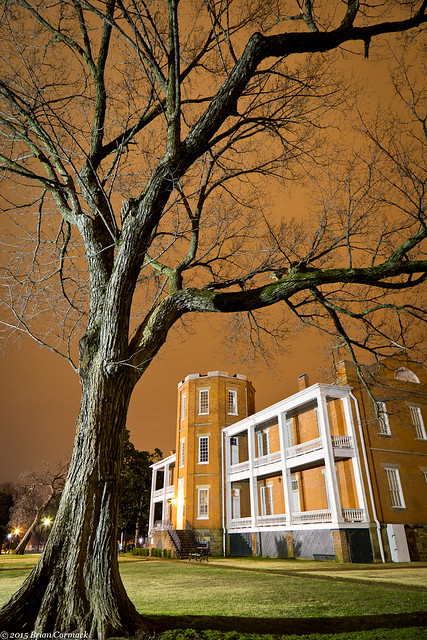 Posted by Cormackphotos at 10:40 PM No comments:

I’ve spent most of March trying to get one picture to come out right – star trails above an old church near Scott. It’s a neat old church, but it’s not in the best of shape now. 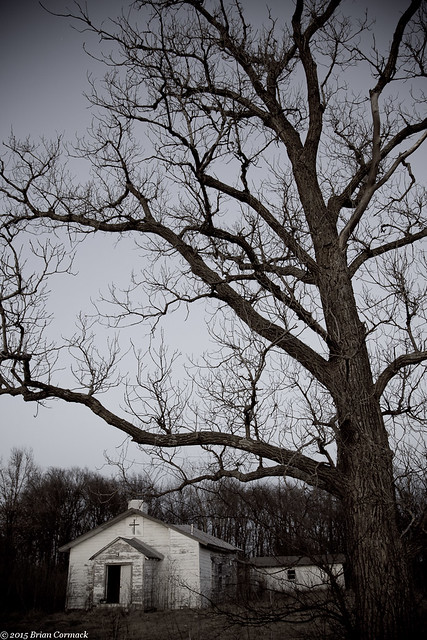 The roof is drooping, the insides have been trashed and the doors and windows are broken and open to the elements. The old church, probably once filled during weddings and services, probably won’t be around for much longer. Soon it may be another victim of gravity, neglect or bored idiots playing with matches. We’ve lost a lot of old buildings just like this one.

In Pine Bluff, several of the old abandoned buildings along Main Street have collapsed after decades of neglect. All that remains of many are piles of rubble.
Gone: 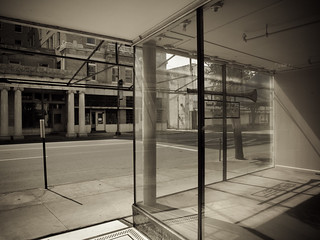 And in the nearby town of England, there is a another church that I’ve taken a few pictures of over the years. It’s one that I was thinking of trying to get star trails at as well. But it’s been lost as well, torn down or burned. All that remains of it is just a bare patch of dirt.
Gone: 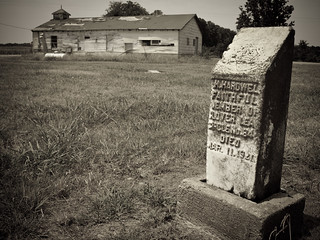 So I’ve been trying to get a good picture of this church with some star trails above it, while I still can. I’ve been out to the church three times in March, thanks to a wacky comedy of errors on the first two trips. On visit #1, I headed out there a few days after our last snow. There was a full moon, and I hoped the last bits of snow on the ground would reflect the moonlight. By the time I drove out there, I saw that most of the snow had melted. I set up the camera anyways, only for a stream of low clouds to start rolling through.

The weather had predicted that the clouds would move out and the skies would clear, but they didn’t. Which is fine, except that clouds do a fairly good job of covering up stars. Here is one of the shots from that night, as clouds streak across the sky above the church. 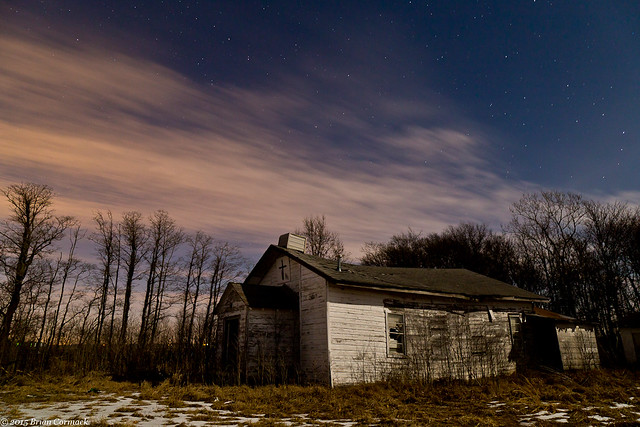 And a time-lapse video with all of the shots from the night, this is about 200 pictures representing about two hours.

So a few days later, on the next clear night, I drove back out to Scott. I set up the camera and started taking pictures. Unfortunately, nothing turned out from that trip. The first mistake I made was not getting the camera settings correct, so most of the shots I took out there were too dark. The next problem was that the camera fogged up after about twenty minutes, which isn’t good. But it didn’t really matter anyways. When I left the house I managed to not grab the two fully charged batteries, instead getting one that hadn’t been charged. So after about an hour, the camera died.

I started to feel a little desperate when I headed back out there on the next clear night for attempt #3. This time I was prepared. Or as prepared as I could be. All the batteries were charged, the settings were double-checked. I even researched ways to prevent lens fogging, which worked even it wasn’t the fanciest method (it was two handwarmers stuck in a sock, which was wrapped around the lens). I got to the church after dark, set everything up again, and started taking pictures.

This church is pretty much located way out in the middle of some flat fields, in the middle of nowhere. Nothing bothered me the first two times I was there, but this trip I began to get a little creeped out. The abandoned church would be the perfect setting for an attack by some sort of ghost, evil spirit or serial killer.

One time I went to check on the camera and heard some dogs (or coyotes?) out in the distance. They were yipping or howling, but in the dark it eerily sounded like a baby crying. It freaked me out a little and I hurried back to the car. I began to let my imagination get to me. Is that distant light (from a deranged killer’s flashlight?!) getting closer? Oh no, it’s a street light that’s a half mile away. And it’s not moving. Is that something creepy lurking in the grass behind the camera, ready to strike? Is that a person sneaking around in the brush? No, just a rabbit or a possum moving around (or a skunk, which was probably the scariest thing out there).

But I survived, and after two hours went to the check on the camera. Everything finally came out ok. The lens didn’t fog up, although the tripod legs were coated with dew. I ended up getting over two hundred pictures of the stars above the church, without any big clouds passing through. Finally! 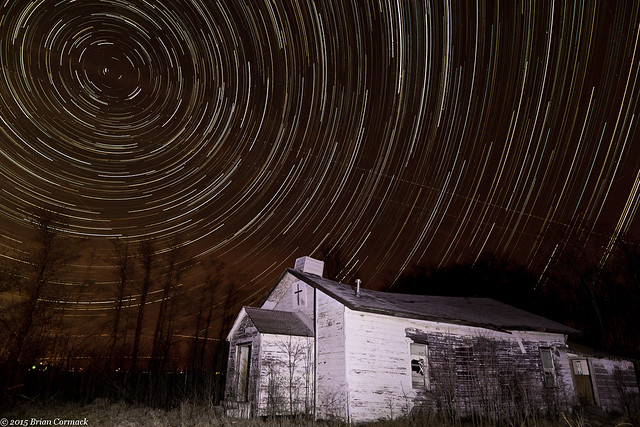 Posted by Cormackphotos at 10:21 PM No comments:

Zack and I headed back up into the Ozarks last weekend for a visit to a few more waterfalls. We had hoped that the recent rain and snows would have gotten the creeks up and running, and we headed out on a day that promised to be cloudy and cold. 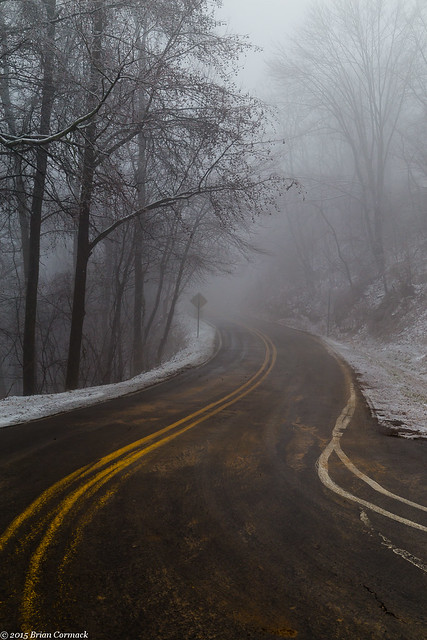 We were heading to Short Grotto Falls, a small waterfall in the Ozark National Forest near Clarksville. After driving several miles down some bumpy dirt roads (which were all covered in ice that day), you begin the hike to the falls. The hike is short, but steep as you head straight down a hill to the creek. The fun bonus that day was the steep hill was coated with a nice layer of ice and snow.

After sliding down the hill, we made it to Short Grotto Falls. The falls are small, only five feet, but they drop into an amazing little grotto. The sides of the grotto were covered with thick icicles. 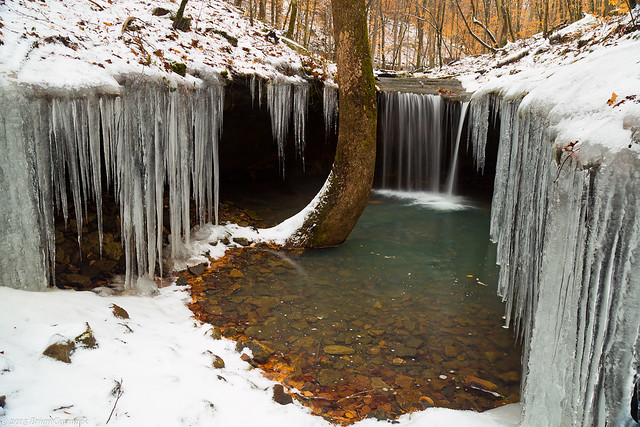 And the view from under the bluff, where there was just enough room to set up the tripod. 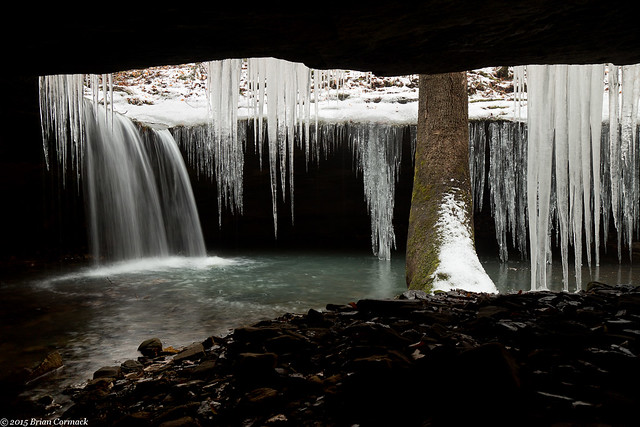 The creek that Short Grotto Falls is on also contains several other waterfalls, which were all a short hike away. After a few minutes of walking through the snow, we reached another falls. This is Amy Falls, which are about 37 feet tall. 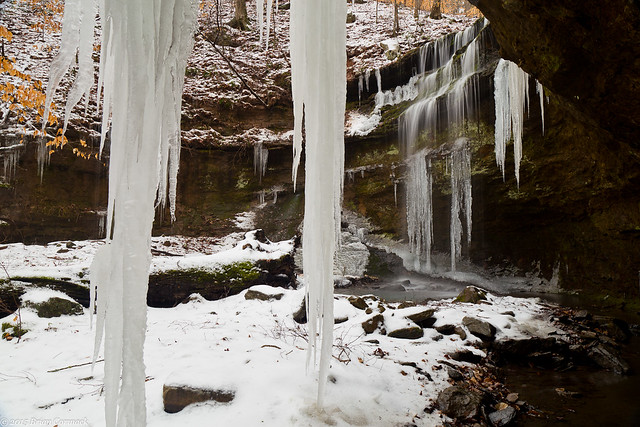 Would have maybe liked to have a bit more water in the falls, but oh well. 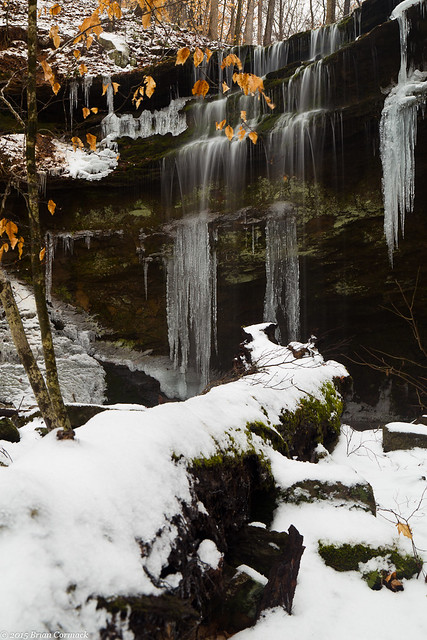 And a small drop on the creek by Amy Falls. This is a very scenic little creek, and it will be worth a return visit in the Spring. 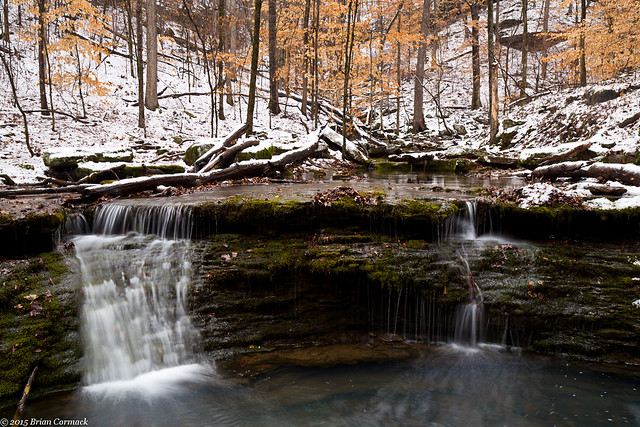 We headed to this waterfall, called Upper Engagement Hollow Falls. They're about 35 feet and along the same creek. 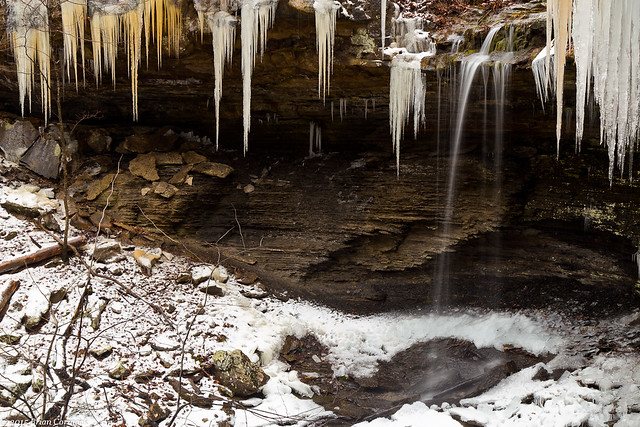 We then decided to slowly make our way back up to the car. Which was much easier said than done. There isn't an easy way to get back up the hill, the only option is a grueling bushwhack up the hillside. Which was, of course, covered in ice and snow. It was slow going, and I had just barely almost reached the top of the hill when I lost my footing on the ice. My feet shot out from under me and I began sliding down the hill. I went a few feet before hitting a small tree, which stopped my skid. My tripod, covered in snow and dirt, sled down the hill a few more feet before getting hung up as well. Which I was thrilled about, since I didn't want to hike back down the hill to retrieve it if it had gone all the way to the bottom.

We finally managed to get back to the car, and then drove around to do some exploring. While driving along a country road, we found another waterfall. It was a great one to visit, since it required absolutely no hiking at all. The waterfall is right on the side of the road. It's 18 feet, and was named 4290 Falls by Zack after the trip. It's always nice to visit one that doesn't require a hike, or at least, a trudge up a steep snowy hill. 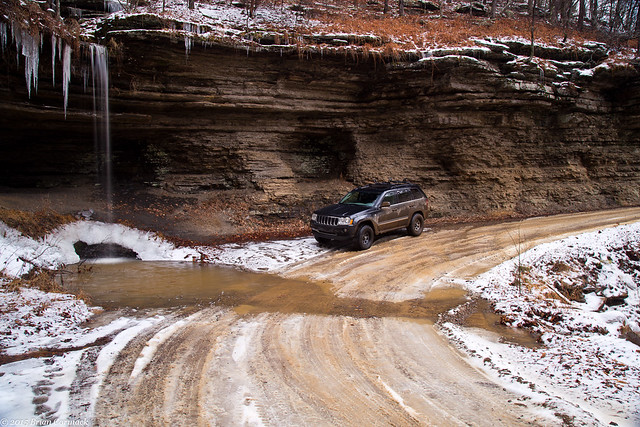 Further down the road we stopped at this creek for a few pictures. The small creek ran past this small bluff, which was adorned with a few icicles. We spent some time here taking pictures and then drove back home towards Little Rock. 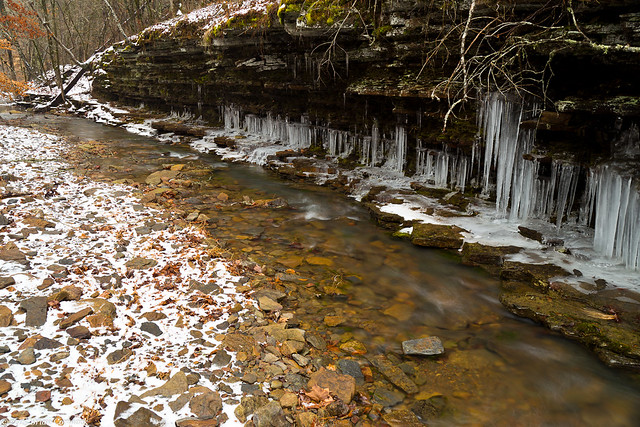 All of these waterfalls were found using Waterfalls.IO a great resource for waterfall hunting and exploring!
Posted by Cormackphotos at 10:02 PM 2 comments: