Next we made a quick visit to see how the color was down in Boxley Valley, which is easily one of the most scenic places in the Buffalo National River. We didn't see any of the elk, or the trumpeter swans, but there was some decent color. We stopped at a few places, including some old barns. There are a ton of old barns in Boxley Valley... 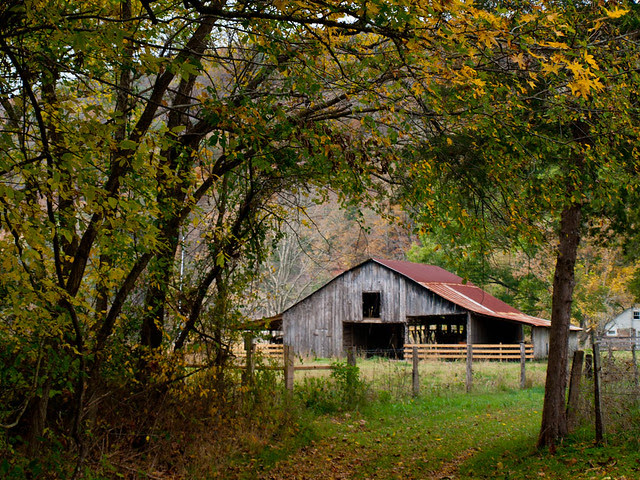 We also made a quick stop at the old Villines cabin, which sits along the main road through Boxley. 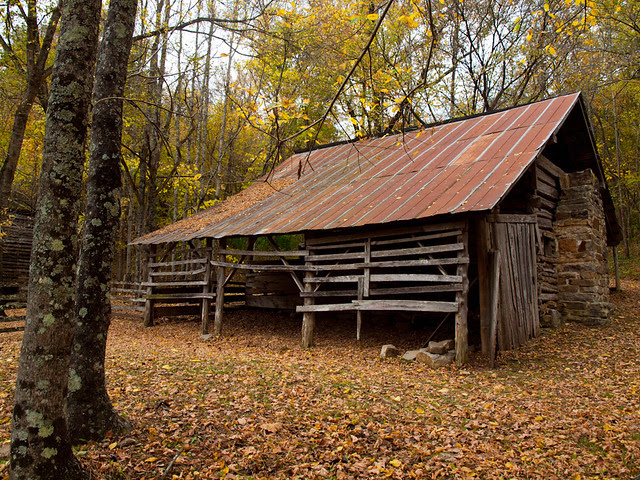 This is another neat place, built way back in 1850 by one of the first pioneer families to settle along the Buffalo River. The old home was converted into a barn many decades ago. I thought the old place was interesting, especially this old fence post with a patch of moss growing on the top: 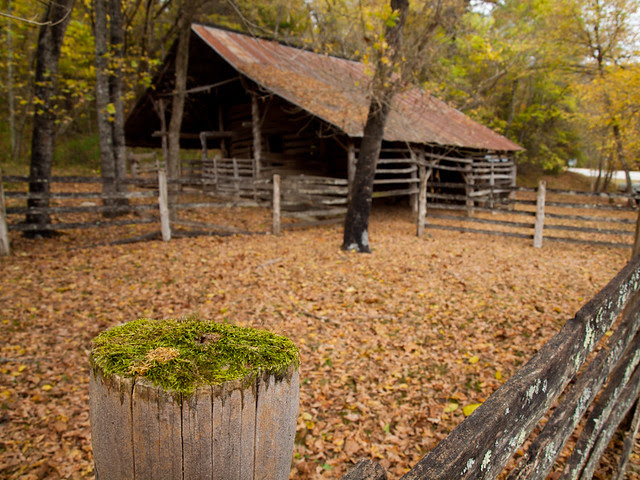 And one last shot from here: 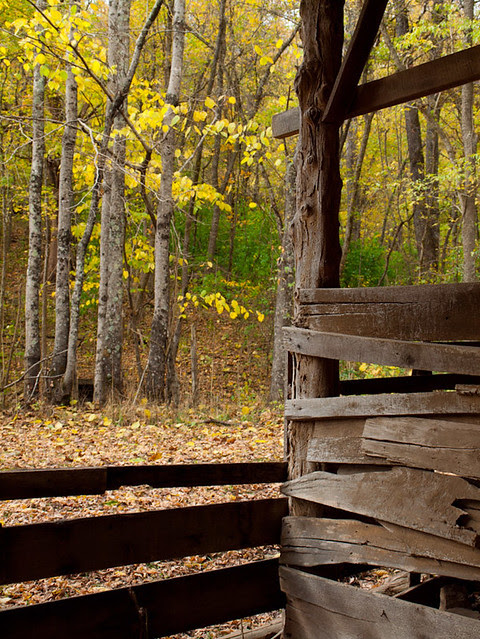 From there we traveled over to Kyle's Landing - a camping area and put-in along the Buffalo River. The dirt road heading in was a bit bumpy, and I was happy that we were in Clay's truck and not in my car...

The sun had come out, and was making the light in the photos a bit harsh. But we might as well have a look around since we made the drive down there... 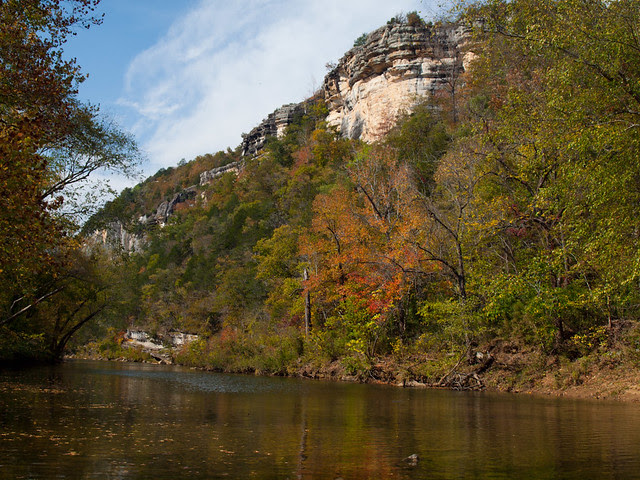 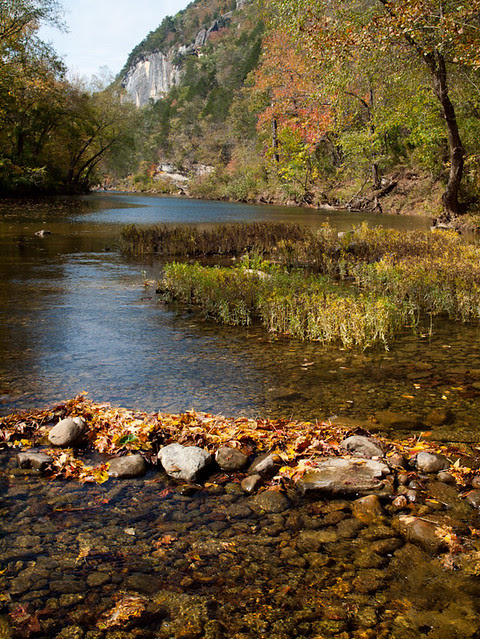 The water in the river is really low... 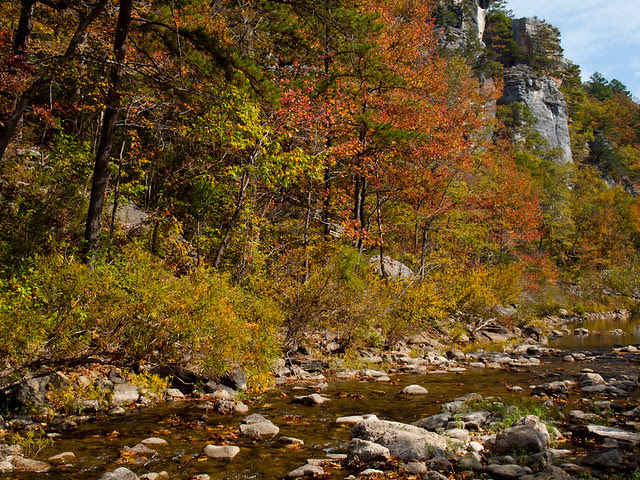 We made one last stop along the road out of Kyle's Landing in order to get pictures of this great old barn... 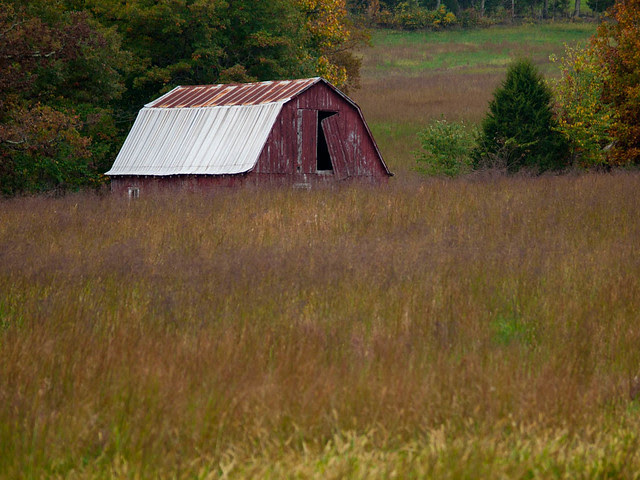 And then we got back onto the main road and headed down to Jasper for another traditional stop at the Ozark Cafe.
Posted by Cormackphotos at 10:39 PM 1 comment:

It was right at dawn as we headed down the steep road to the Steele Creek put-in along the Buffalo National River. The cloudy weather covered up any type of sunrise, but we headed down the hill and parked near the base of Roark Bluff.

Roark Bluff isn't the tallest bluff along the river, but it has to be one of the prettiest. It runs along a graceful curve of the river, overlooking a serene valley. I rode in with fellow photographers Matt Kennedy and Clay Wells, and our first goal of the day was to hike to the top of the bluff.

There is a spot along the bluff that overlooks the rest of the bluff line and the river. It's a spot that I've wanted to visit for a very long time, but I had never known how to get there. I realize now that my idea of reaching it was completely wrong, I thought you had to climb up in a completely different spot - which wasn't even on the same hillside that the bluff is on. Whoops.

We started out by crossing the Buffalo River, which was very easy since the river was low. Then you head up the hillside towards the bluff. There was a bit of a faint trail, and eventually we made it to the overlook. It is a beautiful spot, but a bit scary at the same time. You are standing on a piece of rock that is extending a few hundred feet above the river. It's not a place for anyone scared of heights.

There are a few different spots to set up your camera. If you are feeling very brave (and have good life insurance), there is a narrow fin of rock that extends further out above the river. It has barely enough room for a person to stand on. I wasn't brave enough to try, since I knew that I'd probably be the idiot who fell off.

We sat up there for a bit, drinking in the view. It was pretty amazing: 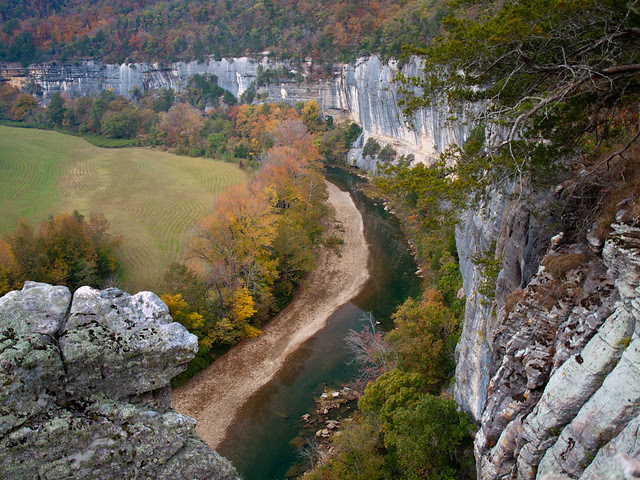 While perched on top of the bluff, we had a great view of the entire valley. We saw a caravan of cars drive down the hill and park. Then a large group of photographers came out and started making their way towards the river. It would turn out that this was a photography workshop being put on by Tim Ernst. His group moved down along the river, and we waved down at them. I jokingly said that one of us should moon them (we didn't).

After admiring the view for awhile, we headed down the hill to explore more of the river. There was some good fall color along the Buffalo, but most of the distant hillsides were still mostly green. 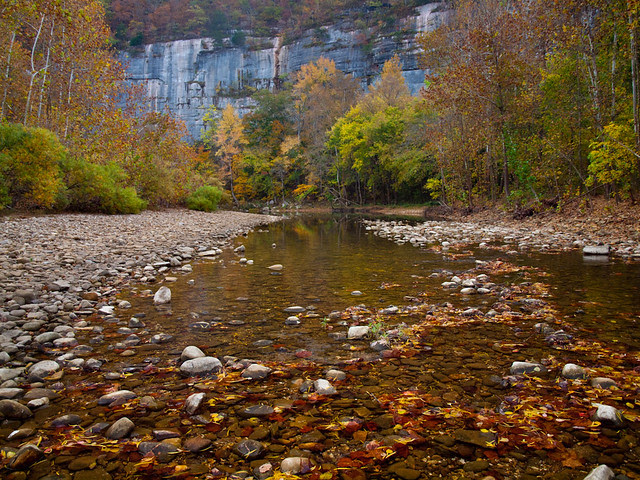 I was amazed at how low the river was, you can definitely tell that we haven't gotten much rain lately. The stream in this picture is the entire Buffalo River (it must run a bit underground in this section). 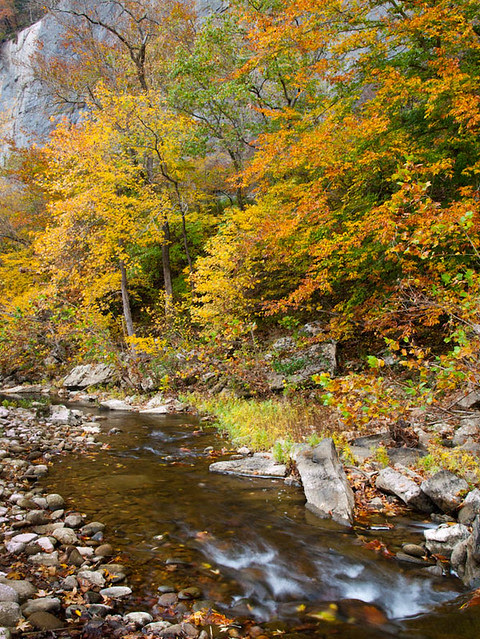 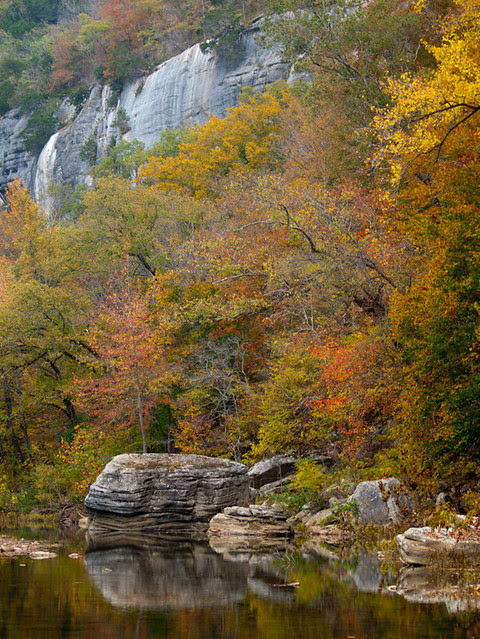 And one last shot of the Buffalo River from Steele Creek. There was a large number of fallen leaves piled up in the still waters of the river... From there we got in the car and headed off towards Boxley Valley...
Posted by Cormackphotos at 9:42 PM No comments:

I headed out to visit the Big Dam Bridge one night last week after work. One sure sign that the season has finally changed is the fact that it gets dark earlier now. It won't be too long when the sun will be setting right in the middle of my commute home from work.

But this is a view of dusk settling in over the Big Dam Bridge. This was taken from the north side, on a cool and pleasant evening along the Arkansas River... 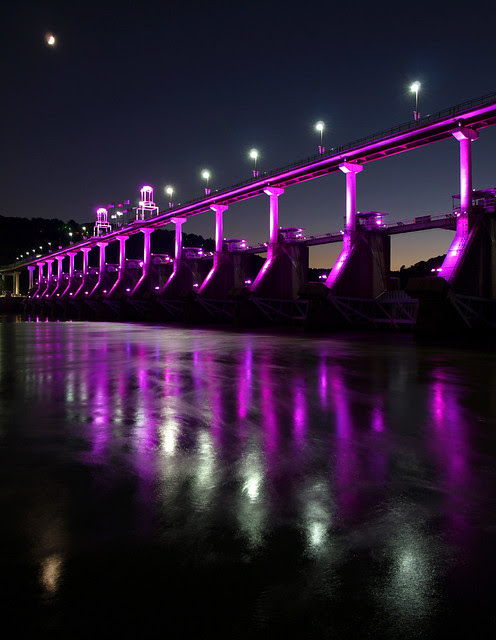 Posted by Cormackphotos at 10:46 PM No comments:

Last weekend I headed back down to Texas to catch the last home-game of my beloved FC Dallas. They were playing against the Colorado Rapids, which ranks as one of my least-favorite Major League Soccer teams (along with Houston, DC and Chicago).

I didn't get many pictures of the game - I ended up watching it too closely instead of trying to take pictures. They probably wouldn't have turned out anyways because we weren't sitting close enough to the field, we were perched in the "beer garden" instead.

The game ended in a 2-2 draw. It could have been better, like say if Dallas won. But the tie extended FC Dallas' unbeaten streak to 19 games, which set the Major League Soccer record for longest unbeaten streak in a single season. The last time Dallas lost was in May to LA.

This is a shot taken right after the game ended, from our spot in the beer garden: 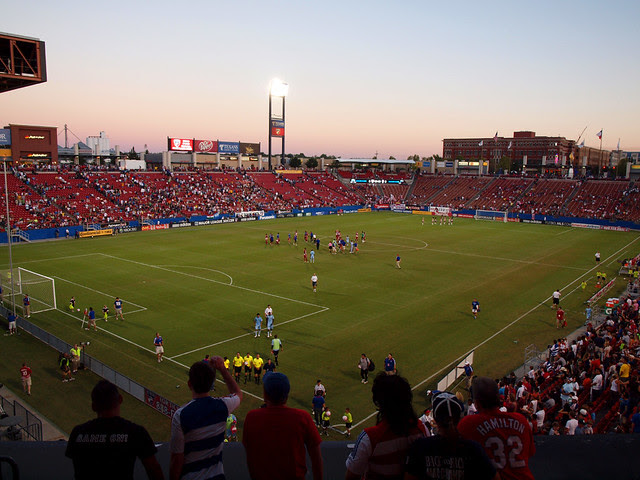