While I was out taking pictures around Scott and Keo, I made a quick visit to a neat old oxbow lake that I had randomly stumbled on while driving around back in May. It's a neat little lake, especially since it is absolutely filled to the brim with thousands of water tupelo trees. 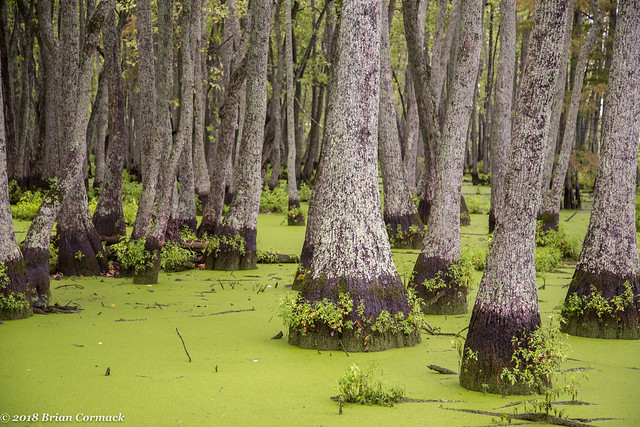 Looking at the map, I'm guessing that the oxbow lake was once part of the Arkansas River (maybe?). This is all a guess - I can't even find out what the name of the lake is.

What looks like algae in the lake is actually a tiny plant called duckweed (or Lemnoideae if you want to be fancy). Duckweed is an aquatic plant that floats on or just below the surface, and it thrives in slow-moving bodies of water like this lake. 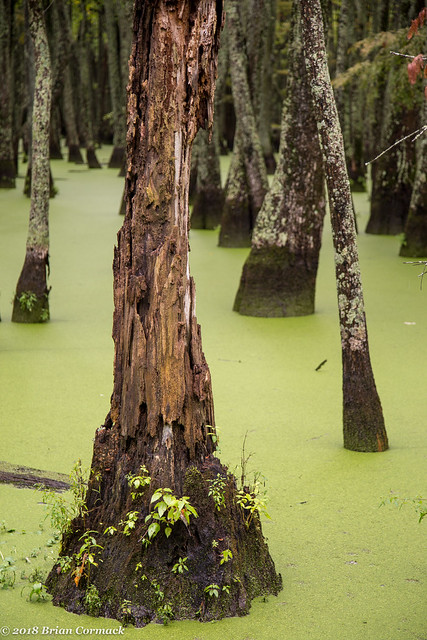 Duckweed can be a nuisance, since it grows rapidly and can quickly overtake a pond. But it has some benefits. Scientists are utilizing it as a new source of biofuel, and farmers are using it as a food source for tilapia. Duckweed is also great at removing pollutants, making it a good way to filter water. 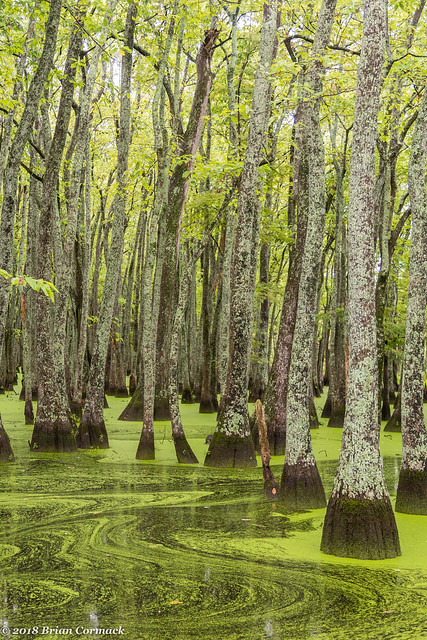 My favorite thing about duckweed is that it covers the surface of water like a carpet, which prevents mosquitoes from laying eggs in the still water. I wasn't bothered by any mosquitoes while I was there, which is an amazing statement to make when you're outside in the Delta. 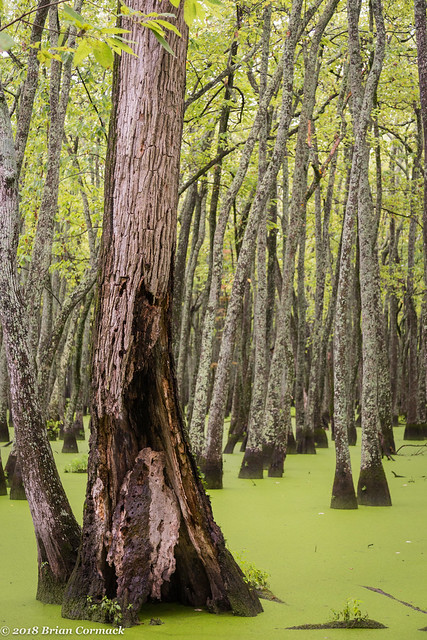 The Delta On A Rainy Day

Last Saturday it poured down heavy rain, with a little flash flooding in some areas. Which probably wasn’t the best weather to be out taking pictures, but I was foolish enough to head out into the storm with my camera (which managed to somehow stay reasonably dry all day). I headed out to the flat Delta lands around the towns of Scott and Keo, trying to hopefully get some pictures of some neat old buildings. I had done some searching on Google Maps looking for stuff to get pictures of, and managed to find six places I wanted to visit. But of course, half of those places were busts.

But I did manage to find a few neat old churches which have been left abandoned. The first was near Scott, which is neat little town with all sorts of interesting old historic buildings. This church was along a bumpy dirt road, surrounded by fields. The front door was open, welcoming in the heavy rain. 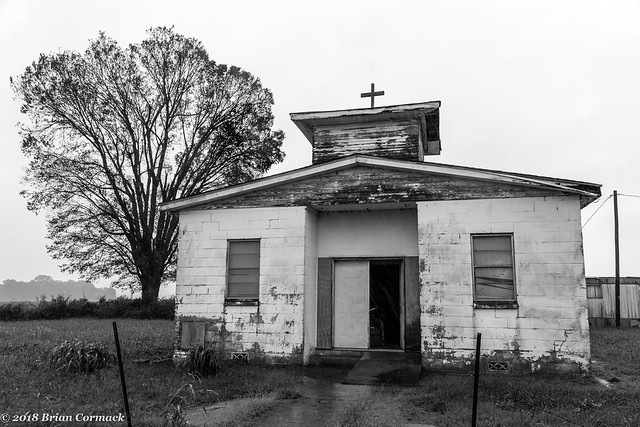 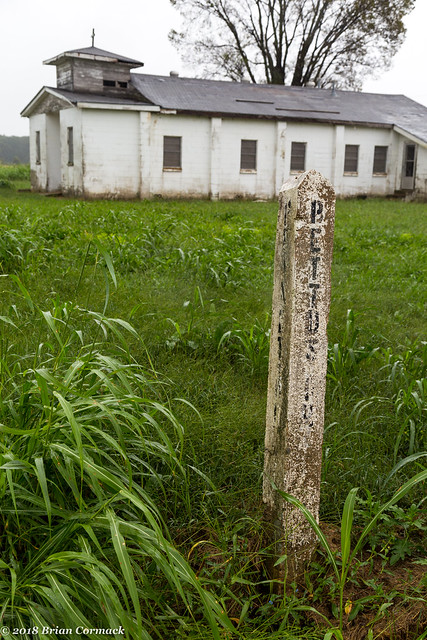 I headed south as the rain poured down, the water collecting and overflowing in the creeks and ditches alongside the road. 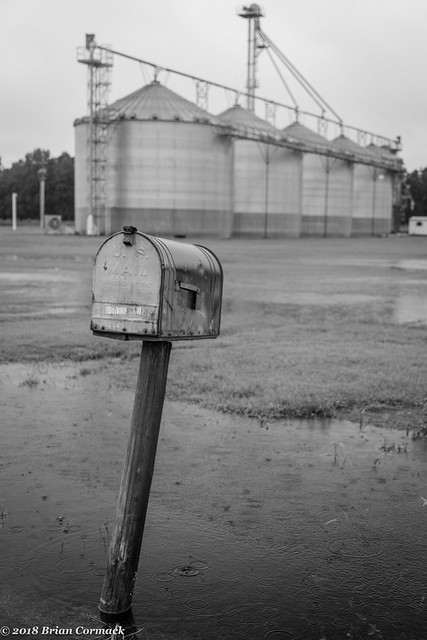 After sliding around on a muddy dirt road I eventually found this other old church, which also sat empty and abandoned (although someone is still kind enough to mow the grass around it). 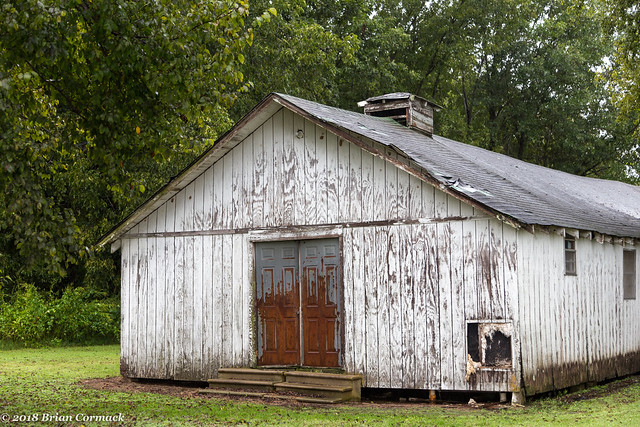 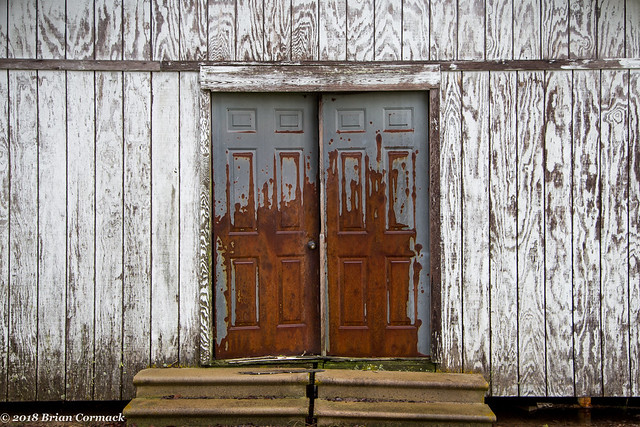 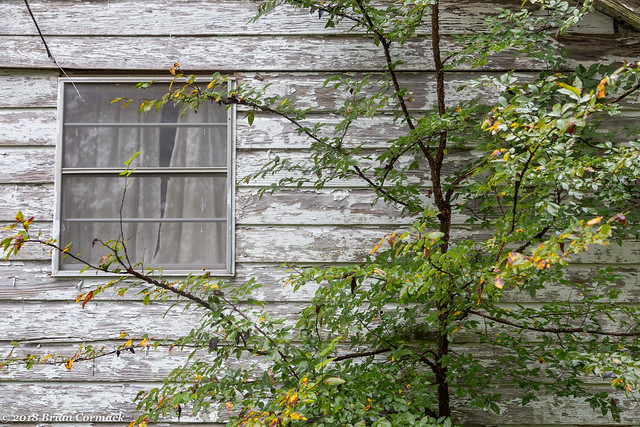 The rain began to slack off a bit, although the landscape was still soaked. I drove by this old road and stopped for a picture (I definitely didn't drive down it - my old car would have gotten immediately stuck in the mud there). 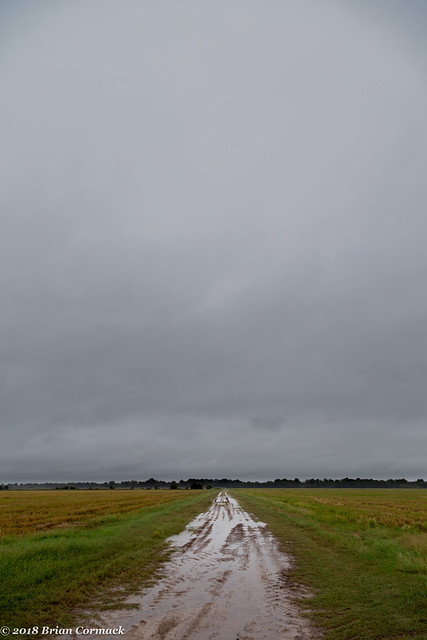 Further south was another church, but this one was actually much harder to find. While it was located right alongside the road, it was almost entirely hidden by trees and brush. 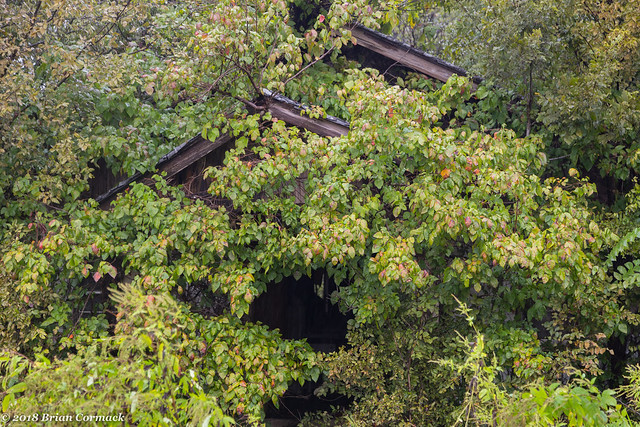 I tried to get closer to the church, which wasn't easy since the church was nearly cocooned by massive vines of poison ivy. And if you look closely at the top of the window, there is massive wasp nest. Luckily that congregation had already left and didn't attack anyone trying to get too close to the old building. 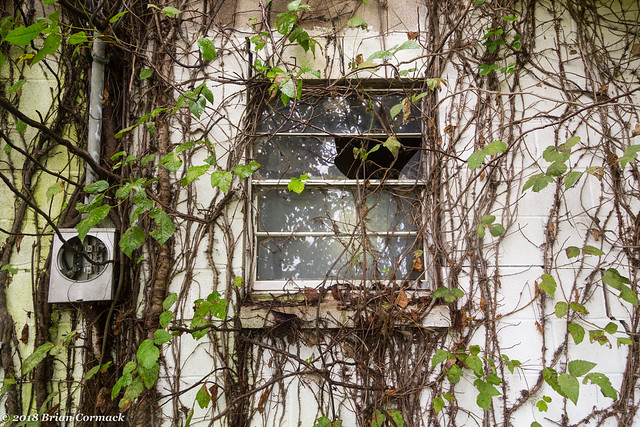 However, I didn't manage to escape unscathed. I got a little too close to the poison ivy here, which is making my arm itch now just typing this.
Posted by Cormackphotos at 10:44 PM No comments:

The other day we took a little break from toddler potty training and visited Pinnacle Mountain State Park. We went on the Arkansas Arboretum Trail, which is a great little trail. It's short (only 3/4 of a mile) and very kid-friendly. The trail loops through the woods, visiting trees that grow in all six geographic regions of the state. The trail succeeded in tiring out Jonah, who seemed to run out of energy sometime around the Ouachitas. 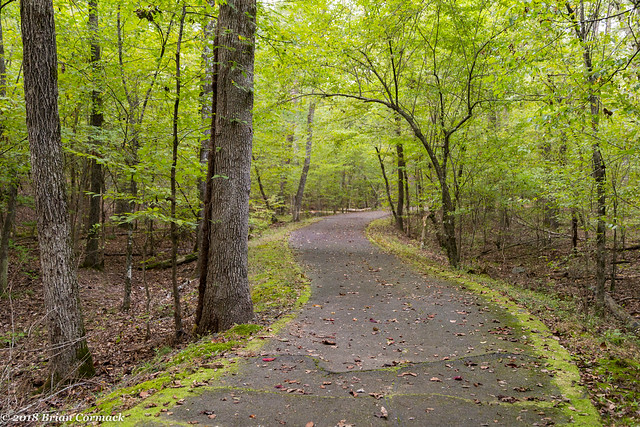 At the beginning of the hike, I managed to catch a few shots of Jonah (which isn't always easy, toddlers aren't the most interested in posing for pictures). 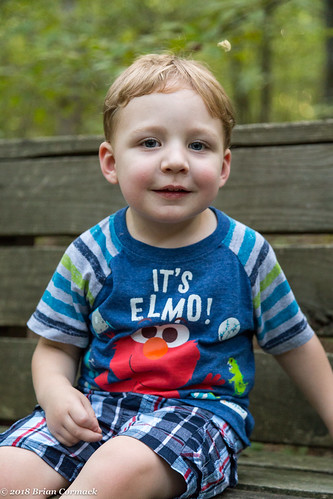 I headed across the river to a spot along Riverfront Park in North Little Rock, which provides one of the best views of downtown Little Rock. It had been cloudy and rainy all day, but the clouds began to break up right after sunset. The sky that was barely visible through the clouds turned a darker shade of blue as the dusk settled in, and the remaining clouds began to reflect back the golden hue of the city lights below. 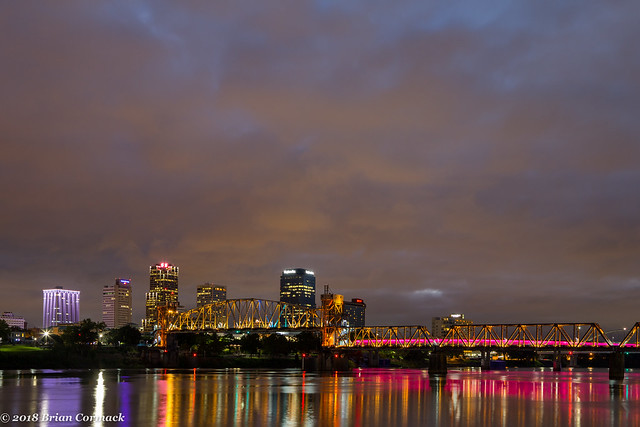 I headed back across the river and went to the other side of downtown, along a hill overlooking I-630. It was a few hours past rush hour, but there was still some traffic cruising by along the freeway. 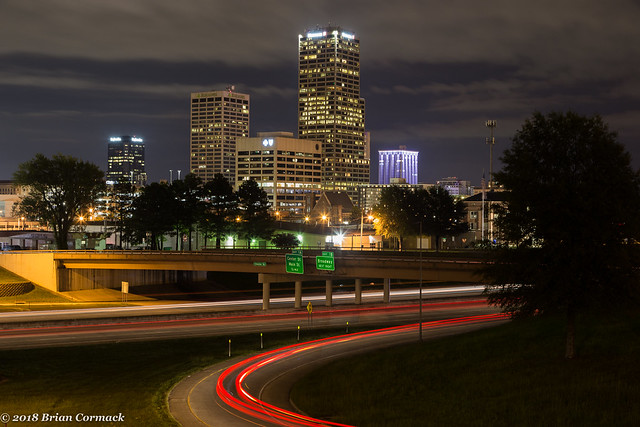 One of the most popular parts of the parkland surrounding the Clinton Presidential Library is the old rail bridge that was built in 1899 and then converted into a pedestrian bridge in 2011. That bridge has some company now - a newer (but much smaller) bridge was recently built in the shadow of the Clinton Library and the Clinton Park Bridge. The bridge connects to an island in the Arkansas River, which will soon be fully converted into more park space. From the bridge you do get a pretty good view looking up a the Presidential Library. 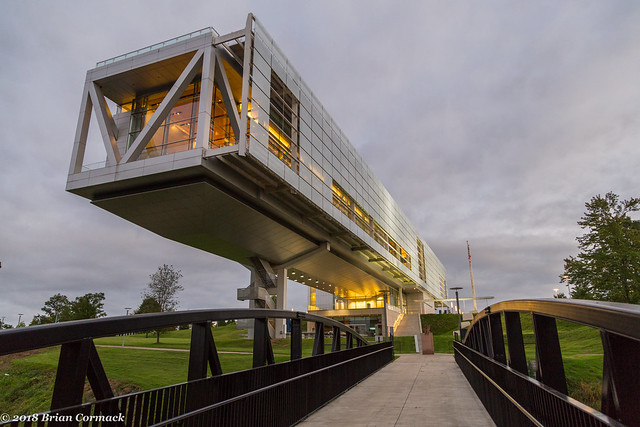 There has been a lot of change on Main Street in Little Rock over the years. It used to be the premier shopping destination in the state, but the rise of suburban malls and the slow death of downtown soon left Main an empty strip of abandoned buildings. Thankfully things have changed for the better, with new restaurants and the Technology Park setting up shop along Main.

One little detail along Main Street that has been witness to the slow demise and regrowth of Main Street is an old clock, which has sat at the intersection of Main and Capitol for decades. The clock was installed by Cave's Jewelry Store, which opened in the 1930s. The clock was refurbished by the Downtown Little Rock Partnership, and it operates yet again. At night, the neon lights shine just like it did in the olden days (it was a few minutes slow when this was taken one night just before sunset). 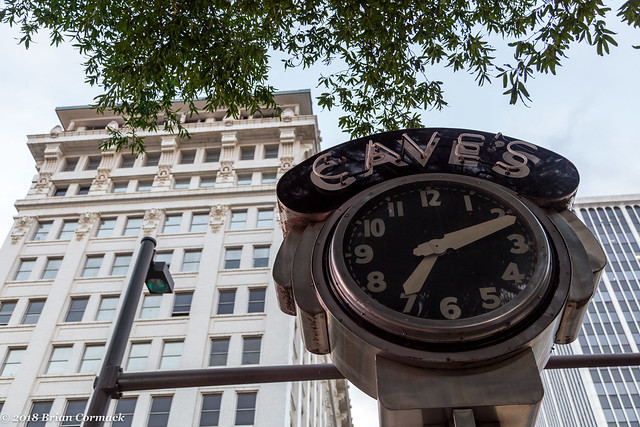 While driving home from the Buffalo River, I saw this old Plymouth car parked along the side of Hwy. 65. I can't really tell how old the car is, but I'm guessing it's probably from the 30s or 40s. Old cars like this are fascinating to me. Where did it come from? Who once owned it? Why was it left in this place? Was it abandoned here because the driver was too scared to drive through the speed traps in the nearby town of Damascus? 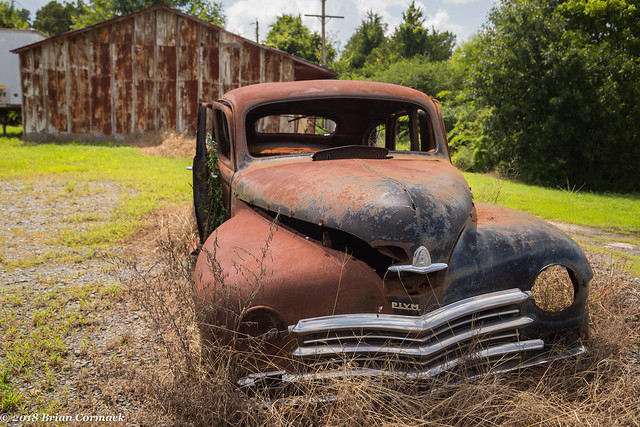 Posted by Cormackphotos at 9:31 PM No comments:

You would never guess now, but there used to be a sprawling town of 5,000 people located right along the Buffalo River. The town of Rush was established after zinc was discovered here in the 1880s, leading to the establishment of several mines. The town was the most prosperous during World War I, when the mines were running full-tilt to produce zinc for the war effort. At that time, Rush was recognized as the most prosperous city per capita in Arkansas. 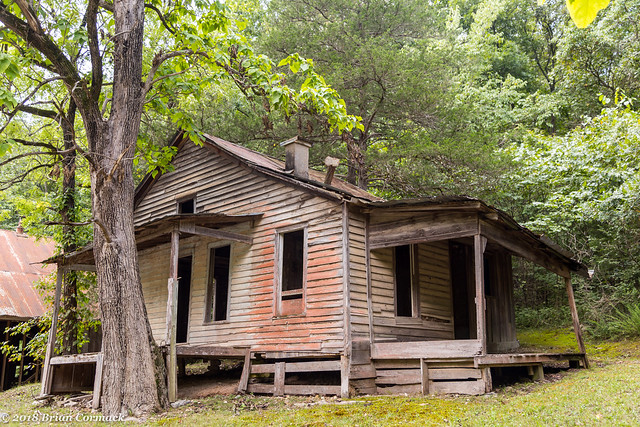 After the war ended, so did the demand for zinc. Most of the mines began to close, and the population of Rush slowly dwindled away. The post office closed in 1960, and the town was officially deserted when the land became part of the National Park Service in 1972. 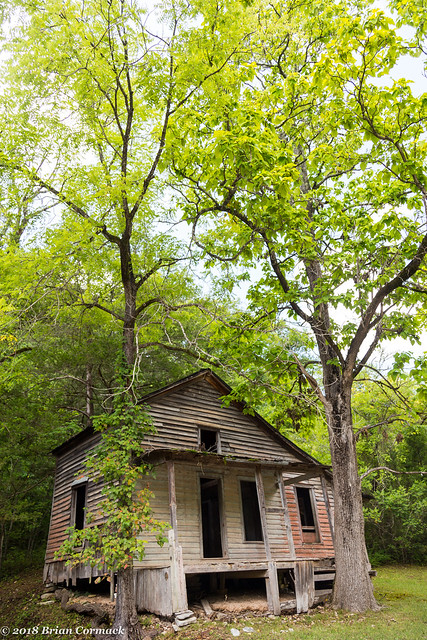 All that remains are the mines (which are blocked off for safety) and a few buildings. Most of the buildings are old and fragile, and have been fenced off to keep people from going inside. Unfortunately one of the buildings has gotten some recent damage, when an apparent drunk-driver crashed into it while heading down the road.

Rush is now one of the last places to put in or out of the river, before it heads in to a designated wilderness area. It's popular spot, although the activity and population has changed dramatically in the last century. 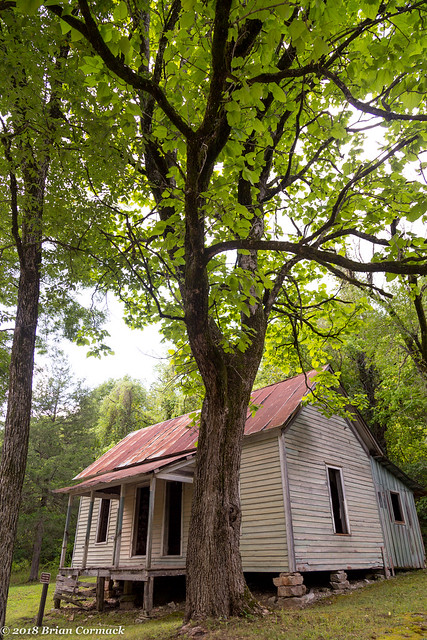