So how was your weekend? Mine was great, thanks for asking. It is a good day when you find yourself out in the woods, but every once in awhile everything comes together and is just about perfect. Early last week I had made some plans to head up to the Buffalo River on Saturday: leave LR, go up Highway 7 to the River, head west to Steel Creek, look at the cool bluffs there, continue west to Boxley Valley and go hike the Hawksbill Crag trail, then make it back down into the valley around dusk when the elk are out in the fields there. Then, once it gets too dark, head back home and be back in time to catch the FC Dallas - Colorado Rapids (er, Crapids) playoff game that night. For once, everything worked out exactly as planned, and the trees decided to help out by really showing off their fall colors too. It was a good time.
When I left Little Rock and went to meet up with Cindy and Garrett, there wasn't a cloud in the sky. But as we drove closer and closer to the river, the clouds rolled in and soon it looked dark and gloomy as if it were about to pour down rain. 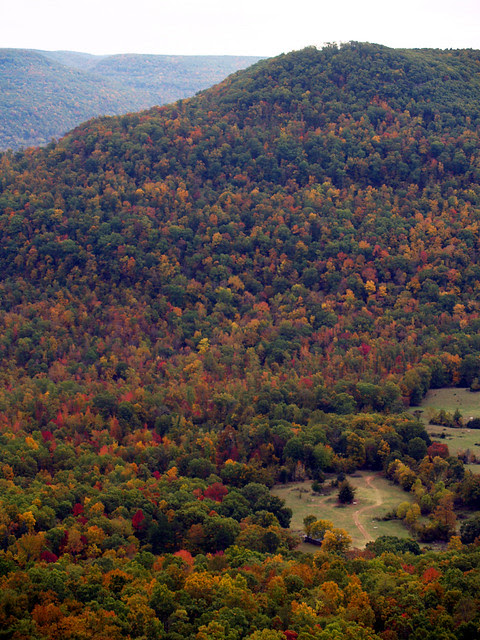 Except for a few stray drops here and there, it never really did any rain. And when we finally reached the River, the views ended up being just amazing. Here is a shot of the Buffalo River at Steel Creek: 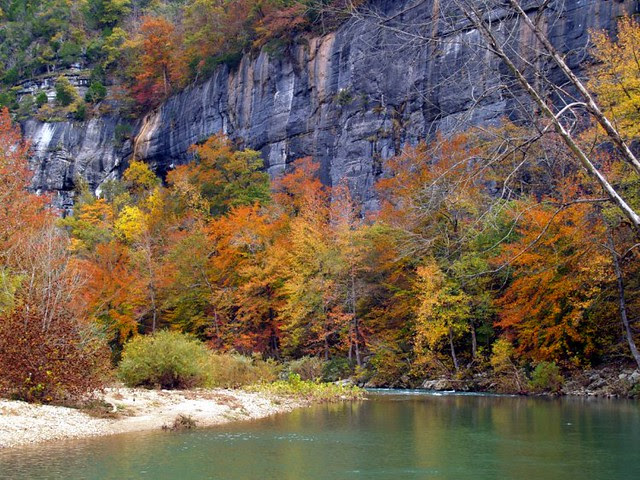 The Buffalo River is an amazing place, but one of my favorite areas along it is Steel Creek. There the bluffs are huge and it is all really easy to reach from the parking lot. This is the area where Steel Creek actually empties into the River. 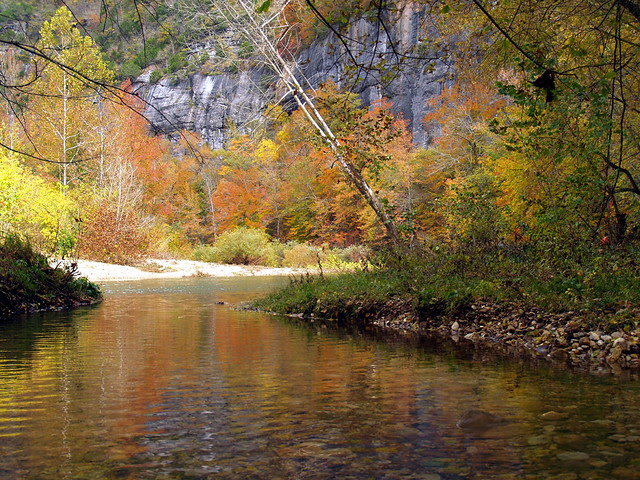 Both Steel Creek and the Buffalo River had a lot of water in it, which was a bit surprising. There were even a few people floating by on kayaks. Hopefully the didn't flip those kayaks, the water was probably really cold. 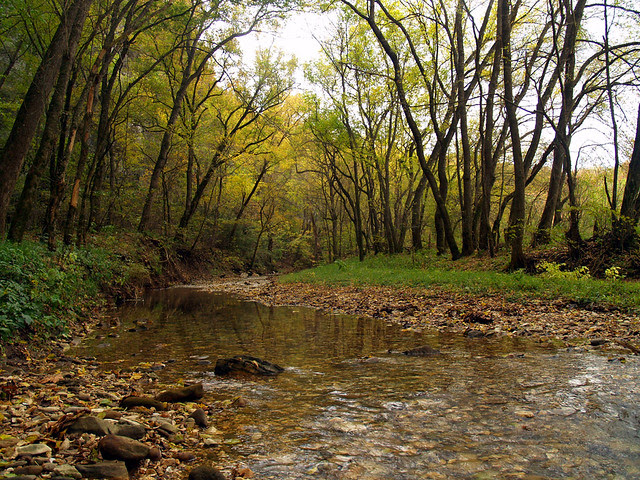 From Steel Creek we headed west to Boxley Valley, one of the other really great places along the Buffalo. To get to the Hawksbill Crag trailhead, you have to drive to the end of Boxley Valley, then take this one-lane dirt road that literally heads up the side of the mountain. The road can be a bit harrowing, especially at blind curves where you aren't quite sure if another car is barreling towards you unseen. So what should you do when traveling this road? Stop in the middle of the road to take pictures, of course! 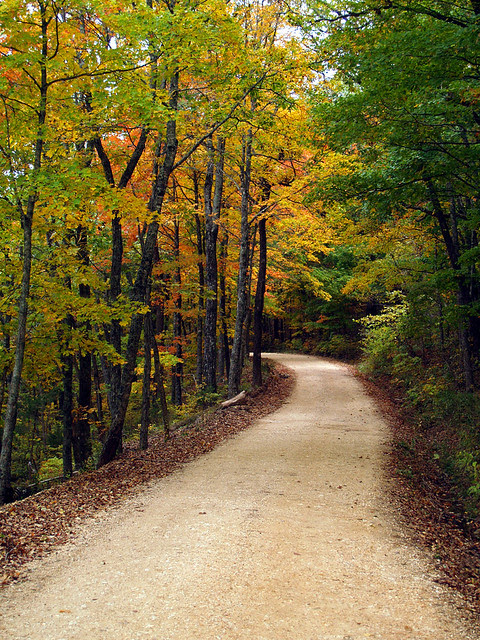 The trailhead is a long six mile drive, but it was definitely worth the drive (not to mention the 150 miles it took to get up there from Little Rock). The fall colors were really popping on Saturday... 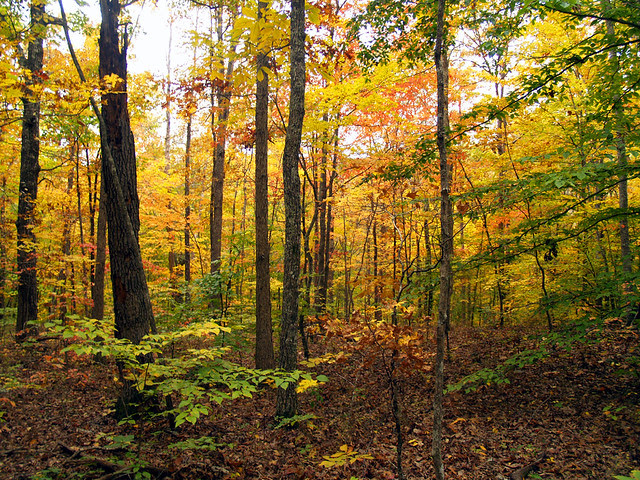 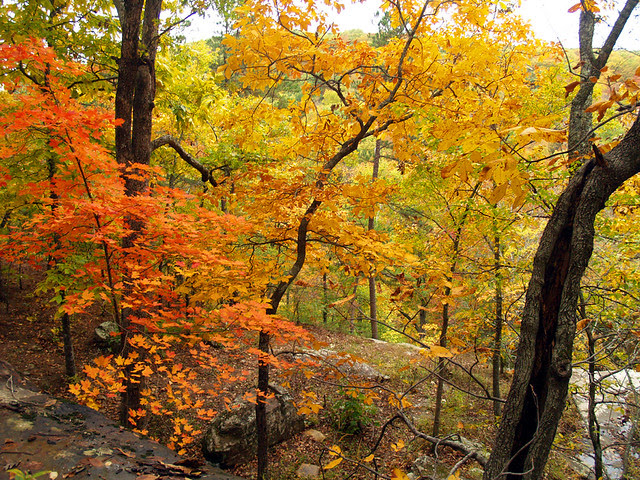 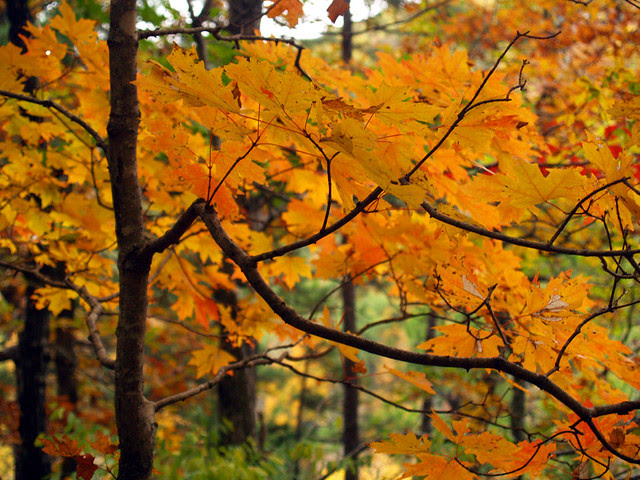 The trail is about 3 miles long total - it's about 1.5 miles to the Crag and back. The trail is fairly easy, it's mostly level except for one hill you have to climb up. But the color was outstanding there, definitely worth the exercise that hiking required. Eventually, the trail ran up to and started following a bluffline that looked out over the Whitaker Creek drainage and the Ozark National Forest. The views were quite spectacular: 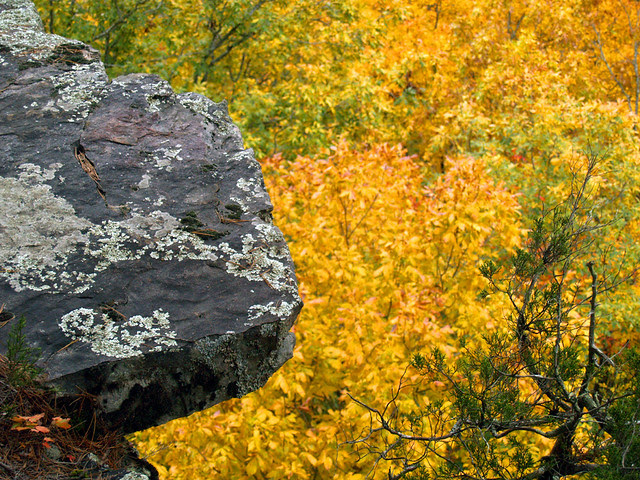 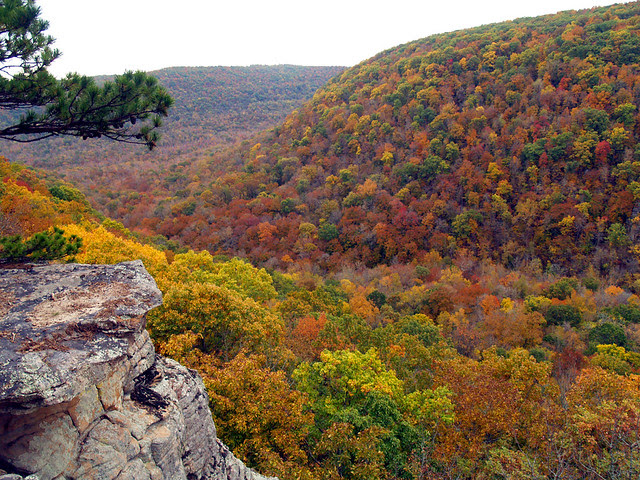 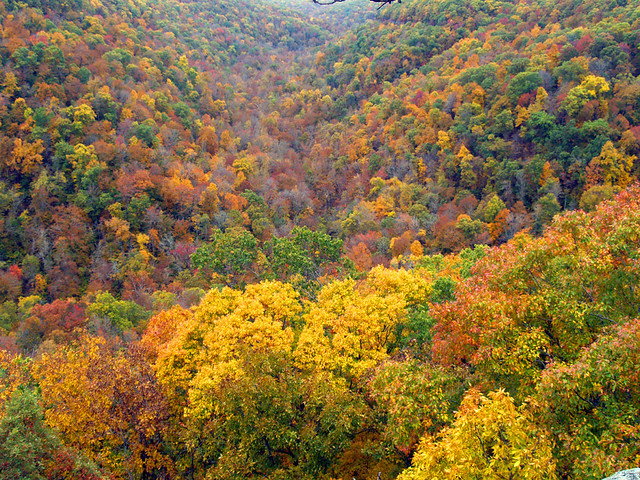 And then Hawksbill Crap itself pops into view. 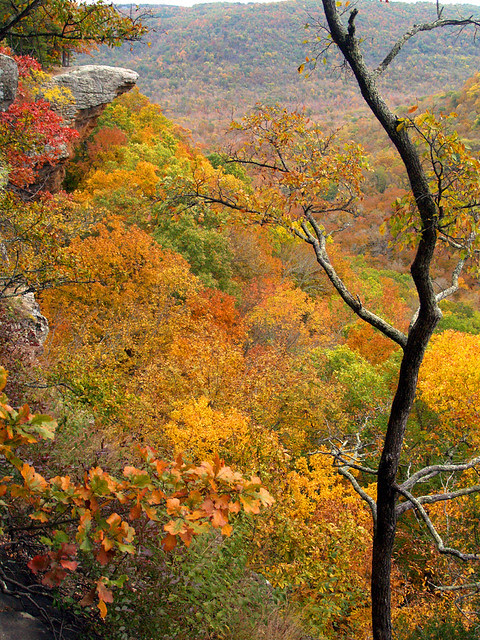 We moved closer and got to a good position to take pictures of the crag when this other group of hikers appeared and just plopped themselves down right on top of the bluff. I sat and cursed them for showing up and ruining my pictures. I want pictures of the crag, not of them sitting around. The nerve of some people. 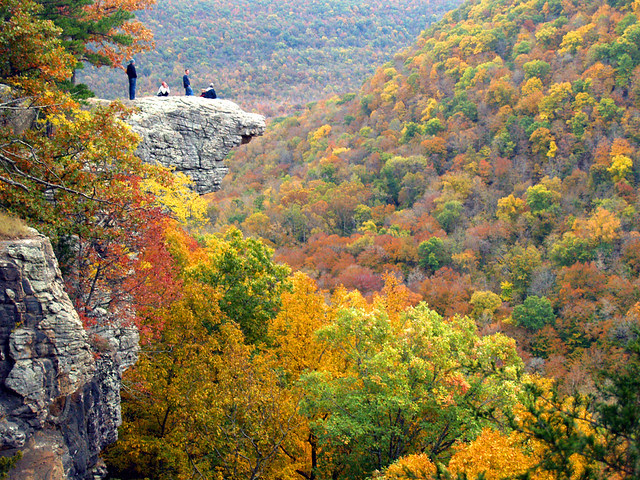 But I guess it gives you a sense of scale.

Instead of sitting around waiting for them to move - which may have been forever, they were really taking
their sweet time - we decided to move on over to the Crag too. It was easy to see why they weren't willing to leave so quickly, the views from the Crag were spectacular: 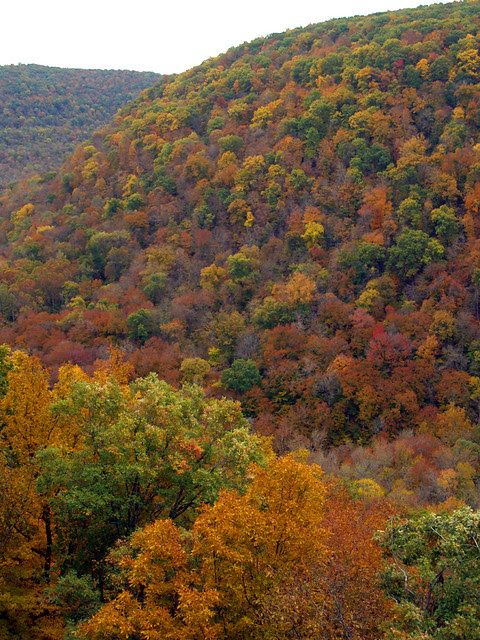 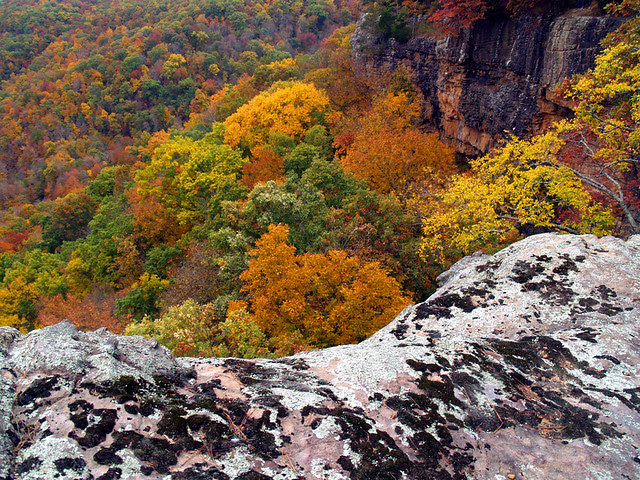 Eventually, everyone else cleared out and the Crag was empty so I rushed back over to get a shot without anyone on it. I think this is one of my favorite shots of the day here: 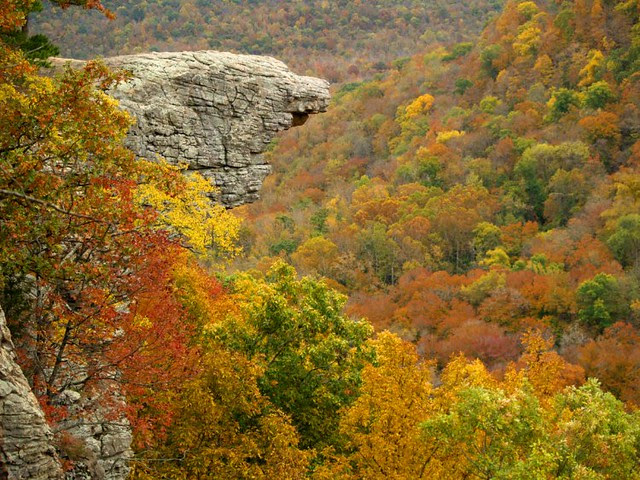 Then we worked our way back to the trailhead, looking at all the cool color that we missed hiking in. 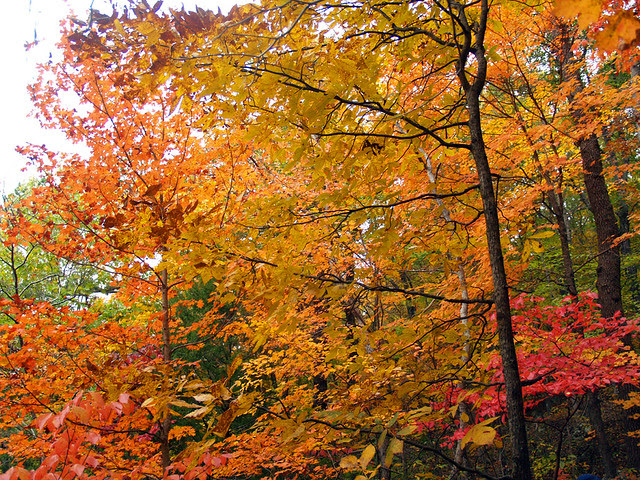 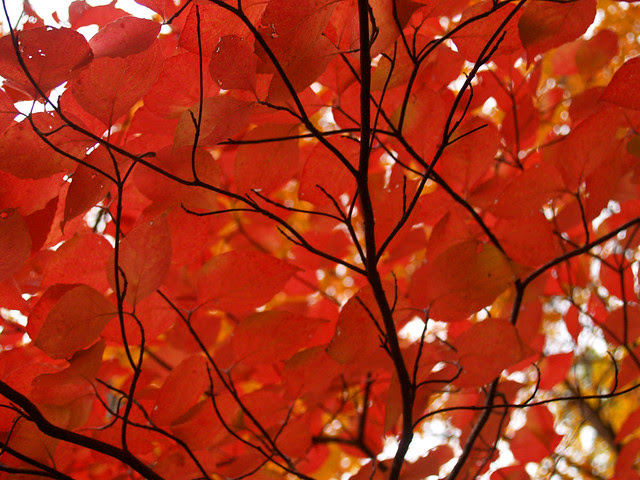 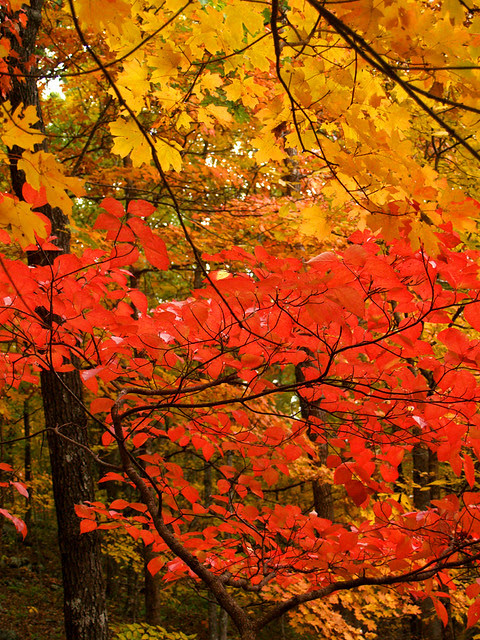 Getting back to the car it was rush down the scary one-lane dirt road into Boxley Valley to see if the elk were out. And yes! They were out. A large herd of elk were in a field, joined by dozens of cars parked crazily on the side of road. People would just stop right and rush out to join the crowd of people standing there watching the elk. I joined them, but none of the pictures really turned out. By then it had gotten too dark and my zoom lens just didn't zoom out there enough. Here is one photo that I got: 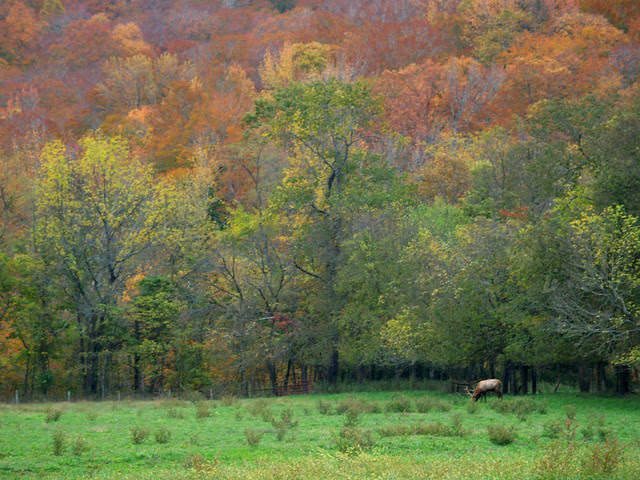 By then it was getting late and dark, so it meant it was time to head on back home. The drive from the Buffalo River back to Little Rock was a long one. I think it was about 9:30 when I got back, just in time to catch the second half of the FC Dallas game. To cap off the end of a great day, they won, 2-1. Yay!
If you made it this far, thanks for reading...I know the writing should be better or more witty, but I'm a bit rushed by trying to get this done before work. So oh well.
Posted by Cormackphotos at 6:09 PM No comments: