So it's finally Christmastime again. All the presents here have been wrapped, and too much money has been spent. After Monday, it will go back to the sad time when you have to decide when to take down the Christmas tree...sigh.

But before then, a lot of places around town have been looking really cool with Christmas lights. I've been working on a project of taking pictures of courthouses and stuff with Christmas lights on them - so that I can hope to sell them next year and make some nice spare cash. That has meant that I've been driving all over the state looking at lights for the past few weeks. Good times!

It started at the State Capitol when they turned the Christmas lights on there. I actually made it down to the little ceremony they do, which was very cheesy. Donna Tarrel (sp?) from Fox 16 was the emcee, and she was awlful. Before the lights turned on, she asked everyone in the crowd to count down from ten. She said, "Everyone, help me count down from 10!" It was funny...does she usually need help from little kids to count from ten to one? But when they turned on the lights they also set off fireworks too: 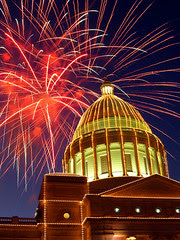 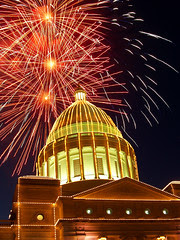 I was having tripod problems so those aren't as sharp as I'd like. Stupid tripod. But after the fireworks, we went inside the Capitol, which was decorated for the Christmas er, holiday season... 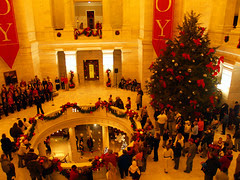 This one isn't really of Christmas lights, but I was bored. It's of the skyline from Fort Roots. It was freezing cold when I was standing out there to take this, literally. It was in the upper 20's I think. Too cold to be standing around outside taking pictures... 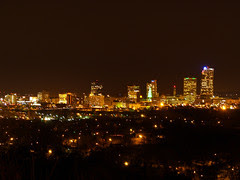 I also headed back to the Capitol to get some more shots. It was a few days later so it was luckily much warmer out... 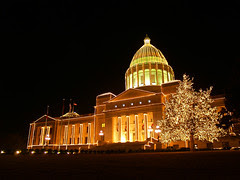 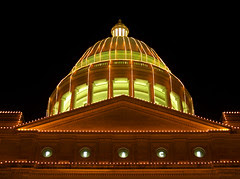 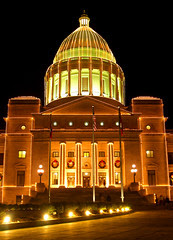 After the Capitol, I went over the Clinton Library, which had some different colored lights on it. There was actually some sort of fancy shindig going on inside the library. I assume my invitation was lost in the mail, right? 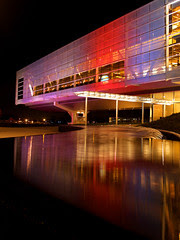 The next weekend I drove down to Benton to see the courthouse there. It had lights strung out all over the place. So there were many pictures taken... 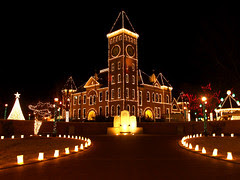 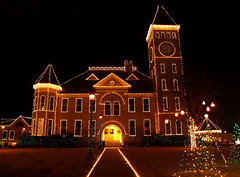 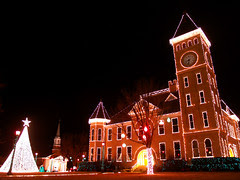 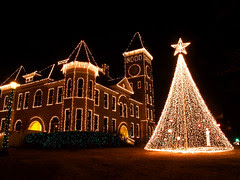 A few days after going to Benton I set out for another county courthouse - the Lonoke County Courthouse in Lonoke. So I drove all the way out there, got a bit lost, then managed to make it to their town square. It wasn't good. The courthouse had just a few strings of lights on it - actually, there are probably more Christmas lights in my apartment then at their courthouse. And at the top of the stairs to the courthouse they had set up a little nativity scene. Now, that little nativity scene was, well, tacky. If you are going to set up a nativity scene on your courthouse steps, you'd think you could buy something nicer than the plastic version from Wal-Mart. So I sadly turned around and headed back home, wasting lots of gas in the process. Thanks for nothing, Lonoke.

After that debacle, I stuck close to home for a bit. The Big Dam Bridge next to my apartment got some really fancy lights installed before Christmas. So I headed down there and got some pictures... 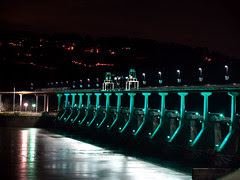 The lights are really cool - especially from the I-430 bridge. But I don't know about this blood red color, it's a bit creepy: 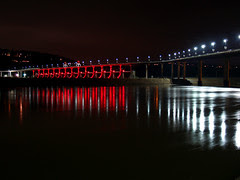 Then one weekend I made a long drive down to Hot Springs. It was really warm out there that weekend, one of those unseasonably warm days where it had gotten up into the 70's. 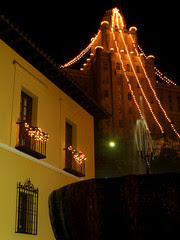 It was so warm, in fact, that they even had to shut down the outdoor ice-skating rink because it was melting. How sad: 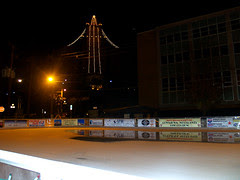 This is one of the fountains along Bathhouse Row. It was steamy, which I thought was odd since it was actually warm out. But I was trying to take a picture of the fountain with the Arlington in the background, which I would soon realize was a bad place to set up because the steam from the fountain would start blowing directly onto the camera. Doh! 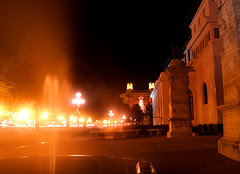 This is from the trail above the bathhouses: 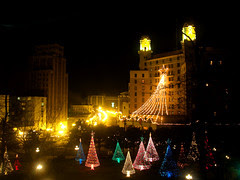 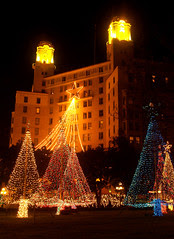 And finally, I went to the courthouse up in Searcy. That is actually a pretty long drive up there, but it was worth it. The courthouse in Searcy is great, and there was even some Christmas music playing out over the square. How festive! 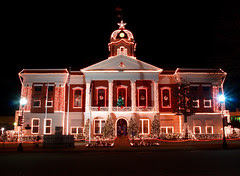 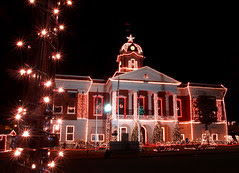 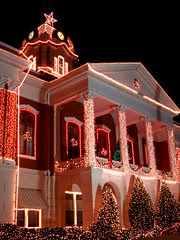 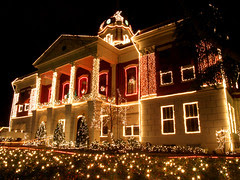 Eventhough Christmas will be gone soon, I might still try to get out and see some more courthouses (or give my car and camera a much-needed break). Oh well...

Update! Took this on the way home from Charleston tonight...it's the Logan County Courthouse in Paris, Arkansas: 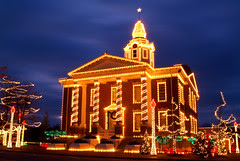 Merry Christmas to all, and to all a good night!