Up to the Buffalo River

Last week, Caroline and I decided to celebrate our fifth anniversary(!) by renting a cabin for a few days up by Jasper. It was a perfect location - quiet and peaceful, and just close enough to the Buffalo River and to the Ozark Cafe and the Low Gap Cafe. So we first drove to Searcy to deposit Jonah with family, and we headed up into the Ozarks on a bright and sunny day. We were both pleased to see that the fall colors grew more intense as we headed up higher into the mountains.

We drove up Hwy. 65, and made the short detour to Gilbert and then to the Red Bluff Overlook. The view there is incredible, showcasing a horseshoe bend along the Buffalo River. 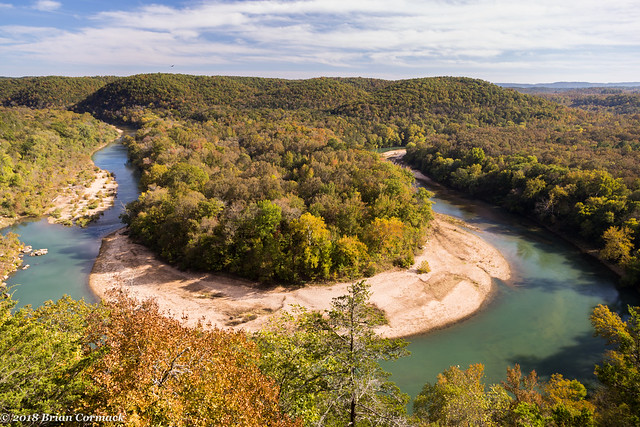 We headed over to the river at Gilbert, where the recent rains had gotten the water up high enough to float. It looked like a few people had taken advantage of the water and had recently finished a float. 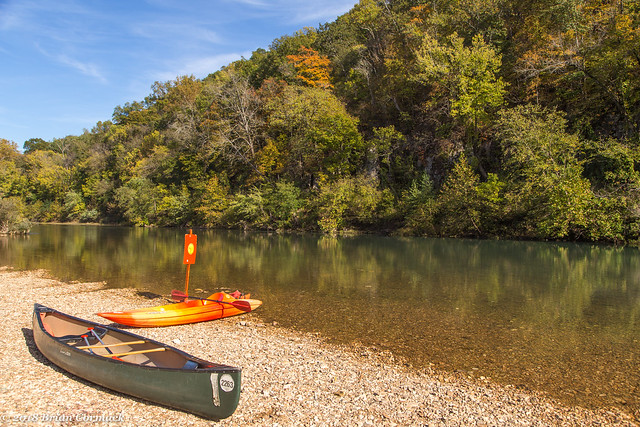 From there we headed further on, and eventually crossed the river again at Hasty. We got out and stretched our legs here, and headed down to the river. Here's a view of the fall colors, reflected in the river. 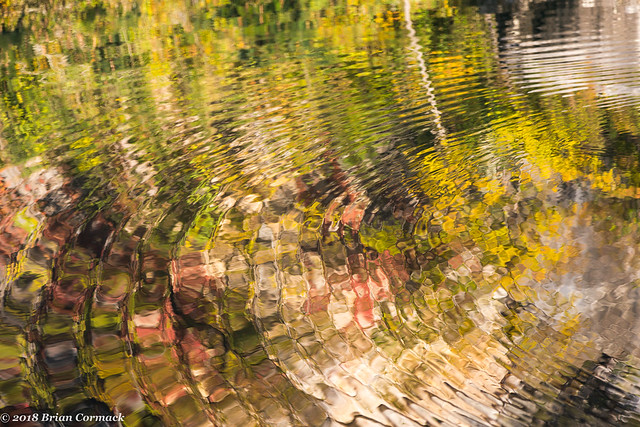 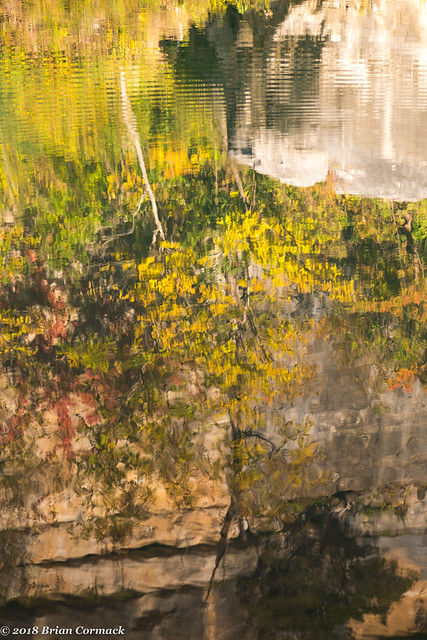 And here's a non-ripply view of the river and the fall colors, with some people walking along the river thrown in for scale. 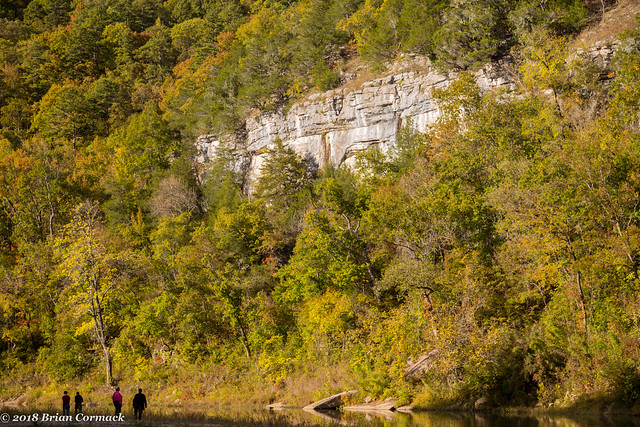 From there, we headed over and finally arrived at the cabin. The cabin sat along Hwy. 327 which heads southwest out of Jasper towards the small town of Parthenon. Of all the times I've driven around Jasper, I've never been on this road and I was surprised at how amazingly scenic it was. The road follows the Little Buffalo River, passing by farms and fields and a valley carved by the river. One definite highlight were these tall bluffs along the Little Buffalo, jutting up above a pasture. 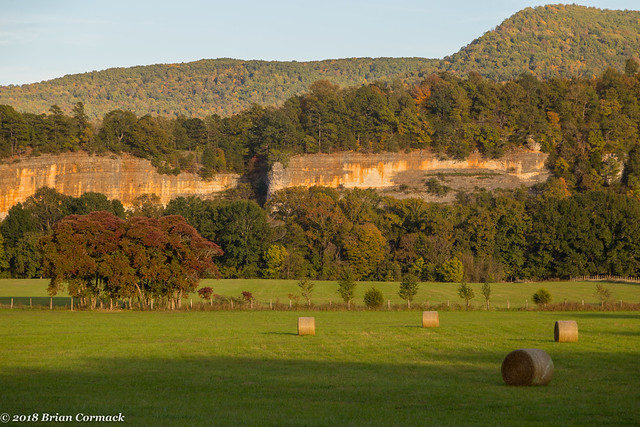 Just down the road was this view, of another pasture with a tall mountain looming over it. 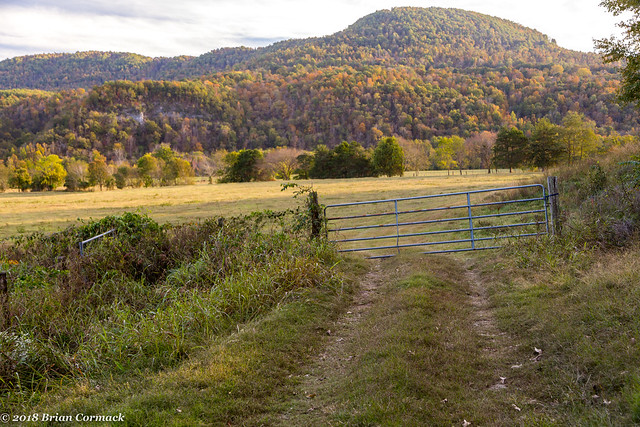 The next stop was Parthenon, a small unincorporated community. In the middle of Parthenon is the old General Store, which I assumed was abandoned but I later read that someone actually lives there (I have no idea if that's true though). 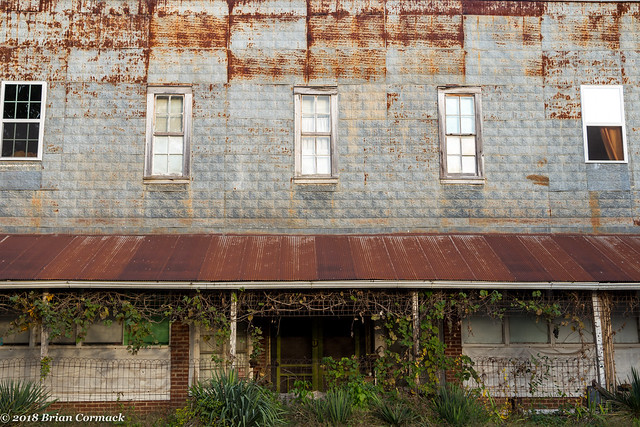 The store managed to survive an EF2 tornado that passed right through Parthenon last year. The twister destroyed the post office, which you can see the rebuilt one in the background of this picture. 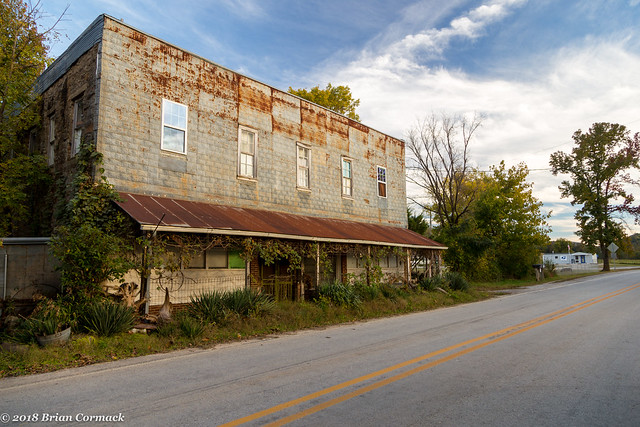 After this we headed into Jasper for dinner at the Ozark Cafe, and then I'd wake up the next morning and head out to a foggy Buffalo River for a few pictures. More on that soon....
Posted by Cormackphotos at 10:55 PM No comments:

There are six bridges crossing the Arkansas River between the downtowns of Little Rock and North Little Rock, and the first one to be built was the Baring Cross Bridge in 1873. That bridge stood until 1927, when most of the bridge was washed away by a massive flood. Just two years later, a new Baring Cross Bridge was built. That bridge is still in use today by the railroad, the only old bridge in Little Rock that is still used for trains (the other two are now pedestrian bridges).

This is a view of the bridge from last week, showing a streak of light from a train slowly making its way across the bridge. From here the trains pass under Cantrell Road and then rumble on towards Union Station. 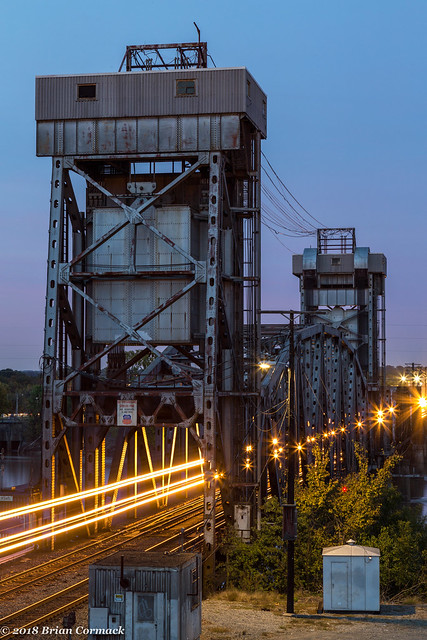 Posted by Cormackphotos at 11:10 PM No comments:

I was recently given permission and the opportunity to take a few pictures from a few spots in downtown Little Rock, both of which just happened to provide views overlooking Capitol Avenue. One of the buildings is perched right on the corner of Main and Capitol, providing this view looking off towards the west. In the distance is the Simmons Tower and the Arkansas State Capitol. 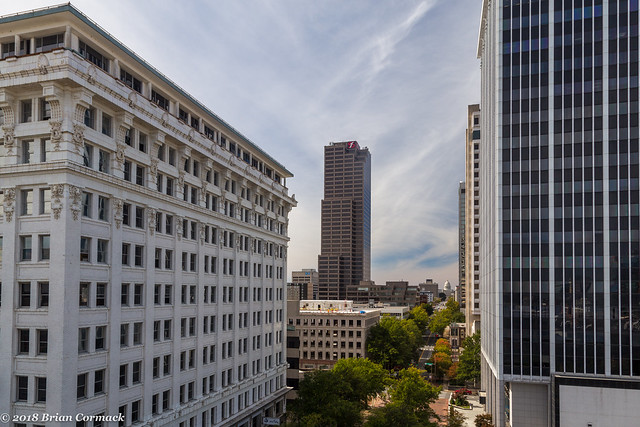 At the opposite corner of the intersection is the Boyle Building, which was built in 1909. At eleven stories (a twelfth floor was added in the 1940s) it was the tallest building in the state. It held that distinction until the nearby Donaghey Building was built in 1926. The building is currently empty, although there are plans to convert it into apartments or a hotel. 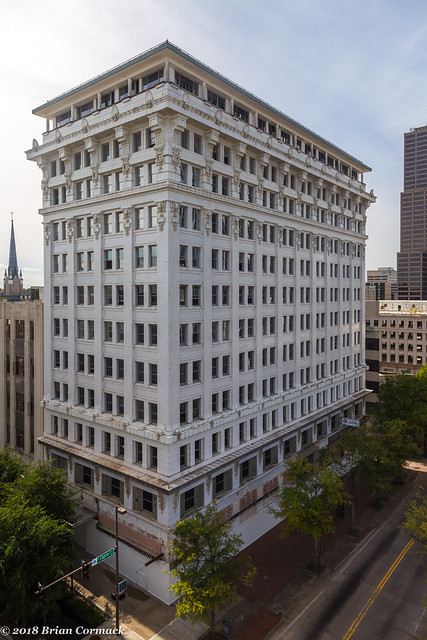 A few blocks away is the Simmons Tower, which is currently the tallest building in Arkansas at 40 stories. This is the view from the 15th floor of the building looking east towards Capitol Avenue. 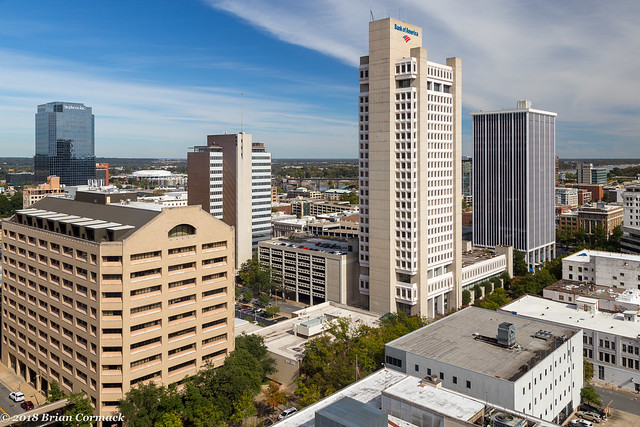 This has been an unusually rainy year. In fact it has rained so much lately that waterfalls are actually running, which is such a rare treat. It seems like the last few years we have been suffering under droughts, which dried up all the rivers and creeks and turned the trees brown. So after it rained all day on Saturday, I headed out to Petit Jean Mountain to take advantage of the flowing waterfalls on Sunday afternoon. 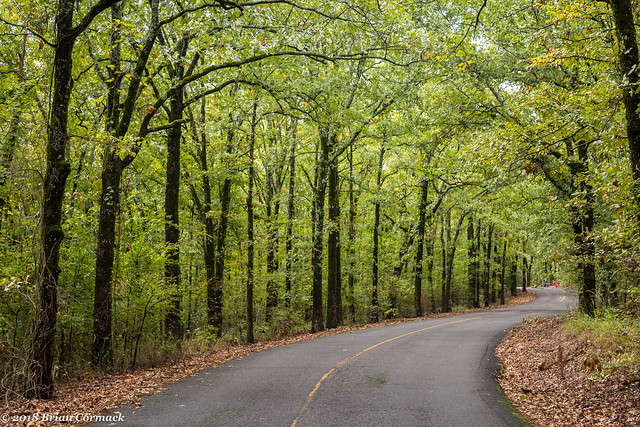 My first stop on the mountain was Stout's Point, and after I few minutes I got in the car to head toward the park. Just as I was about to turn onto the main road, I heard a distant siren. Soon enough, a big pickup truck came flying up the road with a blaring siren. But it wasn't with the police, the truck had a large American flag flying from the back (along with a red and black flag I didn't recognize) and had a large TRUMP sticker. The truck roared past, and I turned onto the road and followed it. Shortly after, I heard another siren and pulled over as a police SUV zoomed past, hurrying towards the truck. By the time I got to the entrance to the park, the truck had been pulled over. There were park rangers directing traffic past the scene, which involved the driver of the truck laying on the ground while the police gave him CPR. I didn't slow down much to gawk, so I have no clue what that was about. I never heard anything about there being a chase or anything that exciting on the news that day. I continued on towards the lodge, where things were much calmer and normal.

From the lodge I headed down the trail to Cedar Falls, which was fairly busy with people enjoying the nice weather. I wasn't sure how much water there would actually be in Cedar Creek, so I was pleasantly surprised to see that it was flowing nicely. 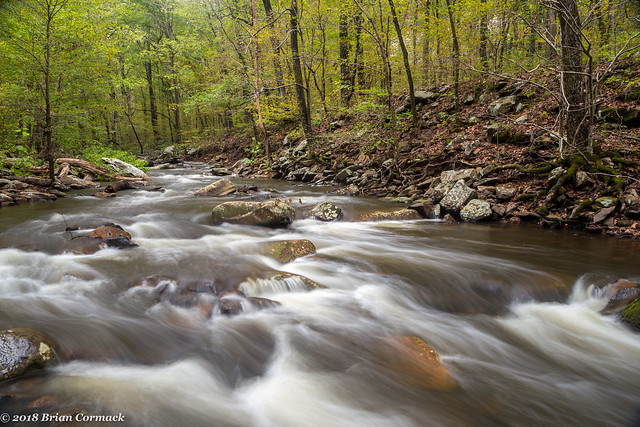 And a bit further up the creek. This was actually taken while standing on one of the boulders that lines the creek. 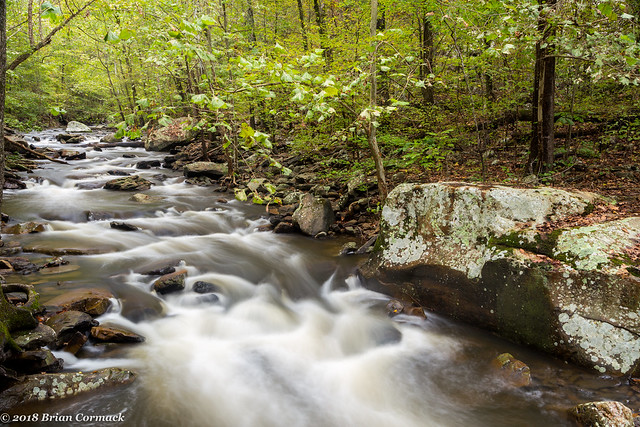 It was still a bit early for fall color, but the trees are just starting to change some. 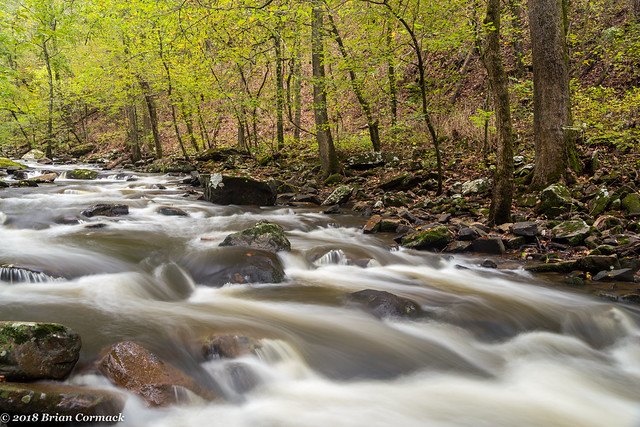 I finally made it to Cedar Falls, which is one of the most scenic waterfalls in Arkansas. The falls are 95 feet tall, and they plunge into a deep pool that is surrounded by a tall canyon. 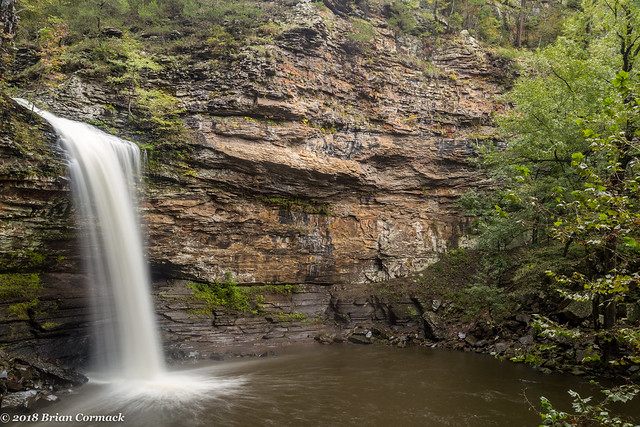 There was a lot of water going over the falls, but it's not the most I've ever seen there. In 2015 I hiked in when the creek was flooded in order to get this shot: 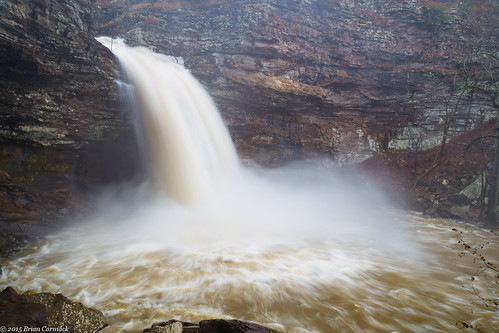 And a panoramic shot showing the falls and the pool, with a few other hikers sneaking into the frame.

I headed to a spot downstream of the falls, and waited for people to clear out in order to get this shot of the falls and the creek crashing amongst the boulders and rocks. 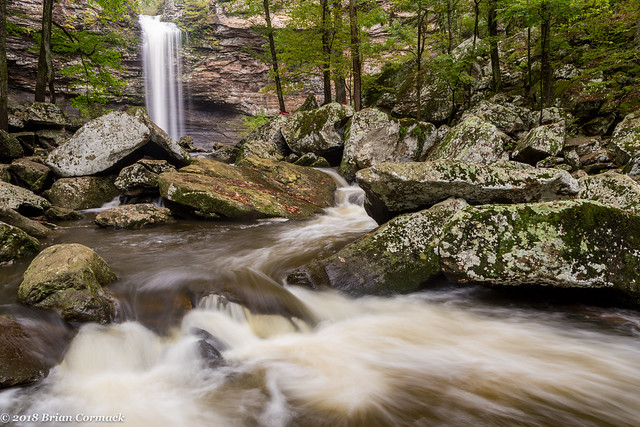 And the view from a wee bit further downstream: 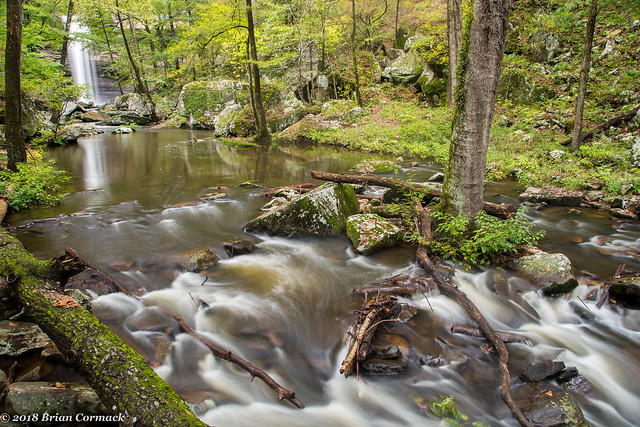 And one last shot of Cedar Creek. I tried to stop as much as possible to delay the inevitable hike up the trail, which ends with a steep ascent up the canyon back to the lodge (which is a perfect way to remind yourself how out of shape you've become). 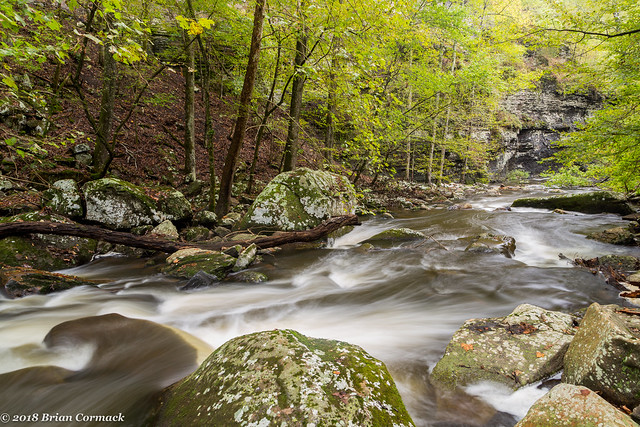 I was in downtown Little Rock and managed to get a few pictures around the old Robinson Center Music Hall. The auditorium first opened in 1939, and underwent a massive renovation in 2016 that completely updated the interior and added a ballroom and terrace on the back of the building, overlooking the Arkansas River. This is the view of the new addition, which was reflecting the light from the sunset. 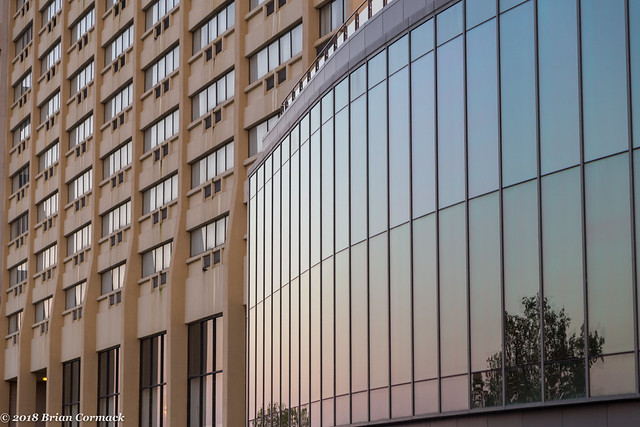 Next to it is the Doubletree Hotel, though I still want to call it the Camelot even if it hasn't been called that in years.

And finally here's a shot of the front of the building, showing off the massive facade. The columns were built in a Greek Revival style, meant to echo the Old State House. 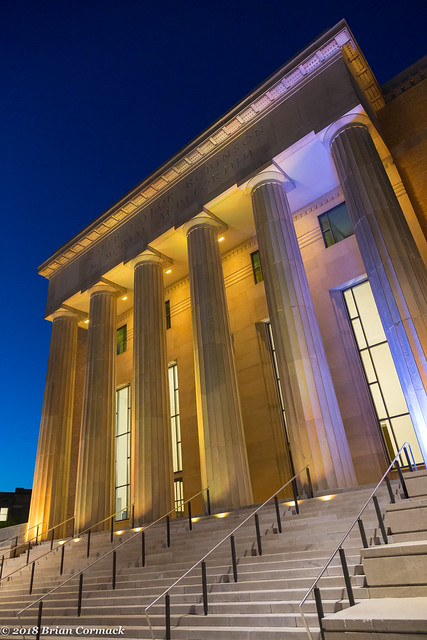 Posted by Cormackphotos at 11:30 PM No comments:

There are lots of old buildings in downtown Pine Bluff, and tucked away in an alley between two of those old buildings is an old Coca Cola ghost sign. The sign probably dates back to the early 1900s, and proudly boasts that Coke will "Relieve Fatigue." 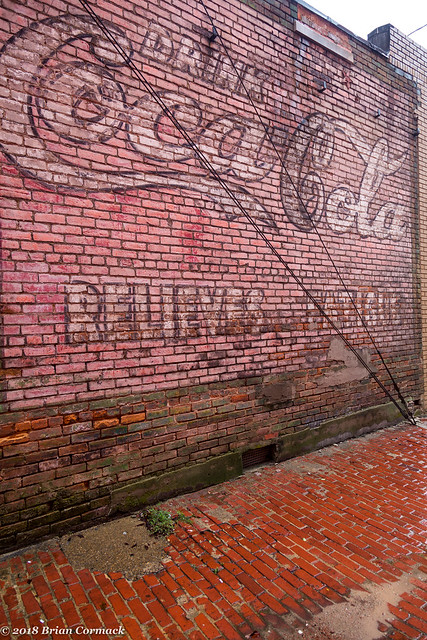 Seeing the Coke ad reminded me of a picture I took many years ago (or well 2009 to be exact), in Ozark, Arkansas. There was a Coke ad in that picture too, which was some great product placement. 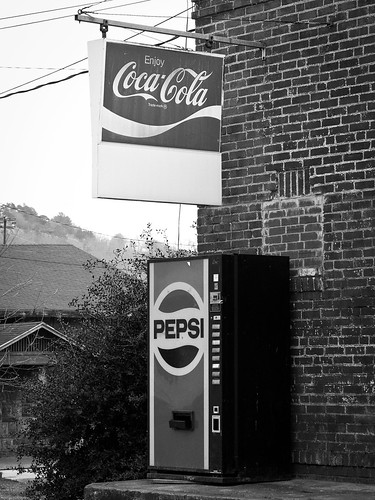