I was in Fayetteville over the weekend, and decided to swing by the University of Arkansas campus before heading towards home. I went by Old Main, the building that is the landmark of the U of A campus. It has some Christmas lights on it, and the plan was to get a few pictures of Old Main with the lights aglow.

So before dusk I staked out what I thought might be a good spot, and then waited for it to get dark. It was a bit chilly outside, so I waited in the cold for the lights to turn on. But after waiting for over an hour, they never did flicker on. So I left without any pictures of the Christmas lights. But did get this shot of Old Main (built in 1876), at dusk. 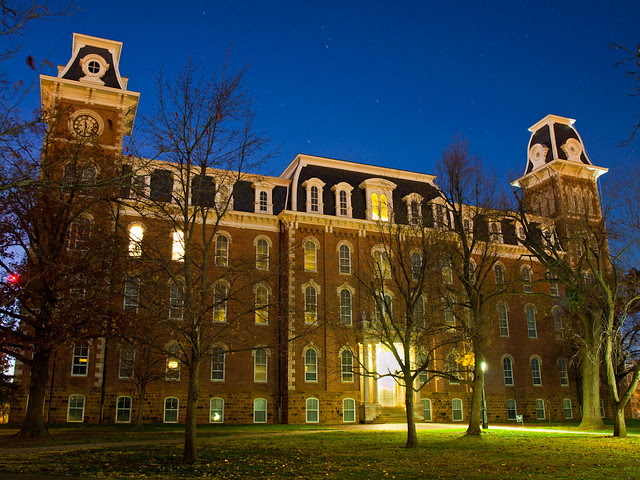 I got back to the car and cranked up the heater, and went to get some gas before the long three hour drive home. After gassing up the car, I looked back towards the campus and saw the Christmas lights on Old Main all glowing in the night. Of course, but I headed on home anyways. I'll get that shot next time around....
Posted by Cormackphotos at 9:05 PM No comments:

Since I was driving through North Little Rock on Sunday, I decided to swing by The Old Mill to see what the fall colors were like there.  The Old Mill is probably the most popular spot in NLR, and is usually crawling with people like ants at a picnic.  It was cloudy and rainy on Sunday, which I hoped would cut down on the crowds some.

I pulled up to the park and there were a line of cars there. There had just been a wedding at the Mill, but it was over and the crowd was leaving. I was surprised to see just a few people left at the Mill. 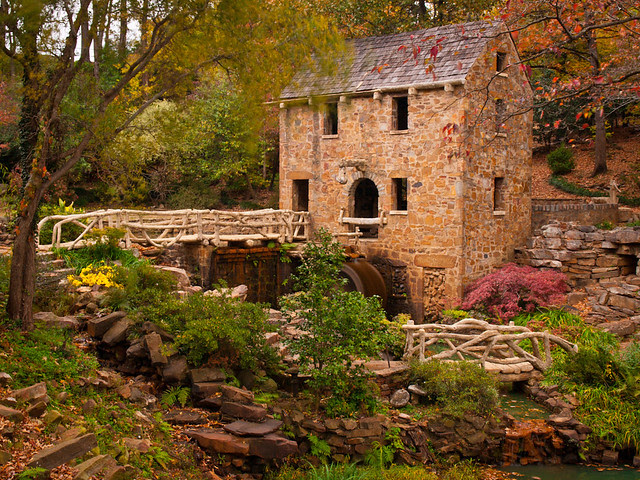 The fall colors were great, although the wind was steadily knocking the leaves off the trees. 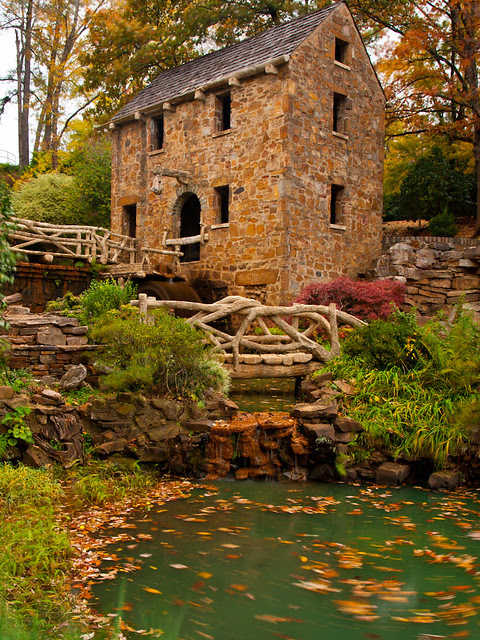 I tried to get a better swirl with the leaves in the pool, which would have meant a longer exposure. But it was starting to pour down rain, and I had conveniently left my umbrella in the car. Since I was getting soaked, and there was some lightning nearby, I decided to head back to the dry car instead...
Posted by Cormackphotos at 9:22 PM No comments:

The fall colors this year have been spectacular, which is amazing since we had such a dry and hot summer. The colors are at peak in central Arkansas, so I headed out to try to get a few pictures before they all fall of the trees.

I met up with Zack and John, and we drove out towards the Delta. The first stop was the small town of Scott, which sits about 30 miles east of Little Rock. Scott is a huge contrast to the city; the small town is surrounded by farms and fields, and a few old plantation homes nearby. One of the most popular areas around Scott is Pecan Alley, where old pecan trees line the sides of the road. 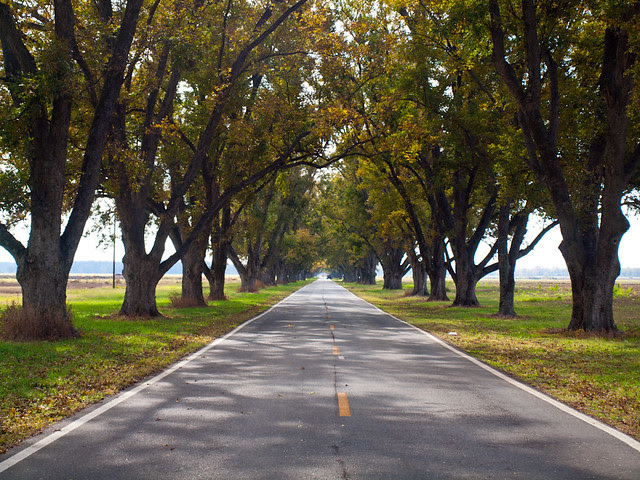 It's a really neat spot, but I think I spent more time eating pecans than taking pictures. I'm not really a big pecan fan, but the ones there were delicious.

We drove along the road, passing by this abandoned old church. 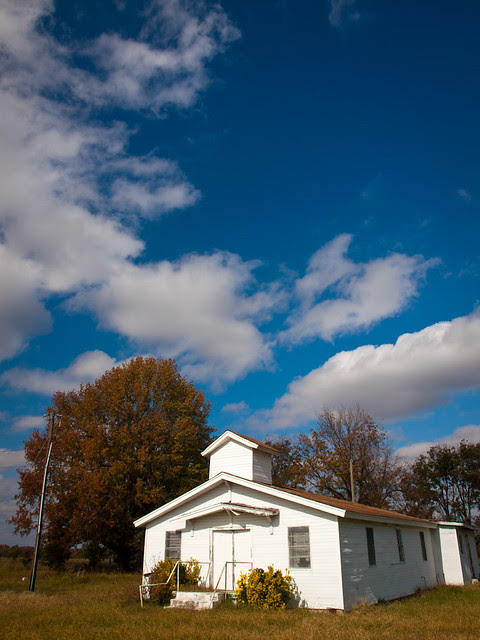 From there we headed back to Scott and got lunch at Cotham's, the local burger place that was shown on "Man vs. Food" a few years back. The burger was just as good as the atmosphere there, although I wasn't brave enough to order the hubcap burger.

After lunch, it was back into the car. We drove further east, deeper into the Delta. It is amazing how much the landscape changes after driving just a little bit. Little Rock sits in the rolling foothills of the Ouachita Mountains, but just heading about 50 miles puts you in the flat expanse of the Delta.

The last stop that day was the Dagmar Wildlife Management Area, near Brinkley. The WMA preserves nearly 8,000 acres of bottomland hardwood forests, streams, ponds, lakes and bayous. The real highlight of the WMA is Hickson Lake, which can be easily reached by the dirt road that runs through the WMA. The road is in pretty good shape, although it did kick up some rocks that made ominous noises as they bounced around my car's undercarriage.

The shores of Hickson Lake is lined with thousands of cypress and tupelo trees. Some of the trees are massive, in fact there are trees in the area that are thought to be over 1,200 years old. 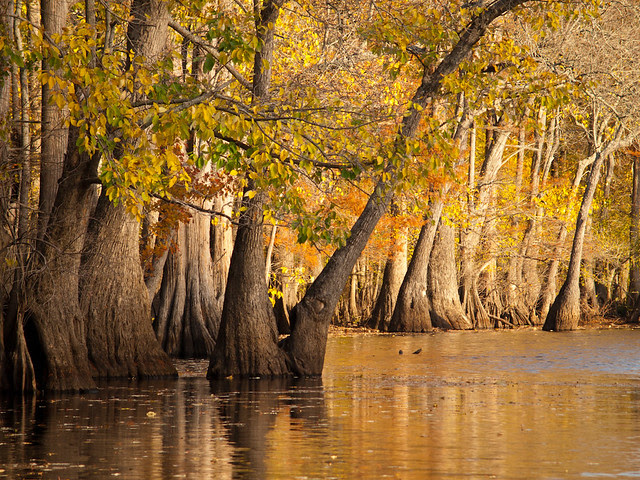 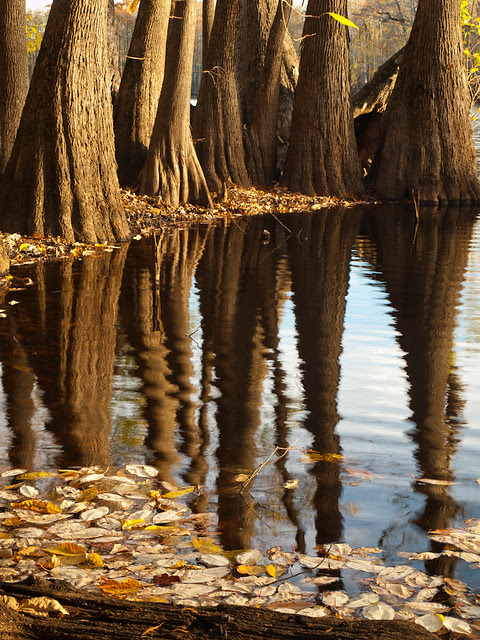 The sun began to set, and the light began to slice through the trees along the opposite shore of the lake. 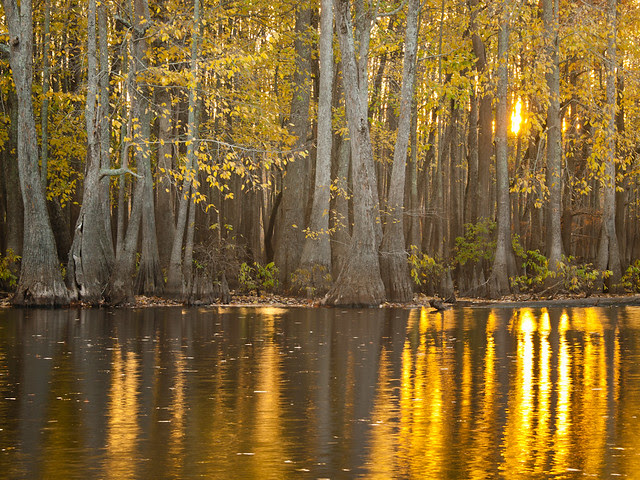 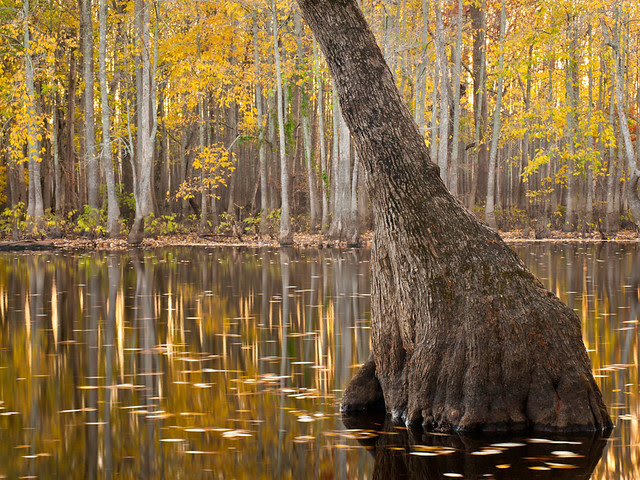 And one last shot, taken around sunset. The streaks in the water are leaves getting pushed around by the wind. 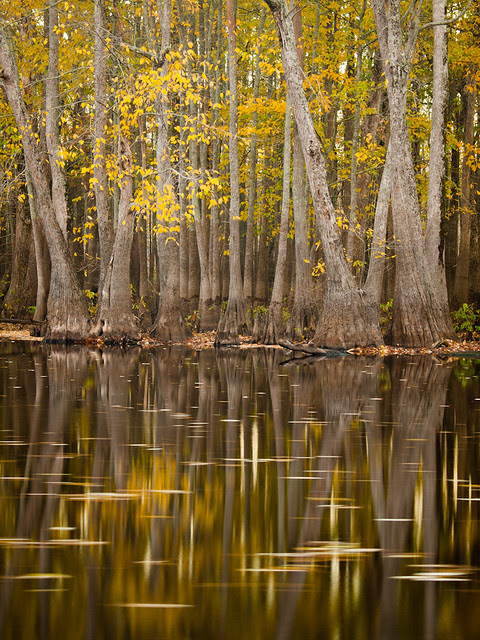 The Wildlife Management Area is run by the Game and Fish Commission. It's a popular spot to hunt, which meant there were a lot more hunters out there than photographers. We began to hear more and more gunshots in the woods around us, but luckily (or hopefully) they were aiming at something else besides three people with cameras. We left as it got dark, and got some good BBQ from a place in De Vall's Bluff, and then made our way on back towards Little Rock.
Posted by Cormackphotos at 8:38 PM No comments:

So tomorrow is Election Day, and here is my obligatory post about it (in case you haven't heard enough already about the election).  I went and early voted last Thursday, and it only took an hour and ten minutes!  But I did my civic duty, even if the guy I voted for doesn't have a chance of winning the electoral votes of my state.  But while looking at all the names on the ballot, I was disapointed that none of them were as awesome as the name I saw on a yard sign a few weeks back in Missouri: 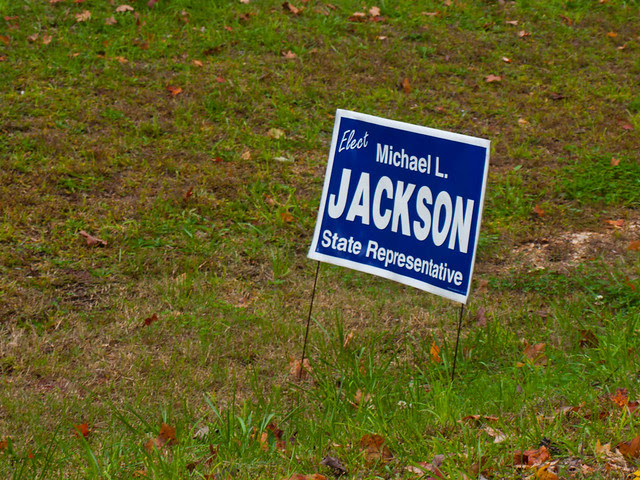 This reminded me of a sign I saw in 2008, up in northern Arkansas. I definitely wouldn't vote for him, since he turned into Lord Voldermort. 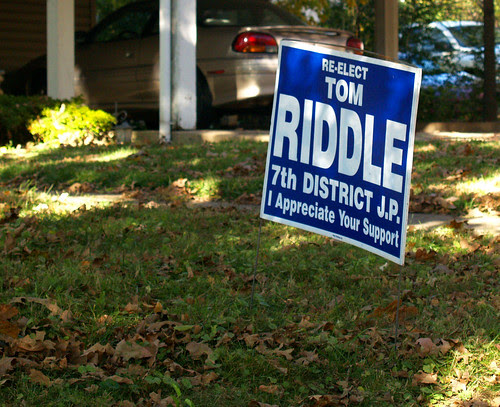 But speaking of Presidents, I'm going to post one more photo. This is an oldie, taken way back in the 1980's. When I was in the 3rd grade, one of our class projects was to do a report on a president. I ended up doing a report on Abraham Lincoln (my research did not cover the fact that he was a vampire hunter). But the twist on the assignment was that on the day that the report was due, we would each dress up as the president we studied. I lucked out on this, since a Lincoln costume would be much easier than say, Franklin Pierce or Herbert Hoover.

All of the 3rd graders then took a field trip to the State Capitol, where we toured the building and got to meet the governor. And since this was Arkansas in the 1980s, the governor was a politician that you might have heard of - Bill Clinton. So this is me, dressed as a tiny Abraham Lincoln, shaking hands with a future President. As you can tell, my outfit was very historically accurate (Lincoln wore white tennis shoes, right?). 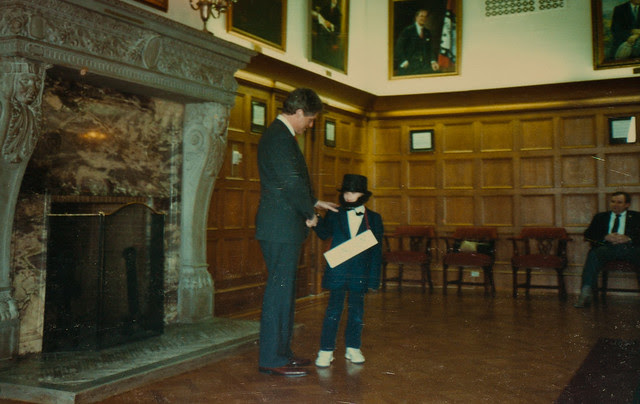 Posted by Cormackphotos at 8:59 PM No comments: