Last Saturday was a cold and rainy winter day, which sometimes can make for some interesting pictures. So I headed west towards the Ouachita National Forest, which is just a relatively short drive from Little Rock. Along the way I passed by this old store, abandoned and empty. I'm assuming that Game Room probably used to host some rad Pac-Man games back in the day. 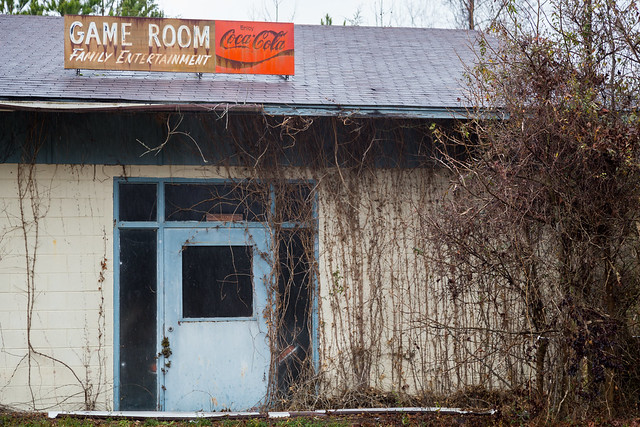 I ended up driving the bumpy dirt road that leads to Flatside Pinnacle, which was transformed into miles of slick mud by all the heavy rains that day. The car slid in a few spots, but managed to get by ok (other than getting completely covered in mud). There were also many stretches where the road disappeared in the thick fog. 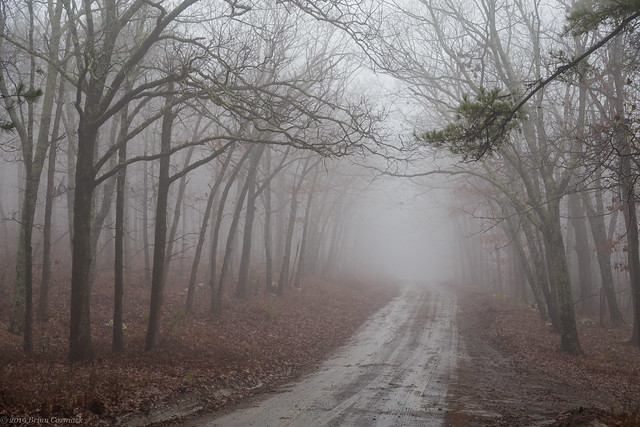 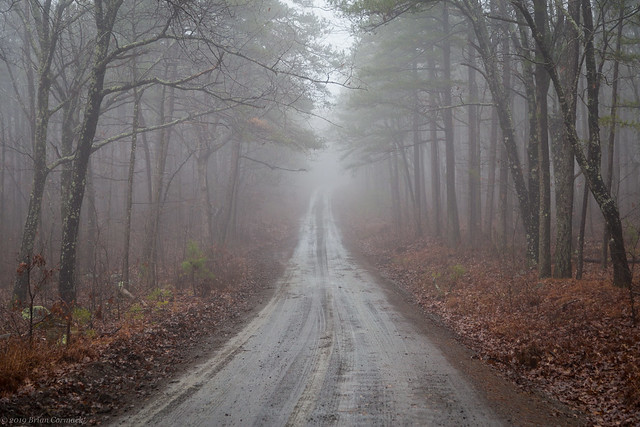 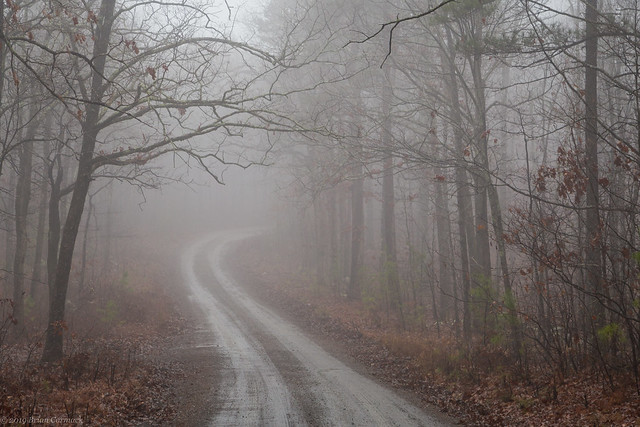 Unsurprisingly, there weren't a lot of other people out driving there that day, for some reason. 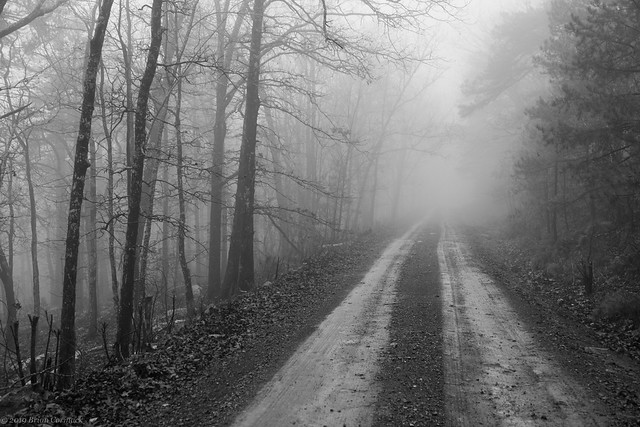 I made the short hike up to the top of Flatside Pinnacle, which sits at an elevation of about 1,500 feet and was completely blanketed by fog. 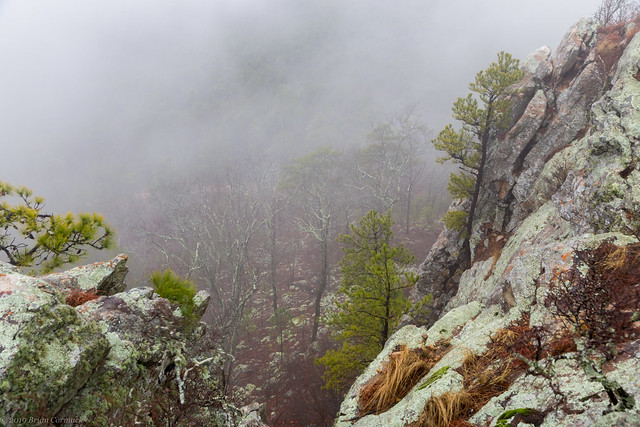 Usually this is one of the best views in the state - where you can see miles and miles of wooded hills stretching off into the distance. This was the view the last time I was here: 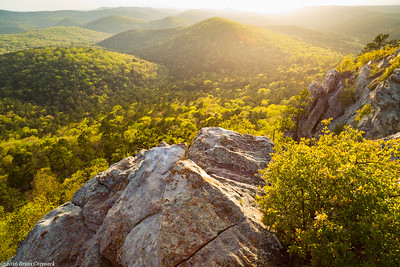 The rocks along the top of the mountain were covered with a wide variety of mosses and lichen, which glowed a vibrant green against the dull browns of the foggy winter woods. 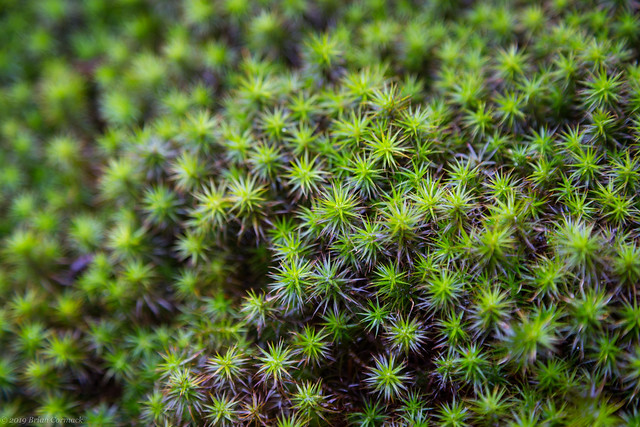 I started to head home since it was starting to get darker and foggier, but did try to get one last shot along the way (and somehow didn't manage to get stuck in the mud). 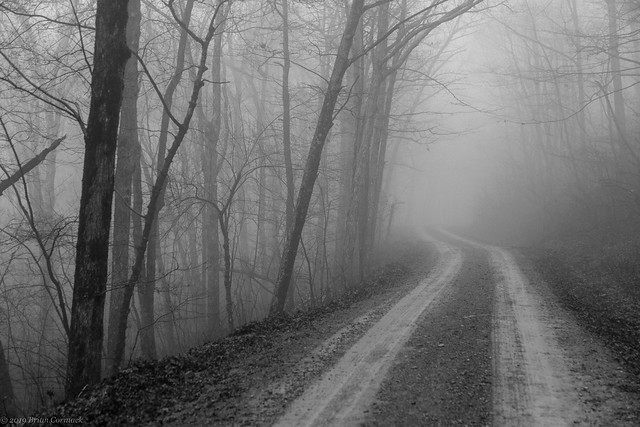 Posted by Cormackphotos at 10:58 PM No comments: 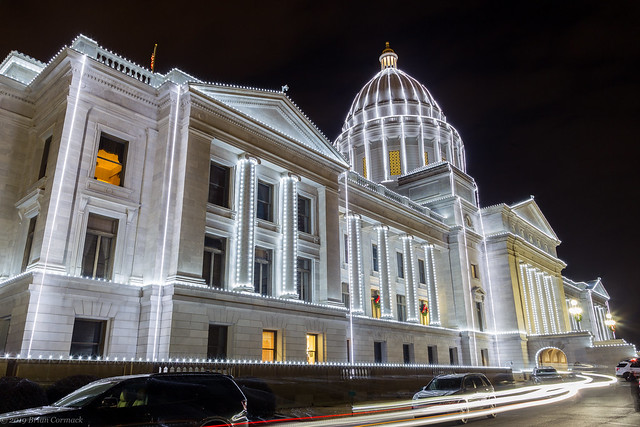 Streaks of light from cars passing beneath the Arkansas State Capitol, which was decked out in thousands of lights for the holiday season.
Posted by Cormackphotos at 10:38 PM No comments: 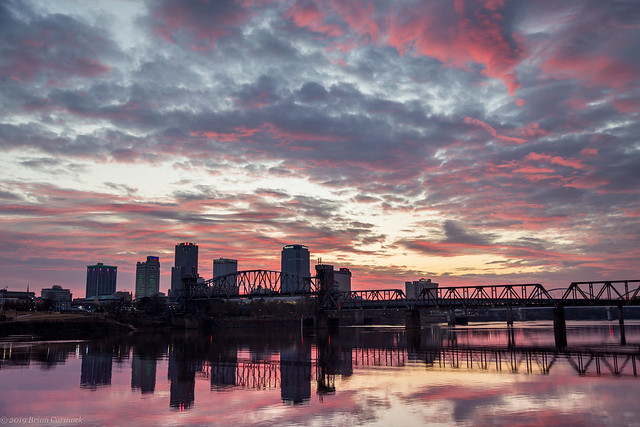 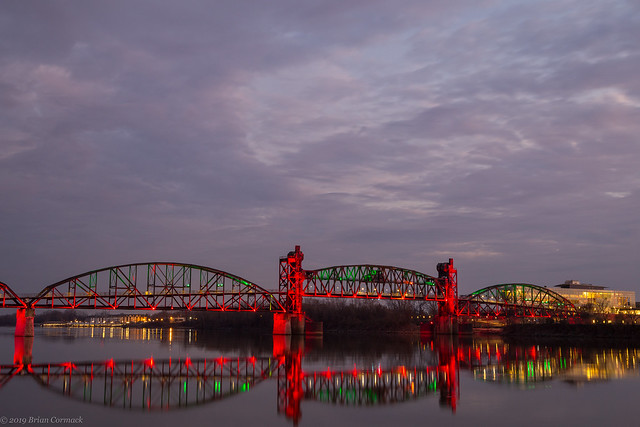 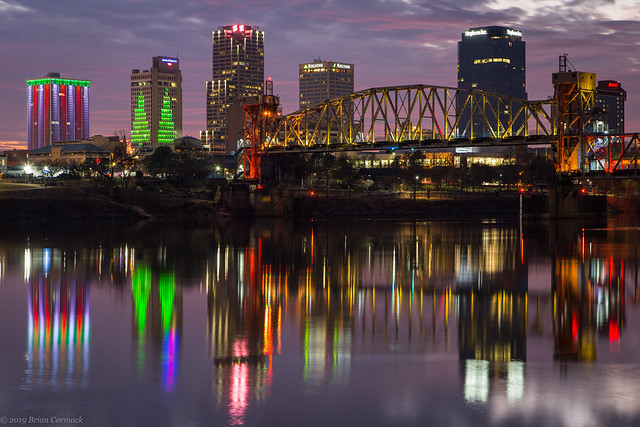 The path that the trolley that runs throughout downtown Little Rock and North Little Rock follows isn't all that long, but it does manage to hit some notable locations. It runs by the River Market, the Clinton Presidential Library, Main Street Argenta, the Old State House, the Historic Arkansas Museum, King Friday's Castle, the Great Oak Tree and even the home of Grandpere Tiger (I may be getting these mixed up with some locations that the trolley from Mr. Rogers visits in the Neighborhood of Make-Believe). But every winter, the trollies are decked out with some Christmas lights and decorations, which do a good job brightening up the streets at night. So I made an attempt at getting a a few shots of some of the trollies as they slowly made their way through downtown Little Rock. This was taken while looking down President Clinton Avenue by the River Market. 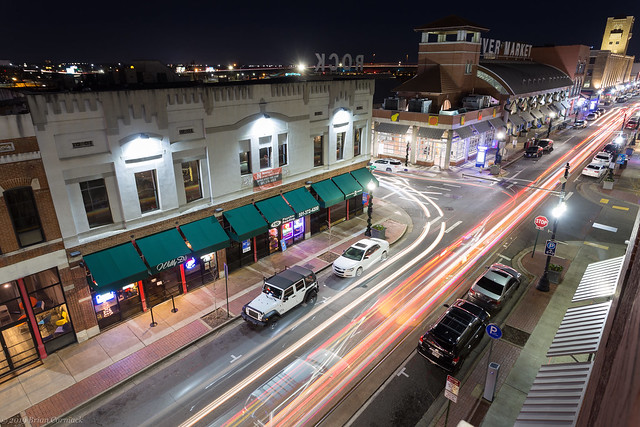 A few blocks away, the lights of the trolley were reflected in some buildings along Markham Street near the Old State House. 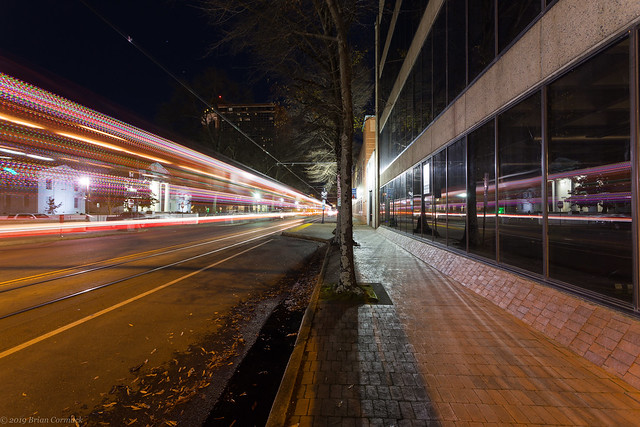 And then one last shot, with a blur of lights from the streetcar passing by the brightly-lit Old State House. 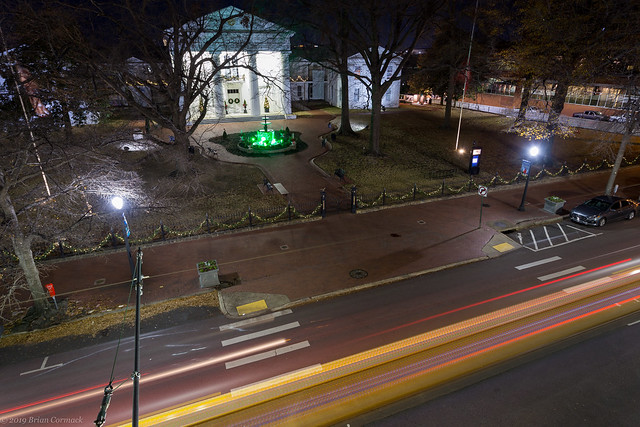 Posted by Cormackphotos at 10:55 PM No comments:

We headed out last weekend to see the fireworks show at the State Capitol, which happens right when about 100,000 holiday lights are switched on for the season. This year, the state changed things up and placed fireworks all along the roof of the building and the dome (which burned red and eerily looked like the dome was on fire at times). But we had set up on a hill behind the capitol which usually provides a good view, but this year most of the fireworks seemed to be aimed towards the front. It was still a good little show. Jonah watched and asked to see it again as soon as it ended. 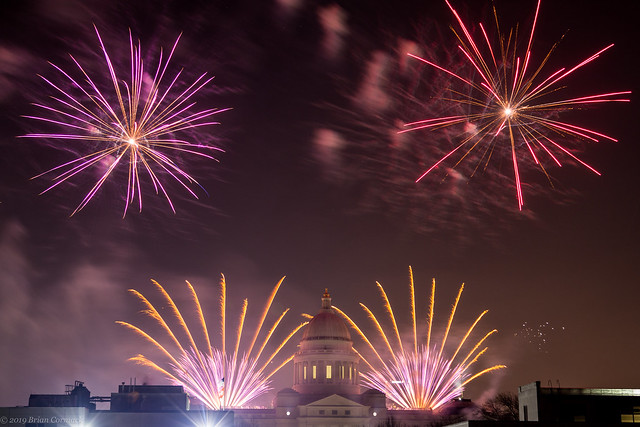 Posted by Cormackphotos at 10:56 PM No comments:

There is a billboard company here that likes to advertise itself by saying something like billboards are the public's art gallery, which always seems extremely silly. But I did find one time where it was actually true. Located along a busy road near downtown Little Rock is this old billboard, which has faded and rusted over the years into a work of art. It's now a ghost sign, advertising businesses that probably no longer exist and products that are definitely no longer available to purchase for Christmas presents. It's hard to make out what all the sign says, though it looks like it last promoted a place called Yanks that had delicious food. 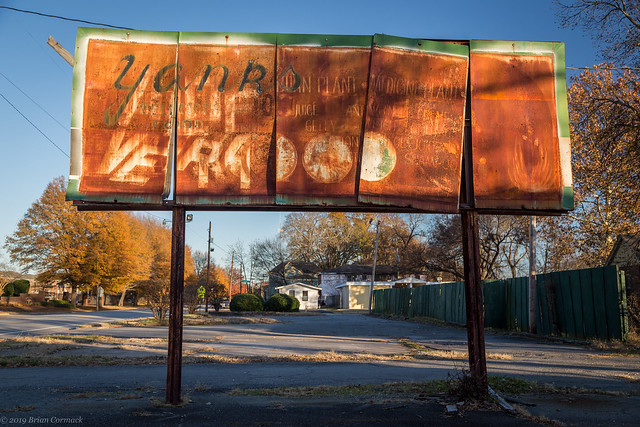 Some strong winds have recently knocked just about all the leaves off the trees, so I guess the Fall Color season is now officially over. But I did recently try to make one last attempt at autumn pictures, ending up at Mount Holly Cemetery in downtown Little Rock. There were a few trees still stubbornly holding onto their leaves, sitting amidst the solemn rows of graves. 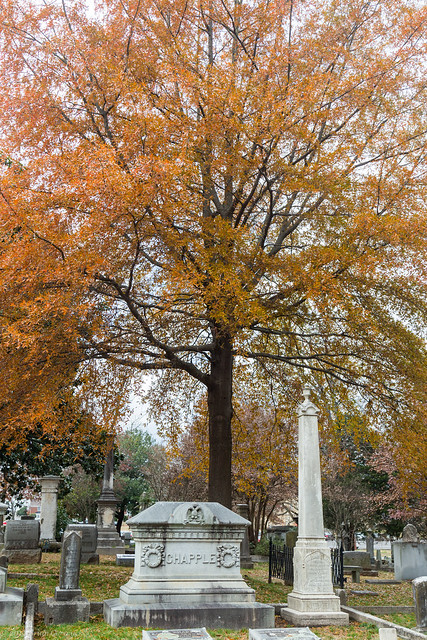 The cemetery is called the "Westminster Abbey of Arkansas" because the large number of important people who are buried here, which includes eleven governors, four US Senators, thirteen state Supreme Court justices, twenty-one Little Rock mayors and a Pulitzer Prize winning poet. They are buried there with artists, writers, slaves, soldiers and countless others that reflect the early history of Arkansas and Little Rock. 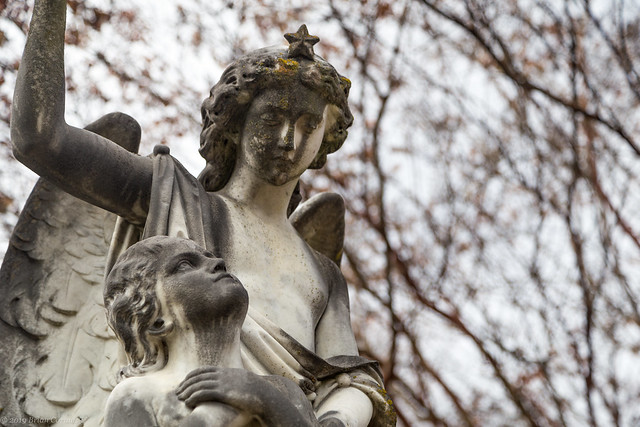 The cemetery also contains a great collection of Victorian statues and markers, which make for interesting pictures (or if you want to feel all gothic). 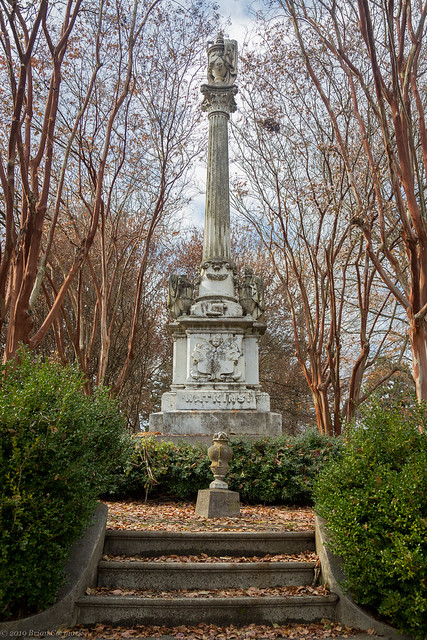 The cemetery is still open and is home to some recent burials. I was surprised to see that Jennings Osborne is buried here, but I assume that his marker isn't marked by thousands of glowing red Christmas lights. 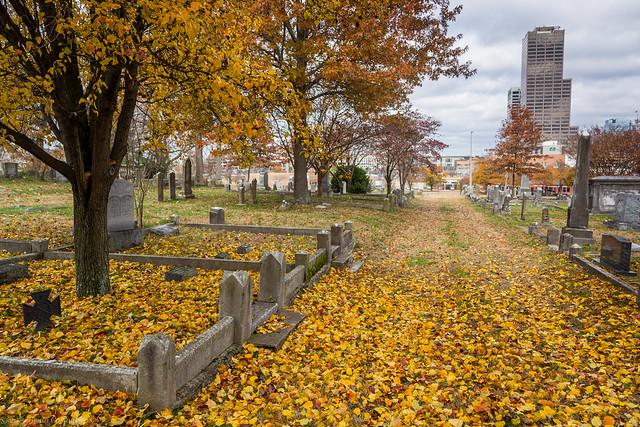 The cemetery is wedged alongside a busy Broadway and along I-630, but the sounds of the city seem to be muffled here. 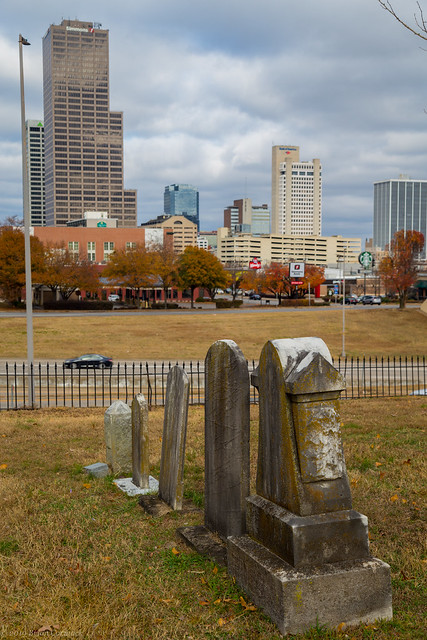 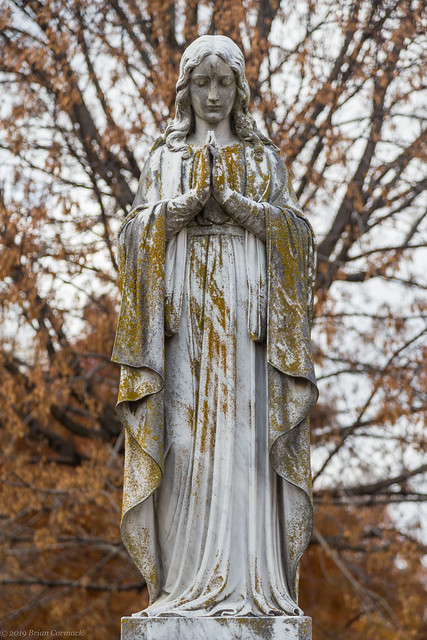 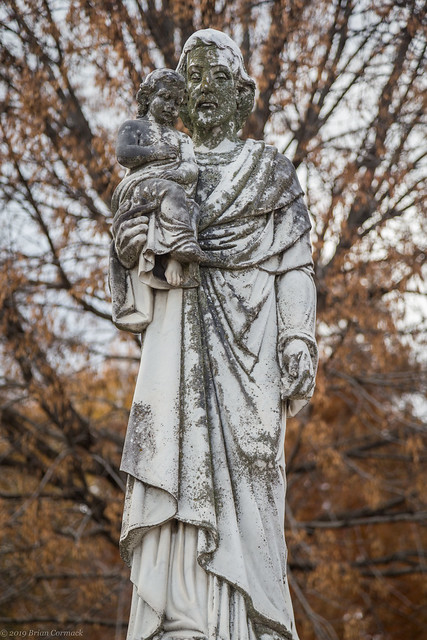 I headed out from the cemetery and drove through downtown and ended up by the Christ Episcopal Church along Capitol Avenue. The church was built in 1941, and the red side door seemed to really contrast well with the fall colors. 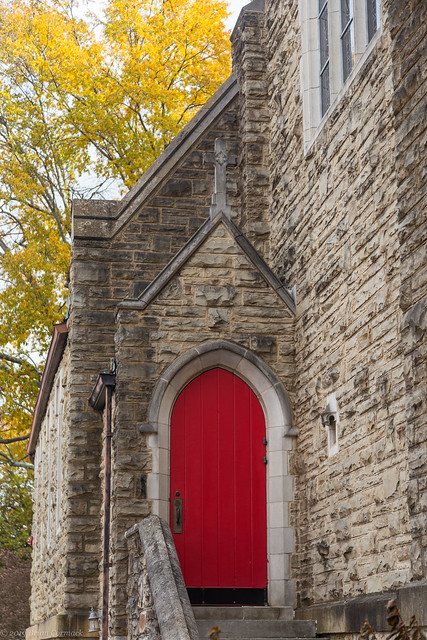 And one last shot showing Little Rock City Hall, which was flanked by two trees that were still showing off some fall colors. City Hall was opened in 1908 and used to feature a large dome, but that was taken down in 1956. 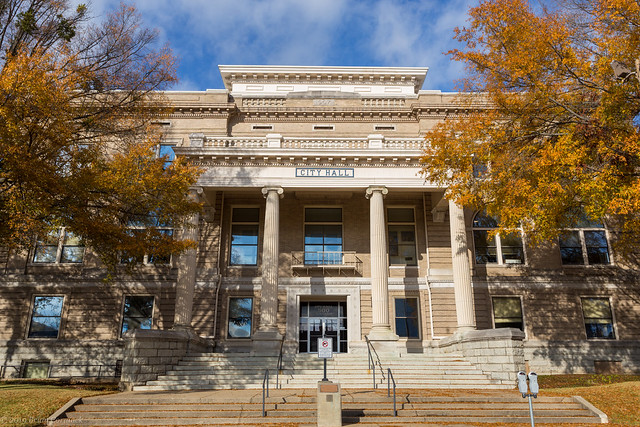 Posted by Cormackphotos at 11:34 PM No comments: