Wrong Side Of The Tracks

I headed back towards home, driving back up Hwy. 65. The sky was starting to promise a nice sunset, so I tried to find a good spot to stop along the side of the road. This was in the small town of Tillar, where the camera immediately fogged up again in the thick humidity. 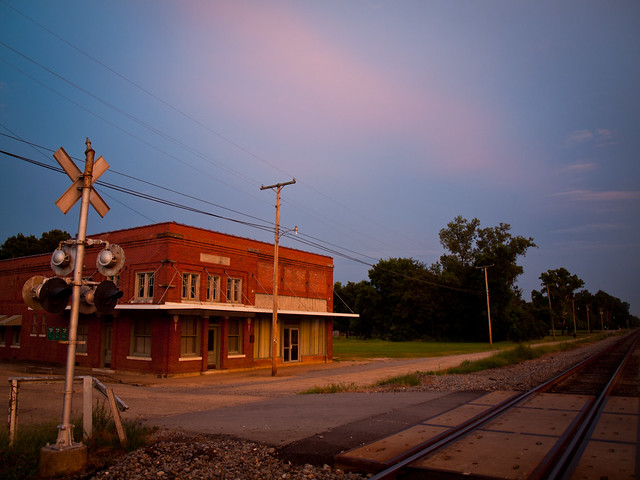 It was nearly dark as I drove through Dumas, but some good color was still lingering to the west. I sped towards a rice elevator and hurried to get some pictures. The camera immediately fogged up again. 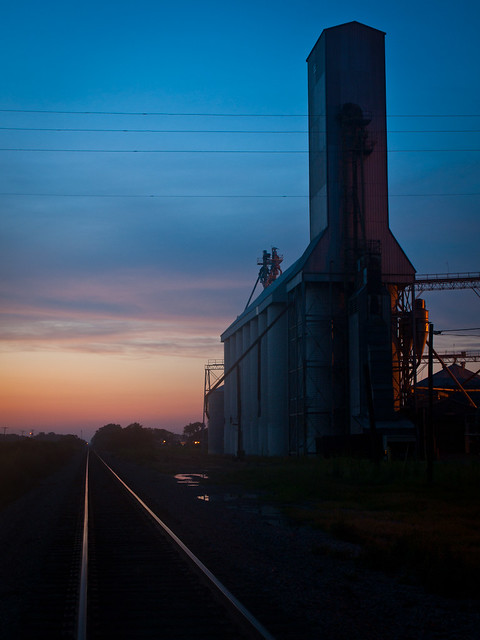 This wasn't the best place to take pictures. I decided to set up the camera and tripod right by a field, which was apparently the home to millions of mosquitoes. The quickly swarmed and attacked, probably withdrawing enough blood to make the Red Cross jealous. 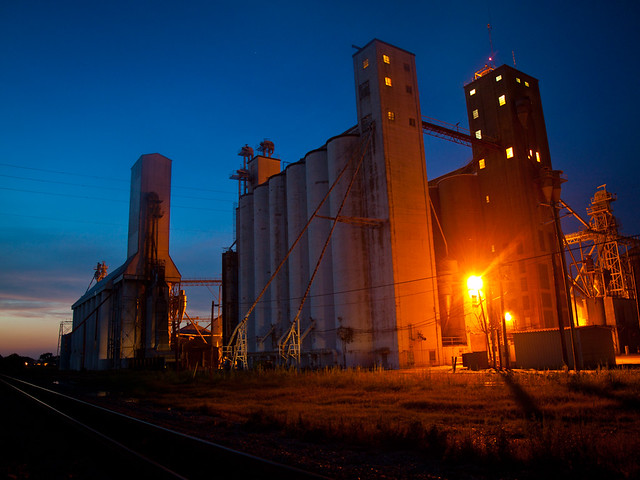 From Watson I headed south, towards the small community of Rohwer. It is now a small collection of homes, sitting on flat Delta land about five miles from the Mississippi River. But 70 years ago, things were vastly different here. During World War II, Rohwer was one of ten Relocation Centers for Japanese-American citizens, who were placed there after the attack on Pearl Harbor.

The internment camp was situated on about 10,000 acres of land, which was surrounded by dense swamps and forests. After opening in September of 1942, the camp would house about 8,000 people.

This was taken at the southern edge of the camp. The guard tower was recently built, and includes some educational signs about the camp. 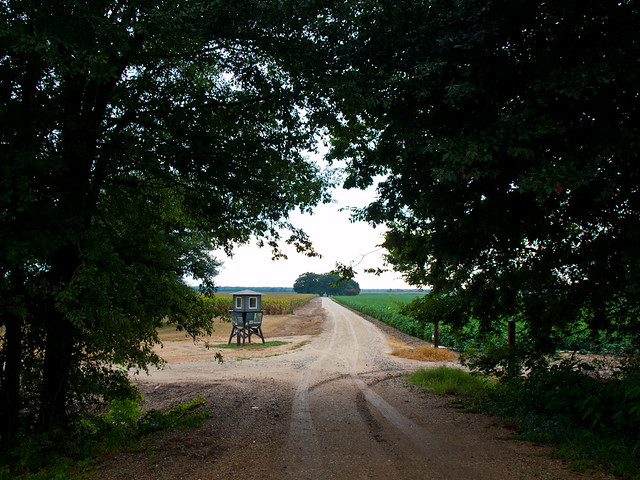 The Rohwer camp operated from September 1942 to November 30, 1945. After the war, the camp was closed and the relocated citizens were allowed to return to their homes. The barracks and other buildings at the camp were torn down, and replaced with acres and acres of cotton fields. Very little remains of the camp now. The only real reminder that there was even a camp here is a small cemetery, the final resting place of several camp residents. 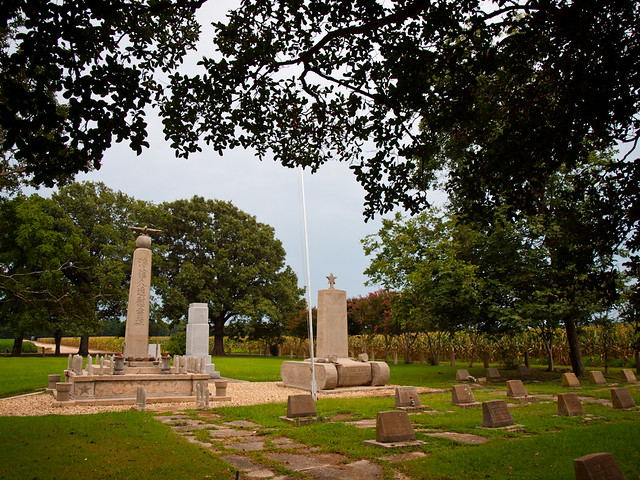 There are two large concrete markers. One is a monument to those who died while at the camp. The other marker is shaped like a tank, and honors the camp residents who volunteered, and died, to fight for the US Army in France and Italy during the war. Thirty-one soldiers from Rowher died in battle, and their names are listed on the memorial. 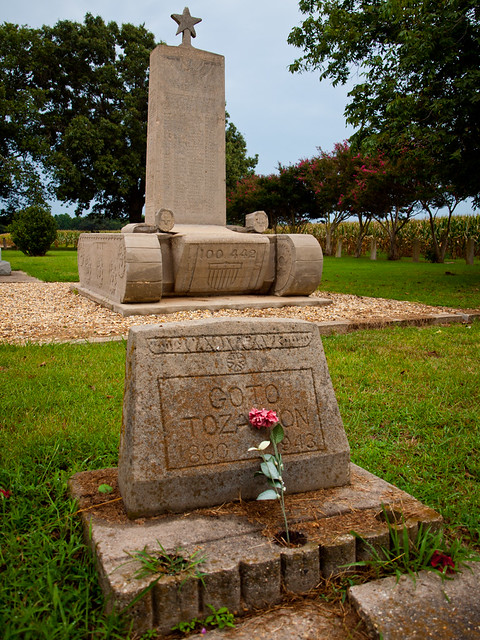 The last time I visited here, in 2010, the cemetery was showing its age. The concrete was cracked and broken, with a pool of stagnant water surrounding the markers. Since then, the cemetery markers have been restored and new interpretive signs have been installed. Several feature the voice of George Takei, who lived here for a brief time in 1942. Several of the signs have audio, sending out his voice across the quiet cemetery grounds. 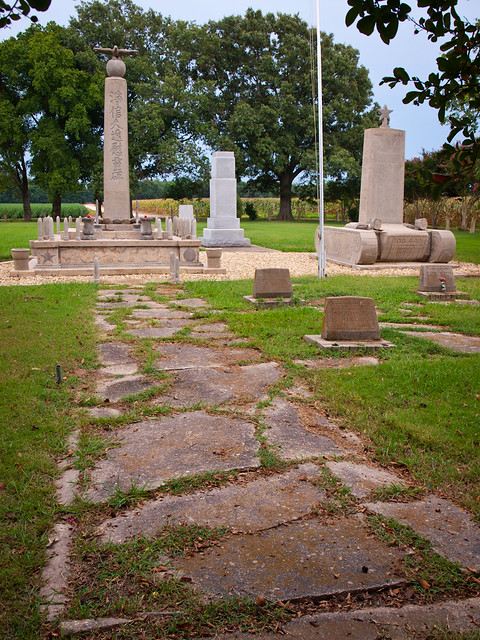 I took lots of pictures out there, after waiting for the camera to de-fog after being exposed to the thick summer humidity. I had been wanting to go back and visit this spot for several years. My grandmother grew up in the nearby town of Watson, and actually worked here at the camp during the war. She worked in the administrative offices, which were generally kept separate from the Japanese population. She needed help making ends meet while my Grandfather was in the Navy (stationed at Okinawa), and the relocation camps were one of the few places in that part of the state that were hiring. I wish I had thought to ask her more about her time at Rohwer when I had the chance. 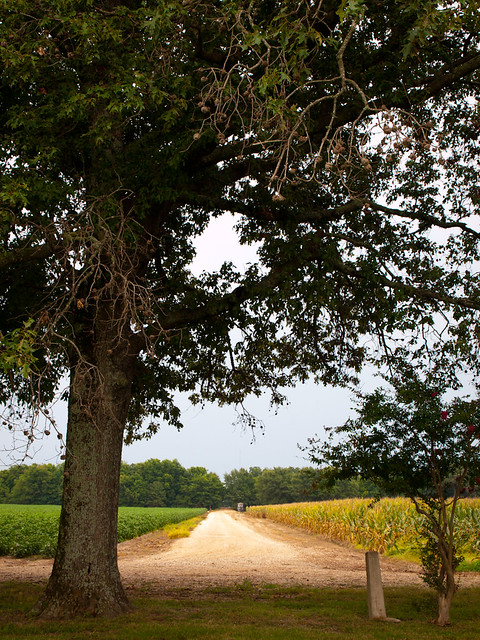 Posted by Cormackphotos at 11:28 PM No comments:

I made another drive into the Delta last weekend, traveling southeast on Hwy. 65. Past Pine Bluff, the road passes by miles of farmland and fields, broken up by the occasional small town. One of those was Grady, with a population of just 523. This is the side of the one of the old buildings along Main Street... 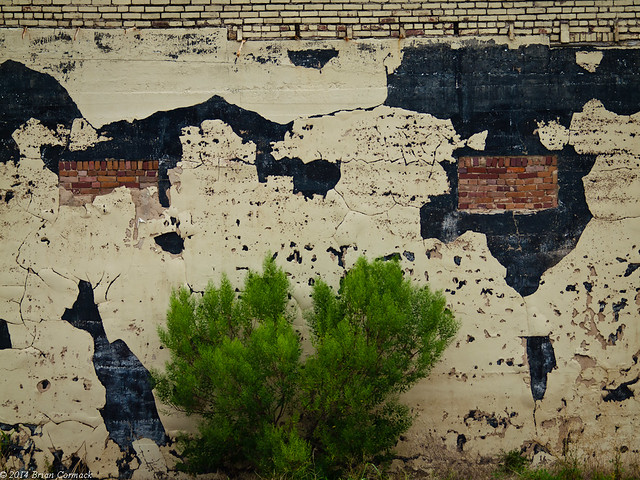 Grady is an old town, first established in 1846. There is an old train station, which may date back to the 1880s, sitting off of Main Street. 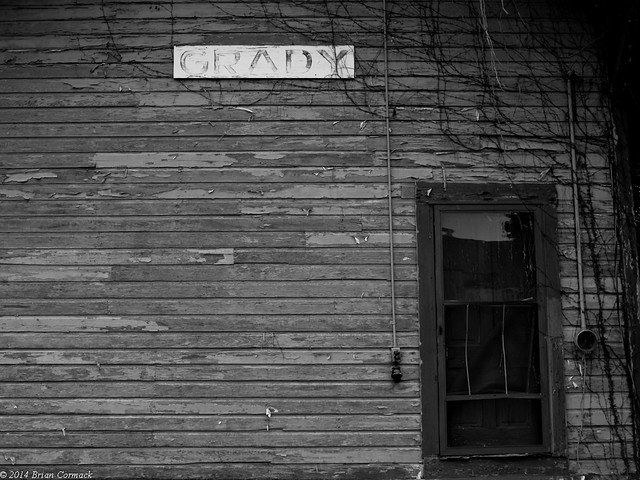 The station was built for the Little Rock, Mississippi River, and Texas Railway, which had a stop here. When Grady ceased being a rail stop, the building became the community library. The city moved into a new library, leaving the station empty. The paint is fading, and peeling off like sheets of paper. 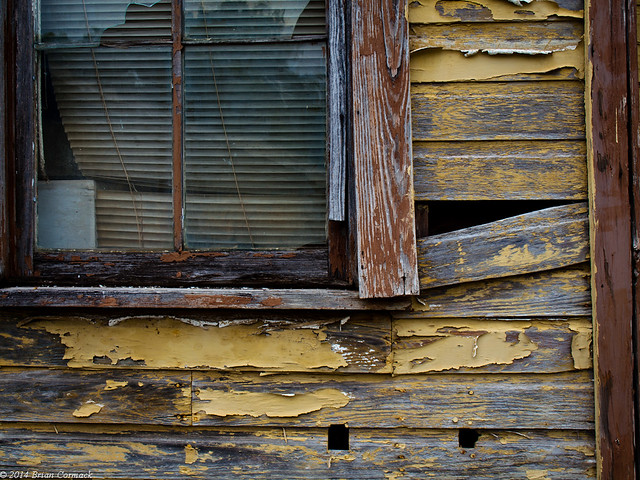 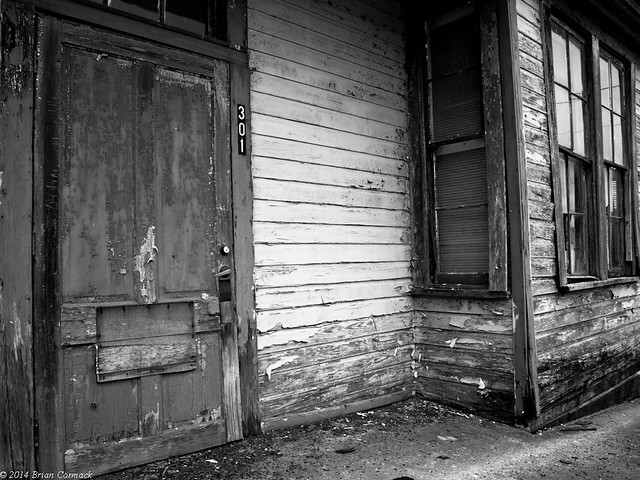 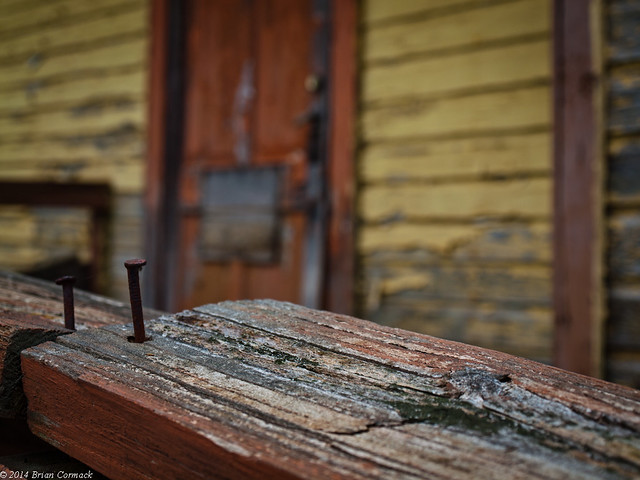 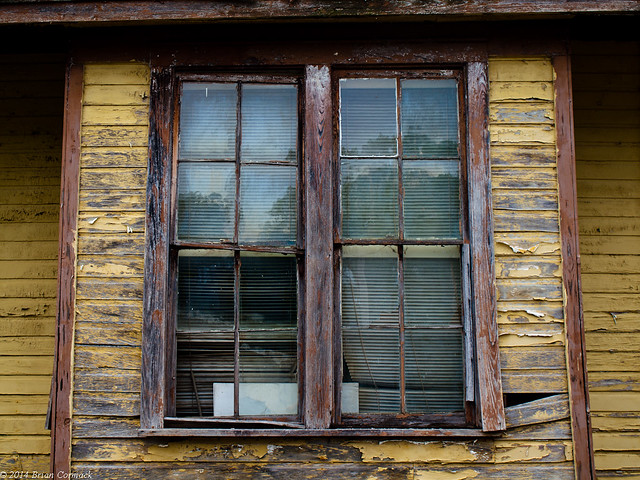 A few miles down the road is the small town of Gould, population 1,305. 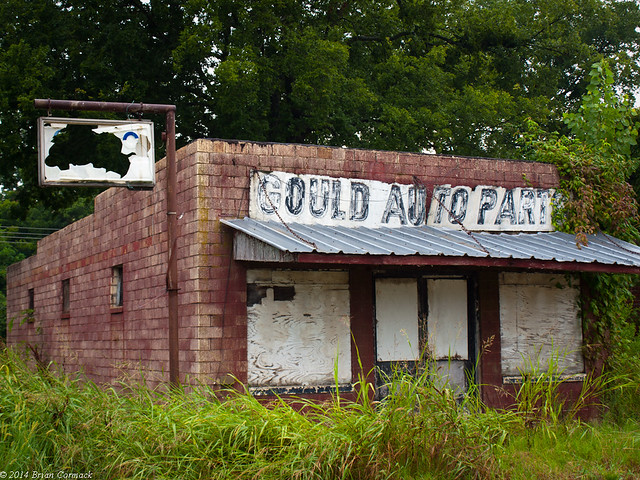 I drove deeper down into the Delta to Dumas, then headed onto Hwy. 1. The road runs along the very edge of the state, near the conjunction of the Arkansas and Mississippi Rivers. My grandmother was born in this area, in the small town of Watson. I drove through Watson, which is slowly fading away like so many other Delta towns. Along Main Street was a stretch of old buildings, which were mostly empty. There was a cafe, which I thought was closed for good but is apparently still open (Bonnie's Cafe). I was there on a Sunday, so it's not surprising it was closed. But I wish I had been there some other time because I see it gets good reviews, and reading them now is making me hungry.

Out front of the cafe were a few old car seats, inviting people to sit and look out onto an old cotton gin across the street. 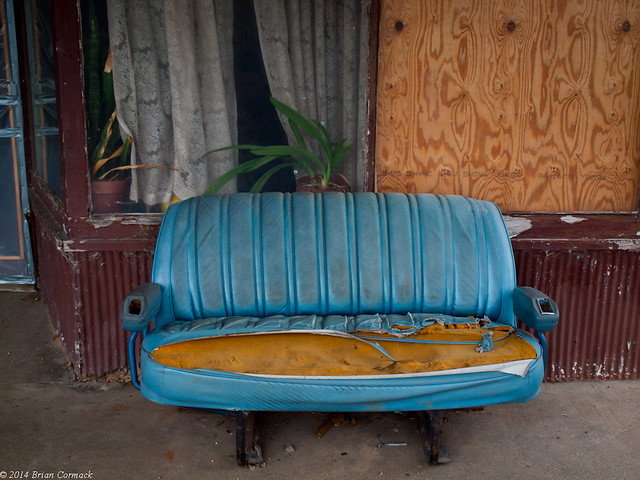 Watson is another old town. Native Americans and settlers have been in this area for centuries, in the 1600s French trappers would camp along a bayou here. The town was first called Watson Station, when the Little Rock, Pine Bluff and New Orleans Railroad put a station there. The town was briefly the Deshea County seat, after floodwater claimed the old county seat in Napoleon (which was right at the confluence of the Arkansas and Mississippi Rivers. There is nothing left of it now). 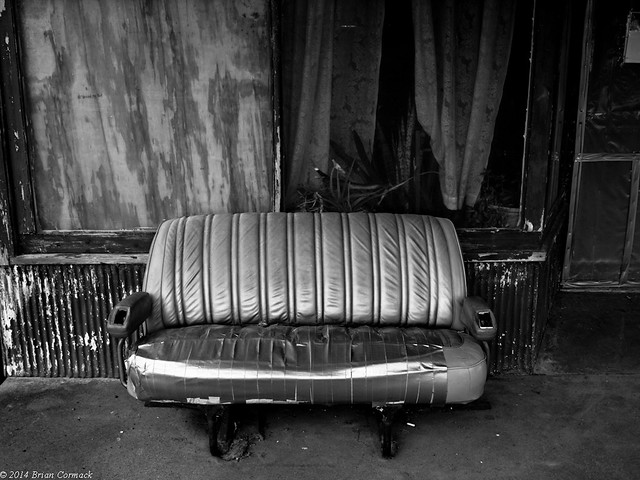 Watson was the county seat until 1880, when it was then moved to Arkansas City (and then later Dumas). 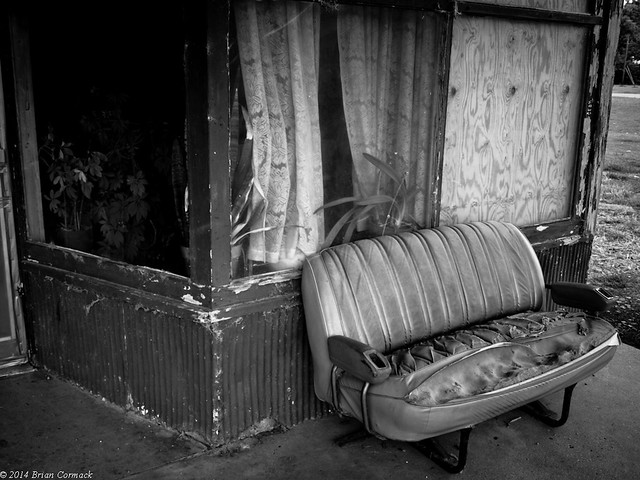 Watson would be dealt a harsh blow by the great flood of 1927. All of the area around Watson was under water for a month. A few years later there was a bad drought, and then the Great Depression. It was during the flood that my Grandmother moved from Watson to North Little Rock. Which was good for me, since that was where she met my Grandfather (while attending classes at North Little Rock High School). 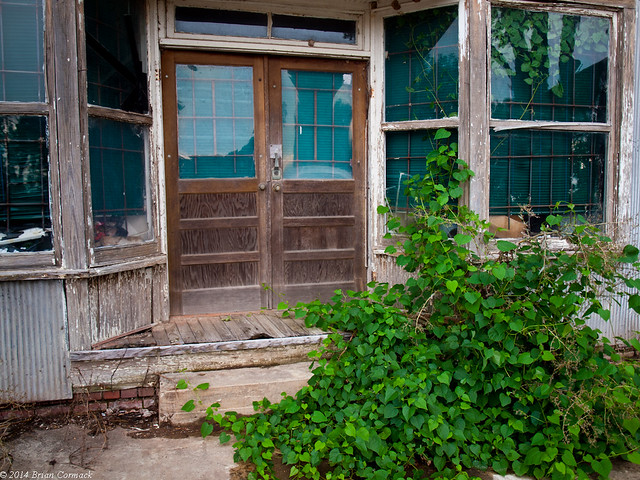 From Watson, I drove south towards another spot that has a lot of history...
Posted by Cormackphotos at 10:05 PM No comments: