Last weekend I had to run and errand in Stuttgart, so I headed out into the Delta as it poured down rain outside. I remembered to bring the camera (and the memory card, always important), so I stopped at a few places to take pictures. I drove by the old Riceland Hotel and got this shot of the building. The hotel was built in 1923 but was closed and abandoned in the 1970s. If you want to see some shots of the hotel's interior, check out this post from 2017. 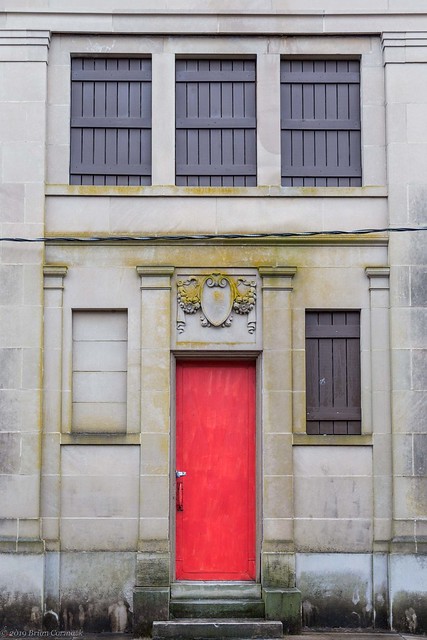 Stuttgart is known for two things - duck hunting and rice farming. It is the home to Riceland Foods, the largest miller of rice in the world. So it's no surprise that there are several buildings dedicated to processing and storing rice located throughout town. This tall silo (at least I think that's what it is) sits right in the middle of a residential neighborhood, but I don't think it's used much anymore. 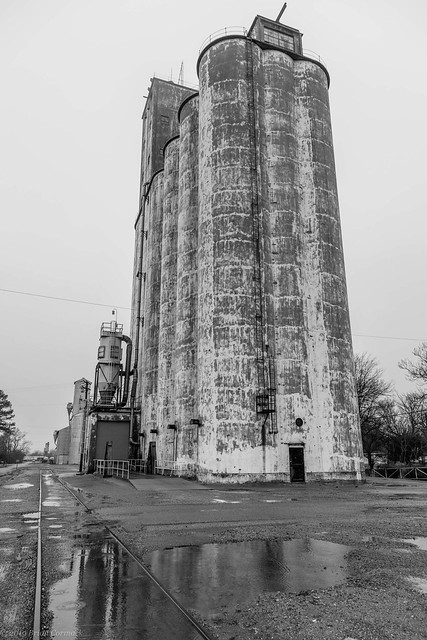 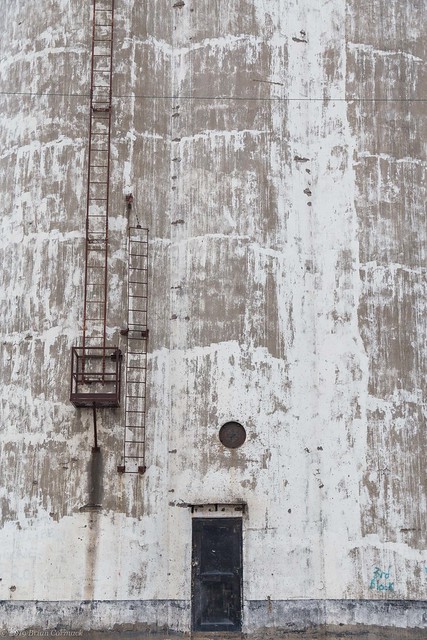 Nearby were these old disused railroad tracks, which were collecting the rain water. 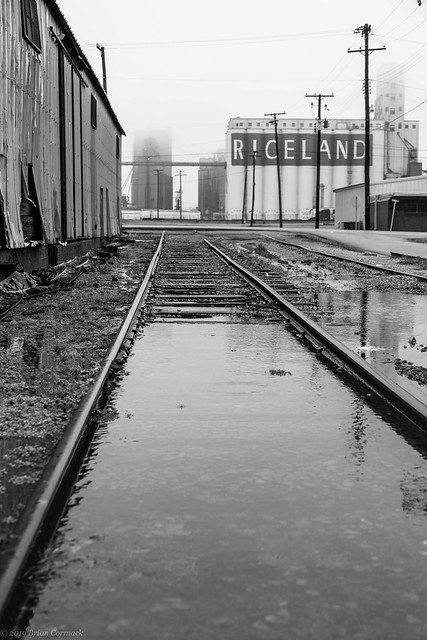 Stuttgart was incorporated in 1889, and the first mayor was a grandson of Davy Crockett. 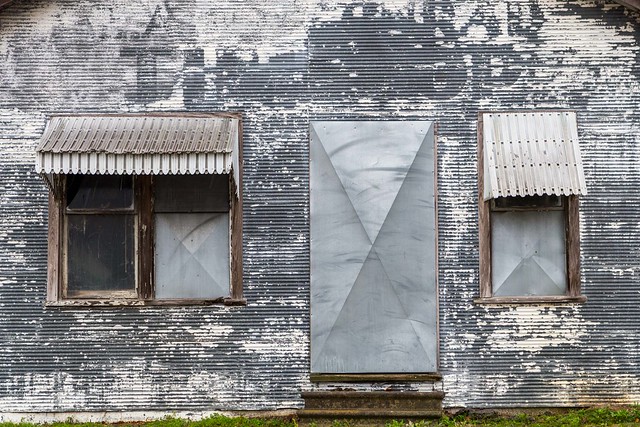 It was pouring down rain when I was there, in fact it was enough that there was a flash flood warning for the area. Both the camera and I got soaked taking pictures of this abandoned gas station. 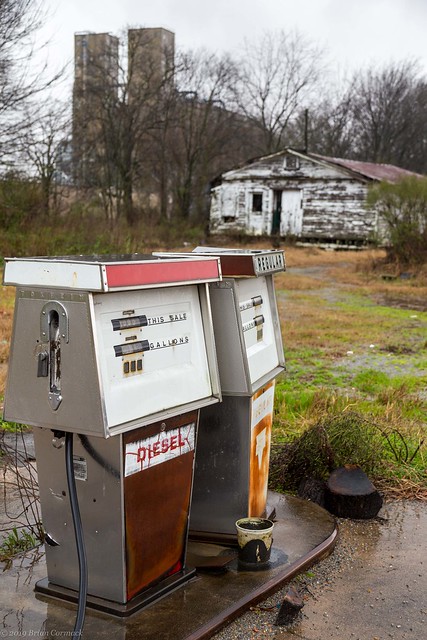 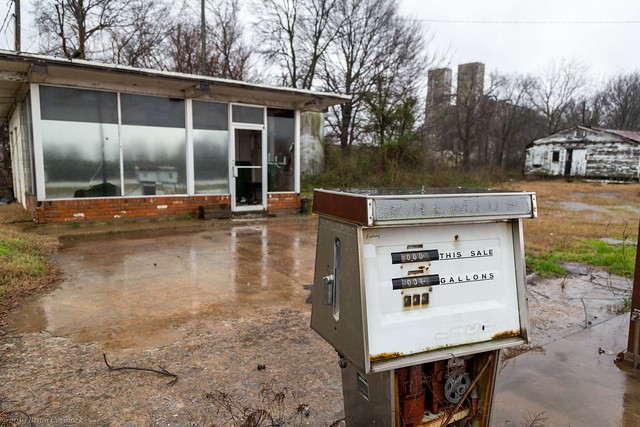 In fact if you look closely, you can see the raindrops pounding the top of the old gas pump in this shot: 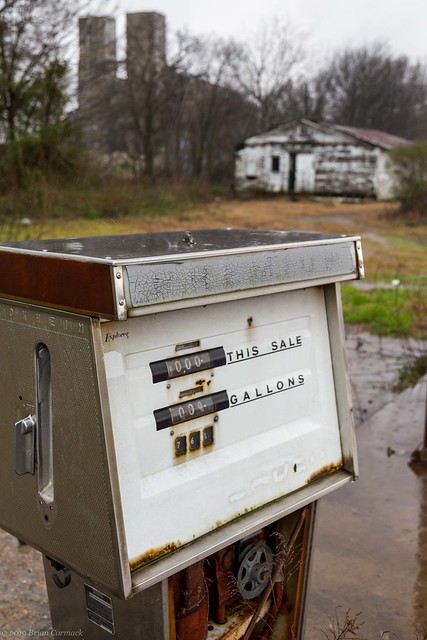 After that I ducked back into the car and tried to dry the camera off, and then headed off to get a few more pictures before heading home. Those photos coming soon - same blog time, same blog channel!
Posted by Cormackphotos at 10:35 PM No comments:

I had the day off for Presidents Day (thanks Obama!) and decided to spend my time off doing my two favorite things - napping and taking pictures. So after seeing Jonah off to daycare, the dogs and I crawled back into bed and snoozed for a few hours.

Later on I grabbed the camera and drove out to a few places southeast of Pine Bluff. The first stop was this old house, empty and covered with faded and peeling paint. 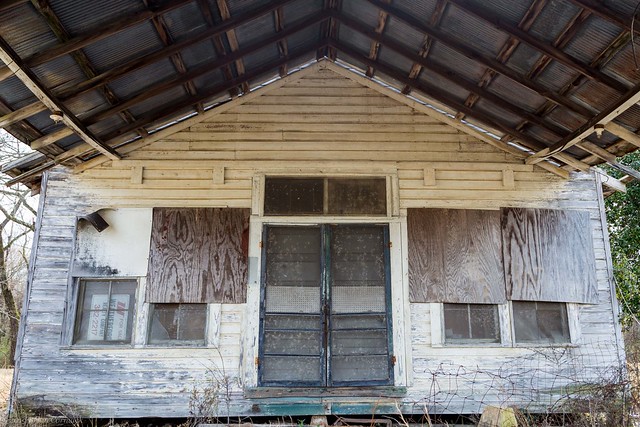 Nearby was this old general store, long closed and boarded up. I didn't commit any crimes when I was briefly there taking pictures, I did not want to incur the full wrath of the Farm Bureau. 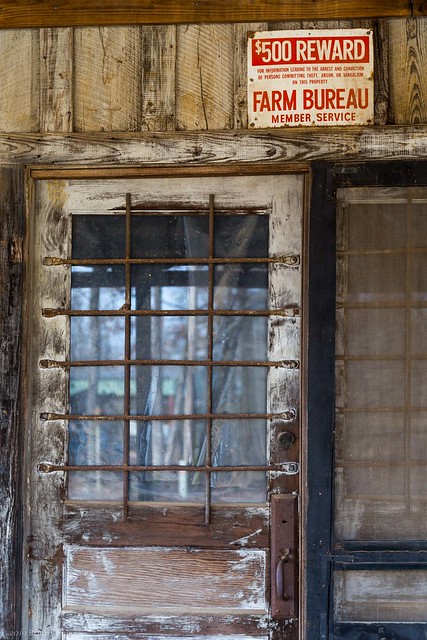 Down the road was this old cotton gin, which was covered with vines and had partially collapsed. 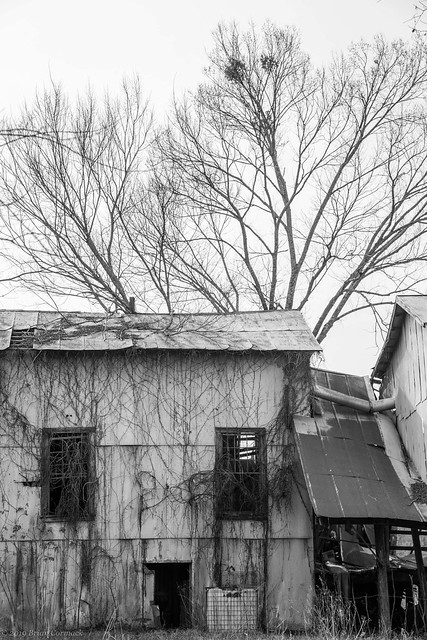 And also nearby was this old church, which seems to have been abandoned now for several years. Even though the front door of the church was open, the entrance was guarded by overgrown pine trees. I managed to take a peak inside, but the pictures didn't turn out. The vacant church interior was littered with old bulletins and other debris. The windows were made of red stained glass, which cast the old sanctuary with a reddish hue. 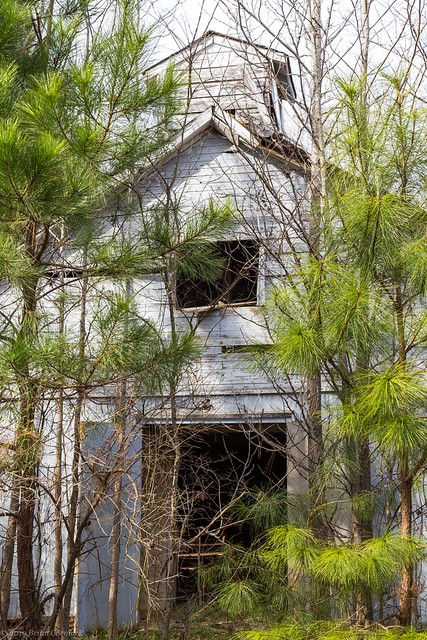 While heading back to Pine Bluff I stopped at this old barn, which looked neglected. The metal siding was peeling away, revealing its wooden skeleton. 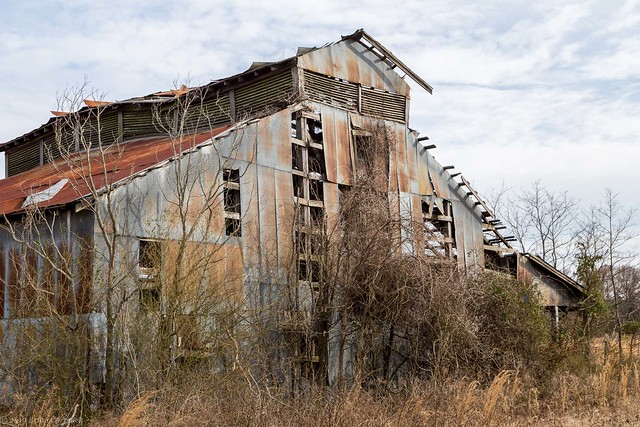 Inside it looked like the barn's last use was for storage, and there were a few old kids toys laying haphazardly in the mud. 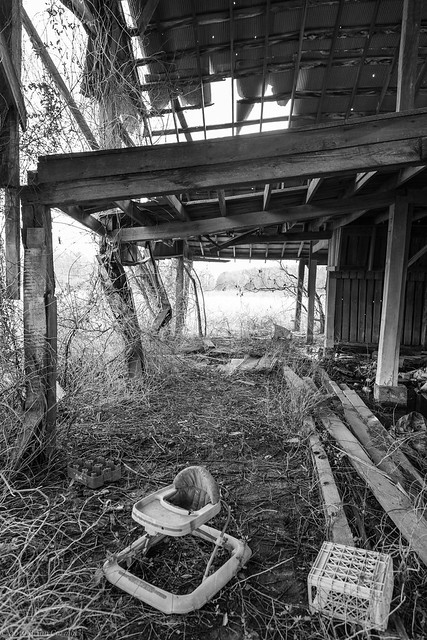 I didn't linger there too long, I felt the intense gaze of the Farm Bureau following me like a hawk. 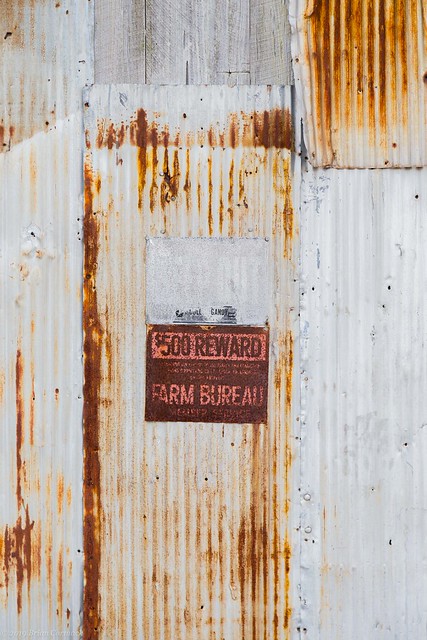 I drove back into Pine Bluff, which has a great collection of old buildings. I drove through downtown and got a few pictures. But was the Farm Bureau even watching me here????? 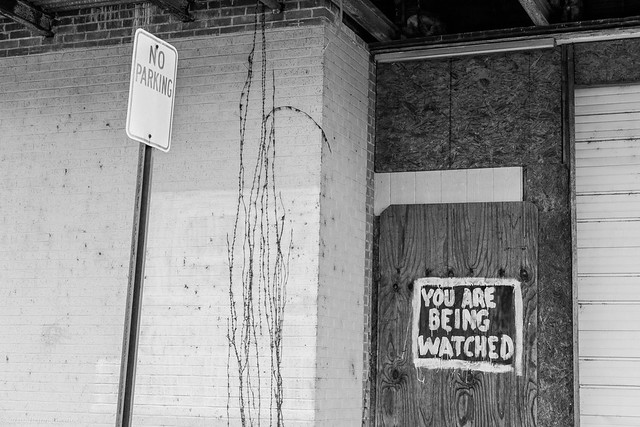 I didn't stay too much longer, for fear the Farm Bureau would catch me and throw me in their jail (which I assume is guarded by cows and sheep?). I snapped one more shot from Pine Bluff, of the side of two old buildings that front Main Street. 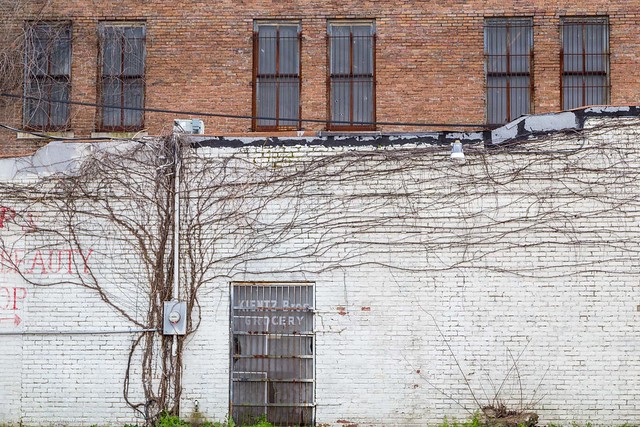 Before heading home I made one last stop - at the Lorance Creek Natural Area. The nearly 525 acre preserve protects the Lorance Creek area, which contains both a cypress-tupelo swamp and some pine-covered upland areas. The swamp areas were once common across eastern Arkansas, but the majority of them were drained and turned into farmland. This wooden boardwalk extends out into the murky waters of the swamp. 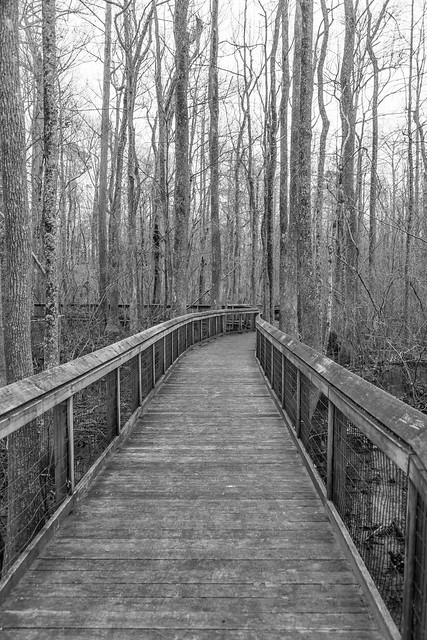 And one last shot, looking up at the broad canopy of tree limbs that shrouds the swampy waters. 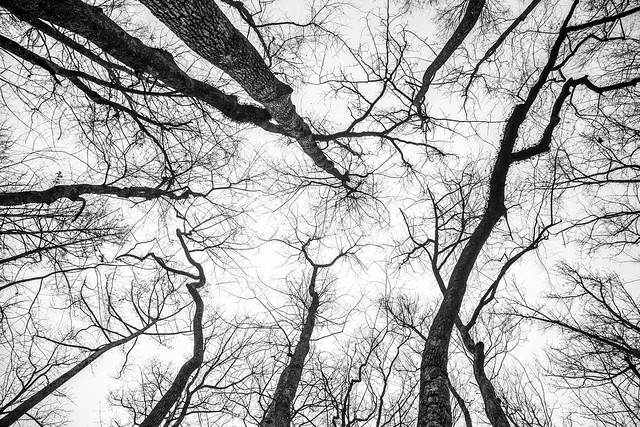