I was heading up to the Ozarks, and decided to make a quick stop at Longpool on Big Piney Creek. The Big Piney is only about 67 miles long, but it packs in a lot of great scenery. It's no surprise that it has been designated as a National Wild & Scenic River (one of 8 in the state that have that designation, which includes Hurricane Creek which is a tributary of Big Piney).

Longpool is a Forest Service campground, and it has a nice swimming area that is guarded by a collection of large boulders sitting in the emerald water. 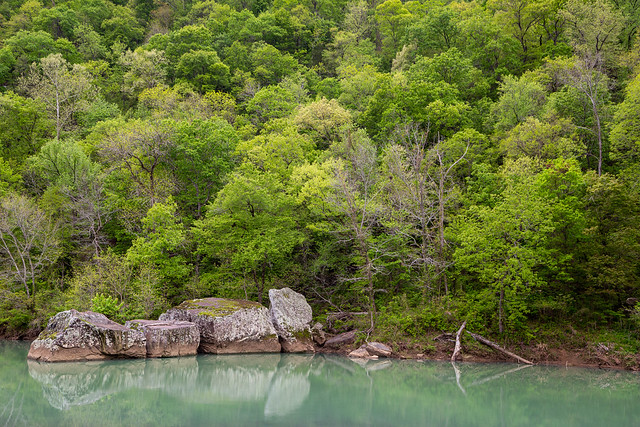 And the road that curves through the woods, by a few camping areas. This is a great place to camp... 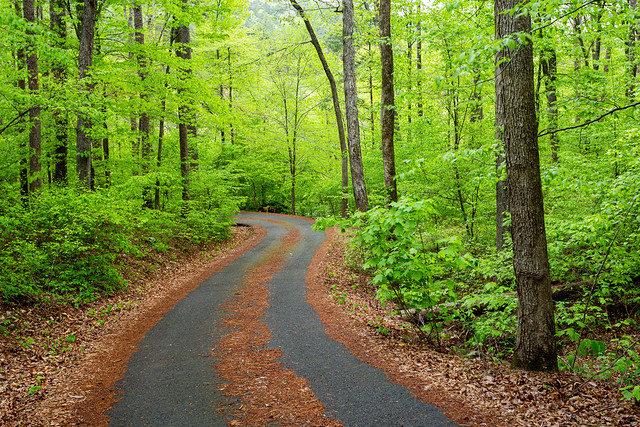 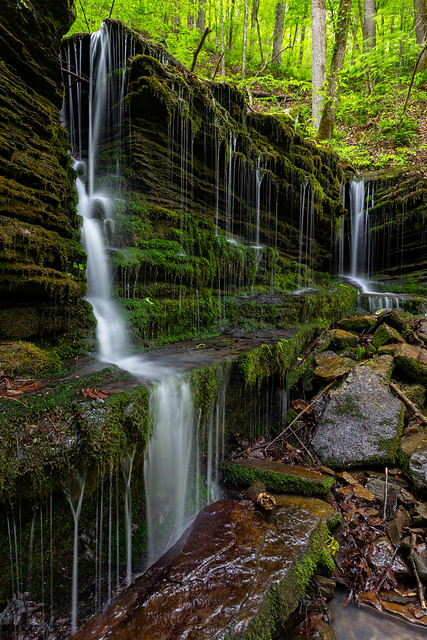 This parking deck, which sits in the shadow of the Regions Bank Building in downtown Little Rock, was completely empty. Which wasn't surprising since we're in the middle of a pandemic and it was also a Friday night and any workers would have long since headed home. It was still a bit eerie driving up the ramps past hundreds of empty parking spaces (at least I didn't have to pay to leave, which was nice). But the parking deck did have this nice view looking south, as traffic headed through the intersection of Broadway and Capitol Avenues. 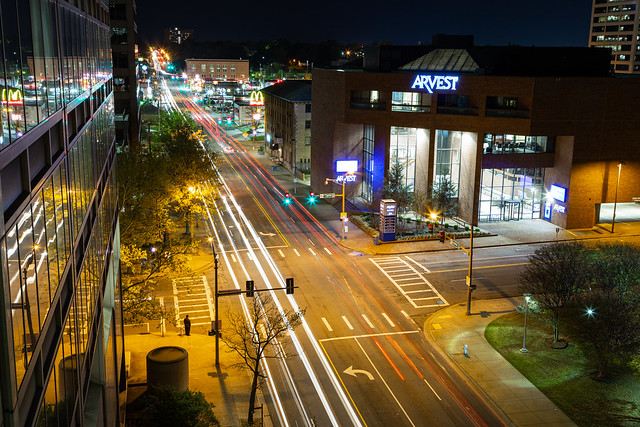 And then the view looking north, with the lights from cars heading to and from the Broadway Bridge... 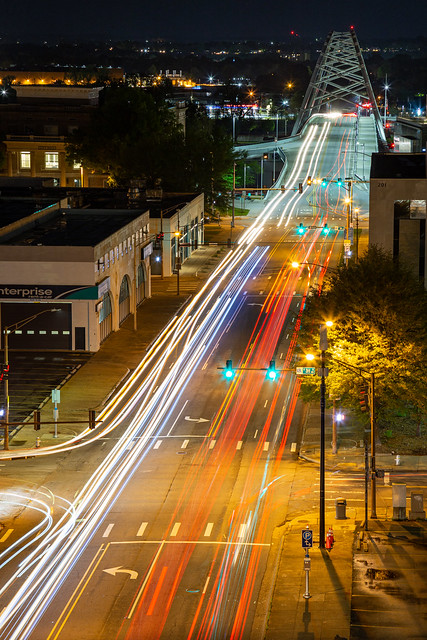 Down By The River

Amazingly, I managed to not slip and fall into the river the other night while trying to navigate the pointy rocks that line the river below the sidewalk in Riverfront Park. But at least it did provide this view of the Little Rock skyline, framed by the branches of an old tree that leans out over the water. 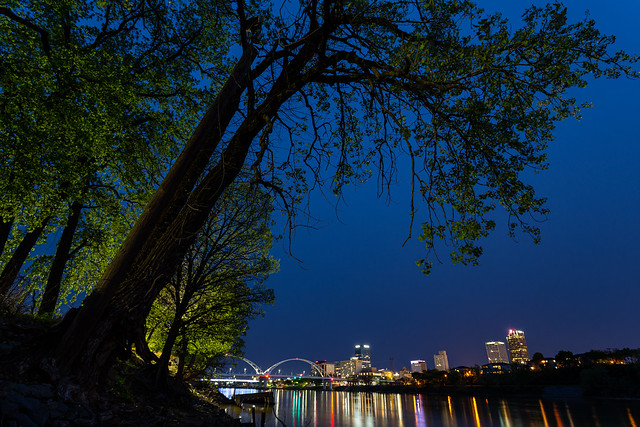 Posted by Cormackphotos at 11:09 PM No comments:

It was a nice, pleasant evening when I parked the car and walked over to the new Broadway Bridge in North Little Rock (yes, I know it's technically the Veteran's Memorial Bridge now but old habits die hard). A few people zoomed by on scooters but otherwise it was quiet along the walkway, and I set up the tripod and got a few pictures.... 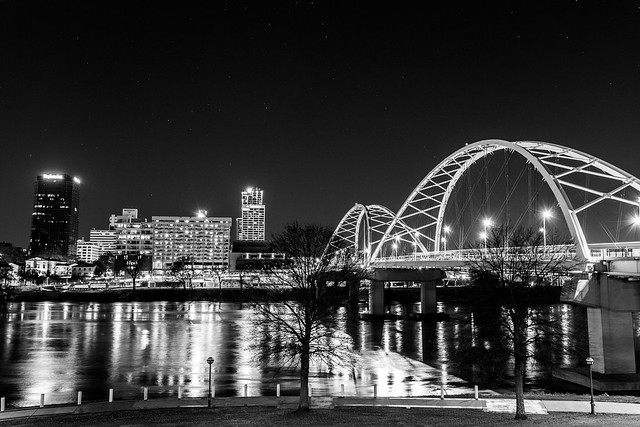 And a view from closer to the river, where a light breeze ruffled the water. 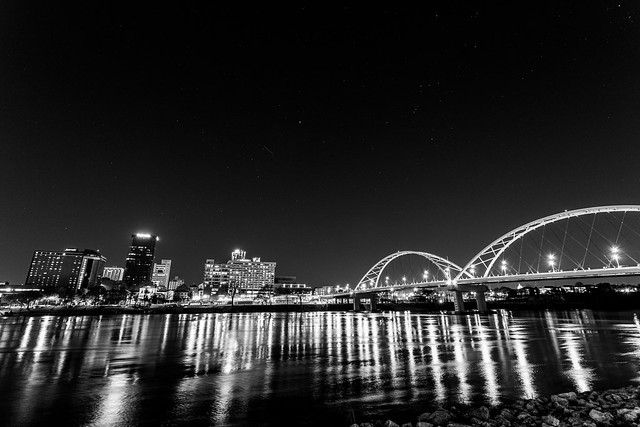 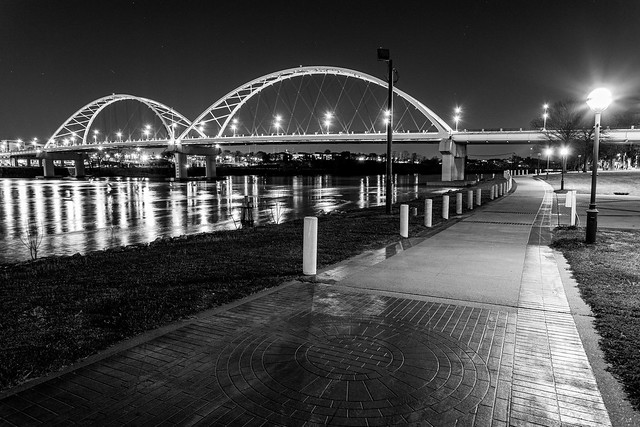 And walking further down the sidewalk in the park takes you underneath the Main Street Bridge. The fisheye lens helped with this view, as traffic rumbled by overhead. 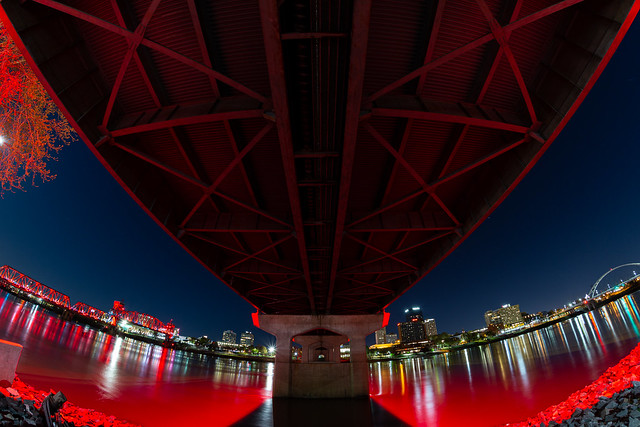 From there I headed across the river and went to the top of a parking deck, which provided this view of the intersection of Main and Third Streets. 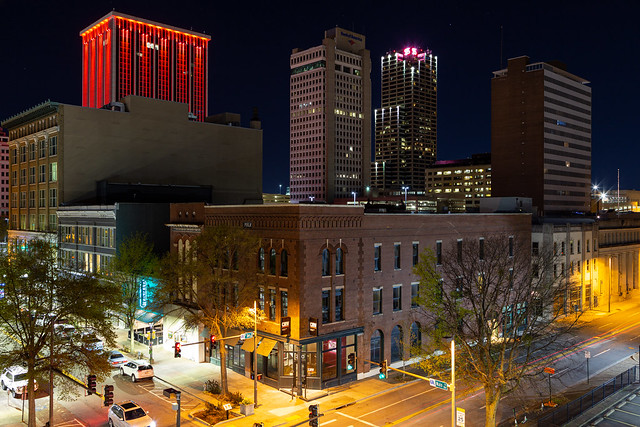 And then a few blocks away I stopped to get a shot of one of my favorite buildings in downtown Little Rock - the Center Place Building. It was originally called the Union Life Building and was built in 1916. The narrow 12-story tower has a dominating presence, which isn't surprising considering most the of buildings around it have been torn down and replaced by parking lots. But it does share the block with Dave's Place - a great little place to eat. 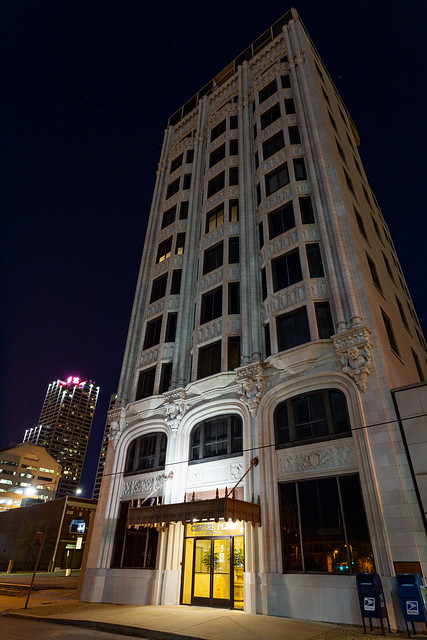 Posted by Cormackphotos at 10:52 PM No comments:

The last post here, the one with a bad pun in the title, was actually the 1,000th post here on this little blog. This blog got started way back in 2006 on MySpace, and I ended up moving it to this platform a little bit later (and probably losing any views from Tom, my MySpace friend). In the years since then, I've tried my best to share photos from lots of different places across Arkansas. There have been lots of posts about waterfalls (such as Bowers Hollow Falls, Cedar Falls, Triple Falls, V-Slot Falls, Twin Falls at Richland Creek, Haw Creek Falls, Glory Hole Falls, Bingham Hollow Falls, Cossatot River Falls and Ladderbucket Falls). 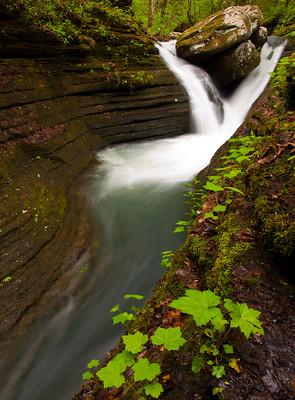 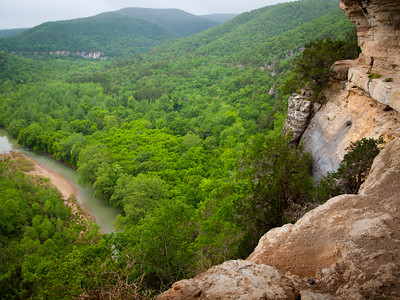 And further afield, it has shown a few pictures from visits to places in Tennessee, Missouri, Texas, Louisiana, Illinois, New York, Massachusetts, California, Oregon, Washington (state and D.C.), New Mexico, Arizona. And not to mention a few photos from Ireland, France, England, Mexico and Canada. 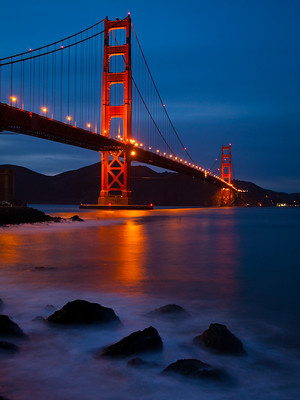 And the past few years have been spent driving across the Delta for a photo project, that will hopefully someday find a home in an exhibition (it was supposed to have been on display last year, but that was postponed due to stupid Covid). But that means you can also find lots of photos of neat places in Pine Bluff, Stuttgart, Cotton Plant, Scott, England, Clarendon, Rohwer, Brinkley and Carlisle. 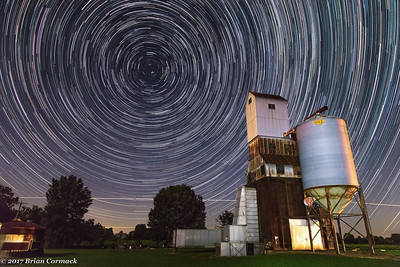 I went back and looked at all the old posts the other day (and definitely cringed at how rough some of my older photos are), and started keeping track of which places I posted about the most. Unsurprisingly, most of the posts were of Little Rock since I live here and grew up in North Little Rock. So I broke it down into specific places in the city and within the Buffalo River (another well-trod location). So here is a breakdown of the places that have had the most photos posted on this blog:

With 41 appearances, it's a tie between the Big Dam Bridge and the Arkansas State Capitol. It's not surprising that the Big Dam Bridge clocked in with so many posts. I used to live by the bridge and would travel out there anytime it looked like there would be a cool sunset or maybe some fog. 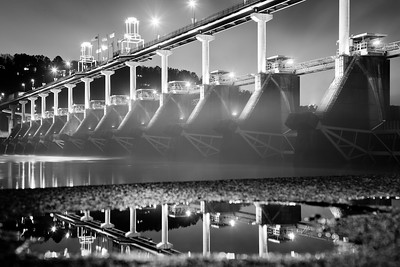 Next on the list is the Junction Bridge, which appeared in 38 posts. 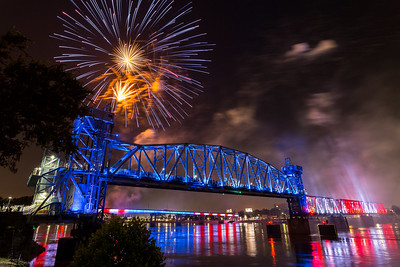 After that it is Boxley Valley, with 26 posts 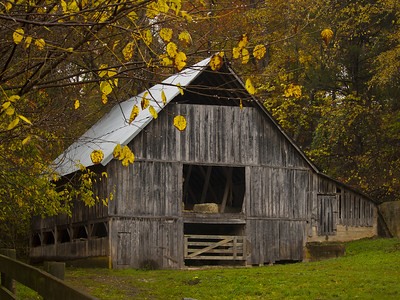 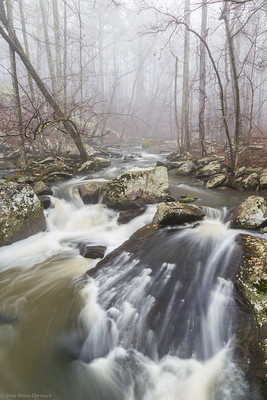 Richland Creek and Falling Water Creek aren't that far behind with 24 posts. 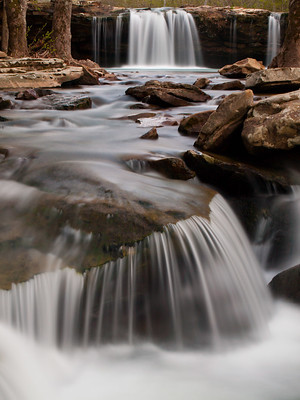 The area around Scott has 21 posts. 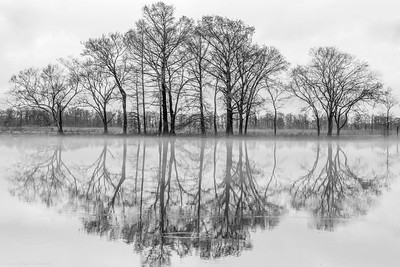 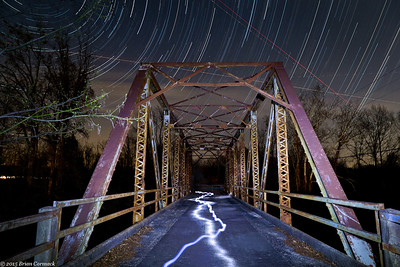 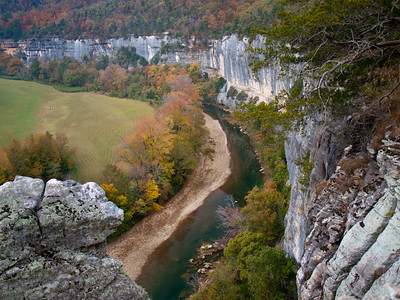 Along with 18 posts for Hot Springs... 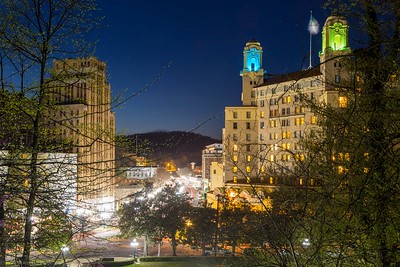 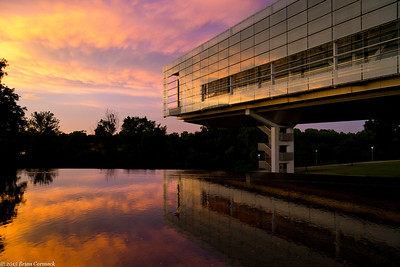 And I wouldn't be a true native of North Little Rock without having at last 17 posts of the Old Mill. 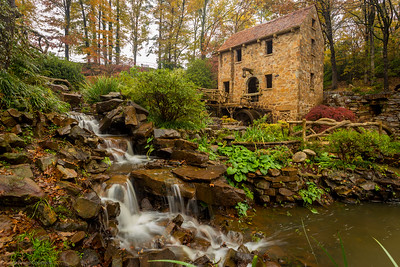 The most commented post so far has been this one from 2009, with photos from of the ruins of the old barracks at Fort Chaffee on a cold and frosty morning. 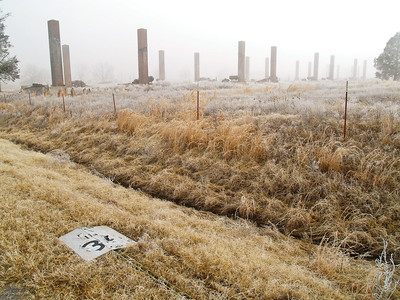 I have to admit that it's often hard to think of things to write about here. It always helps to at least have something mildly interesting happen that makes a decent story. That said, I think one of my favorite posts was this one about my failed attempt at hiking to Twin Falls at Richland Creek. 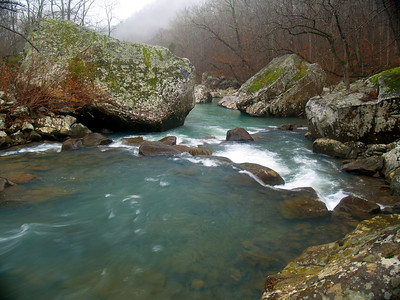 And to anyone who has made it this far, I would like to profusely thank y'all for reading this blog. The Internet is littered with all sorts of abandoned photo blogs, but I'm going to try my best to keep this one going for as long as I can take new pictures and write up some nonsense about them. And speaking of photo blogs, I've added a few other active photo sites onto the side of this blog. If you have one, or if you know of any other ones, please let me know and I'll add it. Thanks!
Posted by Cormackphotos at 10:45 PM No comments: