Down By The River

I headed out one night last week to take a few pictures, and ended up driving through downtown. I was a little surprised at how busy it was, there were lots of people out walking and cars crammed into any parking space available. The answer was soon obvious - the crowds were out to see Hamilton at Robinson Center. I headed across the river to North Little Rock where it was quieter and walked through Riverfront Park. 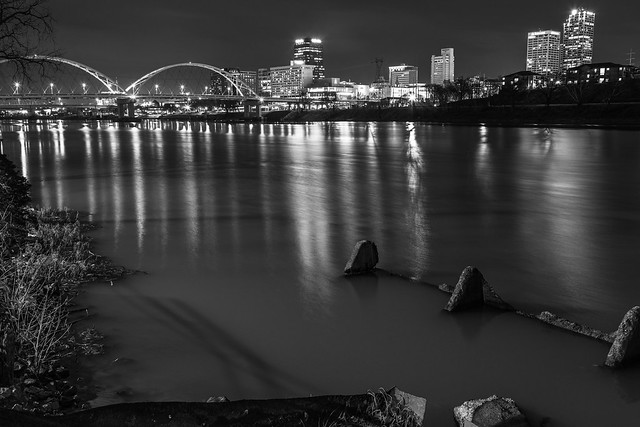 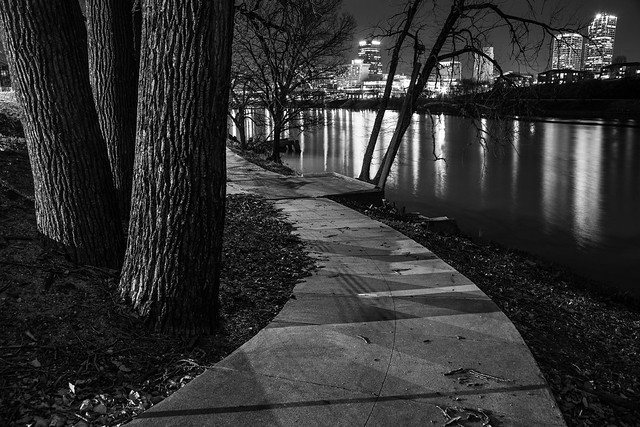 I set the camera up by the Baring Cross Bridge and hoped to catch a train crossing over the river. The first bridge here was built in 1873, and was the first bridge to span the Arkansas River at Little Rock. That bridge was washed away by floodwaters in 1927, and was rebuilt in 1929. A lift-span was added in the 70s to allow for barge traffic, and the bridge is still used by Union Pacific and Amtrak rail traffic.

I waited and waited for a train to show up. I was tempted to leave but I knew that as soon as I took the tripod down and walked back to the car that a train would show up. I waited about an hour, which was not the most exciting way to spend the evening (the people at Hamilton had much better entertainment). But finally a train did appear and crossed over the bridge, leaving behind these streaks of light from the locomotive. 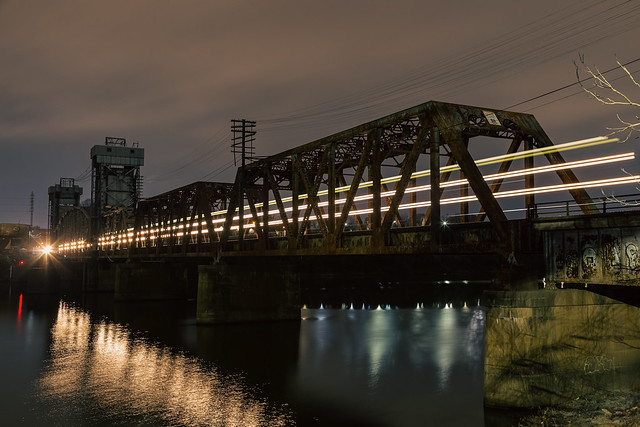 After that I headed back across the river and drove around some, eventually ending up by the old Albert Pike Hotel. The hotel was built in 1929, but has since been converted into apartments. This is the last shot from the night, only because I forgot to charge the camera battery and it was running on empty. 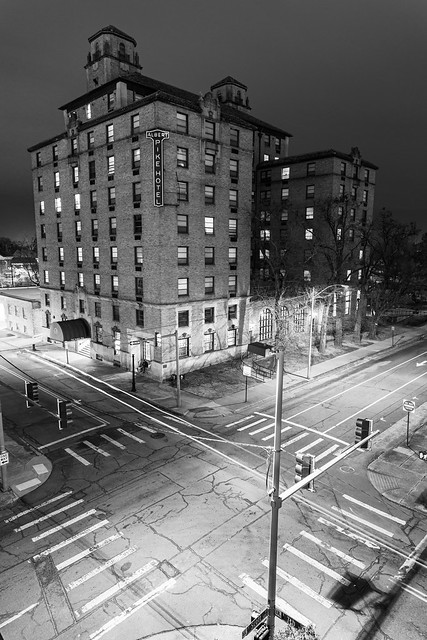 Last week, there were some interesting clouds in the sky so I headed downtown to try to get a few pictures. I think the clouds were part of the system that ended up dumping some sleet and snow, which still hasn't all melted away. Anyways, I headed to the top of a parking deck to see what view it had, and got out the camera. 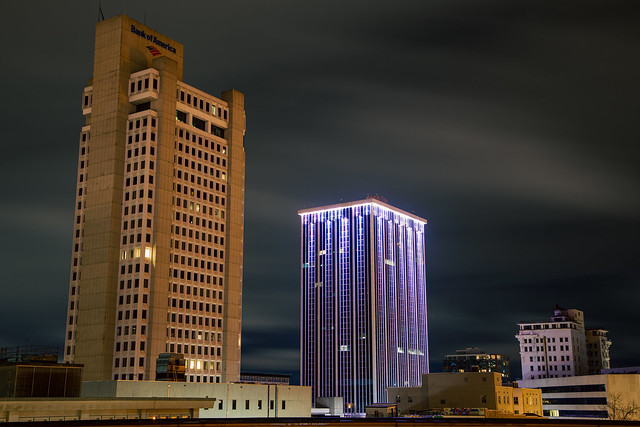 The deck also had this view of the old Cathedral of St. Andrew, which was built way back in 1881. 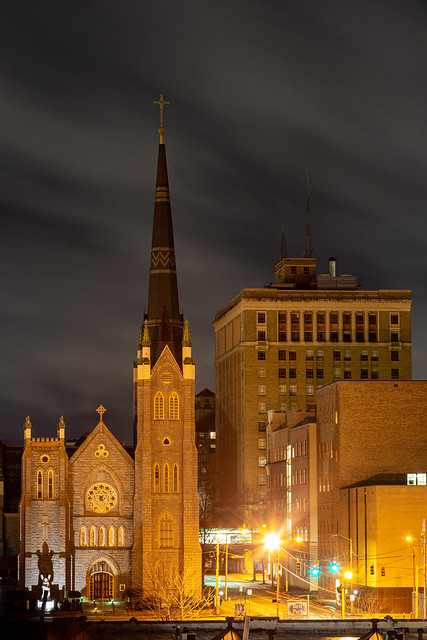 And then this view of the Simmons Tower, which is reflected in the windshield of my car (perhaps I should have photoshopped out some of the dirt to make it look cleaner). 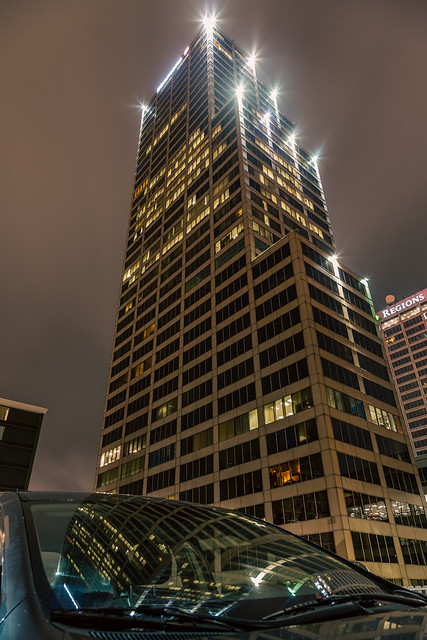 I headed back to the street and ended up stopping by the new Broadway Bridge over the Arkansas River. This is the view framed by the big trees that are growing right along the edge of the river. 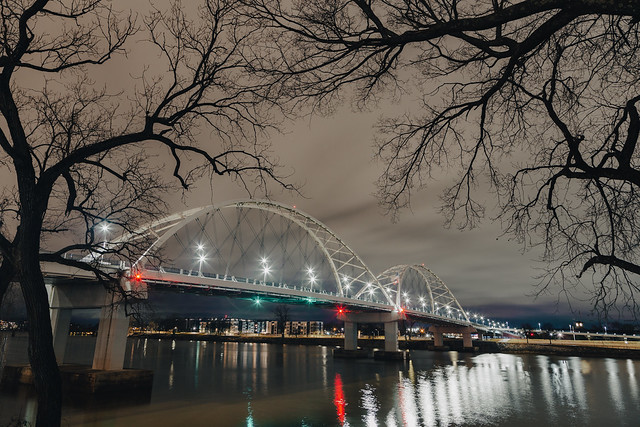 And one last shot, of the clouds passing over the historic Union Station (built 1921). After I took this I headed home, passing by crowded grocery stores as people were hurrying to buy their milk and bread before the icy weather hit. 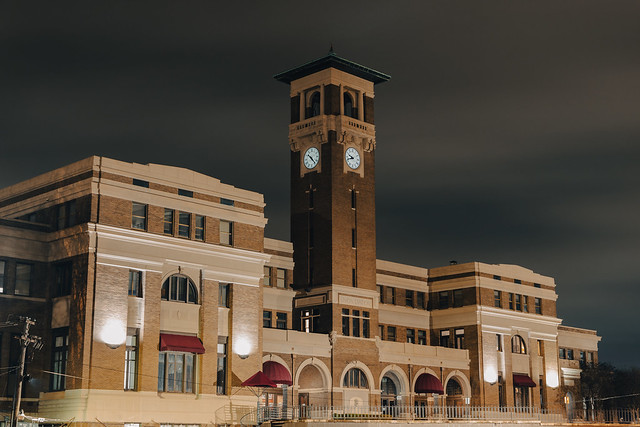 Posted by Cormackphotos at 10:48 PM No comments:

After taking pictures in Tucker, I headed south through the small town of Sherrill. Off the main road was this old building, with a twisty old tree growing right up beside the rusted tin. 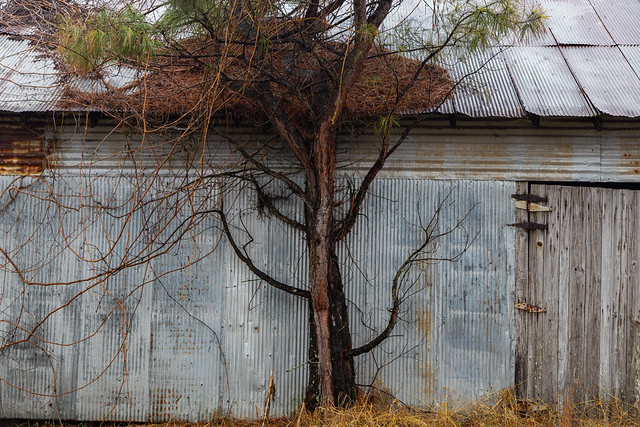 From there I crossed over the Arkansas River into Pine Bluff. I drove through downtown, and got a picture of this building that contains an insurance company. It was a bright spot of color on an otherwise drab and cold winter day. 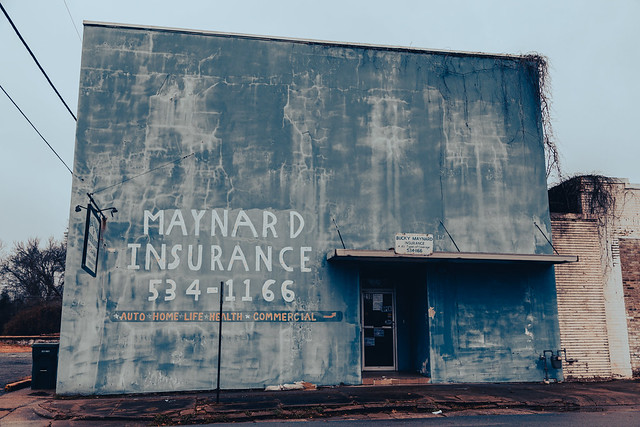 There is some spectacular architecture in Pine Bluff, including some great places like the Saenger Theater and the Hotel Pines. One grand old building is the old R.M. Knox House, which was built way back in 1895. It is considered to be one of the finest examples of Eastlake Victorian architecture in the state, with its intricate woodwork and three-story tower. However, the building has been deteriorating steadily over the last few years. I try to take pictures of it whenever I'm in Pine Bluff, because I'm scared it won't be around much longer. 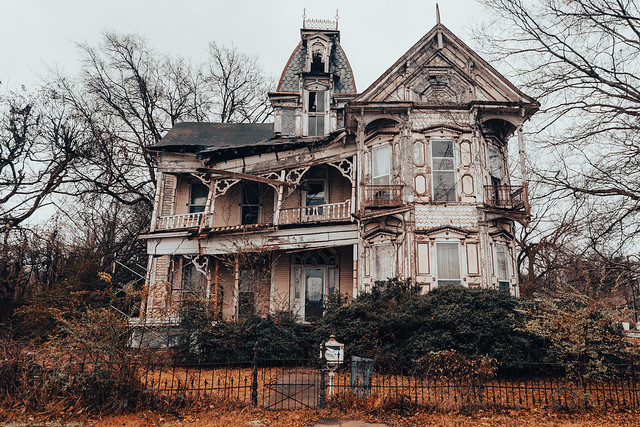 It's hard to tell if the place is actually abandoned, since it appears that someone may actually live there still. There are cars parked in the attached carport, and occasionally a dog will run out and bark at people from behind the iron fence. I would love to know for sure, and what the condition of the interior might be.

For a comparison, this is a picture of the house from 1905. Much has changed since then: 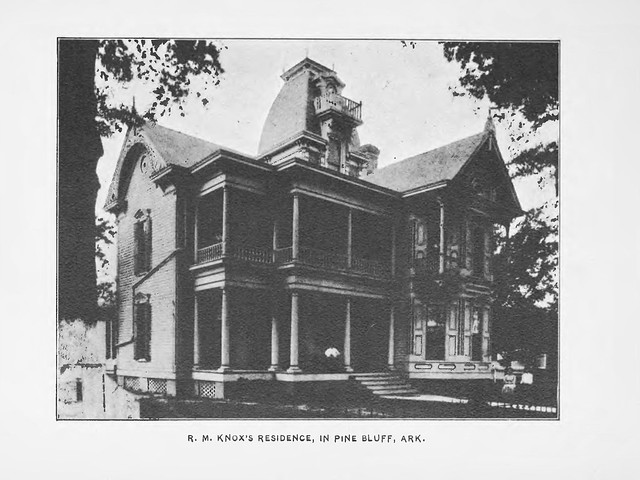 Posted by Cormackphotos at 10:24 PM No comments: