It rained all yesterday, and last night a drizzly fog descended over Little Rock. I was out running some errands, and decided to make a quick visit to downtown to see how it looked. The top of the skyline dissolved into the fog, and the low clouds picked up the orange glow of the street lights.

The first stop was the Junction Bridge. I walked past the disco dance music being played at the ice skating rink in the River Market and set the camera up along the river. 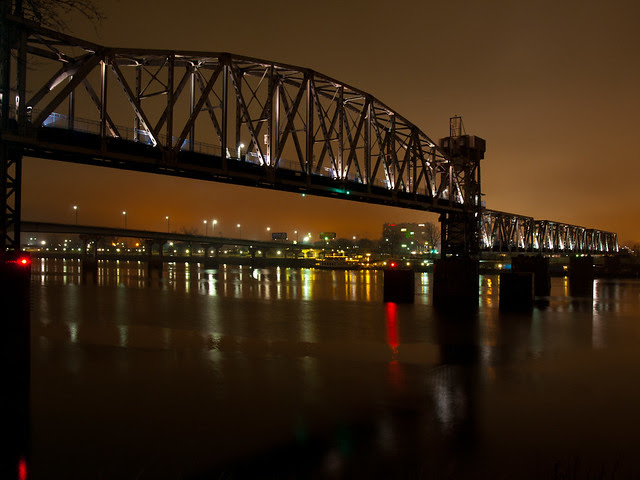 The fog or clouds had lifted, obscuring only the tops of the taller buildings. I drove around some, and eventually stopped at the base of the tallest building in the city - the Metropolitan National Bank Building. This was taken while standing next to the old YMCA Building. 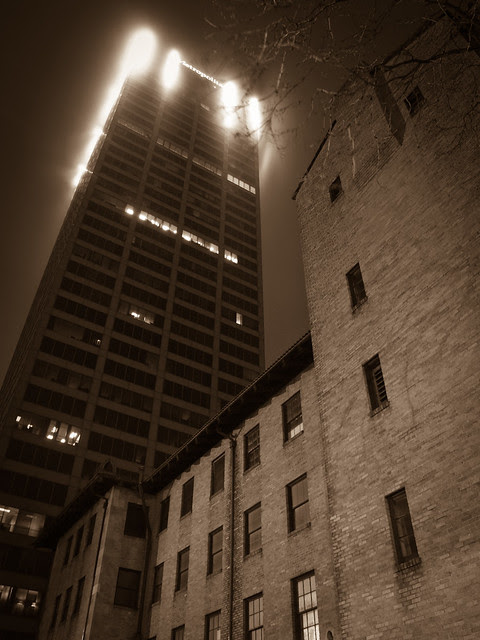 And finally, farewell Kodachrome...
Posted by Cormackphotos at 9:38 PM No comments:

So This Is Christmas

Well since Christmas is coming up, I guess I should finally get around to posting some more Christmas pictures...

Last weekend, I headed back to downtown Little Rock. I had noticed that the columns on the old Robinson Center were thrown in green and red colored light. It must have been for some sort of Christmas show being put on there, I think by the orchestra. The old building did look very festive: 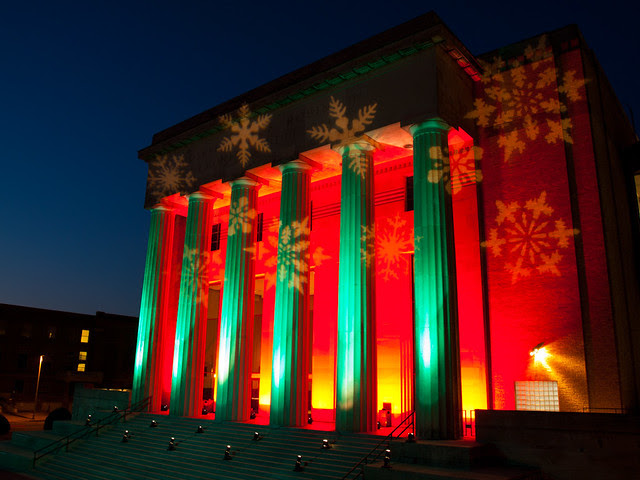 I think this was done just for last weekend, I drove by there a few nights later and there weren't any special lights on. 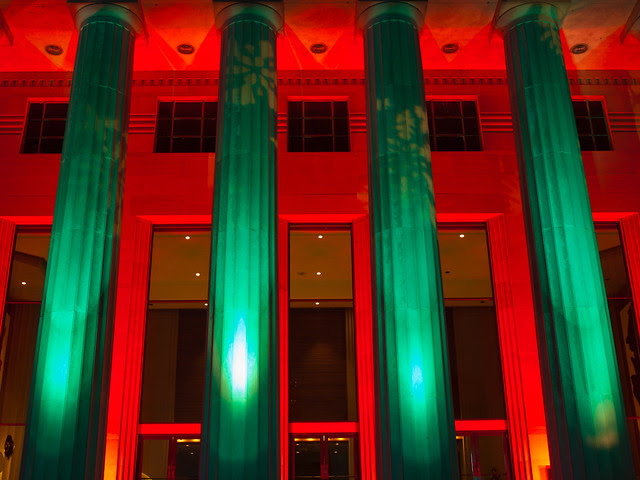 And a view from Robinson Center, looking towards the Pulaski County Courthouse and the Stephens Building: 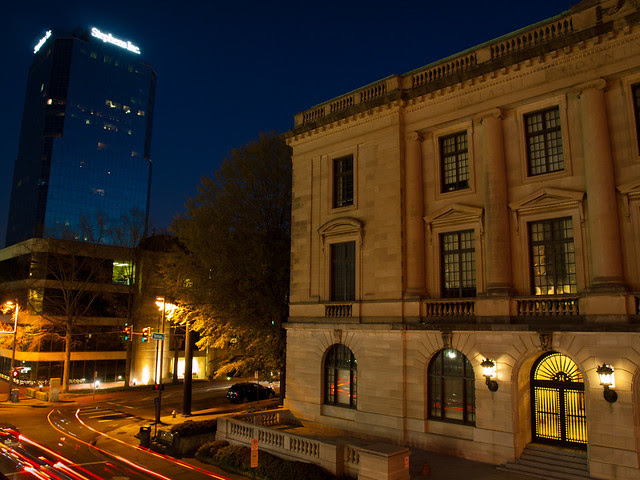 Hope everyone that reads this has a good Christmas!
Posted by Cormackphotos at 11:19 PM 1 comment:

I headed out in the cold and wind last Saturday night in order to get some pictures of Little Rock bedazzled in its holiday glory. My first stop was the Arkansas State Capitol, which has about 300,000 lights strung across the marble facade. I got there before dusk, and managed to catch a little bit of a sunset there. 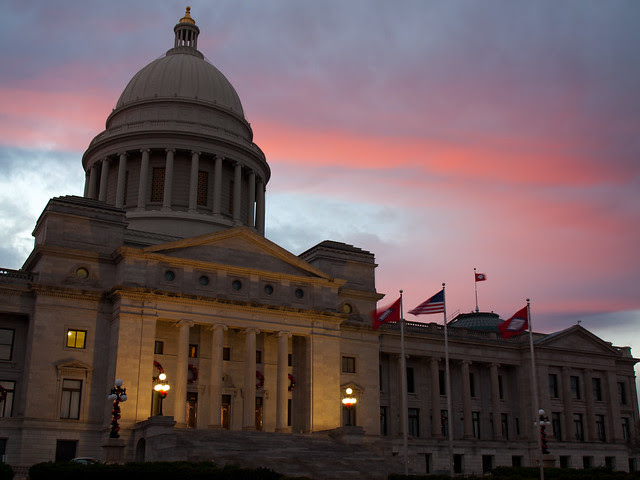 The title of this post is a bit of a misnomer. It was indeed cold and windy out there, but not all that silent (please forgive me for trying to make this post sound awkwardly Christmas-like). The heavy winds were flowing by the many flags on the capitol grounds, making them flap with a loud retort. The winds were from a front that was moving through, which brought with it much colder weather. The low tonight is predicted to be a chilly 18 degrees.

It wasn't that cold out at the capitol, and I managed to stand out there long enough to get pictures as dusk settled in. 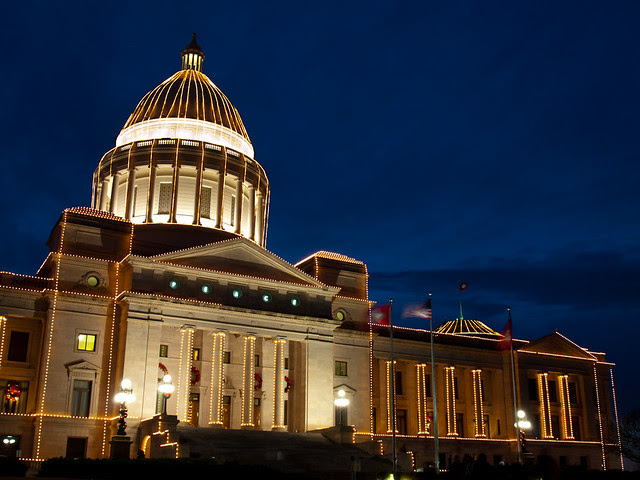 From the capitol, I headed over to another one of my favorite places to get pictures during the holidays. This was the top of a parking deck, which provides some decent views of downtown. I got to the top of the parking deck while there was still some color in the sky, and pointed the camera westward. 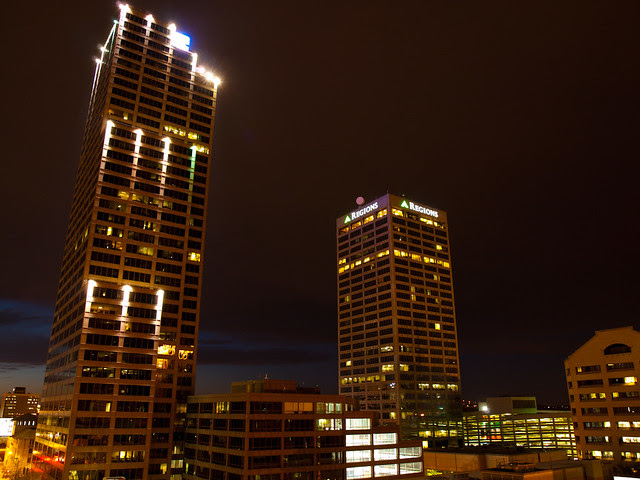 This particular parking deck offers a good view of the Bank Of America Building. Every year for as long back as I can remember, this building has put up a Christmas tree design along the facades of the building. 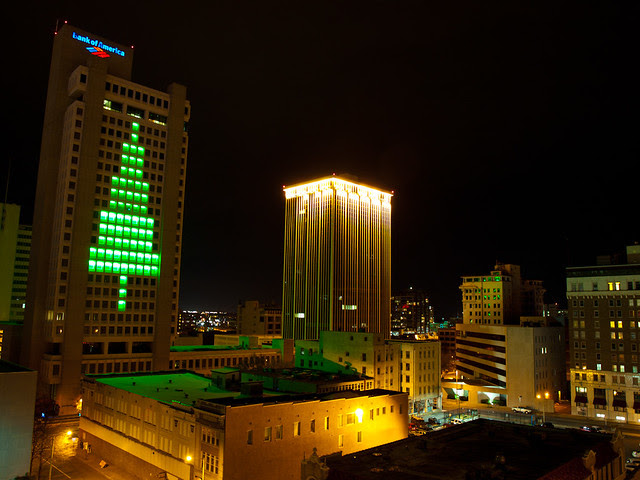 And another view of the building. I waited for awhile before there was some decent traffic heading down the road and into the shot. 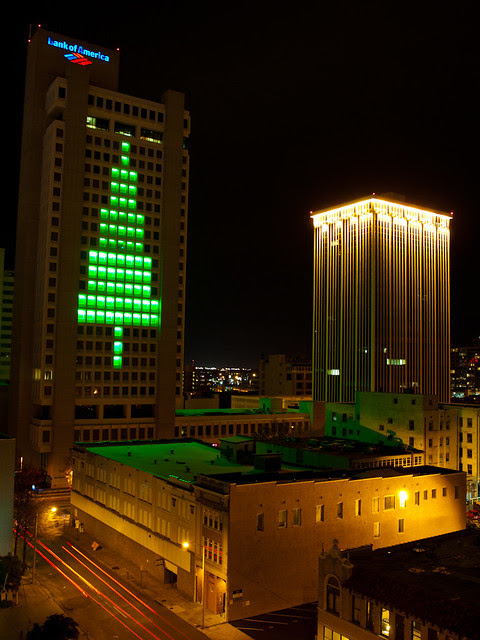 I don't remember being too cold while standing out on the top of the parking deck. Maybe by then the chill had just set in and I didn't feel it anymore. The wind was still blowing strong, enough that it made a streetlight that I was standing under wobble menacingly, like the wind was about to topple it.

Luckily I survived, and made it off the parking deck without being injured by falling streetlights or arrested for trespassing...
Posted by Cormackphotos at 9:45 PM No comments:

The capitol fireworks show is a great holiday tradition. After the Little Rock Christmas parade, there is a little ceremony and then the 300,000 lights that adorn the capitol are switched on for the first time. Just as the lights turn on, there is a small fireworks show. It all makes for a fun evening out, and also a good spot for getting some pictures.

The last few years, I had gotten pictures from the front or side of the capitol during the fireworks. But this year I wanted to try something a little different. A few months back I was driving around and ended up in the Capitol Mall - the collection of state buildings that are huddled together behind the capitol building. I thought that might make for a different vantage point for the fireworks.

So on Saturday night I met up with John again and we drove over behind the capitol. It was quiet and empty back there, the acres of parking for state employees were empty. The only signs of life were the fireworks people setting up. One of the firework guys walked by, and we asked if it was ok to take pictures back there. He said we were fine, but couldn't get much closer since we would end up in the blast zone. But the guy then said that because of the heavy winds, the show might not go on. And if it did, it might be a shortened version.

So we waited as dusk settled in. It was chilly, the wind provided a bit of a nip in the air. Eventually we got some company, when a Little Rock fire truck pulled up next to us. It was nice that they came out to make sure we didn't catch on fire.

The downside to being behind the capitol is that we had no clue what was going on at the front of the capitol. You couldn't hear anything of the ceremony, so unfortunately we missed out on some speeches and whatnot. Sadly, we also missed out on the free hot chocolate and cookies they always give out.

Then suddenly - boom! Fireworks started popping up, and I hurried over to the camera. The fireworks this year were taller than what I remember from the previous years, so I had to quickly adjust the camera to get everything in. 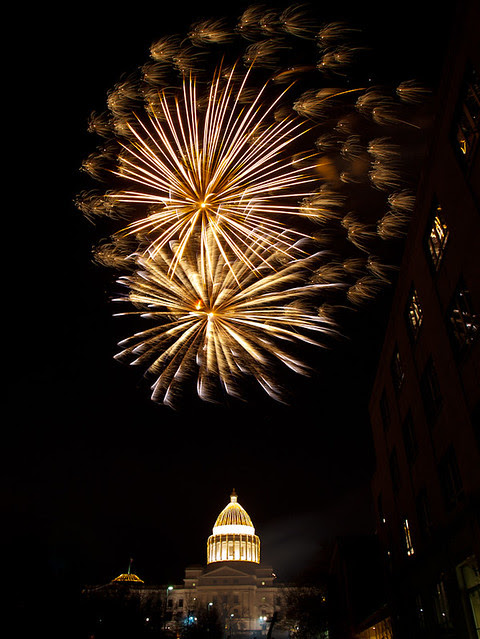 From this perspective, it was interesting to be able to see the fireworks actually being shot up. But it was loud. The bangs and pops of the explosions bounced off of the buildings surrounding us. It was loud enough that it made my ears ring. 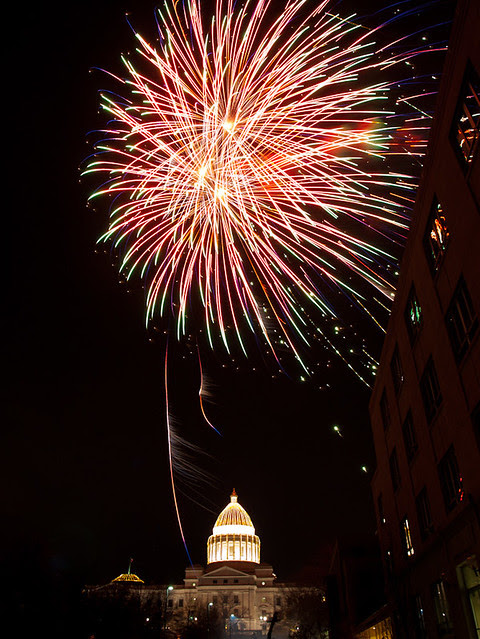 And the finale of the show: 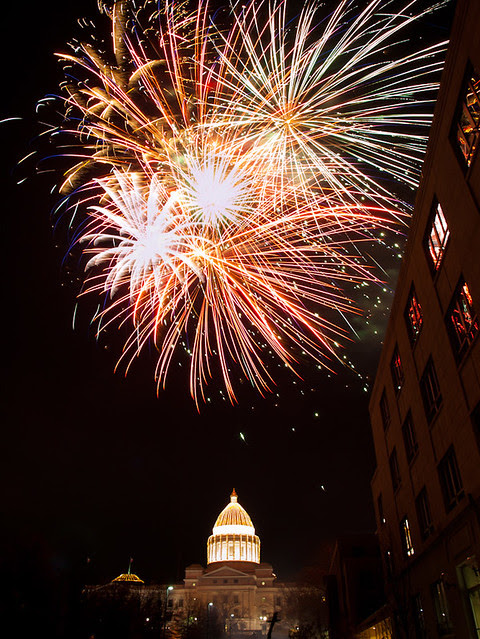 After the fireworks, you can go inside the capitol and have a look around at the decorations inside. We decided to head back to someplace warm, even if it meant not getting to see Santa.
Posted by Cormackphotos at 9:22 PM No comments: