A drive through the Ozarks

After enjoying the view from Mt. Magazine, we got back into the car and headed down the hill. Since it was too sunny to take pictures, and the fact that we had been awake since 5:00, it was decided that we should find a good spot to take a nap (priorities!). So we saw a sign for a Forest Service recreation area nearby, and headed off on a bumpy dirt road towards the park. After driving about 14 miles, I was brokenhearted to see that the recreation area was closed for the season. Undaunted, we continued on, searching for any nearby spot that would make a good shady place to park for a nap.

Along the way, we passed by this old abandoned church(?). I got out to take a few pictures, hoping that the tall grass I was walking through wasn't the home of any ticks or chiggers. 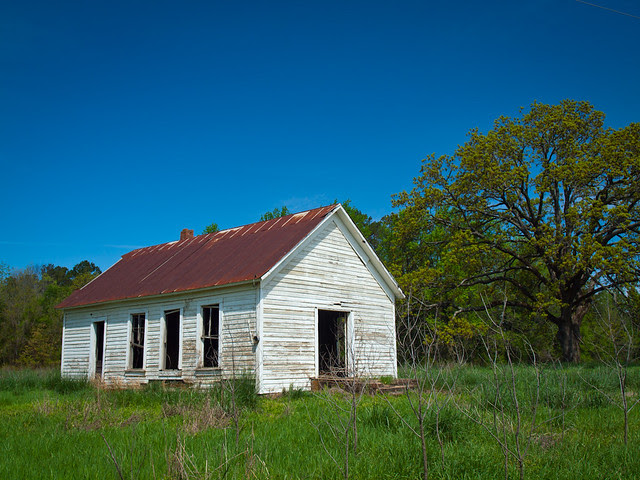 We soon found a possible nap location that was close by - a little park along a lake near the Arkansas River. So we hurried in, along with a bunch of people fishing. I managed to get about an hours worth of sleep, and then went to visit the park's bathroom. Which was probably the most disgusting bathroom I've ever been inside. It ranks up there with the bathroom in Trainspotting.

But with that done, we headed up to Clarksville to grab some lunch. Since I went to college in Clarksville, I knew of a perfect spot - the old Diamond Drive-in. Best burgers in town! After filling up on burgers, we got back into the car and headed to the northwest, driving up into the Ozark Mountains. We soon turned onto a road that ran parallell to the Mulberry River. I'd never driven this road before, and soon wished I had found it sooner. It is perhaps one of the prettiest in the state. The road provides views of the Mulberry (which had a few people floating by on canoes), and past several neat old buildings. This is an old church, sitting near the road, that was guarded by an old cemetery. The Mulberry River actually ran behind the church a short distance away... 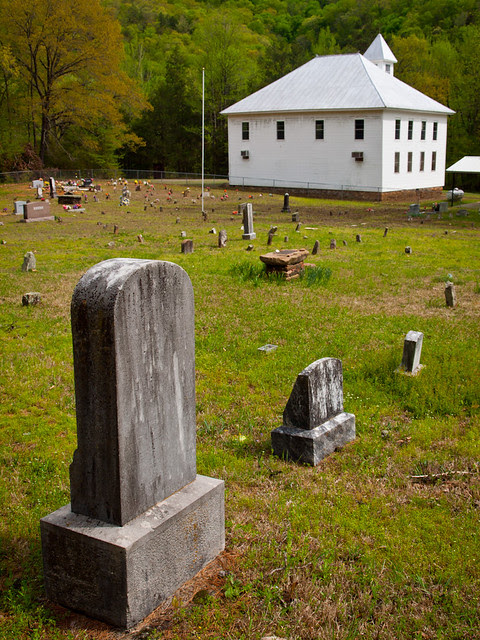 And of course, this being the Ozarks, there was one of these there: 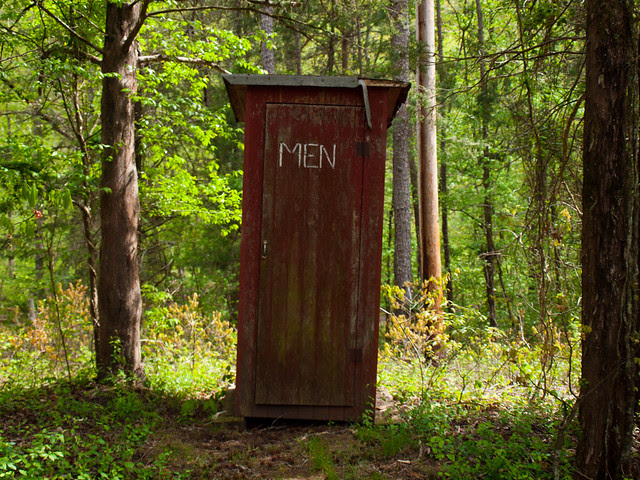 Further down the road was an access point to the Mulberry, so we stopped and took a few pictures. 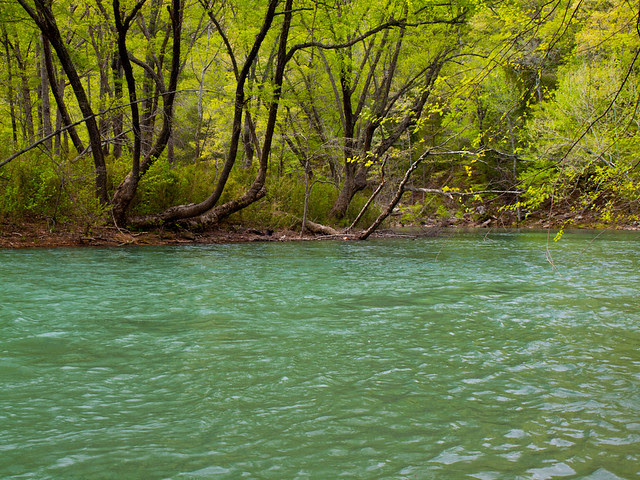 We eventually met up with Hwy. 23, and then headed south towards the small community of Cass, Arkansas. Cass, which I assume was named for Mama Cass, has a few neat old buildings. One of these, which may be an old school, was located just off of the main road. 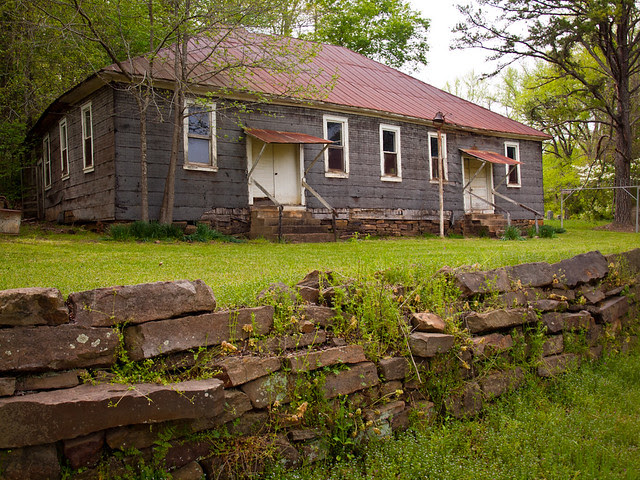 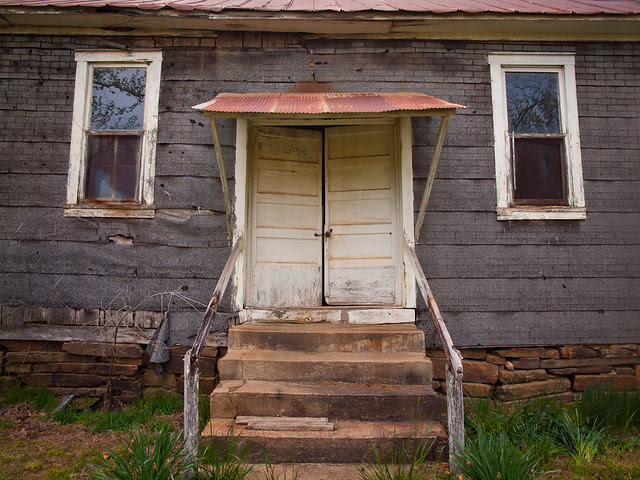 We followed a dirt road, which traveled up a steep hill. After a few miles of driving, we stopped at our next destination, Phipps Branch Falls. After sliding down the hill towards the falls, we finally made it to the bottom of this 23 foot-tall waterfall. Luckily, some clouds had passed by and it was shady enough for a few photos. 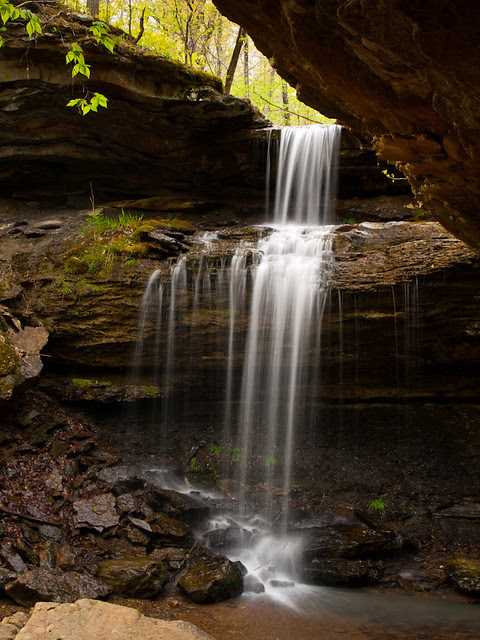 It's a nice waterfall, although it could have used a bit more water in it... 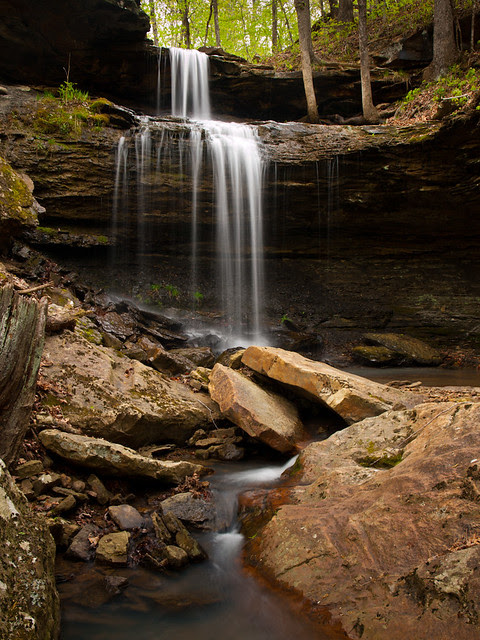 After that, we turned around and headed back towards Cass. Along the way, we drove by Fane Creek, which had some nice little waterfalls and cascades: 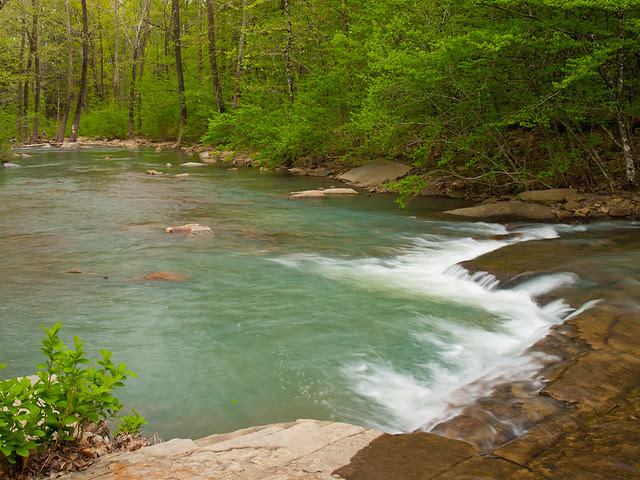 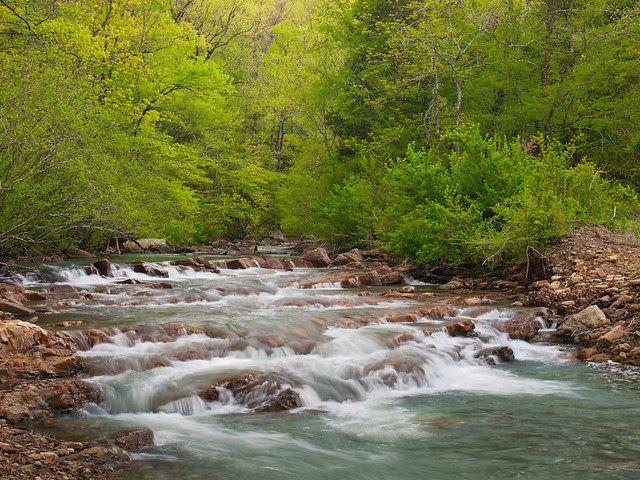 After that we decided to head on home, after a long day of driving and trying to battle the sun and clouds for good photography weather...
Posted by Cormackphotos at 8:12 PM No comments:

Last weekend, I headed out west with a friend (whose name shall rename anonymous since he/she may or may not have been playing hooky from work the day before) to try and visit a few waterfalls. There had been some decent rain the week before, so we hoped the falls would be running well. The only downside was that the forecast was to be sunny for most of the weekend, which isn't optimum conditions for waterfall photography.

So we headed out Friday evening, eventually ending up at the Cove Lake campground by Mount Magazine. We camped overnight, and woke up to a brisk 40 degree temperature before dawn on Saturday. After getting the campsite packed up, we headed off in the darkness towards a nearby waterfall. And after a few miles of driving down some dirt roads, I parked the car next to a jeep road that headed off into the woods. The hike to the falls was short, but it did involve a steep slide/scramble down the hill towards the creek. But we eventually made it to Wildman Twin Falls, two 43 foot-tall waterfalls... 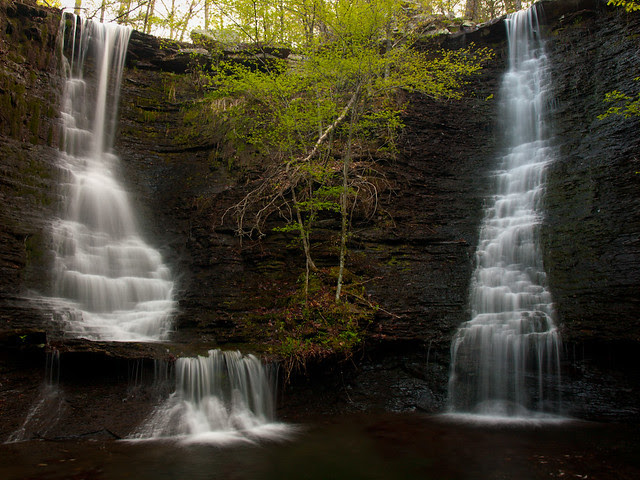 Both falls seemed to have a lot of personality, as they dropped over different steps along their way to the creek below. 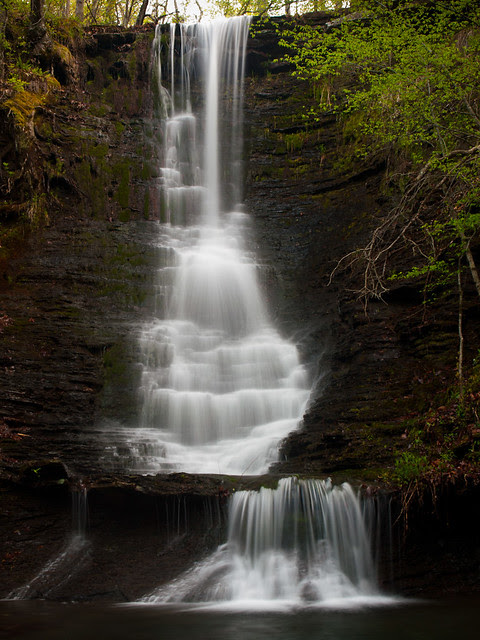 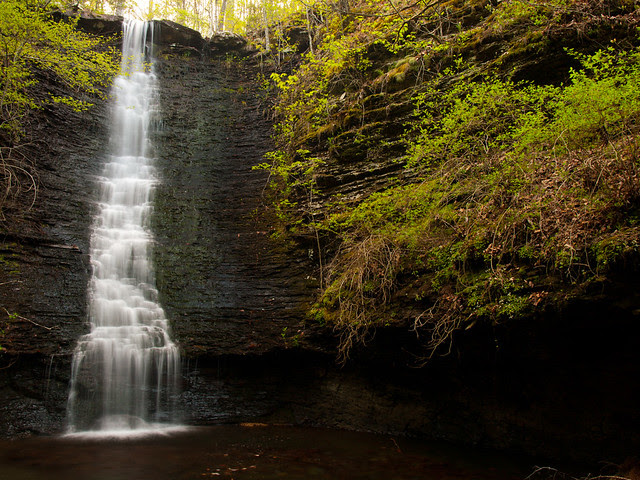 Another wide shot with both falls, which I made into black and white to try to look a bit different... 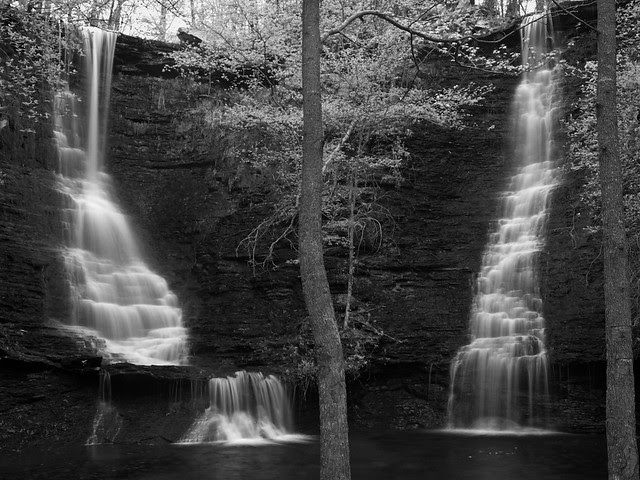 And the view looking back at the falls, from the creek... 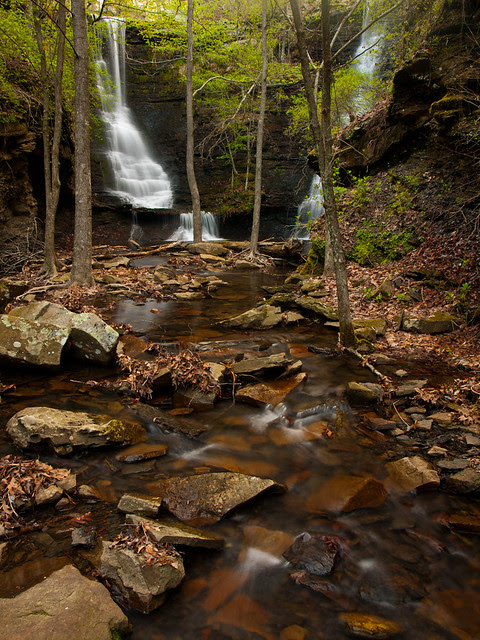 There were several small waterfalls and cascades along the creek below the falls. We hiked along the creek hoping there would be a less steep place to hike back up the hill, but we never found one. 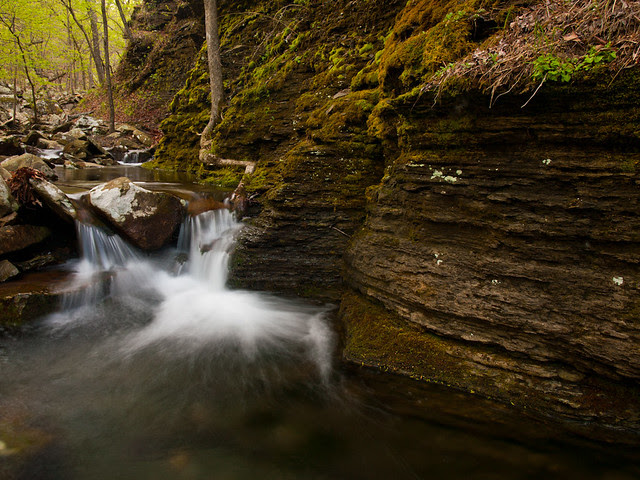 After that, the sun came out and officially nixed any waterfall photography. So we climbed up the hill, and eventually made it back to the car. It was a brilliantly sunny day, so we headed back over to Mount Magazine. At 2,753 feet tall, Mount Magazine is the tallest point in the state. Which compared to the Rockies, doesn't seem all that tall. But it was still a high enough elevation that the trees on the top of Magazine had yet to start getting leaves, unlike the millions of trees below at the base of the mountain. 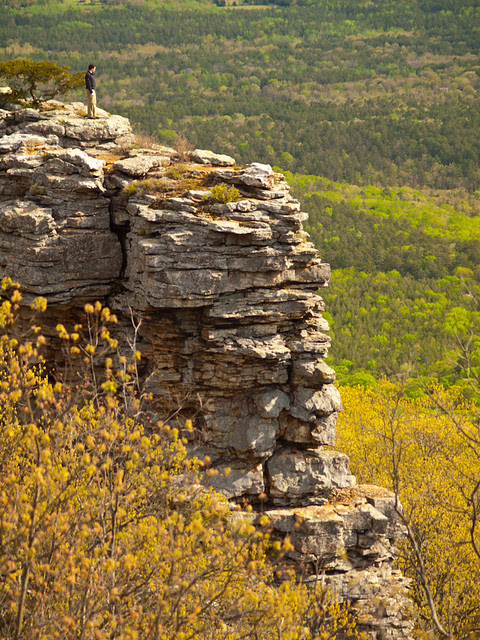 And one last shot, from an overlook on Mount Magazine. This is looking south... 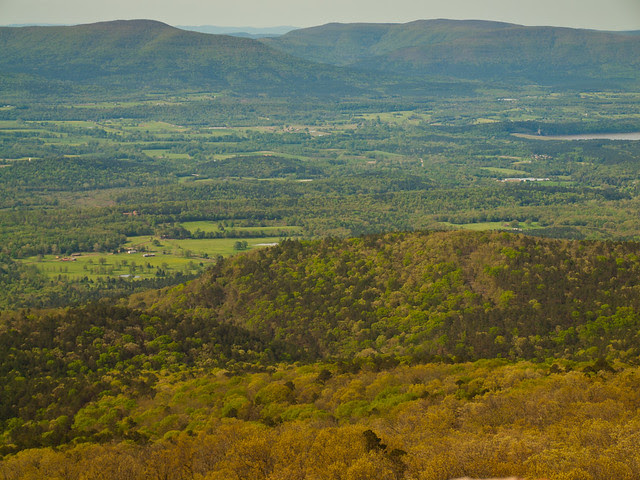 If you consider the thick cake of pollen that has blanketed my car this week, you could easily tell that Spring has finally hit Arkansas. This is one of the best times of the year (other than autumn), when the trees begin to get leaves and the landscape turns to green again. The only downside is the pollen that turns everything green, but luckily we had a nice rainstorm pass through today that washed it all away (at least it made my car look somewhat clean).

But last weekend I wanted to get a few pictures of the newly blossoming Spring. So on Saturday, while with my girlfriend, we visited a spot near Searcy. This is a view of the Little Red River, which isn't actually all that little, or red. 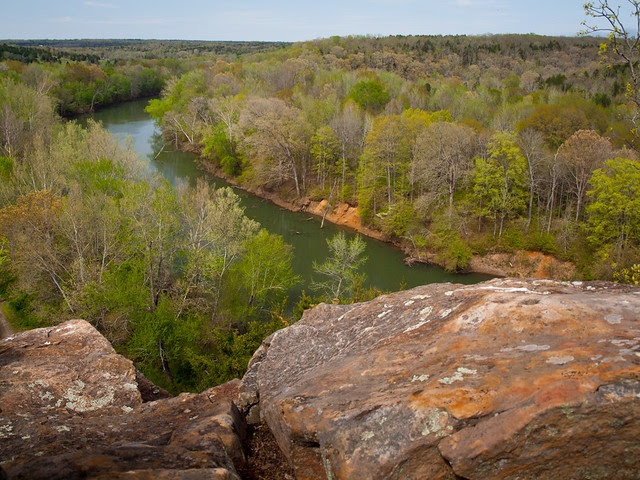 This overlook is B Rock, and it provided a nice overlook to the trees that were changing over into their Spring colors... 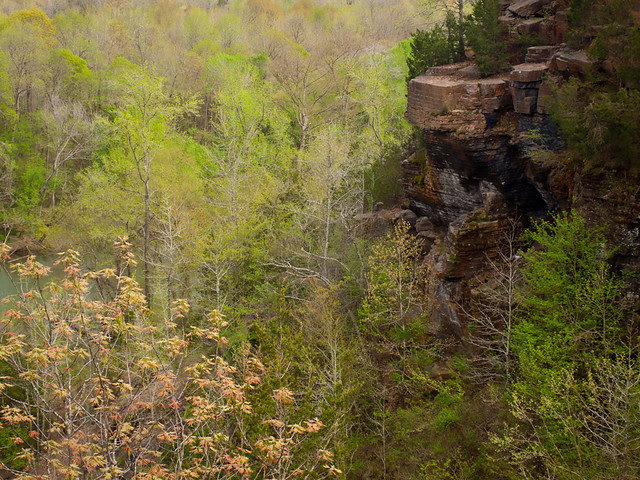 And on Sunday, I headed over to North Little Rock and visited the Old Mill. And since it was a warm Spring weekend afternoon, it can safely be assumed that the place was packed with people. I counted five people getting portraits taken while I was there, and countless others crowding the mill and surrounding grounds. But miraculously, I managed to get a shot of the mill without anyone else in it. And with a nice flowering dogwood tree in the foreground... 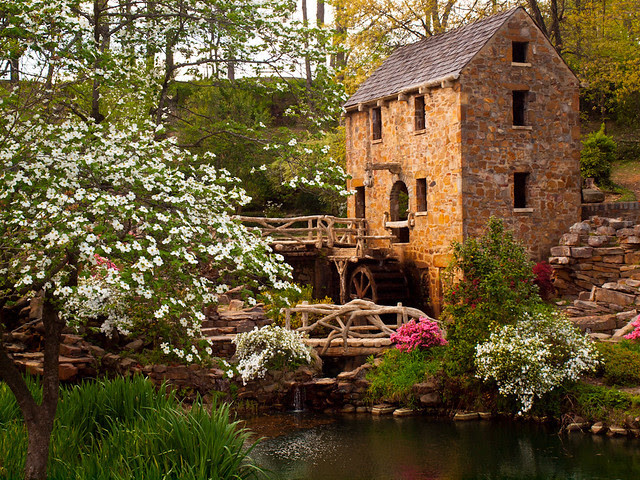 And then on Monday, after work, we headed out to visit Flatside Pinnacle. This is a great spot, which is just a short hour drive away from Little Rock. But the views from there are awesome, overlooking the thick forests of the Flatside Wilderness, in the Ouachita National Forest. After the drive out from the city, I realized that I had mistakenly left my polarizing filter at home. Oh well. The views made up for my lack of planning in the filter department. 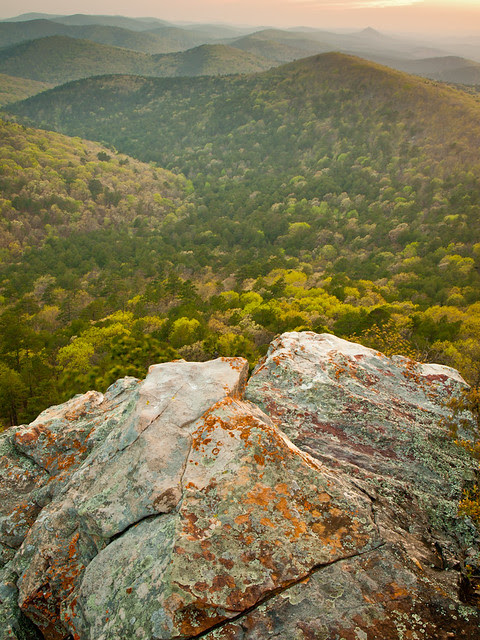 The view from Flatside, as the sun began to set... 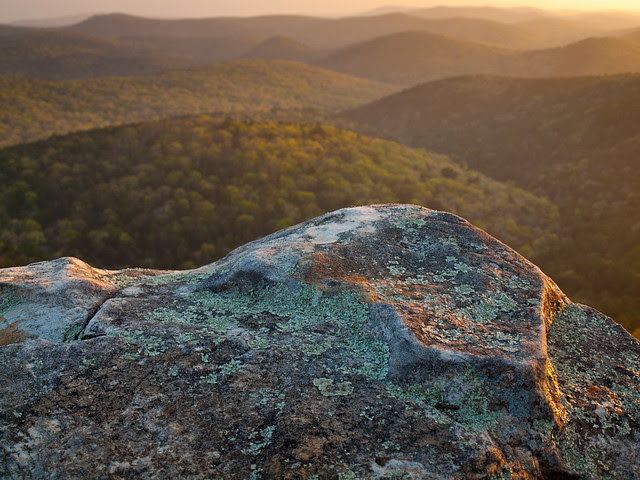 The sunset was great, shining over the rolling hills of the Ouachita Mountains... 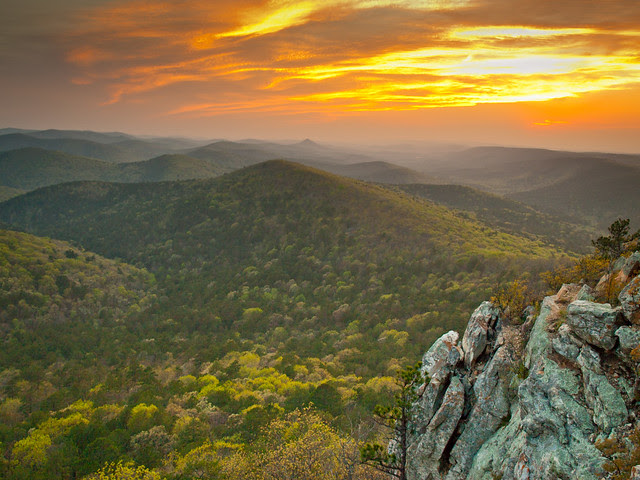 I had some free time last week, so I drove to downtown Little Rock to try to take a few pictures. I wandered around a bit before hitting Riverfront Park in North Little Rock, which has some good views of downtown Little Rock. It was right at dusk, so I hurried over to the river and got a few shots of the Clinton Park Bridge. The Clinton Park Bridge is an old rail bridge (originally called the Rock Island Bridge), that was converted into a pedestrian bridge a few years ago. The Clinton Presidential Library is the building just to the right... 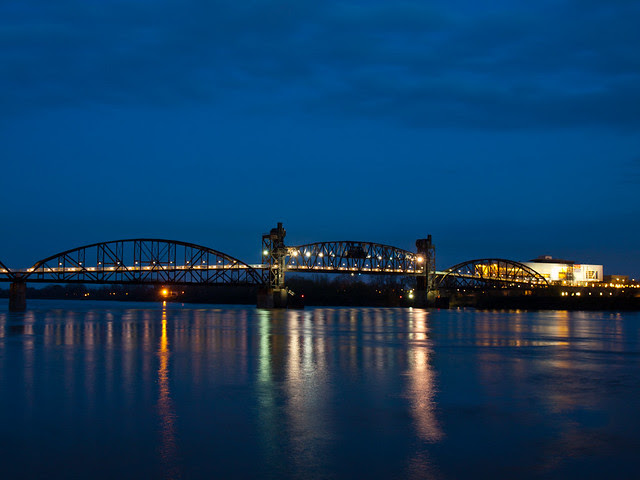 I walked under the I-30 bridge and took this shot of the Little Rock skyline, with an old towering tree in the foreground. I really like the old trees that grow along the riverfront, which have stood here for so long and have seen so much time pass by... 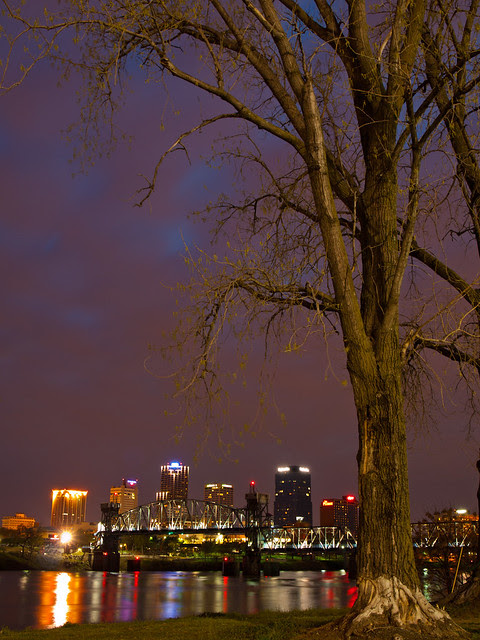 Posted by Cormackphotos at 12:35 AM No comments:

It was pouring down rain last Saturday morning, which definitely was enough to get some waterfalls flowing.  And luckily for me, I was set to drive off on Saturday to western Arkansas, in order to visit the family for Easter.  I had time to hit up a few waterfalls along the way, and planned a course that would take me by Mount Magazine, which is not only the tallest spot in Arkansas but is home to a few waterfalls as well.

So I headed out of town, driving west on Highway 10.  While it would make for a slower drive, it's much more scenic than the freeway.  I drove out by Pinnacle Mountain and Lake Maumelle, as a steady rain fell.  But as I drove further west, the rain slacked off.  And eventually, the clouds began to break up.  So of course, luck would have it that by the time I reached Mt. Magazine, the sun was starting to come out.

Sunny weather is, of course, the one thing you don't want for waterfall pictures.  So I was dismayed to see the clouds disappearing as I started up the curvy road up to Mt. Magazine.  Luckily there are a few waterfalls that are easy to reach along the road, in fact you can see them from the car.  Two creeks tumble down the mountain, cross under the road, and then meet up in a series of waterfalls down hill.


I slid down the hill and tried to get a few pictures while there was still some fleeting cloud cover. The creeks created several nice waterfalls, which were filled with water after the recent rains. 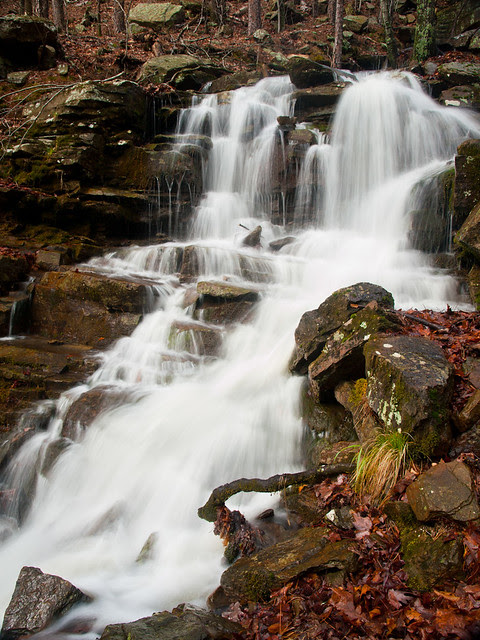 While road culverts aren't usually something you'd try to include in a landscape photo, the culverts under the road were interesting. The road to the top of Mount Magazine was carved out of the woods in the 1930s by the Civilian Conservation Corps. They created some great old stone culverts, which perfectly match the environment around them. This small waterfall poured out below a stone culvert that, according to the marker, was built in 1936. The work on the rock culverts is amazing, especially since you can't even see it from the road. 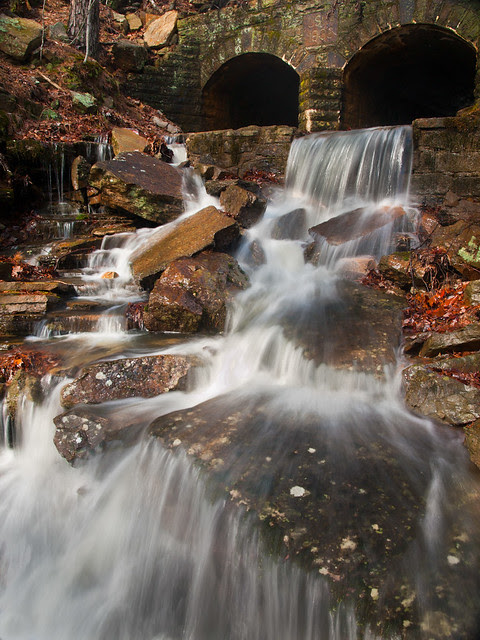 The clouds had finally drifted away, so it was way too sunny for any pictures. I abandoned my quest for photos and just drove on to see the family. It was supposed to rain on Sunday as well, which I hoped would mean more time for picture taking. But the storm clouds drifted away early in the morning, so again there wasn't good light for taking pictures. Oh well.

But on the way home I did stop to take pictures in the small town of Paris, Arkansas. This was on the window of a restaurant in town, which looked like it had recently closed down. Why did it close? I assume it's because this was the epicenter of the bird flu epidemic... 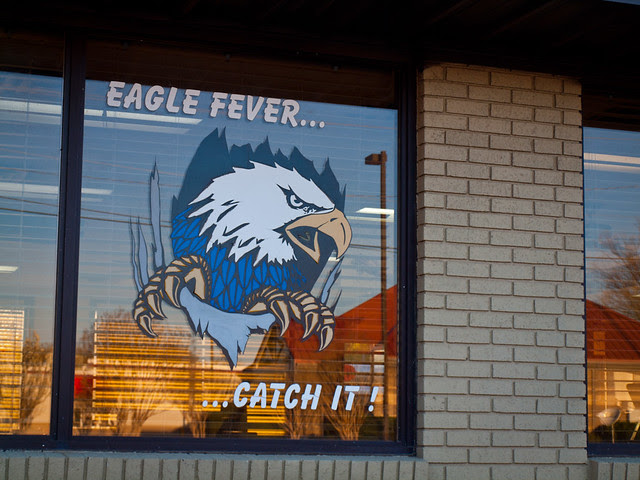 Posted by Cormackphotos at 9:30 PM No comments: