The Riverfest celebration in downtown Little Rock used to always end with a big fireworks show over the Arkansas River, but since the festival got new owners, there have been a few changes. One change was that the fireworks were moved to Friday night, at the beginning of the festival. I didn't know about the change until about 25 minutes before the fireworks show was scheduled to go off, but I had just enough time to grab the camera and hurry onto the freeway towards downtown.

I got to a spot along I-630, which provides a good (if distant) view of the fireworks through some of the downtown skyscrapers. The camera battery was nearly dead when I got there, but I managed to at least a few decent pics of the show before the battery died and I was attacked by mosquitoes. 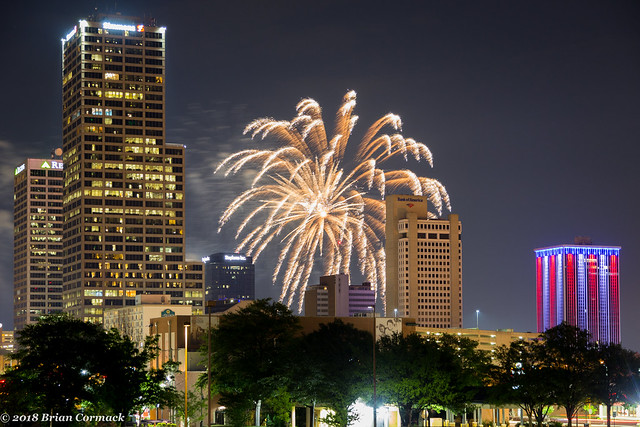 Posted by Cormackphotos at 11:27 PM No comments:

The area around Scott and Keo, located about 30 flat and swampy miles from Little Rock, is perhaps the Boxley Valley of the Delta. There is an amazing assortment of old homes, barns, churches and other buildings sitting out next to rice and soybean fields. There are some great spots to take pictures, and I headed out there last week when I had a free night.

The small town of Keo (population 235) is surrounded by fields of tall pecan trees. This field, located right in the town, was lined with a barb-wire fence that was covered with bright purple flowers. 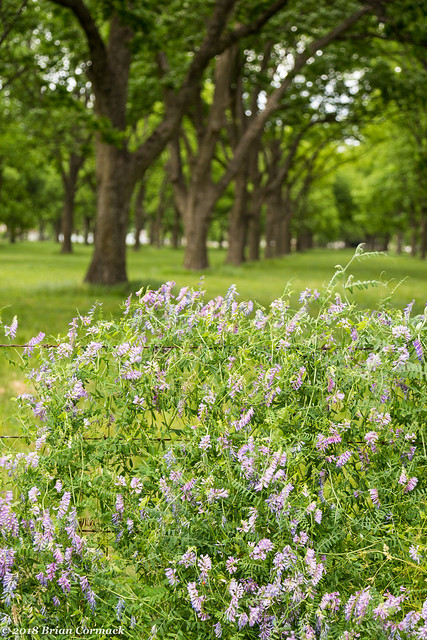 Just south of Keo were some small silos, with some storm clouds behind it. There were some other storms growing off to the west, and the sky would steadily grow darker and more ominous the longer I was out there taking pictures. 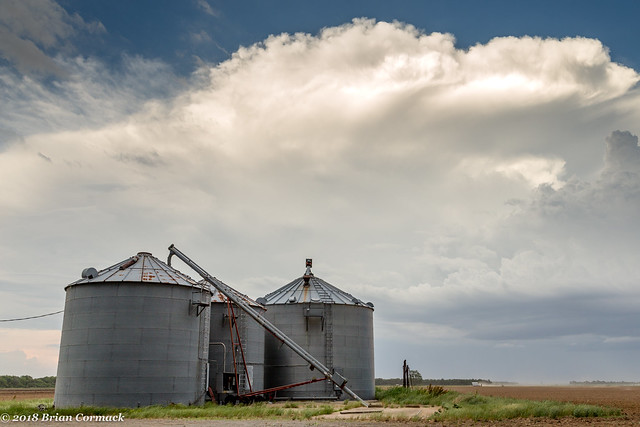 Just down the road is this old church, called Morris Chapel. Unfortunately I wasn't able to find any information on its history, but it doesn't look like it's been used in quite some time (the grass in front of it is mowed at least). 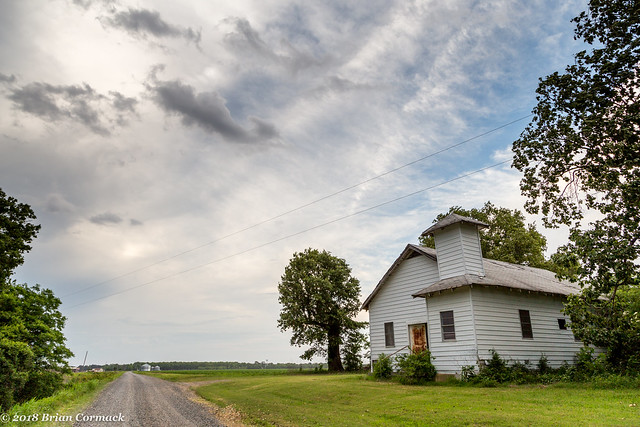 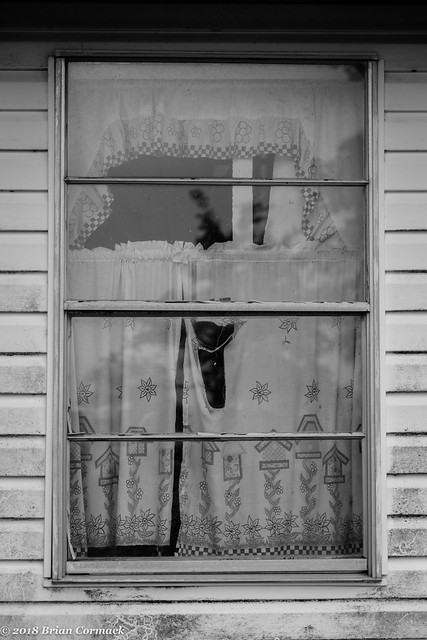 There is a cemetery across the street, with several markers dating back to the 1800s. 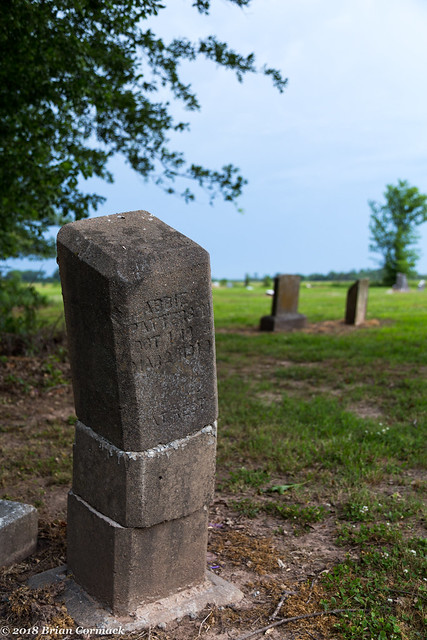 I got back in the car and followed the car south as it began to run along the side of an oxbow lake that was filled with cypress and tupelo trees. There were so many trees that they formed a thick wall in the swampy lake water. I tried to find a good spot to stop and take pictures, and eventually found a road that actually bisected the lake. 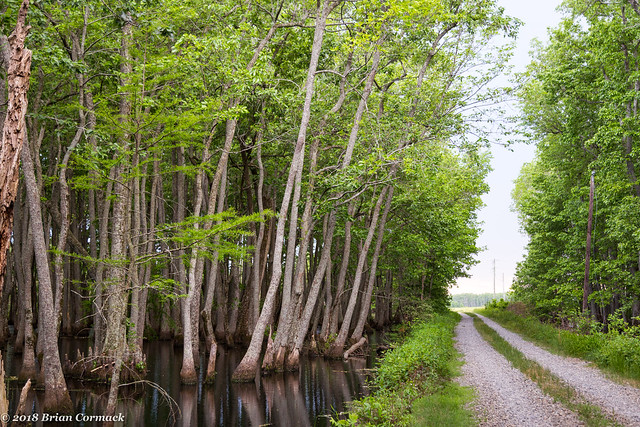 It was a neat spot, and one that was ideal for pictures. The road was slightly elevated above the lake, meaning that there was at least a little bit of distance from the snakes in the water (at least I hoped that was the case). It also provided some great views of the lake, which was green with duckweed (at least I think that's what it's called?). 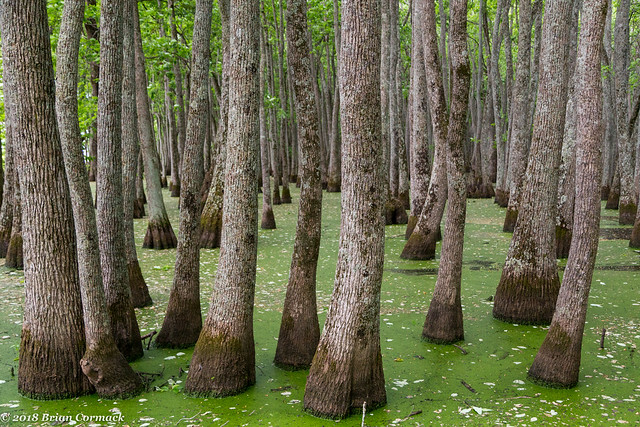 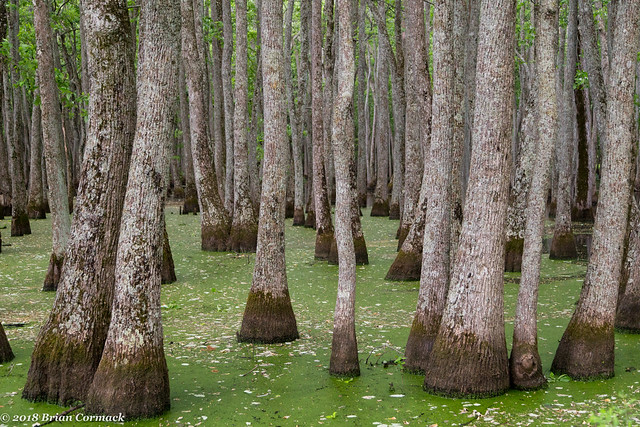 One thing that was shocking was that there weren't any mosquitoes out there yet. Probably in a few weeks (or days) they will be out and it will be impossible to be out there for very long. 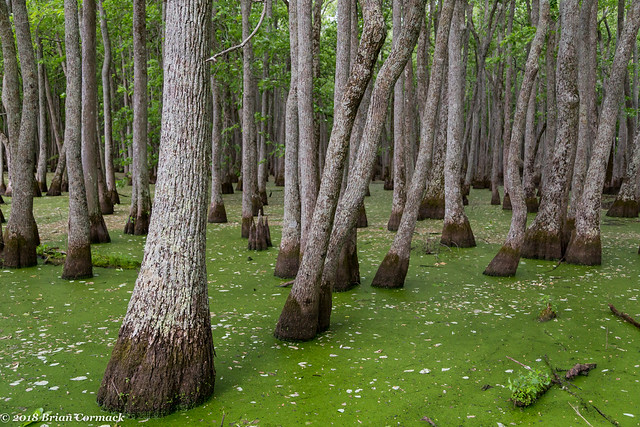 It was getting close to sunset, and the sky began to take on a bright orange tint. The storm clouds were still gathering near, but there was just enough of a break for the sun to burst through. I hurried down the road, which emptied into a wide field. 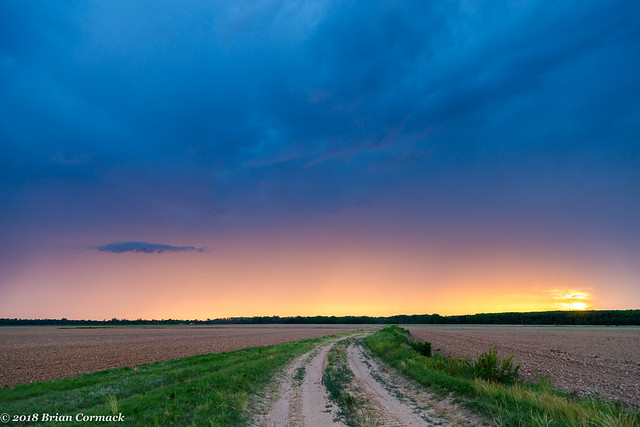 Parked next to the field was this old tractor, which was still being used. Wonder how old it is? 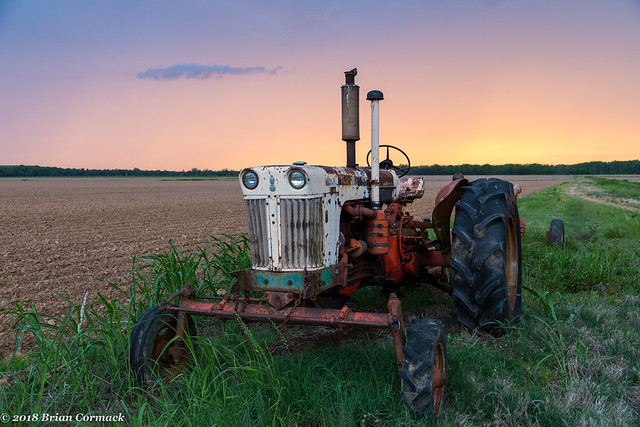 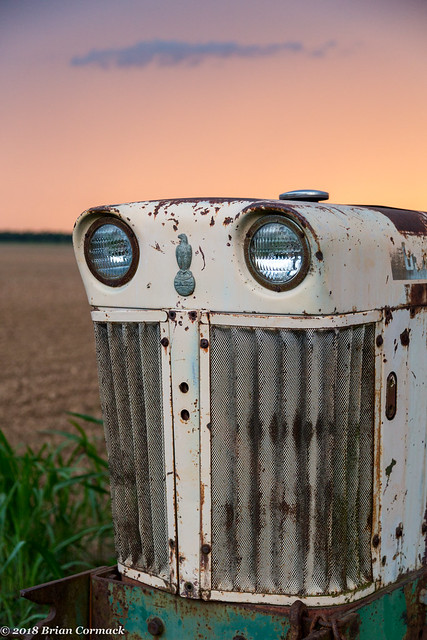 I headed back to the car, thinking I had time before it got dark to make it to another spot I had planned on checking out on the trip. But I never made it, the light was just too great and I had to make lots of stops. Not only were the blue storm clouds getting darker, but the orange from the sunset was getting more intense. I stopped in the middle of the road to get a few shots (luckily not much traffic out there). 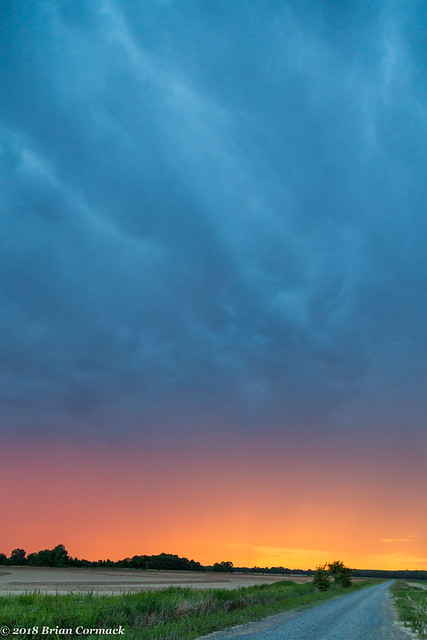 The slow-moving storm was finally here and was dropping some lightning. It was almost dark, so I hurried to find a good spot to try to get some pictures of the lightning. I ended up parking next to a field, and then set the camera up on the tripod (a metal tripod, which perhaps isn't the wisest thing to do in a lightning storm). 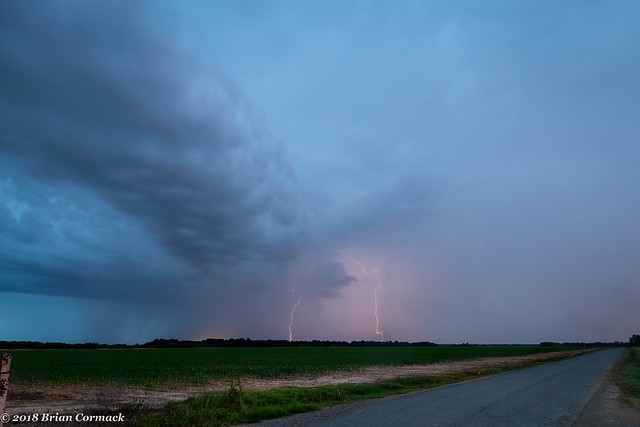 I stopped when it started to pour down rain (and also when a huge bug flew right into my face), and started to pack up the camera and tripod. Of course, right as soon as I got in the car the storm dropped a huge and very photogenic bolt of lightning right smack dab in the middle of where I had been pointing the camera. Oh well, it was time to head home anyways.
Posted by Cormackphotos at 10:27 PM 1 comment:

Out of Office - Travel Photography

Here is another little photography portfolio slideshow, this one focuses (pun intended) on pictures taken while traveling outside of my home state. The photos were taken on trips to Mexico, Tennessee, North Carolina, Missouri, Texas, Florida, Louisiana, Mississippi, Oklahoma, New Mexico, Arizona, Utah, California, Oregon, Massachusetts, New York, Illinois and Washington, D.C. The pictures were taken between 2007 and 2018, with either a Canon 6D, an Olympus E30 or an Olympus E500.

Not to sound too old, but I've been taking pictures now for over twenty years. I got interested in photography way back in the olden days of 1994, back when I was in junior high. I got my first real camera in 1995, a Pentax P30T from the Service Merchandise in North Little Rock. The camera was a film camera with manual focus, back when the idea that in the future everyone would carry around fancy digital cameras on phones would have sounded crazy.

I've been looking through a bunch of old pictures recently while making sure that I have all my files properly backed up. So I took a bunch of my favorite shots of Arkansas that I've taken over the years and compiled them into a portfolio slideshow. I'm going to admit to being a little self-indulgant here, since the slideshow is about 15 minutes long. But it encompasses photos taken between 2006 and 2018, from just about every corner of the state. The photos are organized by season, so it features a little bit of everything from winter snow to fall colors.

This only has shots from Arkansas, but I've been working on another slideshow that has pictures taken from my travels outside of the state. That'll be up soon!
Posted by Cormackphotos at 11:07 PM No comments: