Before going to a friend's house to watch the big football game last Saturday (FC Dallas vs. Kansas City), I drove around looking for something to take pictures of. I ended up passing through the Lakewood neighborhood of North Little Rock, and hoped to see some ducks out on one of the lakes.

There were a few out, so I pulled into a little parking area where a group of ducks were congregated around a truck. There was a guy in the truck, who was reading a book and trying to ignore the chorus of duck quacks just below his window. The ducks were hungry, apparently, and were bothering him for something to eat. When he didn't respond quickly enough to their repeated quacks, one of them took to pecking the side of the truck with its beak, like a battering ram.

That got his attention and he grabbed a few handfuls of chips and tossed them to the ducks. He looked up at me and jovially said, "they don't like the nacho flavored chips!" Indeed, apparently they do love Kroger brand kettle chips. I got out to take a few pictures of the duck feeding frenzy. One of the ducks, the one who pecked the side of that guy's truck, took off towards me. But I didn't have any chips, and the duck got annoyed and gave an angry quack... 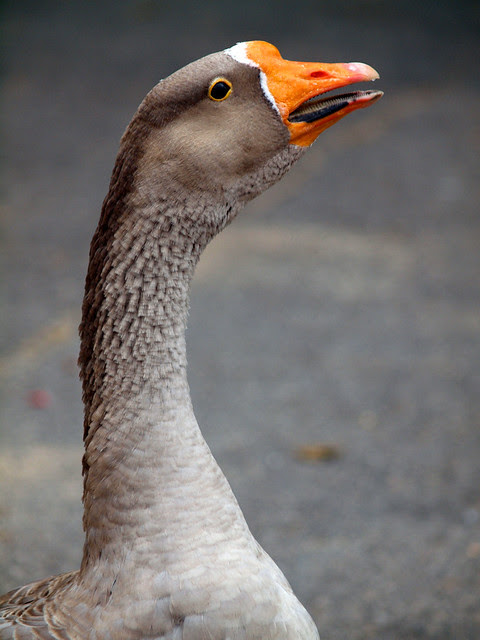 I got a few pictures in before the duck decided to charge towards me, and I retreated. I didn't want any dents in the side of the Vibe from an angry and hungry duck.
Posted by Cormackphotos at 10:23 PM No comments:

Summer is winding down and fading to a hot and muggy close. It is still way too hot outside, but last Saturday I decided to brave the high temperatures and take a quick trip out into the woods.

I decided to pay another visit to the Dagmar Wildlife Management Area, a swampy area about fifty miles east of Little Rock. There are several neat spots, with lots of cypress and tupelo trees sticking out of the swampy waters. This area, near the Cache and White Rivers, is also where the presumably extinct Ivory-Billed Woodpecker was supposedly spotted a few years ago. Although the search for the elusive bird has pretty much ended, there are still many signs out there that show the bird and how to identify it. When I last visited this area, in 2007, I thought that I had possibly gotten a picture of the Ivory-Billed woodpecker, but was never sure. See if you can spot it in this picture.... 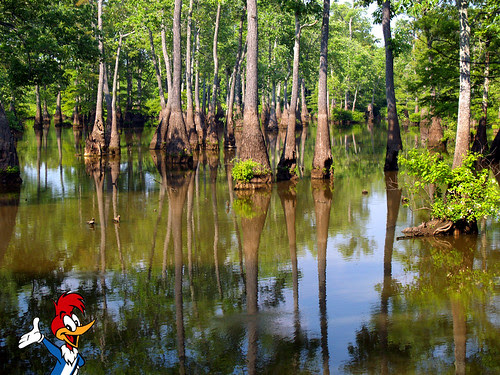 The shot above was taken at Apple Lake (which I guess if it has "Apple" in it, it should be called the iLake). This is a neat little lake, the water is filled with cypress and tupelo trees. It's just a short walk around the edge of the lake, with views of the trees and maybe some local wildlife.

I knew there was no chance that I would actually see an Ivory-Billed woodpecker out there. I was more interested in making sure that I didn't have a run-in with any snakes. This lake would also be a great home for some alligators, and part of me wanted to get to see one in the wild. Of course, as long as the gator was pretty far away (but close enough for good pictures). And if the gator had first sent me a signed and notarized letter in which it promised not to eat me.

I was walking along the lake when I heard a large splash in the water, and saw a line of bubbles drift up in the water. Apparently I had just disturbed and annoyed some animal. I stared carefully at the water, and could just about make out some sort of animal moving about in the murky fathoms of Apple Lake. Was that an alligator tail? It was probably more like the light playing on the water, combined with an over-active imagination. But after that, I didn't dare get close to the water.

But that would be about the extent of my wildlife sightings out there. The most exotic creature I ended up seeing at Apple Lake was a dragonfly. And the light was really harsh and all the pictures sucked. So I headed back to the air conditioned comforts of the car.

My next stop was the Robe Bayou Canoe Trail and Scenic Drive, located just down the road from Apple Lake. This is a short, but really neat drive that runs alongside Robe Bayou and then ends at a very nice lake. There are tons of scenic trees along the dusty gravel road. 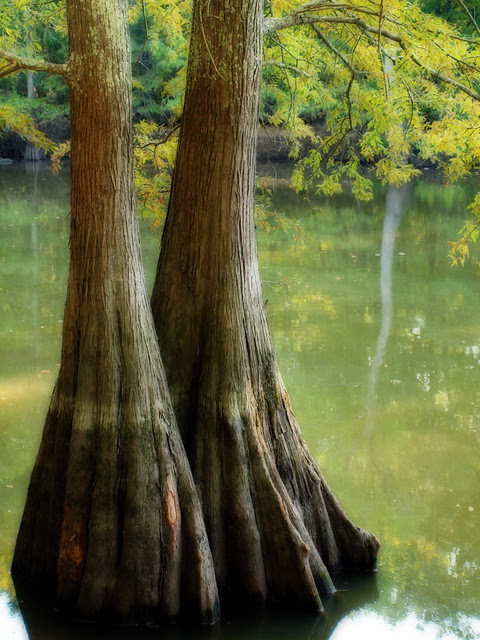 The scenic drive ends at Hickson Lake, which is lined on both banks with tall trees. The lake is also perfectly situated so that the light from the late evening sun casts an amazing golden glow on the distant trees on the opposite bank. 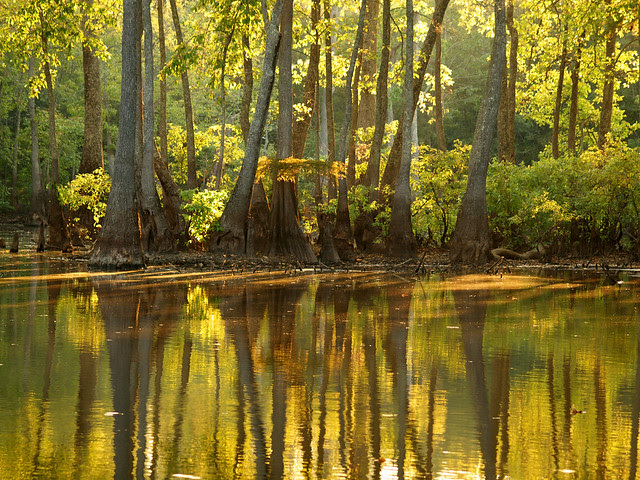 I explored more of the shoreline along the lake, which included a neat spot where there were tons of cypress knees, sticking up out of the ground like skyscrapers. I was amazed that I didn't see any snakes lurking in the dead leaves around those towering cypress knees.

I ended up heading back to one certain spot, which provides some easy access to several great views of the lake. The sun had sunk lower, and the rays were catching hold of a few trees nearby. I really loved how they looked against the distant trees reflected in the calm waters of the lake. 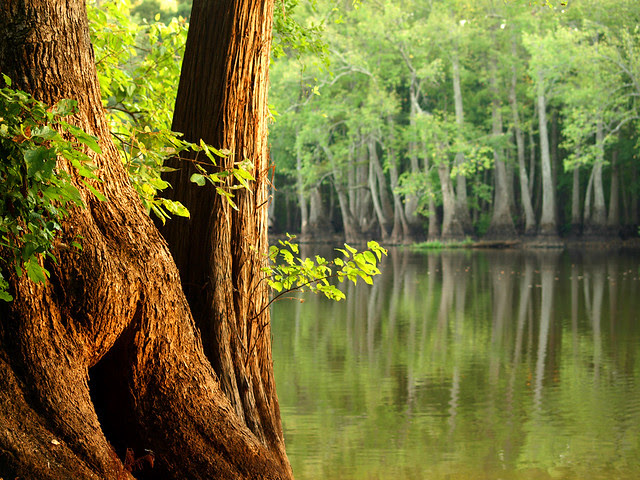 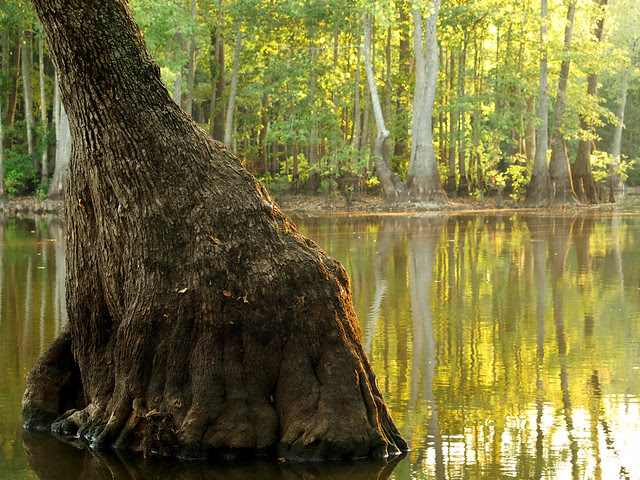 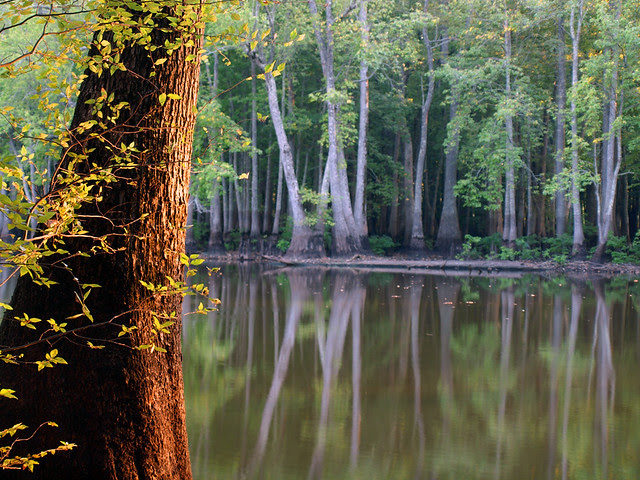 The light was fading as it was getting closer to dusk, but there was still a lot to see there... 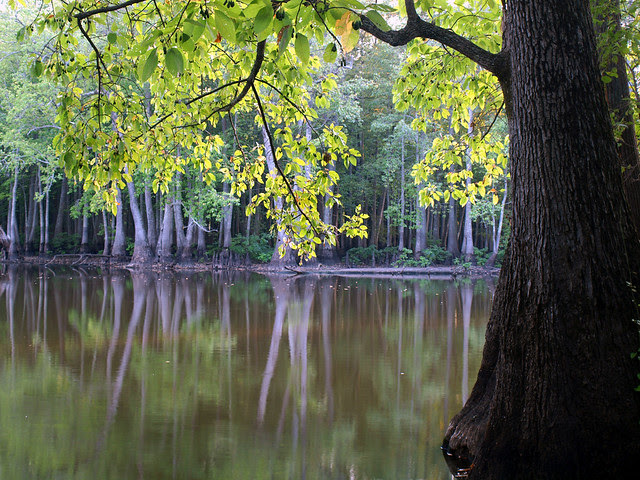 And one last shot, taken of the distant shoreline at dusk: 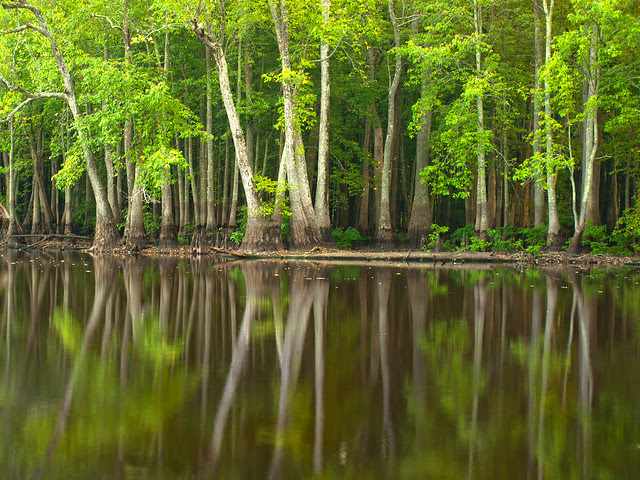 I can't wait to head back out there in a few weeks, when those trees have turned into their vibrant fall colors. Maybe I'll be lucky to catch the trees at their peak, with perhaps a touch of fog on the water. Or who knows, maybe there will be an Ivory-Billed woodpecker hanging out on one of the trees? I know I wouldn't be so lucky, but I'm looking forward to the return trip...
Posted by Cormackphotos at 10:30 PM No comments:

I'm very pleased to report that one of my photos was selected to tour the state next year, as part of the Small Works on Paper exhibition. SWOP is part of the Arkansas Arts Council, and will visit eleven cities across the state.

The picture chosen was taken in April, along Route 66 in Newkirk, New Mexico. It shows a rusty old car, left to bake in the sun by the ruins of an old gas station. 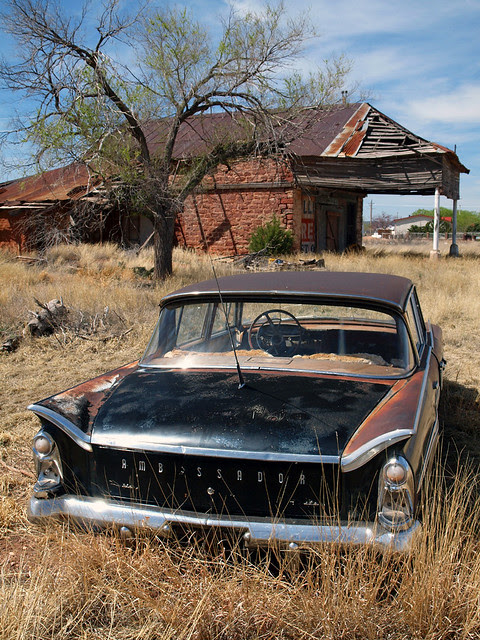 This is the fourth time that I've had a picture included as a part of Small Works on Paper, and the third year in a row. This is the shot currently touring the state as part of the 2010 tour: 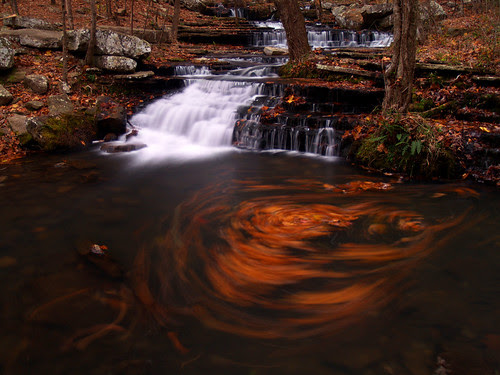 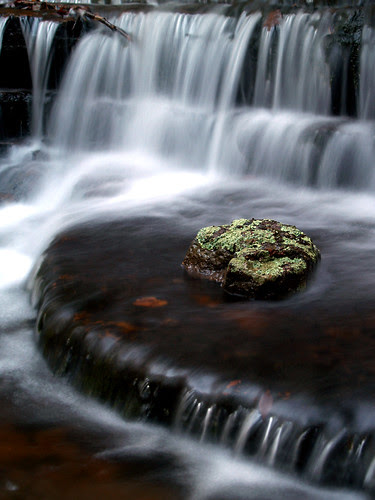 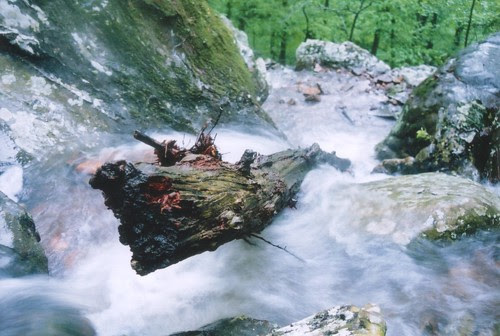 Taken along the trail to Cedar Falls, at Petit Jean Mountain...
Posted by Cormackphotos at 9:53 PM No comments:

My deepest apologies to the loyal readers of this website (all 3 of y'all!) for my delay in posting anything recently. I have made some pictures in the past few weeks, but I regret not going out to get pictures of the waterfalls created by Hurricane Hermione, which dumped some rain out over the Ozarks.

But if you're interested, here are a few pictures I've taken recently. All were taken in and around Little Rock.

This is a shot of a full moon high over the dome of the Arkansas State Capitol. 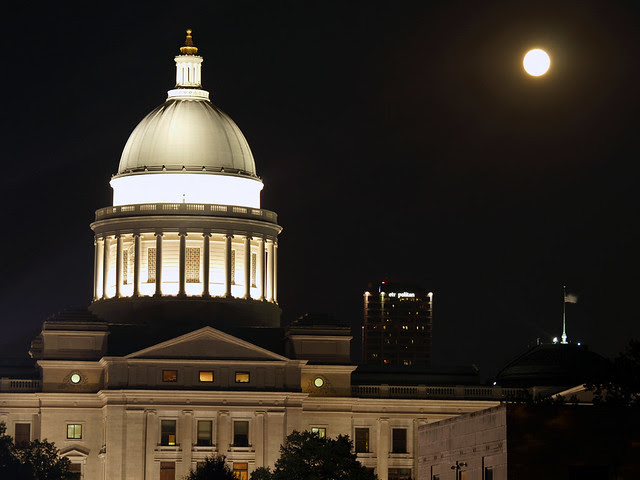 This shot was taken while standing next to the "Sugar Shack." A Little Rock old-timer might remember this place, it was a source of controversy way back in the early 1990s. It revolves around an old home (which looks like a Brady Bunch style bungalow house), which sits on state property behind the capitol. Apparently back in the early 90s, this house was the site of wild parties, all put on by the Arkansas Secretary of State. This was slightly before my time, so I hope I remember the details right....

Now the Secretary of State was an interesting character. Beyond hosting crazy parties at the "Sugar Shack," he also oversaw the daily operations of the state capitol building itself. While he was in office, he let a few few film crews have free reign over the dignified marble hallways of the capitol building. One of those film crews was for 1991 action film Stone Cold, which starred Brian Bosworth. Here's a small segment of a review, from Cool Target (my favorite movie review website, based out of the UK):
Awesome. There is simply no other word that can accurately describe this film. It's just awesome. The plotting may be pedestrian and the outdated haircuts and fashion embarrassing but Stone Cold is a simple, pure action film with intense performances and outstanding action. An often forgotten gem (except by those who have seen and appreciate it's awesomeness) Stone Cold ranks up their as a late 80s/early 90s action classic and a type of film they, unfortunately, just don't make anymore.

One of the climactic segments of the film included a shoot-out, filmed within the capitol building. The shooting was in the old Supreme Court room, and featured a motorcycle gang riding through the marble halls of the capitol. I remember hearing how the state had to spend money to clean up the skid marks from all the motorcycles that ran throughout the building.

But anyways, the above shot was taken by what was known as the "Sugar Shack," all those years ago. The night that shot was taken, the shack was quiet and empty.

Here is a view along Main Street in downtown North Little Rock: 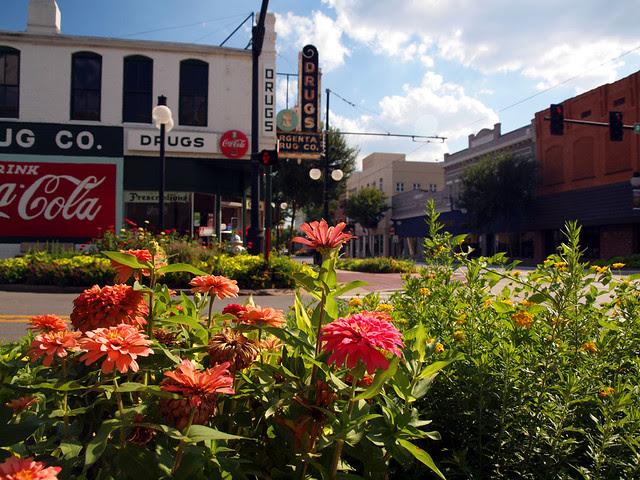 And here is a view of downtown Little Rock, from Riverfront Park in North Little Rock. 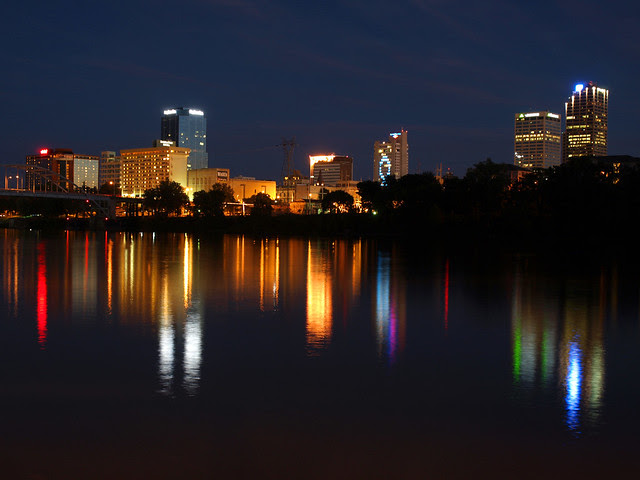 And last weekend, I met up with Zack and John for a few shots around downtown. We headed out to the Junction Bridge, which provides some great views of the river and the skyline. 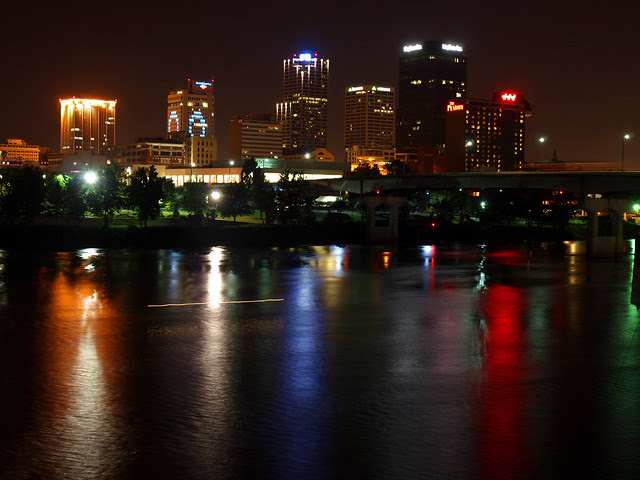 While standing on the bridge taking pictures, two drunk girls walked by. Upon seeing a camera sitting atop a tripod, they asked "are you taking pictures?"

I think it's funny when people see you by a camera and then ask what you're doing. I should have said "no, actually I'm playing Monopoly." But instead I said that yeah, I was taking pictures. So they told me to take their picture. I did, and then they demanded to see the shot. So I showed it to them, and they said they looked good and then laughed and walked off. Looking at the photo - they do look a bit drunk (I don't know if it's from the beers at the nearby bars, or if they were just intoxicated by my stunning good looks. Probably the beer). They didn't tell me their name, or how to send them the photo.

And finally, a shot looking down the Junction Bridge, with downtown Little Rock in the background: 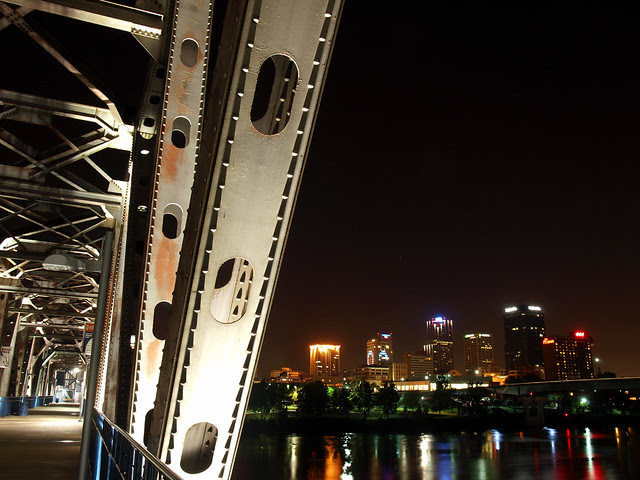