A lot of my family hails from the small town of Charleston, Arkansas, which sits in the far western edge of the state and is one of the two county seats of Franklin County. We've been there for generations, probably arriving in Charleston sometime around the 1850s. One of my great-great-great-great relatives, named A.J. Singleton, opened a stagecoach stop in 1854 just outside of Charleston, which was part of the Butterfield Overland Express Line that connected the Mississippi River to California. His daughter, Julia Singleton, was the first female school teacher in the area. They are both buried in a small cemetery in Charleston that my family maintains, which is on the National Register of Historic Places.

The old stagecoach stop is long gone, but there are a few old buildings in Charleston that have a connection to that distant family history. There is an old house, sitting just off of Main Street, that was either built or purchased by my relatives in 1871. Despite its age, the house has been preserved, with the original well sitting next to it (which still has water), and a few outbuildings like the smoke shack and the chicken coop that are still there (although they are definitely showing their age). The house has been vacant since the 1960s. 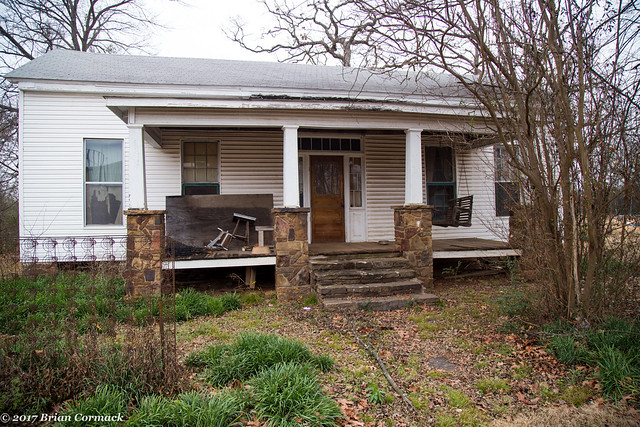 The old house has seen decades of history - the house sits by Main Street and was within view of the complex of buildings that are home to Charleston's elementary and high schools. The Charleston schools made their small note in history by being the first school district in the South to completely integrate all grades in 1954. The school has been designated a National Commemorative Site by the National Park Service. 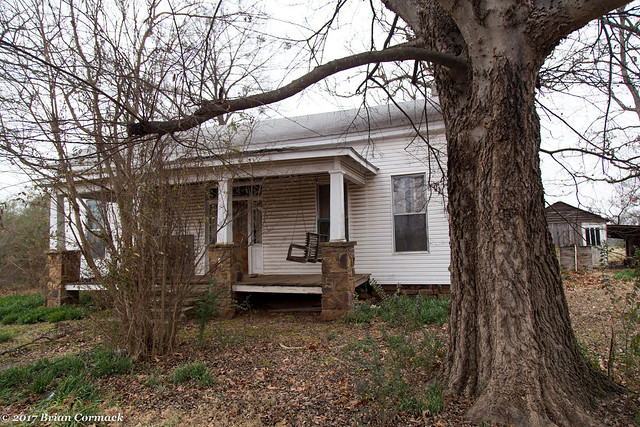 A distant branch of the family owns the house, and a decision was made recently to put the land up for sale. It sold, which unfortunately means that the house will probably be torn down soon. It's heartbreaking news. But I have to admit it's not too surprising. The land around the house was sold earlier this year, and a big gas station was built just feet away from the house. I figured it was only a matter of time before something like this happened.

When I was in Charleston to visit family for Christmas, I was given the opportunity to go inside the old building one last time to take a few pictures. So my Aunt Nette and I got the old key, which took a few tries to get to turn in the rusty lock on the front door. 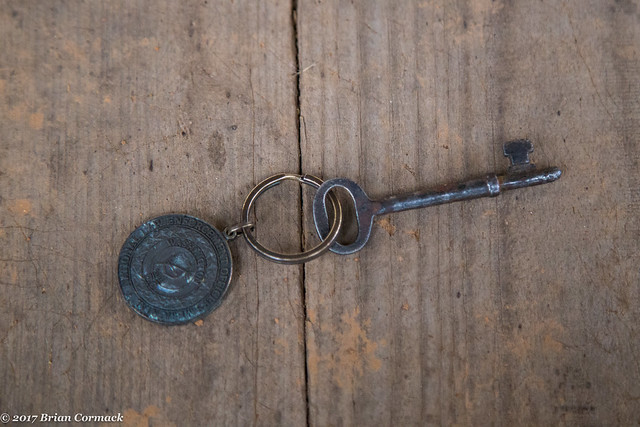 And a shot of the front door, with a few tattered curtains hanging in the windows. 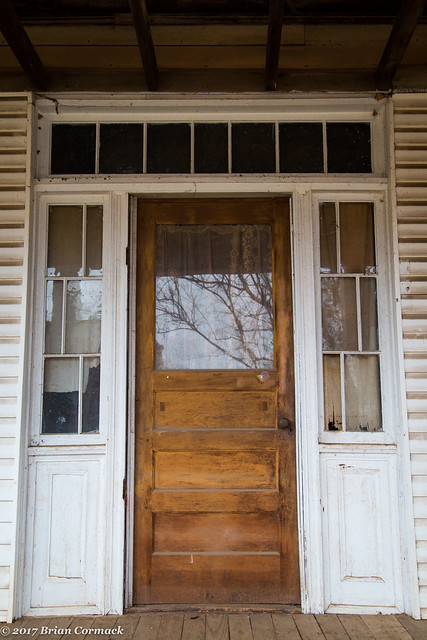 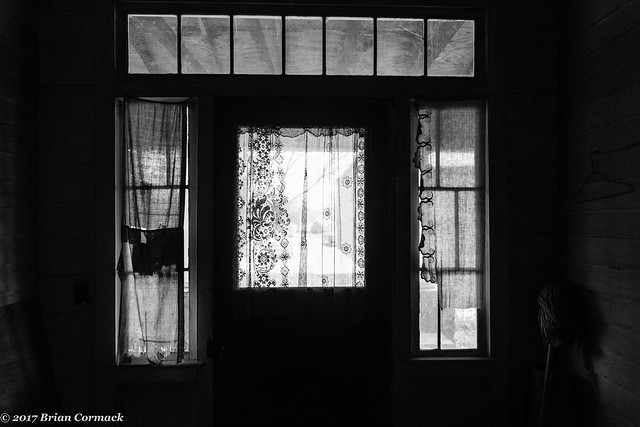 This was actually only the second time I've been inside the house, which has only really been used for storage in the last few decades. There was a lot of old junk lying around, with a thick layer of dust covering everything. 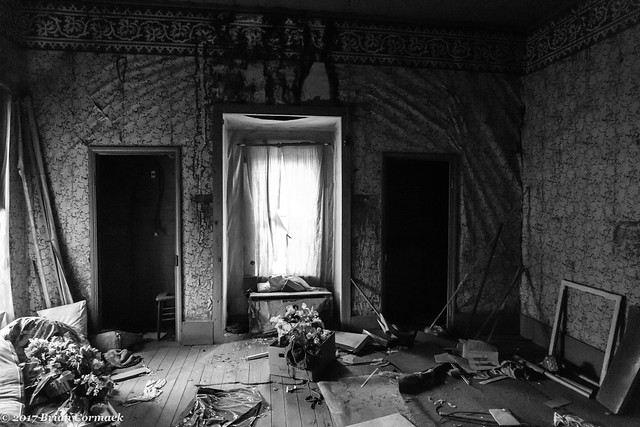 In this room we did find a few old books, including one with a handwritten note from 1891. I found one with a note that was dated 1906, which mentioned going to see Vice President Fairbanks (we had to look him up, he was the Vice President under Teddy Roosevelt). We kept the books. 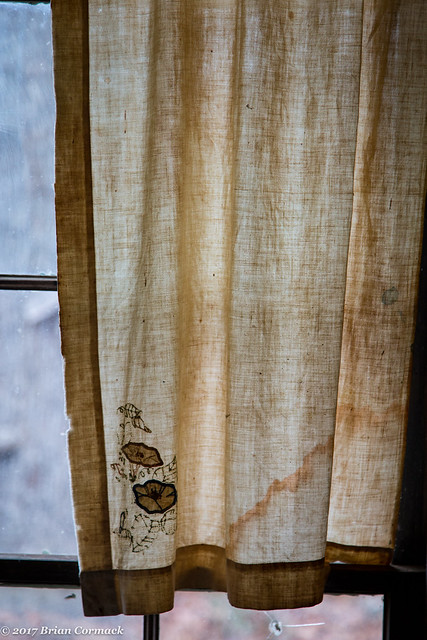 There was this bright orange-red curtain hanging in one of the windows, which I'm guessing was one of the last modern touches added to the house before people moved out (I'm guess it's from the 60s, but I could be wrong). 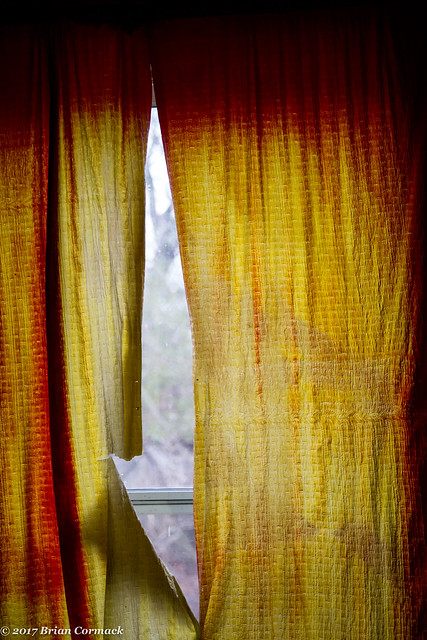 I took some more pictures, just to more document the place than anything else. It was hard to think that a place that has stood for so many years could possibly be gone soon. It seems like such an ignoble end to such a historic place. 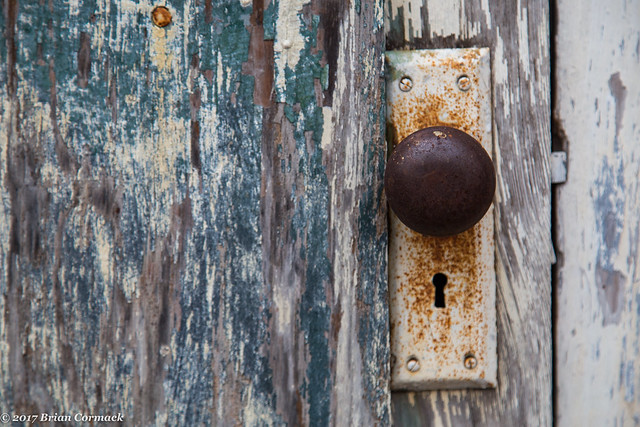 This is a view of the back of the house, which was covered with tin. There were also several old oak trees here, which I'm afraid will probably be cut down too. 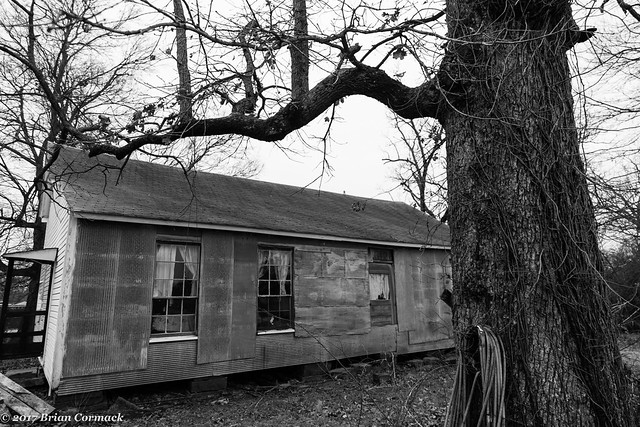 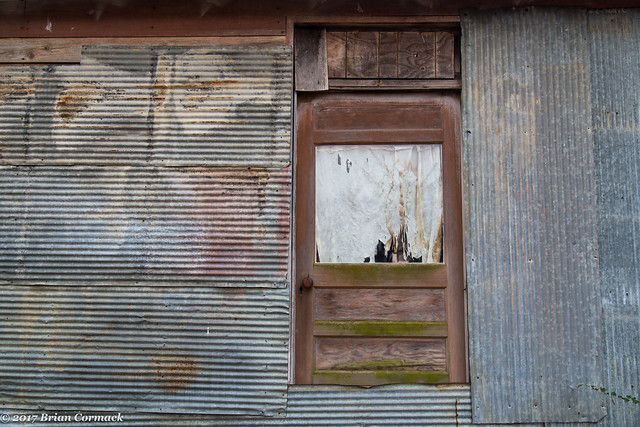 I ended up getting lots of pictures of this old window, with its frayed curtains and the peeling paint on the frame surround by rusty tin. 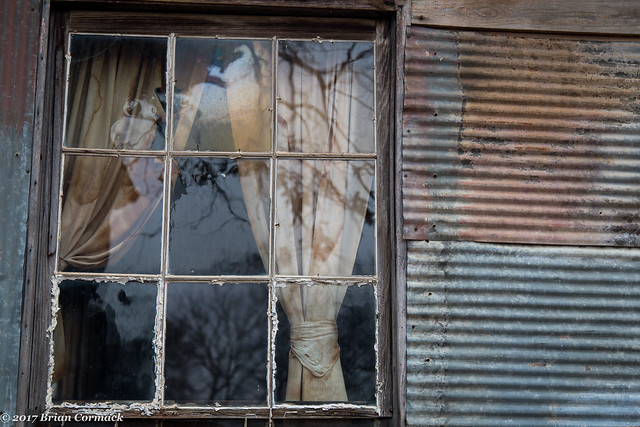 Maybe it was knowing that the house would probably be torn down soon, but the visit there just had an air of melancholy and sadness. Once the house is gone, this part of history which is shared not just by my family but by the small town of Charleston will be gone. I guess that there is an argument that the land can be used by someone new, to possibly create a new house that could provide new memories and history. But I hate that this house had to be sacrificed for that, just to make way for something new. 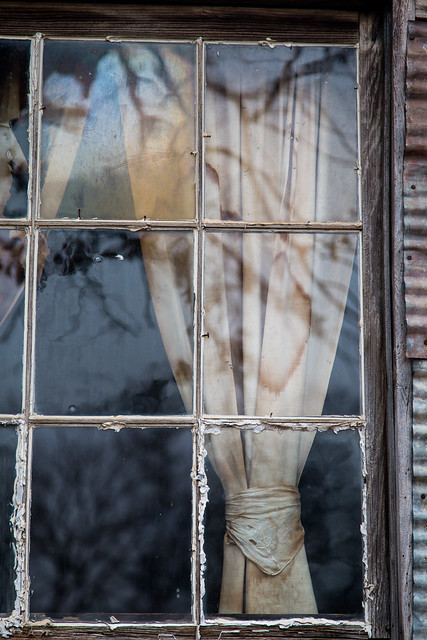 It deserves a better fate.
Posted by Cormackphotos at 10:37 PM No comments:

Recently, we had one of those cold and dreary foggy nights that can be just the perfect subject for a few pictures. I grabbed the camera and headed out for a few minutes to get a few pictures downtown, where the city lights were tinting the fog with an orangish hue. The branches of the old trees downtown were stretching out, contrasting against the foggy sky. Here's a tree by the new Broadway Bridge, right along the Arkansas River. 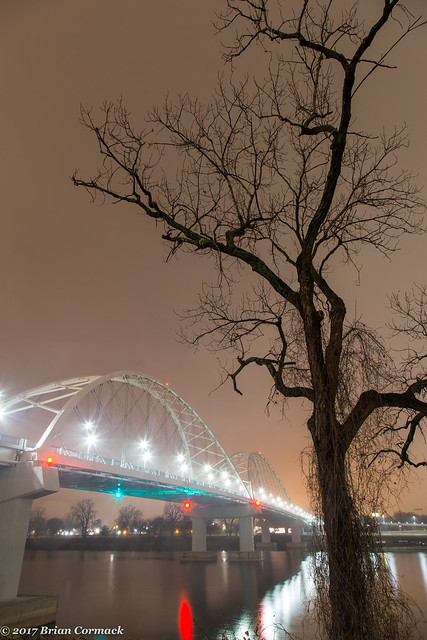 From there, I headed a bit further down the river to the Junction Bridge. The old rail bridge turned pedestrian bridge had red and green lights for Christmas, but in the long exposure the colors all sort of merged together to form this golden orange color. 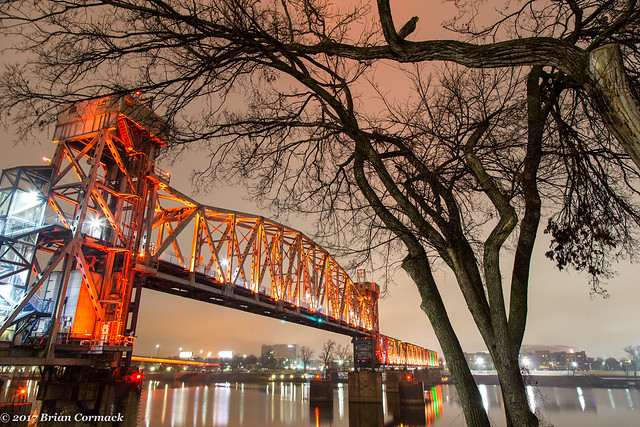 And then one last shot, with the lights of the bridge reflected in the still waters of the river. 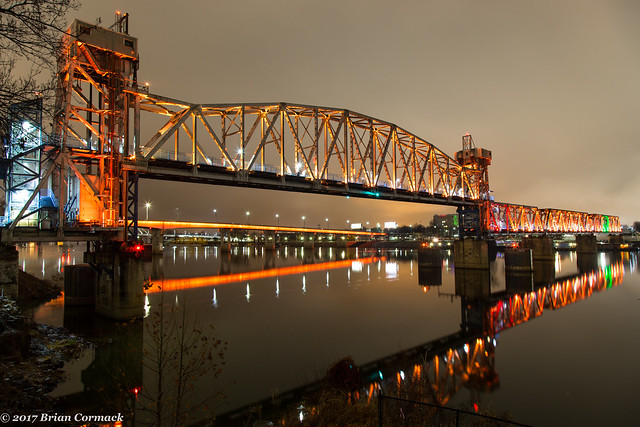 Posted by Cormackphotos at 11:00 PM No comments:

I headed out the other day to try to get a few pictures of Little Rock while it's decked out with Christmas lights. The most prominently decorated building in town would probably have to be the state capitol, which has over 100,000 lights strung across the marble building. I feel sorry for the poor state workers who had to go out and string all the lights, but it does look pretty cool. 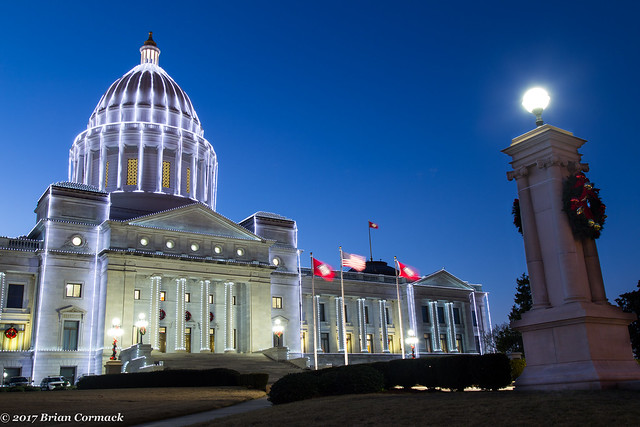 And while the lights do look cool, I do miss the old days when they had the "disco dome" going. 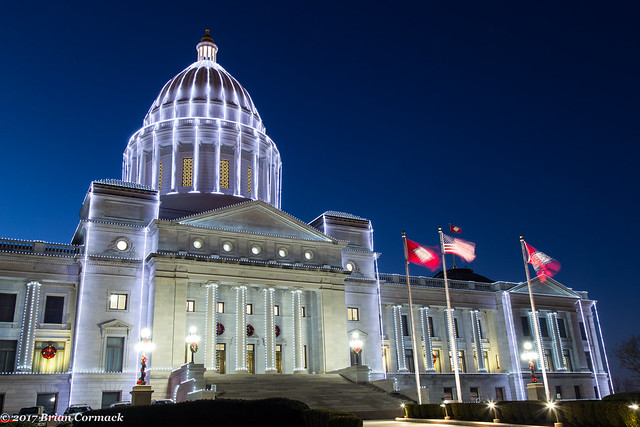 There were a few other people out there taking pictures, including someone taking pictures of a woman dressed as the Statue of Liberty and a man in a suit with a big ugly blonde wig, who I assumed was supposed to be Donald Trump. There were standing next to some signs, but I was too far away to see what they said. I'm guessing the photo shoot was to either to protest or support the President, or was for some really bizarre Christmas card. 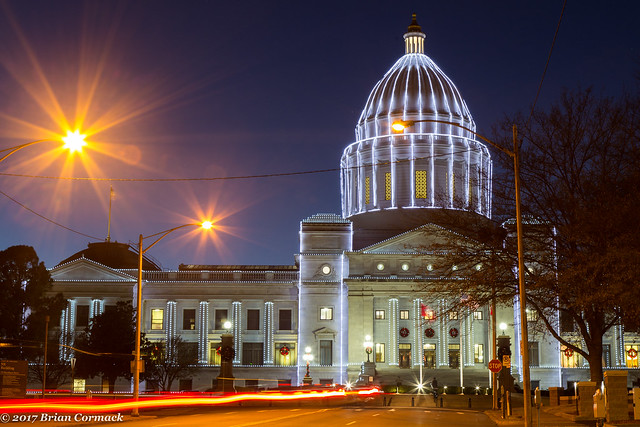 And one last shot of the Capitol, this time from across I-630. The dome stands above the lines of traffic, which is probably people rushing off to the mall. 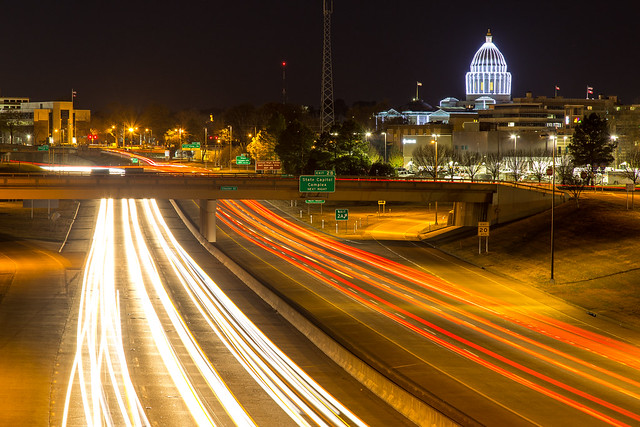 Before heading home, I stopped to get one more picture of some Christmas lights. This year, the city put up a 40 foot tall Christmas tree at the corner of Main Street and Capitol Avenue. But even at 40 feet, it's not the tallest Christmas tree around. That distinction belongs to another tree that shines down on Capitol avenue from the sides of the Bank of America Building. At 16 stories tall, it's probably the tallest tree around (at least as long as the people in the offices remember to switch on the lights in their windows). 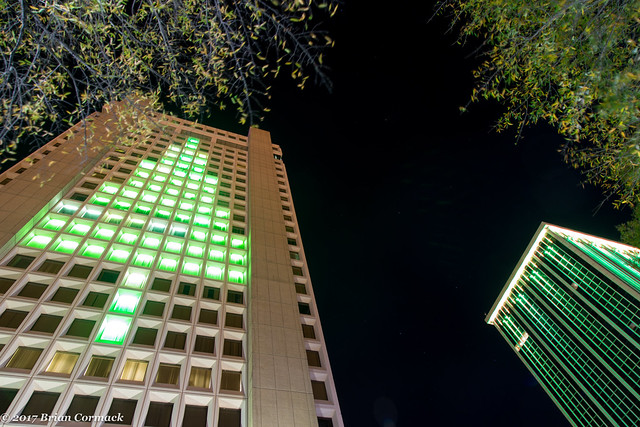 Every year, the state of Arkansas is kind enough to drape 100,000 lights on the outside of the state capitol building. And then, if weather permitting, there is a little fireworks show when the lights are switched on after a little ceremony. This year, instead of fighting the crowds gathered in front of the capitol, we headed behind the building where we could hopefully catch a slightly different perspective of the fireworks show. As an added bonus, we managed to miss the lighting ceremony, which has gotten too political the past few years.

When the fireworks started, I realized that I had seriously misjudged where the fireworks would be exploding and that my shot was woefully composed. I quickly zoomed out to get more of the fireworks, but one of the shots where I was zoomed in closer to the capitol turned out to be my favorite shot of the night. 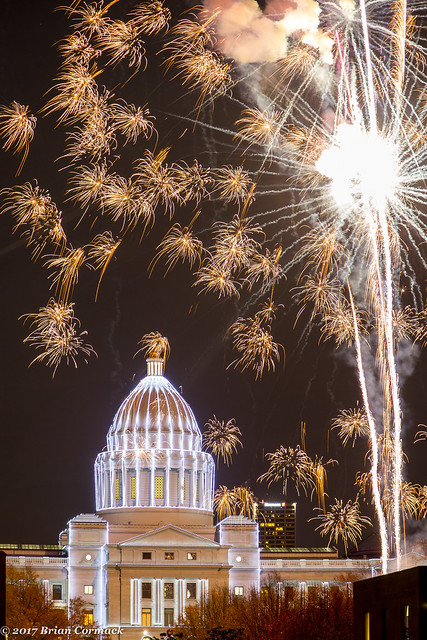 And a shot from near the end of the show, with a wider view of the capitol and the fireworks. By the end, there was a lot of smoke from the fireworks that hadn't blown away. But if you look closely, you can see part of the full moon sneaking its way into the shot on the left. 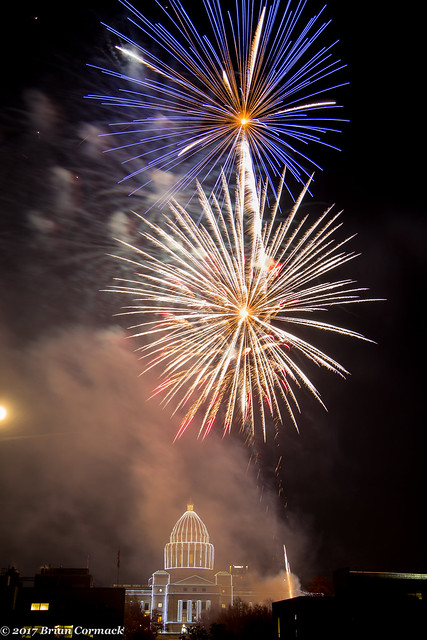 Posted by Cormackphotos at 11:20 PM No comments: