The next stop on the drive through the Delta was the city of Helena-West Helena. Situated along the Mississippi River, Helena has a surprisingly large amount of history and culture. The city was incorporated way back in 1833, and was an important stop along the Mississippi during the steamboat era. That location (about halfway between Memphis and Vicksburg), meant that it was a strategic spot during the Civil War. Later on, Helena was one of the places that helped bring about Blues music.

Like so many other Delta communities, Helena has faced some hard struggles in the last few decades. Unemployment, political divisions, crumbling infrastructure, a declining population and lingering racial unrest have plagued the town. But there are some positive changes happening, especially in the downtown area. It really seems like the people there are trying to turn things around and bring life back to Helena.

I say this because just about all the pictures that are going to be posted here are going to be of abandoned buildings, but that's because I've been working on a project involving endangered architecture in the Delta so that is what I focused on. Wile there are many abandoned and decaying buildings here, that isn't all there is to this city.

Anyways, when I drove into Helena my first stop was the old Centennial Baptist Church. The church was built in 1905 and has been listed as a National Historic Landmark. The church was led by the Reverend Elias Camp Morris, who was considered to be one of the most progressive African American ministers at the turn of the 20th century. The architect of the church was Henry James Price, who like Morris was born into slavery. The church they built is impressive, but I'm not an expert at architecture so I'll let the Encyclopedia of Arkansas explain it. They say the church is "a stunning brick Gothic Revival building. Typical Gothic architectural elements are ribbons of lancet windows, buttresses, and brick corbelling. Two tower entries on the south and north corners of the church provide access to the 1,000-seat sanctuary. Buttresses divide the elevations of the building into bays, and corbelling on a prominent front gable creates a vergeboard effect. Brick is also used to create decorative patterns on the tower friezes in the form of crosses and squares. Centennial exhibits the typical lecture-hall floor plan with a raised chancel for the choir, pulpit, and lectern. The most striking features of the sanctuary are exposed curved beams, similar to medieval European hammer beam roofs. Curving braces elaborated with pendants arc from the walls, and original suspended multi-globe light fixtures emphasize the height of the beadboard ceiling. A 1908 pipe organ constructed by Henry Pilcher’s Sons of Louisville, Kentucky, is situated in the center of the chancel.". Over the years, the church hosted civil rights pioneers like Booker T. Washington and W.E.B Du Bois.

The last service in the church was in 1998, and since then the building has been boarded up and closed. But the building has not been forgotten, with several attempts being made to preserve and renovate the building into a cultural center. 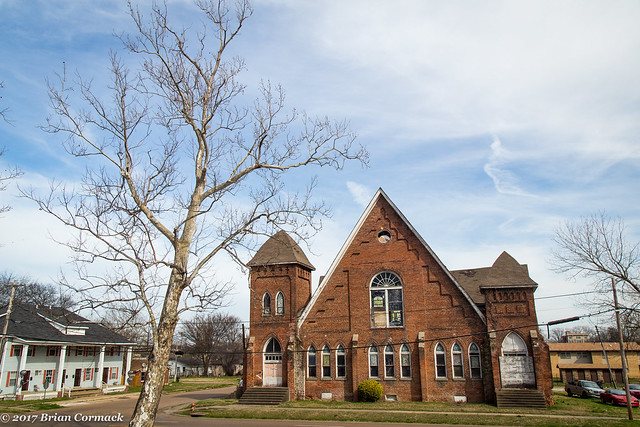 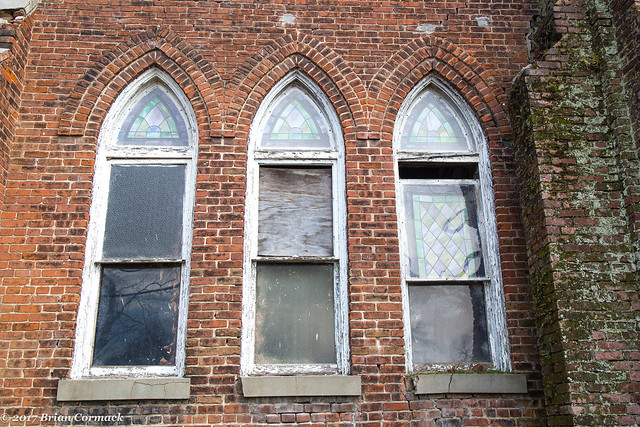 The church actually sits directly across the street from the recreation of Fort Curtis, a fort that originally was built by Union troops during the Civil War. Helena's prominent spot on the Mississippi River meant it was taken over fairly quickly by Union troops. Several fortifications were built around the city to help defend it from the Confederates, including Fort Curtis and several battlements placed on the low hills that surround Helena. The defenses were tested on July 4, 1863, when Confederate troops attacked the city. They didn't have much luck, and Helena remained in Union control for the remainder of the war.

A recreation of the fort has been constructed, with several canons placed along the site of the old battlements. This one almost seems like its pointed directly at the old Centennial Baptist Church. 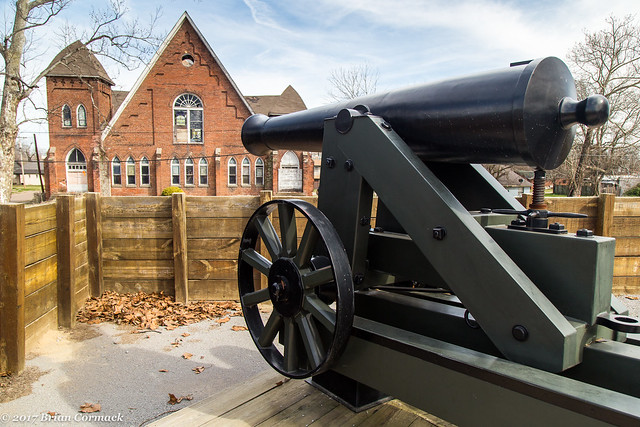 I headed a few blocks over and parked in downtown Helena. I walked a few blocks around Cherry Street, passing by the old Cleburne Hotel. The hotel was built in 1905 but has been closed now for several years. Near the front door you can still see an old painted sign which is promoting a breakfast at the cost of only 25 cents. 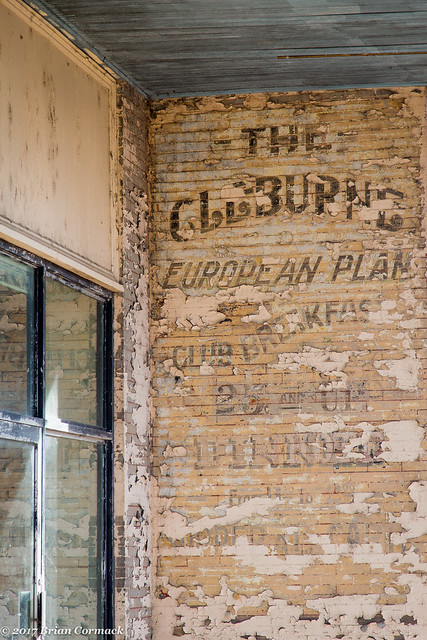 And the view of the back of the hotel, featuring a variety of boarded up windows. I would love to be able to get permission to be able to go inside here to take pictures. 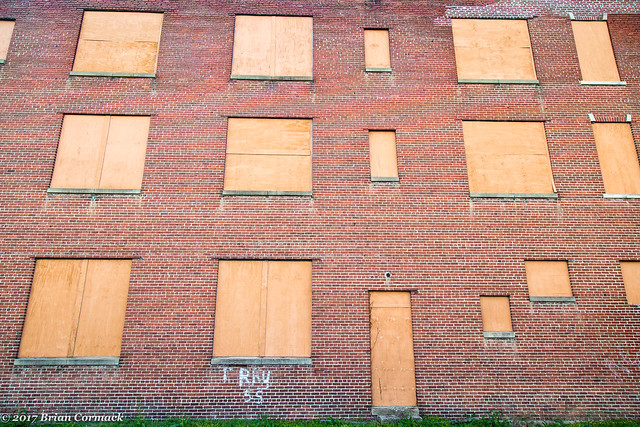 Just a few blocks away is this old abandoned building, which looks like it may have been a warehouse at one time. This doorway opens out onto a walkway that overlooks the Mississippi River levee. 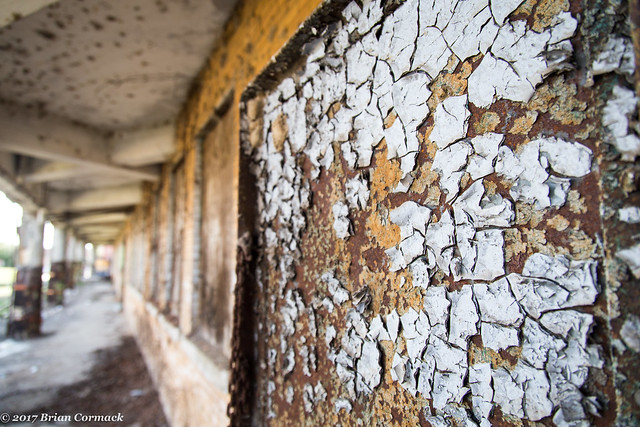 On the floor above, a tree has started growing through one of the windows. 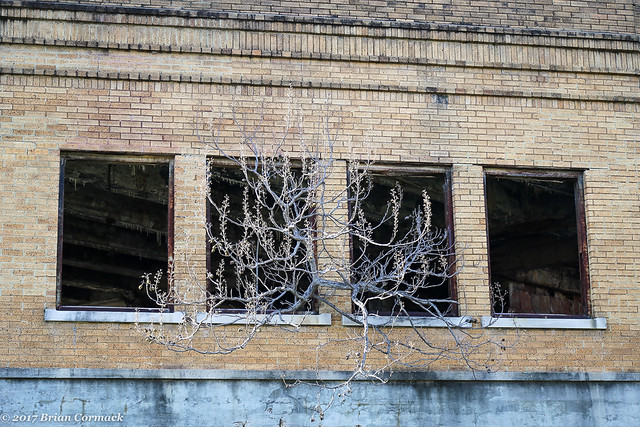 Across the street was another abandoned building, which dates back to 1910 and used to house the Helena Wholesale Grocer Co. The roof of the building has recently collapsed, and work is underway to clean out the debris and tear down the building. Part of the walls still stand, so you have the odd sight of blinds still hanging on the windows in the front of the building, but there is no roof and the interior has been cleaned out. 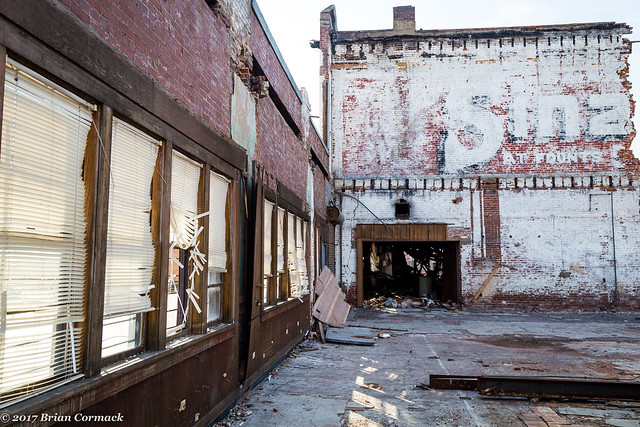 There is a storage room nearby that has mostly survived intact (besides missing most of a wall). The shelves are still loaded with papers, including a bunch of payroll records that date to the 1970s. It amazes me to think that someone probably spent an incredible amount of time preparing these records, and carefully stored them away. But then they were left to sit for years, and are now sitting in the open and exposed to the weather. All of these papers will probably just be thrown in the trash pretty soon. 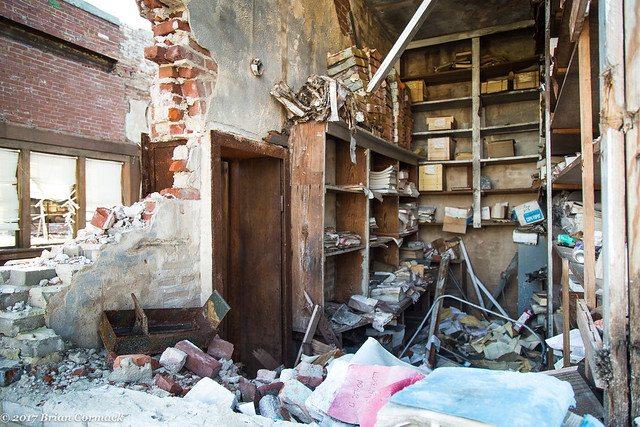 I walked back down Cherry Street, passing by this row of old buildings just across the street from the Cleburne Hotel. The buildings look to be closed off, with boarded up doors. But there is still some stuff on display, including a creepy mannequin looking out through one of the windows. 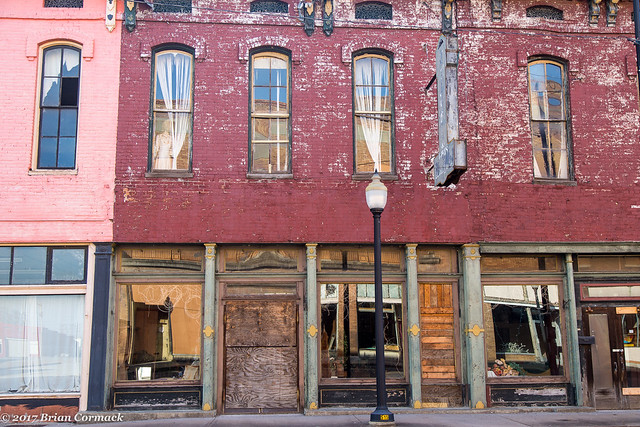 Just south of downtown Helena is an old industrial area, which has a few old factories and warehouses. I drove by this one old building and had to stop. It looks to have been abandoned for quite some time. The cavernous interior was empty, except for a few trees trying to grow on the concrete. 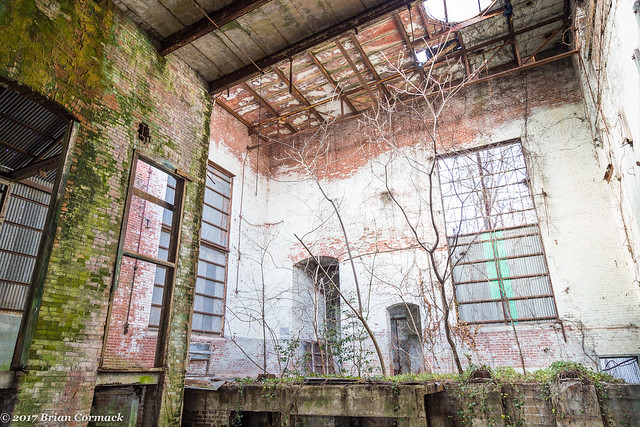 I haven't been able to find anything about the history of this building. But I would love to know anything about when it was built and what it was used for. 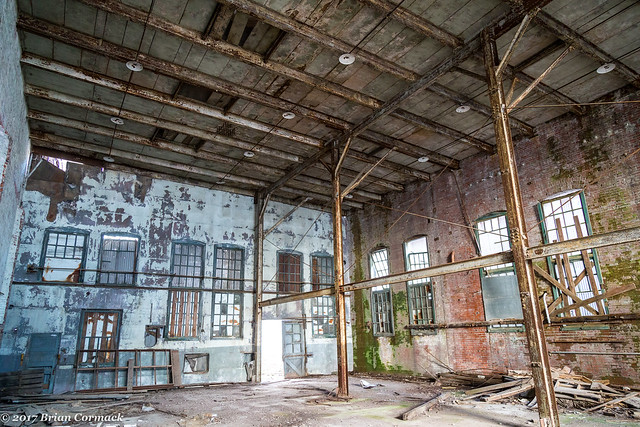 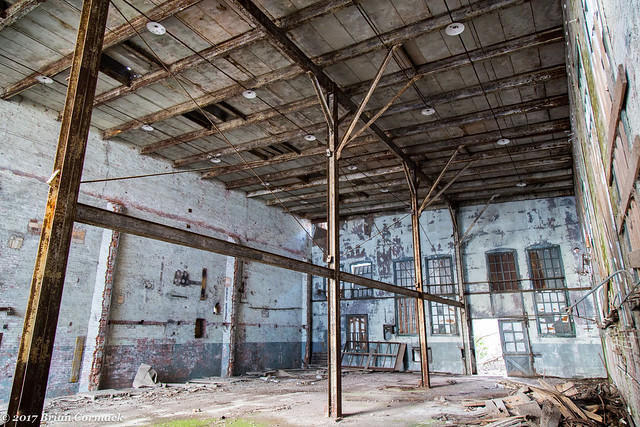 The rusty metal thing here was huge, probably about the size of a car. 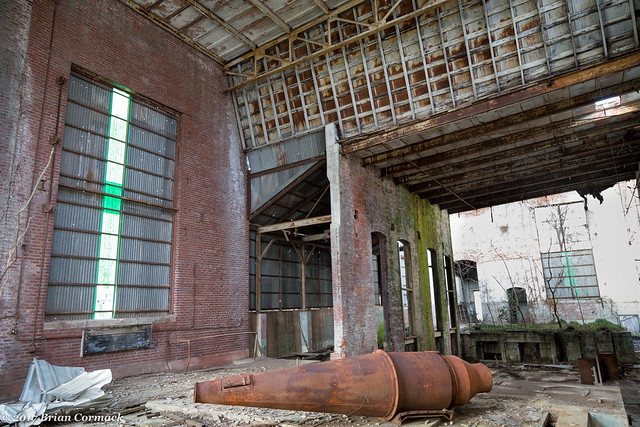 Towering over the building was this old chimney, which was partially covered in vines. It might still be the tallest structure in Helena, although it probably hasn't been used in years. 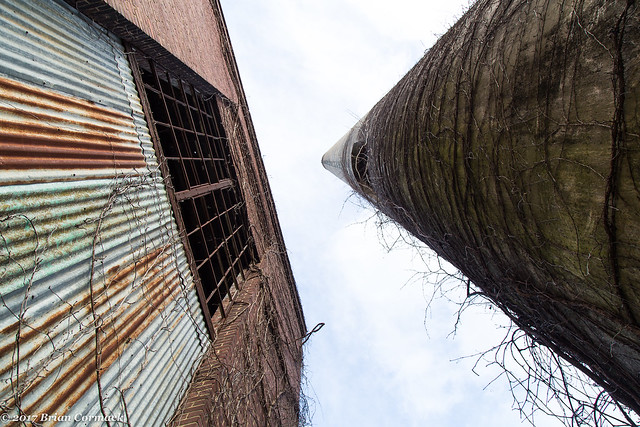 After that, I started the drive back towards Little Rock. I did make one more stop along the way, just before it got dark (those pictures will be posted soon!).
Posted by Cormackphotos at 10:02 PM No comments:

The next stop on the drive through the Delta was the old Phillips County Jail. The jail, long abandoned and vacant, sits just south of the small town of Marvell. 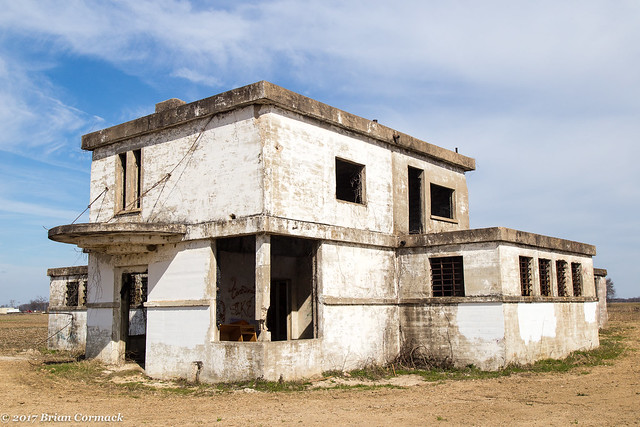 The prison was built as part of a penal farm between 1935 and 1937 by the Works Progress Administration. It was used as a prison until it closed in 1973. It has been empty since then, although judging by the graffiti there are several people who pay regular visits here. This is one of the rooms with the smallest amount of graffiti. 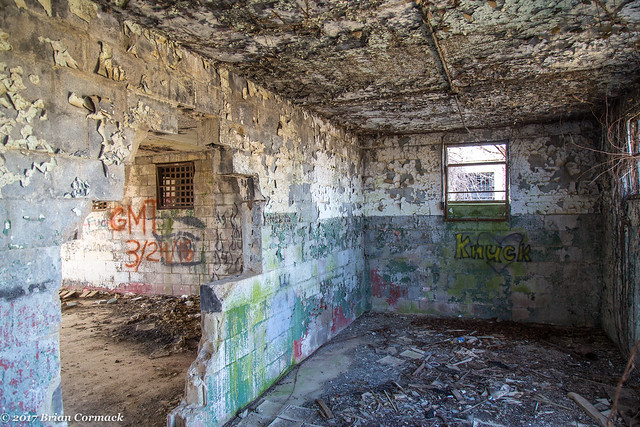 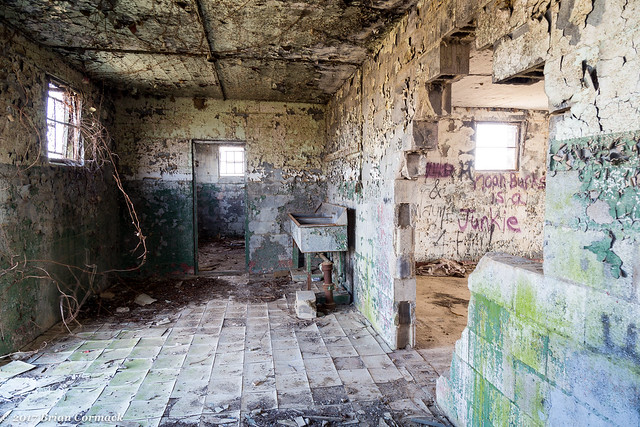 The paint on the walls (at least the paint not covered by spray paint) is peeling and cracking. This section of paint almost looks like an aerial view of a river system. 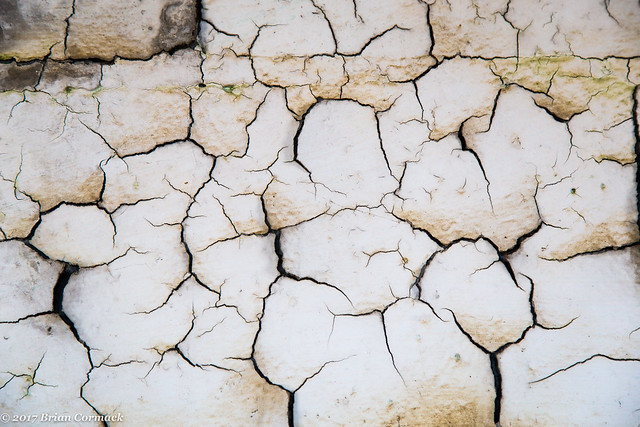 And another shot of the paint, reflecting years of sitting in the heat and humidity of the Delta. 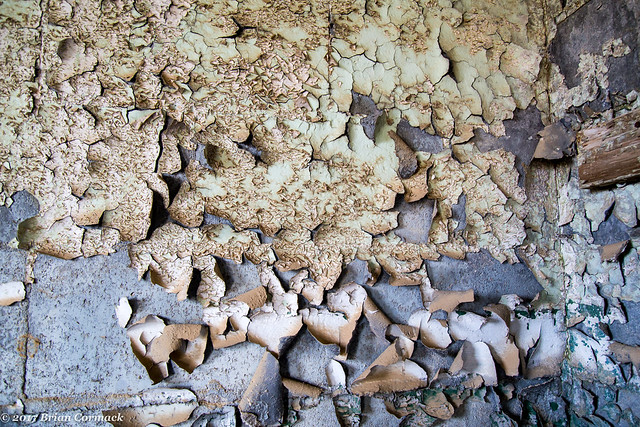 The prison feels dark and claustrophobic, with narrow concrete walls. It didn't seem like it would have been the most enjoyable place to be, especially since it was built in the days before air conditioning. 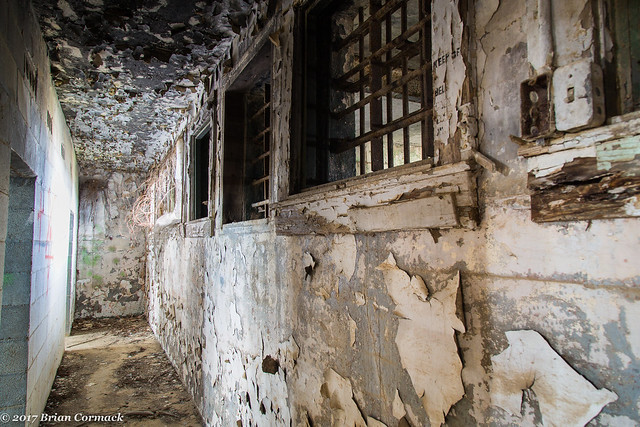 After taking a few more pictures, I headed back to the car and then drove into Helena (pictures coming soon!).
Posted by Cormackphotos at 11:00 PM 2 comments:

My work was kind enough to be closed for President's Day, and I took advantage of the free time and headed back out to the Delta to take some pictures. I drove east towards DeValls Bluff, and then headed south and drove by the old Idlewild School. The one-room schoolhouse was built in 1921, and was used until 1949 when the school was consolidated into the DeValls Bluff school system. I think the building may still be used as a little community center. 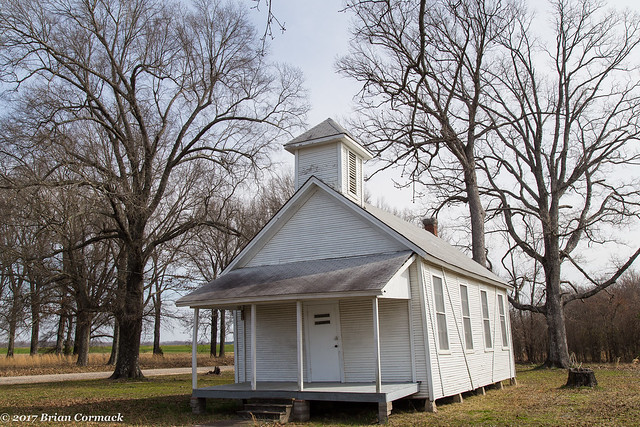 From there I drove to Clarendon, the county seat of Monroe County. Clarendon sits on the White River and has a good collection of old and historic buildings (including the impressive courthouse, which was built in 1911). But just across the street from the courthouse, many of the old buildings are in pretty bad shape. The back wall of one building had completely collapsed, offering a view of the interior that was a cluttered collection of rubble and trash. 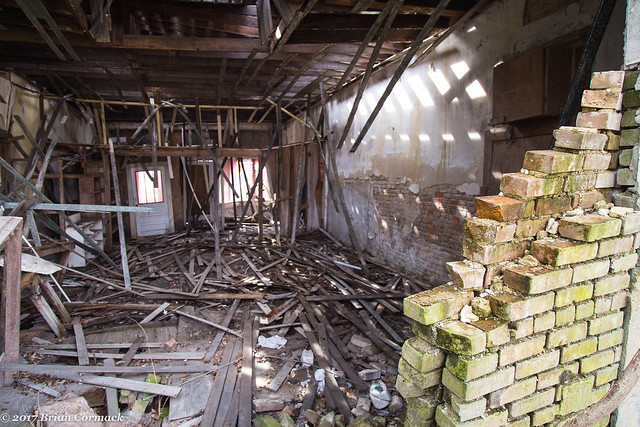 Just down the block is the old Bondi Brothers Building, which was built in 1904. The two story building was put on the list of the most endangered historic buildings in the state. The parapet on top of the building is deteriorating, and bricks have fallen down and crashed into the sidewalk below. This is the view of the back of the building. 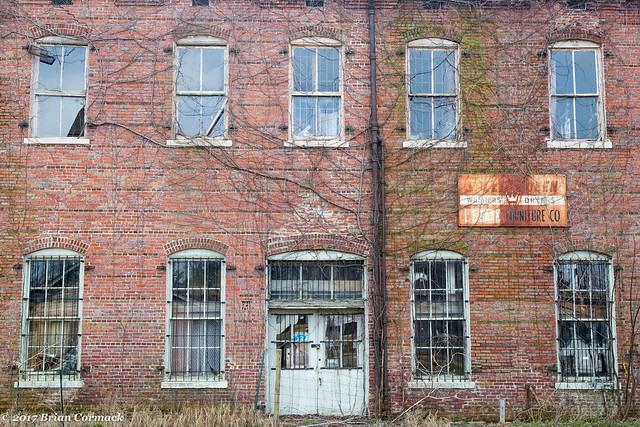 From there I continued driving further east, heading deeper into the Delta. I stopped at two old buildings (which were more like shacks) that were sitting off of the road in a clearing. The houses used to sit next to Palmer's Folly, a historic mansion that was built here in 1873. The mansion was a two story brick building that was considered to be one of the best examples of 19th century architecture in the area. It was abandoned for several decades, but just as plans were being made to renovate and save the house, it caught fire and burned down. Now all that is left is a pile of scorched bricks, solemnly overlooked by these two old shacks. 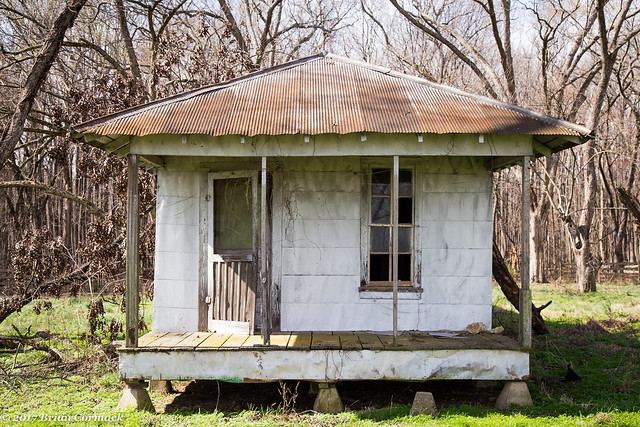 I didn't get too close to this one, because it was guarded by a lot of active wasps. The door to the other building was open and free of wasps, so I took a look inside. There I found this old sofa, and an interesting assortment of peeling wallpaper. 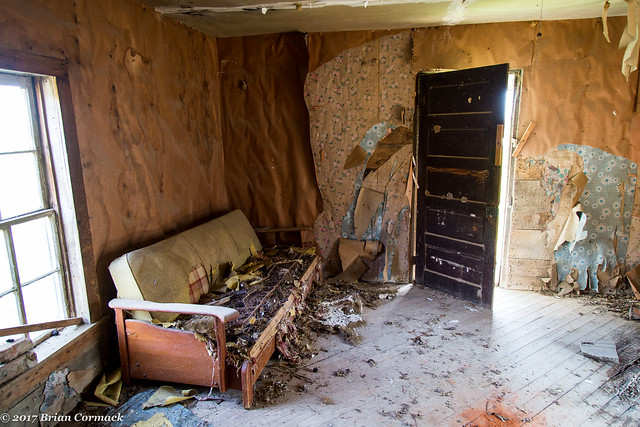 After taking a few pictures I got back in the car and drove further east towards Helena (more from that trip coming soon!).
Posted by Cormackphotos at 11:13 PM No comments:

When the Albert Pike Hotel opened in downtown Little Rock in 1929, it was considered to be one of the best hotels in the South. The hotel was built in the Italian-Spanish Revival style and features stained-glass windows, tiled roofs and decorative tile and iron work. It cost a cool $1 million to build the hotel, a pretty big sum for the 1920s.

Most of the grand hotels that were built in that era are gone now, either torn down (like the Marion Hotel in Little Rock or the Majestic in Hot Springs) or an empty shell of a building (like the Hotel Pines in Pine Bluff). Like so many other old hotels, it too faced struggles and faced a decline in popularity. But the Albert Pike was saved when it was purchased in 1970 and converted into residences. It now serves as a home for seniors. 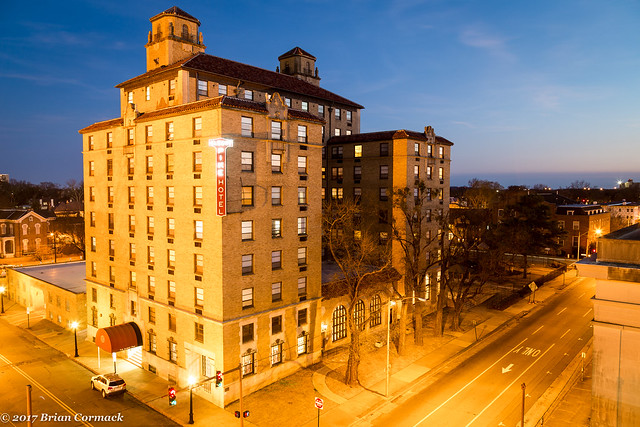 Posted by Cormackphotos at 11:20 AM No comments: