There is one part of the Buffalo River that I have been wanting to visit for years, so while I was at the River it seemed like the perfect opportunity to check it out. The place is called the Pickle Hole, and apparently it is a big dill...

There are apparently a few different way to reach this spot. I opted to follow the River, which started out easily enough. But the path I followed soon began to run up alongside a steep hillside, which turned into a scrabble along rocks and trying to not slide down the hill into the river. It would be easier, it seemed, to cross the Buffalo and continue hiking on the other side of the River. So I found a somewhat shallow place to cross, careful to not drop the camera in the water (I did stop to take this picture though): 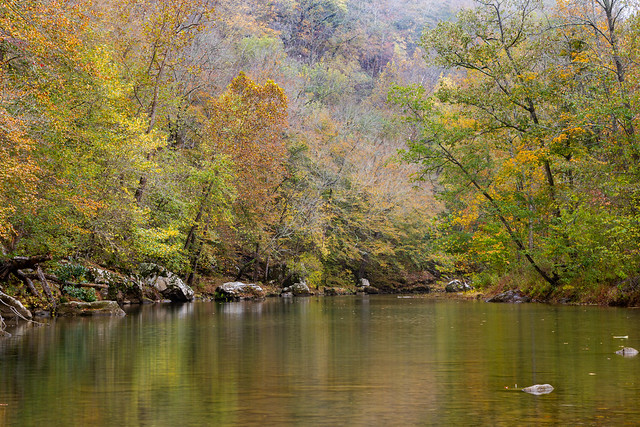 This way was much easier, although there were a good number of thorns that did were eager to ensnare passing hikers. But the Buffalo River is always scenic, and the fall colors along the water shined. 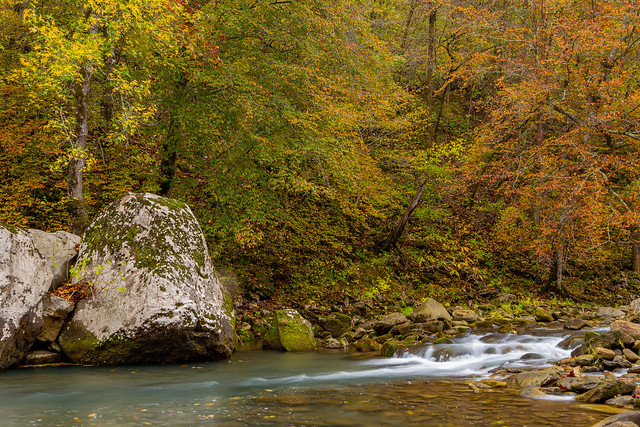 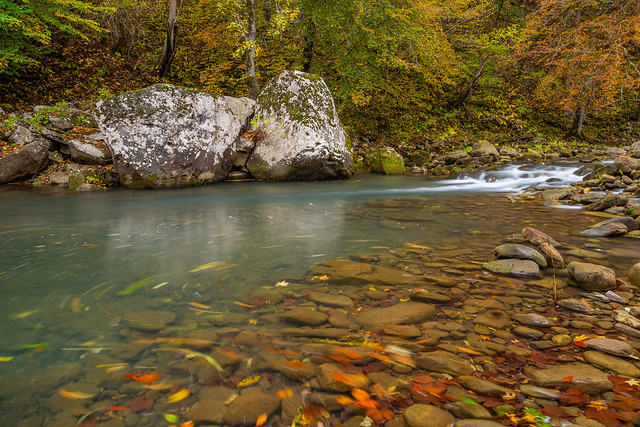 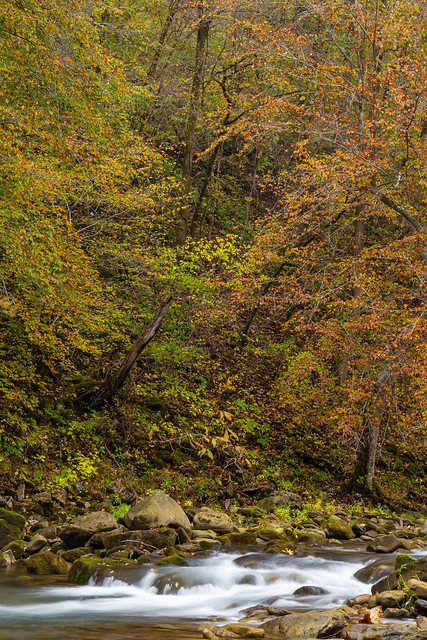 And finally I made it to the Pickle Hole, which is a deep pool of emerald water that was decorated with many huge boulders. It was beautiful. 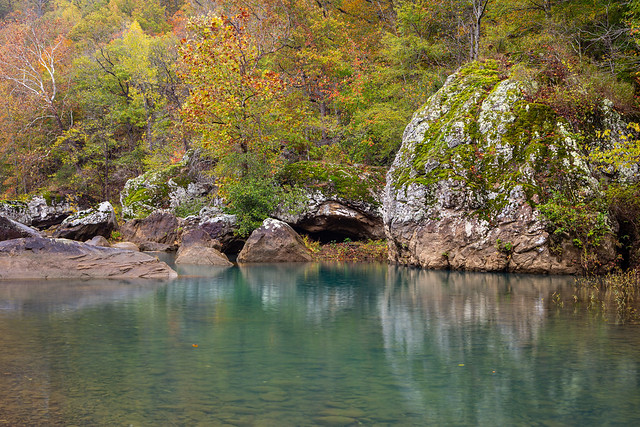 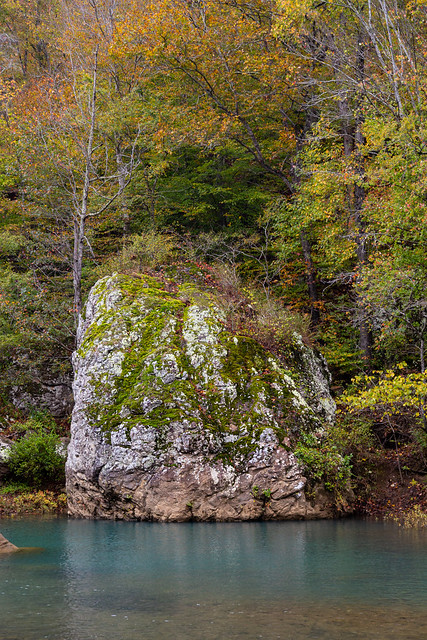 Lately I've started bringing headphones with me so I can listen to music while I hike. I know this violates all sorts of rules about being in nature and enjoying the wonders of the wild (Thoreau would surely disaprove). But I do it because my brain hates me, and while I'm hiking it likes to play the most obscure songs randomly in my head. Usually they are songs that are annoying or ones that I don't really like. This has gotten worse since we've had kids, which has provided my brain with a jukebox's worth of bad children's songs to play (like Baby Shark or Cocomelon). But it was around here, while trying to get pictures of these rocks, that I accidentally dropped the headphones in the water. Of course they stopped working after their dip in the Buffalo. But no worries, the soundtrack in my head was ready. As if anticipating that I would do this, it had already queued up a random song (it was one that is on a lullaby playlist on my phone that we sometimes use to help get the baby to sleep). 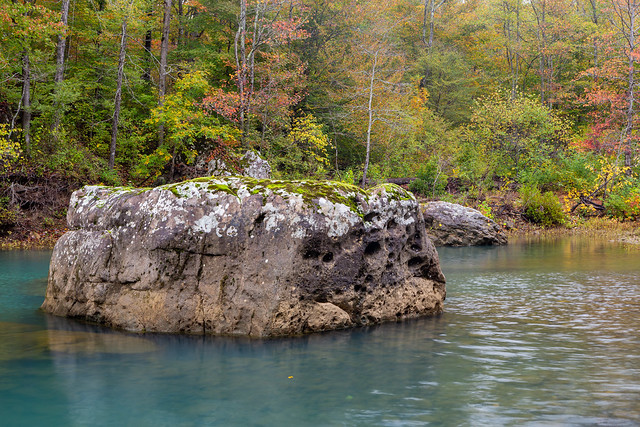 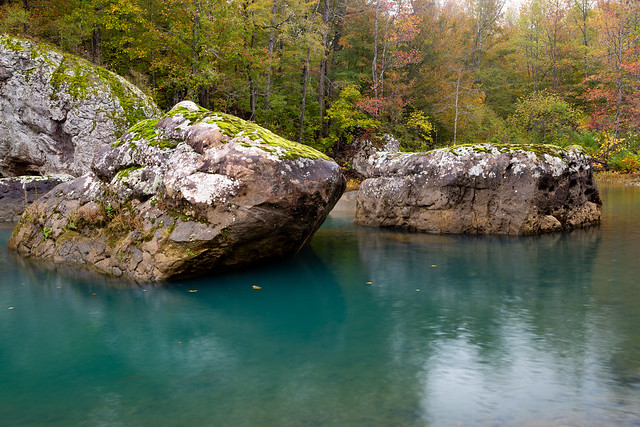 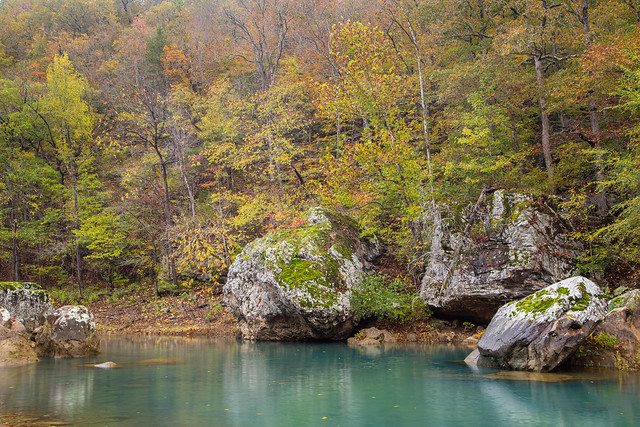 I was amazed at how pretty this stretch of the River was, and how great the fall colors were. 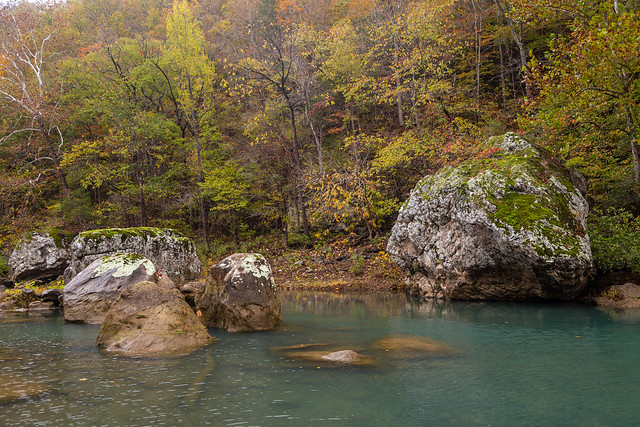 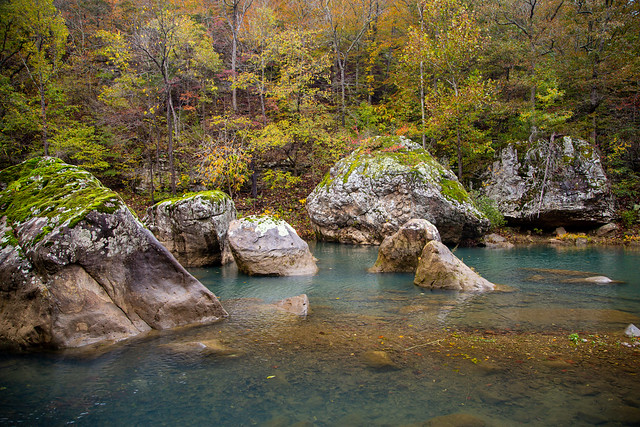 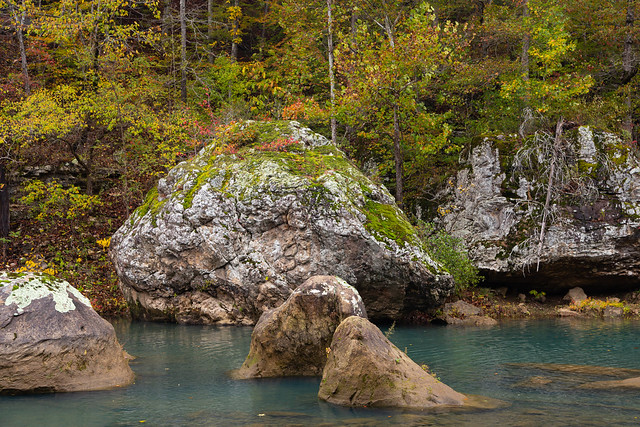 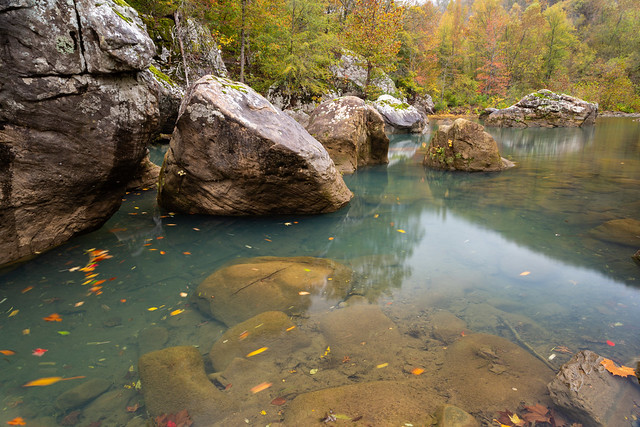 While on the edge of the River admiring the view, I stepped on a slick rock and my legs went out from under me. I ended up partially in the water, somehow able to keep the camera from smashing on the rocks or being submerged in the river. My poor tripod banged on the rocks and ended up in the water, luckily it wasn't broken (just soaked). The only damage was a cut on my leg from where I hit a rock. But that, along with hitting a deer a few hours earlier in the car, made it look like it was going to be a fun day out in the woods (and it wasn't even Noon yet). 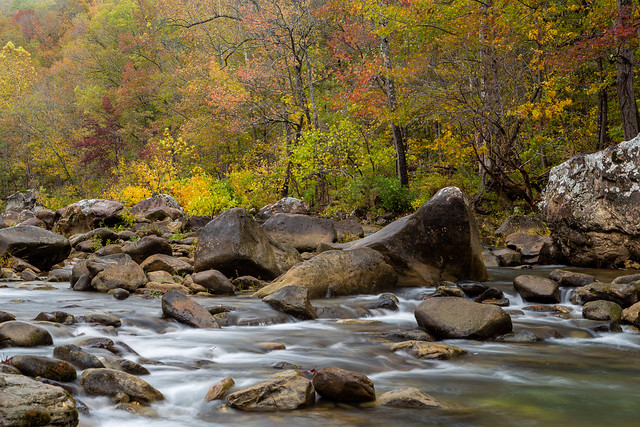 Pickle Hole gets its unusual name because this area was once the home of W.P. "Pickle" Edgmon, back in the olden days. It was more recently the home of the Hedges family, who the nearby Hedge's Pouroff is named after. The Hedges bought this land in the 1960s, and lived in a house that once sat on a hill above the river. The Hedges were conservationists, and were among the group that advocated for the Buffalo to be protected as a National River. In the 1990s, their home burned down. It's believed that it was set by people who were opposed to the land along the river being taken by the government (although that was never proven). Now all that remains of their home are two chimneys, and a lonely old barn. 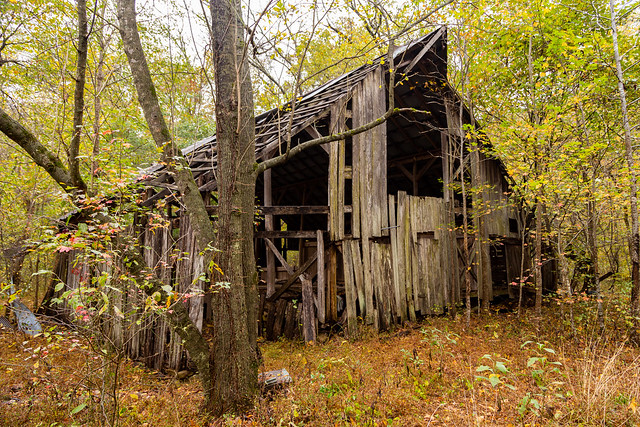 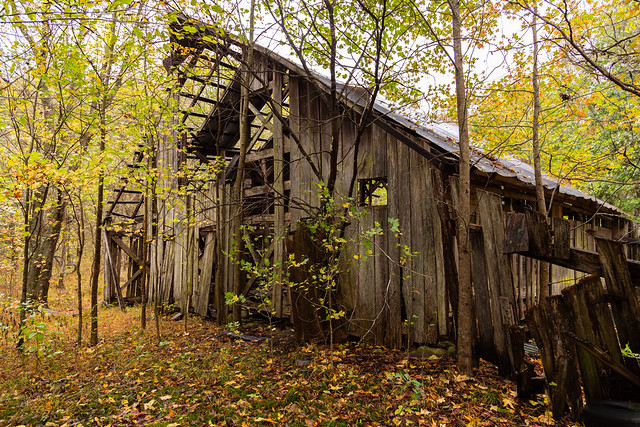 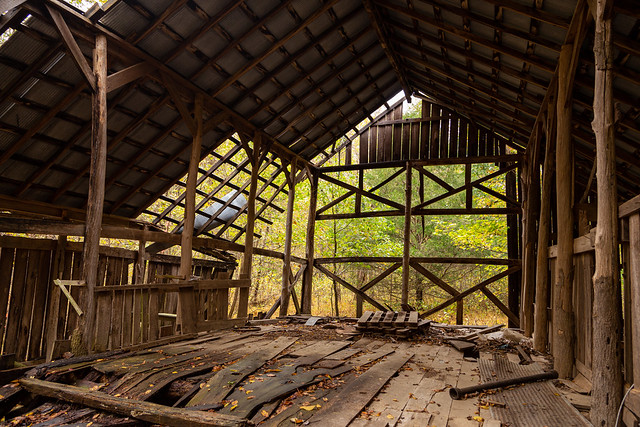 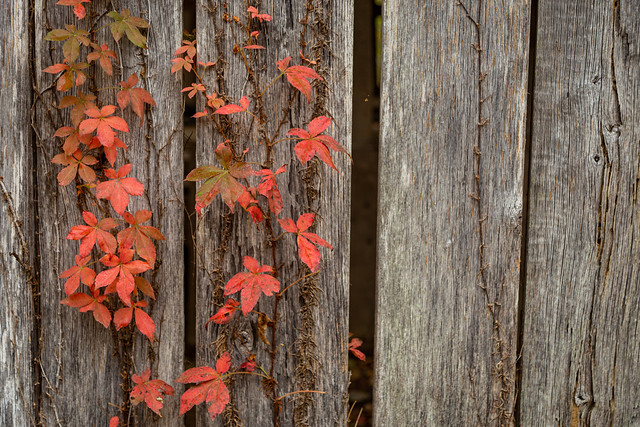 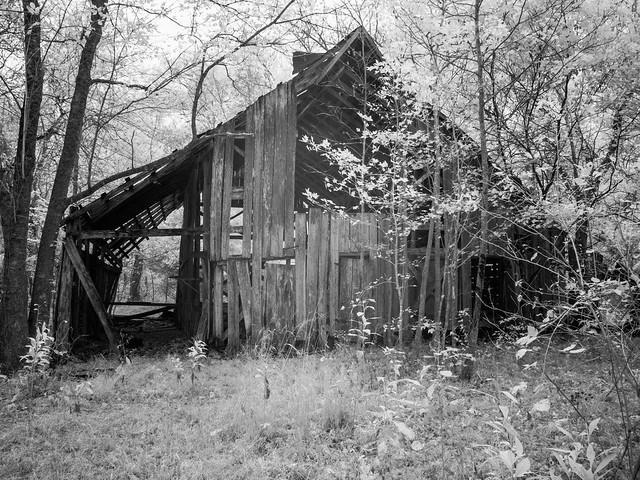 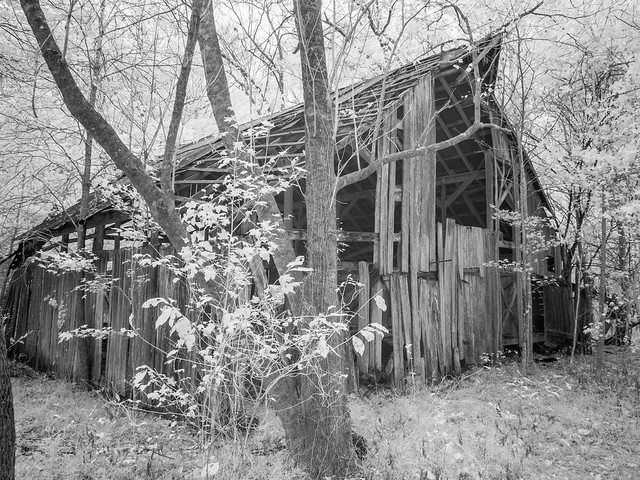 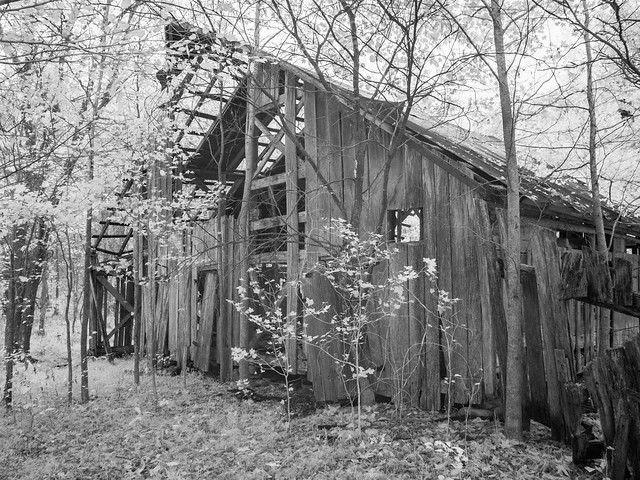 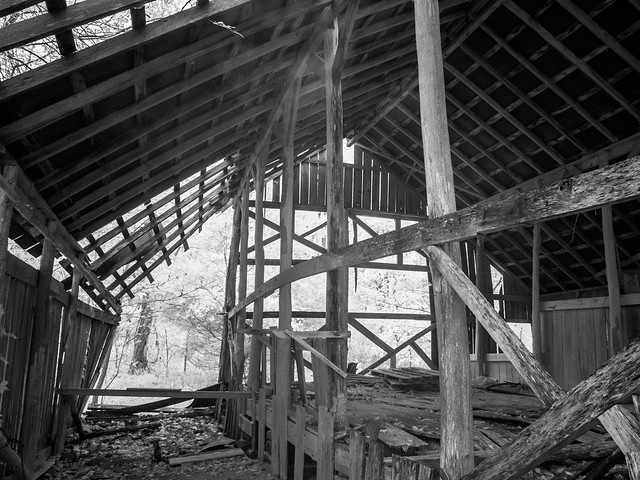 The hike back was much less dramatic, I managed to not fall down or drop anything else into the water. I did stop a few times to admire the scenary on the way... 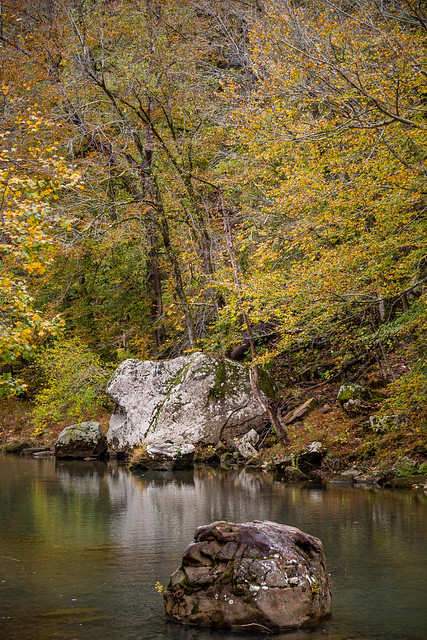 Posted by Cormackphotos at 11:05 PM