The plans for the rest of that day involved driving to the town of Lamar to catch some high school basketball. Lamar was playing host to my cousin's team - the Charleston Tigers. It would end up being the second night in a row I watched that team play, after having driven up to Atkins the night before to catch another game. I had the camera with me during the Atkins game and went down onto the court to take some game pictures. Luckily they have decent lights in the Atkins gym, since I managed to get some decent pictures of the game. One of the shots was even published on the front page of the newspaper! It was the Charleston Express, and it gave me something to brag about on my resume. 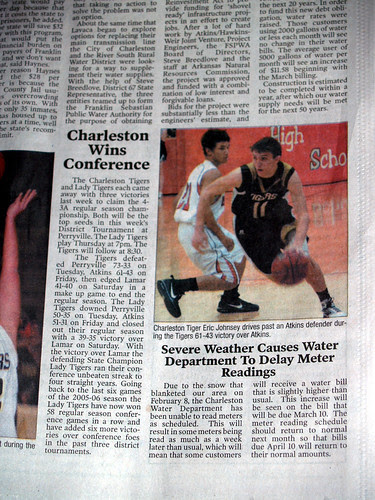 And it is cool that the picture they chose includes my cousin as well.

On the way to Lamar, I drove over to Mt. Nebo State Park. While most of the snow in this area had already melted, I hoped there would be more snow on the mountain due to its higher elevation. And luckily, there was. White snow still sat on the steep sides of the mountain. The curvy road that heads up the mountain was flanked on all sides by snow that was still several inches deep. I drove over to the overlook at Sunset Point, which has some great views looking off to the west. The snow here still looked fresh - except where it had been messed up by people walking around using it for snow ball ammunition. I found one spot along the bluff that had some clean snow, and got a shot of the view looking of towards another distant snowy mountain. 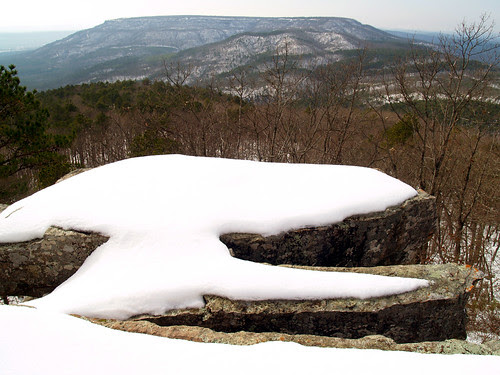 Posted by Cormackphotos at 10:05 PM