With full stomachs we drove north from Jasper, turning off onto the dirt road that leads to the Erbie put-in at the Buffalo National River. I had never been through Erbie before, so I wasn’t sure what to expect. But we were off to find a waterfall, in the slim chance that it would actually be running. Luckily the dirt road was in good shape, and no damage was made to the new car (besides getting it dusty).

The waterfall we were searching for was Liles Falls. It’s located just a short hike from the road, so we parked and bushwhacked our way past the small creek that makes the falls. The creek had just a tiny bit of water in it, and after a few minutes we finally made it to the falls. There was some water, a tiny trickle tumbling down over the bluff. It was an impressive area though, it would surely be awesome when there is water flowing through. We filed it away for a future visit, and walked back to the car.

We drove further down the dirt road, going deeper into the woods. We stopped at this one neat old barn, tucked away in the trees. 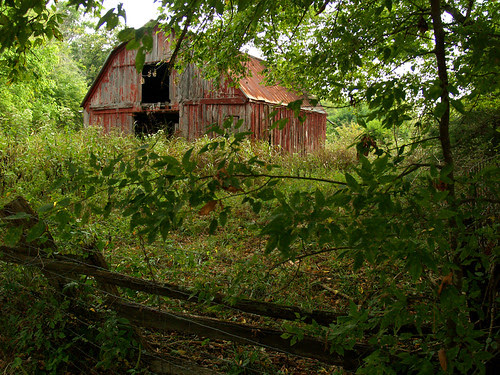 After a few more miles of driving we made it to the river access. It was surprisingly empty for a Saturday, with no other people there either on shore or on the river (well a park ranger did drive by). We walked around some on the banks, looking for something to get pictures of. The river at Erbie is wide and lazy, with some small bluffs rising over it. I wasn’t impressed with the pictures I got, so we got back in the car and explored the camping area there. It’s set in a huge field, and looked like a nice and quiet place. There were just a few tents nestled in the grass…

Back on the dirt road, we saw a sign for a “Historic Area.” Hmmm, what could that be? So we followed the dirt road further along, finally reaching an awesome spot. It was the Parker-Hickman Farmstead (of course a place in the Ozarks would be called Hickman). The farmstead is a collection old buildings, including a well-preserved two story house, several barns and even an outhouse. This is the view from beside the largest of the barns, looking back over at the farmhouse. 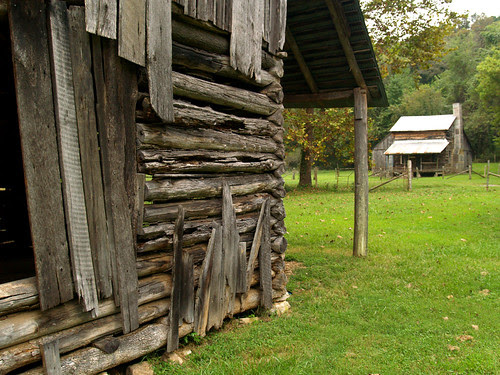 Man, it was awesome! In the woods next to the buildings were tons of wildflowers, spilling out through the old fence line. 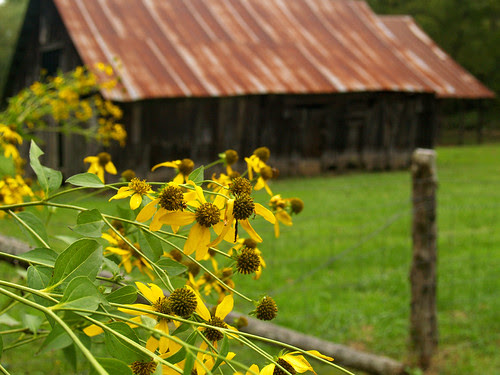 An old road took off from the farmstead, heading into the deep woods beyond. A sign said that it led to a cemetery. 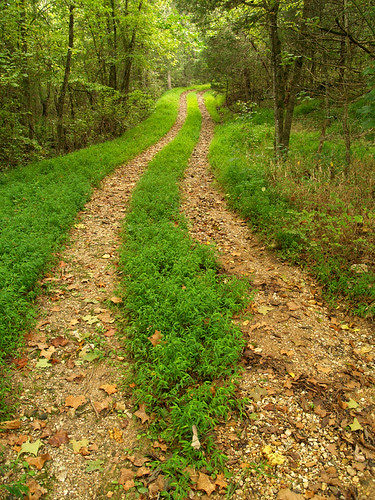 We nearly went down there, but it would have been a 2 mile hike there and back, so we left that for another day. Anyways, we had more places to explore at the farmstead.

The old house is well-kept and in good shape. People lived here until as late as 1978. While not the fanciest house around, it’s easy to see why people would want to live there. 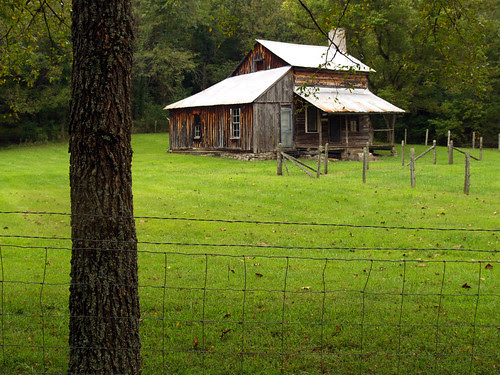 The National Park Service says that "the Parker-Hickman home is one of the oldest structures standing in the Buffalo National River. In the late 1830s, Alvin Parker and his brother Greenberry arrived from Tennessee and built a home here using the nearby red cedar trees. Joining the hand-hewed logs with half dovetail notches, the Parkers crafted one of the finest log houses in the Buffalo River valley."

"Over the years, later owners built additions to the original log house. The last owners - the J.D. Hickman family occupied this farm from 1912 to 1978 and constructed most of the outbuildings visible today."

This is the view from the front porch. Looks pretty relaxing, right? It makes me want to get a beer and a rocking chair and sit for a few hours enjoying the view. The front porch was a lot better than the back porch too, which had a hornet’s nest. 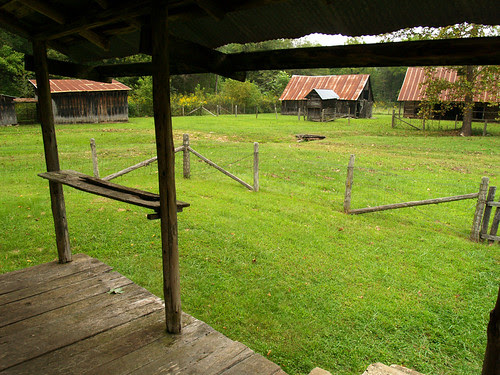 The Park Service lets you go inside the building and look around. It’s really cool, though somewhat creepy. In one room, you could see layers of old newspapers, magazines and wallpapers that are peeling back from the walls and ceiling. 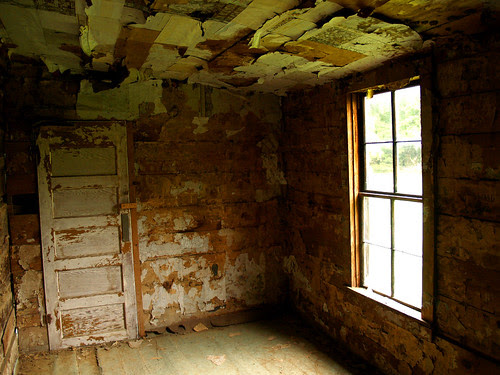 Back in the olden days, papers like this were stuck on the wall as a form of insulation. In this room you can examine the layers here, like an archaeologist. The top layers look like modern wallpaper, but further and further down you go it reaches the old magazines and newspapers. Here is part of an old comic strip, hanging up on the wall. 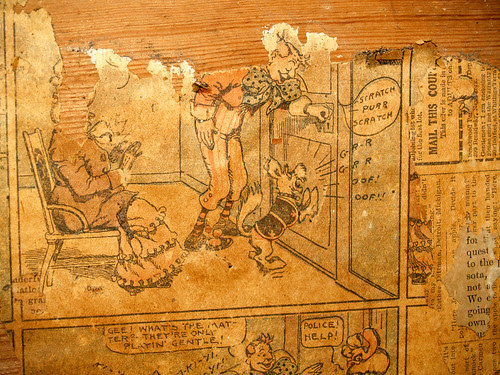 I wish I had more of the comic strip, since I'm interested to see what happens next. Why did they need the police? I thought it was pretty cool - one of most intriguing comic strips I've seen lately (well except for Garfield Minus Garfield).

We searched for a date on one of the papers, but couldn’t find one.

And a view looking back out at the barns… 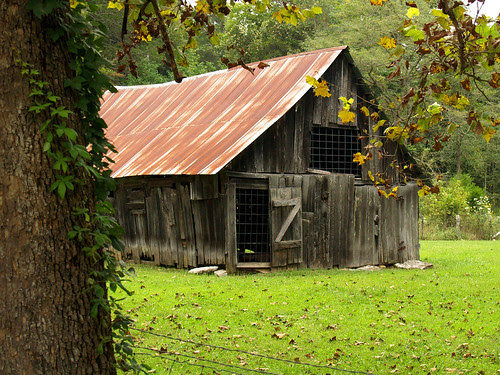 And one more. This is a beautiful place, hopefully we can go back when the trees are changing color. 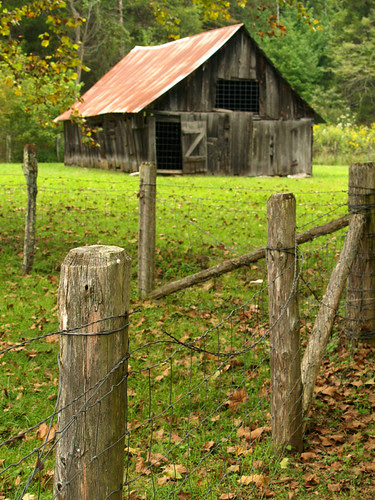 The dirt road went a bit further, heading right up to the Buffalo River. We went out to take a few shots, including this one of a hay bale nearly lost in some tall grass. 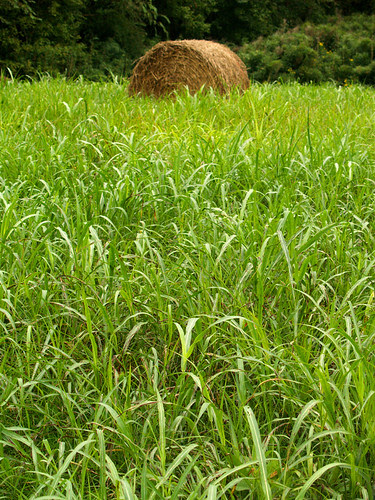 After that we drove back the way we came, eventually heading back onto Hwy. 7. From there we decided to make a quick stop at another awesome spot along the Buffalo River – Boxley Valley.
Posted by Cormackphotos at 10:28 PM