Regretfully, we drove away from Erbie. I’m still impressed by how cool it was, and definitely can’t wait to get back up there. Based on our short visit there, Erbie shoots up to one of my top three coolest places along the Buffalo River.

But Zack and I were heading off towards the coolest spot along the Buffalo River – Boxley Valley. It is a great spot, with Hawksbill Crag on one end and Lost Valley on the other. In between are a huge assortment of old barns and homes, with vast fields, swans and elk all in between. We drove through the valley, past cars parked alongside the road as their drivers sought out the elk. We made our first stop at this old barn, situated at the opposite end of a field. It was a bit hazy out that day, but a light fog appeared over the hills. 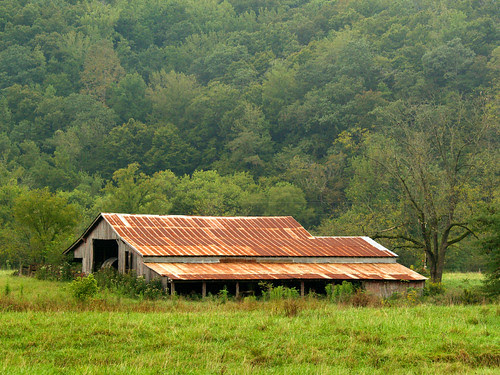 Like the rest of the Ozarks, Boxley Valley was covered with wildflowers. These flowers grew along the fence line by the side of the road. It may have been wading through the tall grass here that I ended up getting mixed up with some poison ivy. 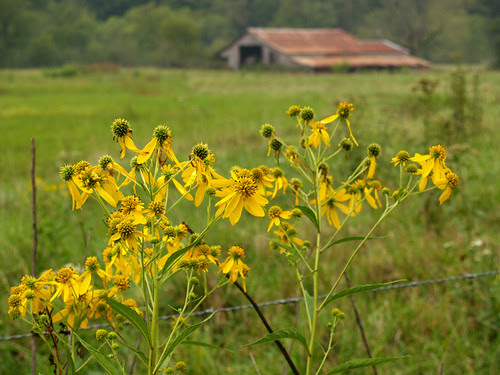 This is the view of the main road through Boxley. Traffic was light that day – most people were on the other side of the valley trying to see the elk, probably. 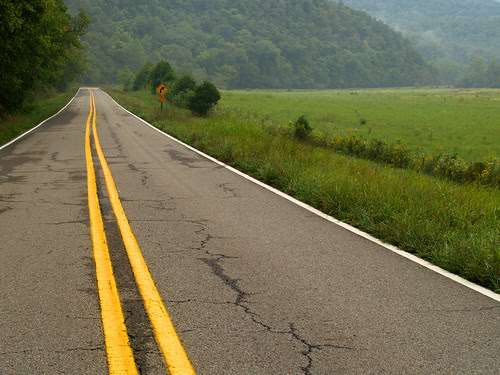 We drove a bit further down to a small parking area that is the trailhead for the 75-mile Buffalo River Trail. There is also the remains of an old house, some sort of old cellar (I think?) and an old barn. It is right next to a huge field that had some scattered hay bales laying around. 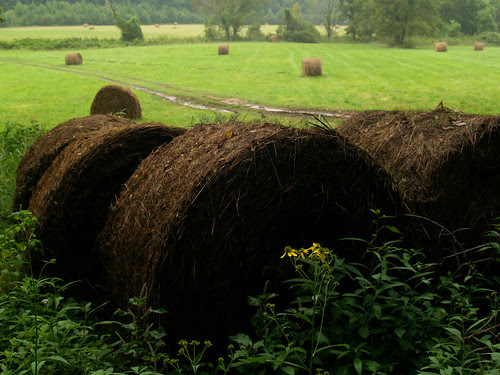 This was just further down the fence, which had a little spot of damage. There were a lot of huge spiders out here - orb weaver spiders had set up webs all along the fence. When I first saw one, I said something like “Woah that spider is huge.” And then Zack said, “yeah, and so is the one right over your head.” I might have made a little girlie scream after that. 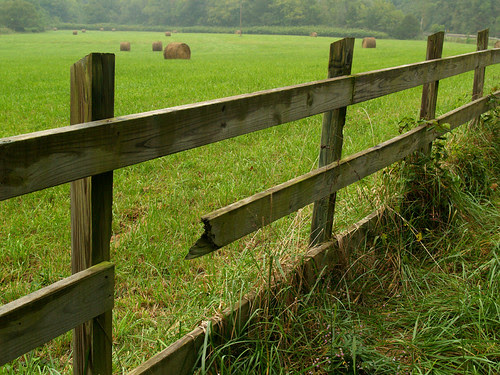 We drove further down to the old Boxley Valley Baptist Church and walked around the historic church and cemetery. There is a dirt road that runs off past the church, further back into a field at the far end of the valley. “Where do you think that goes?” we wondered, so we took the Vibe down it as far as we could. Which wasn’t far, there was a sign saying that we were entering private property. But there were several large orb weaver spiders here as well, all of the lined up nearly side by side along the fence. 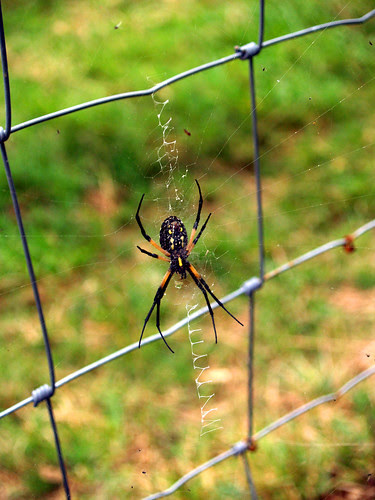 They might have been guard-spiders, making sure that we didn’t trespass too far. I wanted to see where that road went, but I just settled on getting this shot of the road curving away past a distant barn and out of sight. 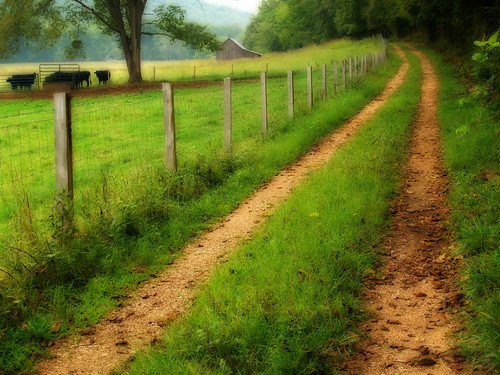 And one last view of a spider, one of many along the side of that road: 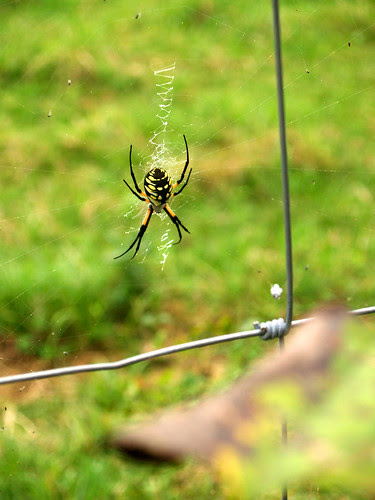 Across the main road from the church is a neat little series of old barns, so we pulled over for a few more shots. Both Zack and I went across the street to get a shot of the old church… 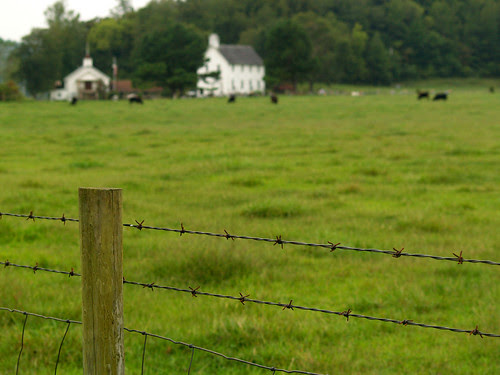 And one of the old barns – it’s amazing at how many different types of barns there are in Boxley. I like this one because it looks like it was built into the side of the hill. 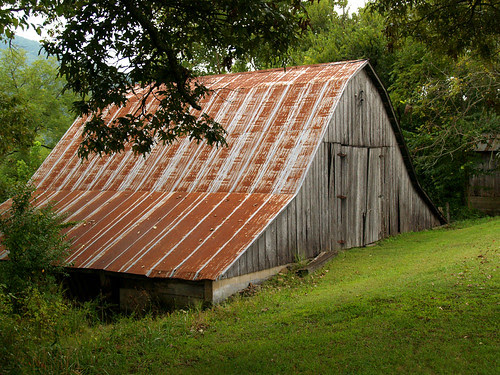 We drove further on, hoping to see the trumpeter swans in the Mill Pond. They were there, but sitting on the far shore next to some tall grass. We couldn’t really see them from the road. But we stopped at an old house by the pond, and went around to see if the swans were visible. They were, but I was more interested in this barn. 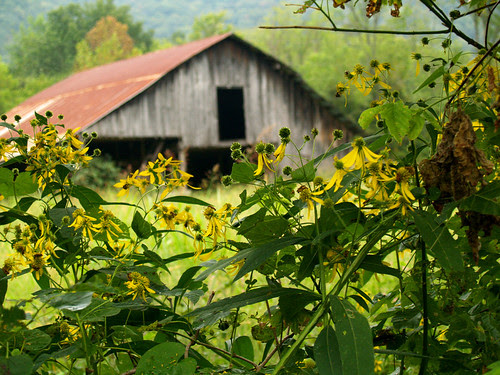 I was taking pictures for a few minutes before realizing that the flowers were covered with some sort of bug, which I thought were bees. I’m happy they didn’t seem to mind me standing there.

The area around the barn is overgrown, with thick grass covering and obscuring everything except for this solitary old cattle trough. 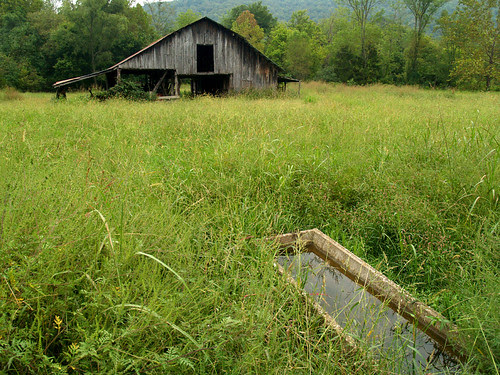 And the back side of the barn, which from here looks like it’s packed with hay. 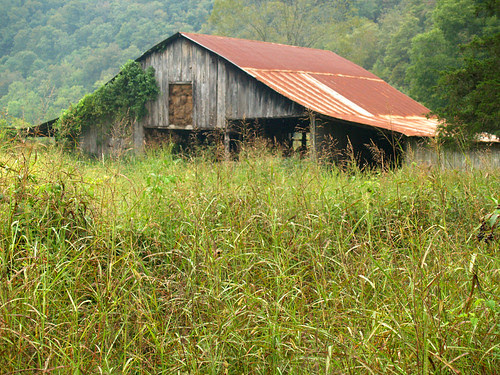 From here we drove over to the Beechwood Church and Cemetery, a little hidden spot that sits right off of the road to Lost Valley. This is a neat place, but there seemed to be something going on at the church when we pulled up to take pictures. Not meaning to bother anyone there, we went out to take some pictures. This is the dirt road that leads up to the church. 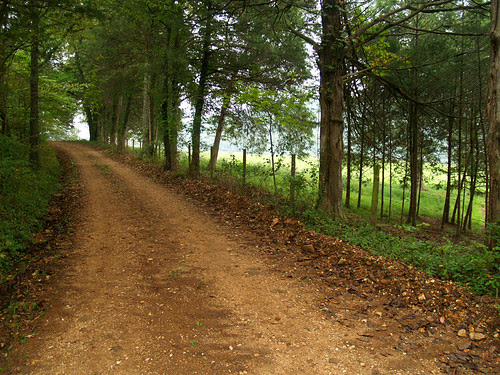 The church and cemetery overlook a large field, which was beginning to get a tiny tinge of fog drifting about. 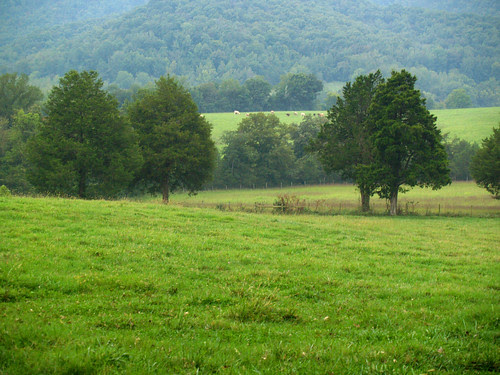 And another neat barn, which was one of our last stops. 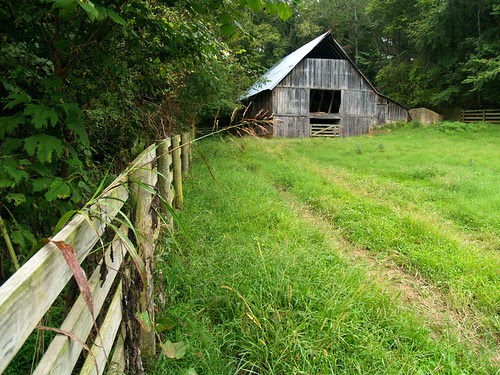 And that was about it for the day. We made a few more stops but my pictures didn't turn out, and soon we were driving back home. It was a good day for photography, even if it wasn't full of waterfalls...
Posted by Cormackphotos at 11:26 PM

Wow, Brian, that place is amazing. When you go back for fall colors take me with you?

Thanks Windy - this place is a photographer's paradise!