Just two weeks after driving down to Dallas for a soccer game, we made the five hour pilgrammage for another game. This time we actually had time to do some touristy-stuff there, visiting a few sites other than Pizza Hut Park.

On Saturday morning we paid a visit to the Sixth Floor Museum, which sits in the Texas School Book Depository. It is an interesting museum, though a depressing way to start the day. After looking at all the exhibits, we had a look around Dealey Plaza. This part of Dallas seems to attract a few crazy people. One of the last times I was there, someone was selling pillow cases with Lee Harvey Oswald's face on it. This time, a large group of people were protesting just across the street from the grassy knoll. Many of them were wearing the Guy Fawkes masks from "V for Vandetta," and holding up signs at the traffic driving by. One of the signs said "Google Disconnect," which made us wonder if they were protesting against Google. It turns out they weren't, they were protesting against Scientology.

But this is a view looking out from Dealey Plaza, towards the old courthouse: 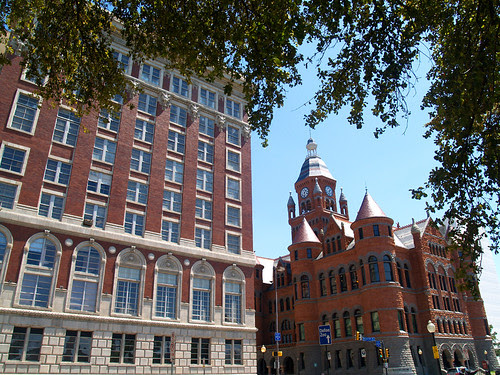 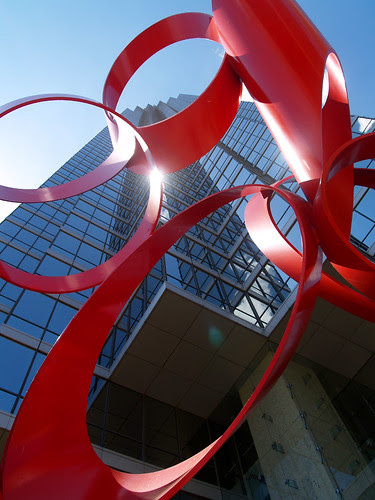 The security guard said that there was an ATM in a lobby a few blocks away, so we made our way in that direction. On the way, I stopped and got this view of a building along Main Street... 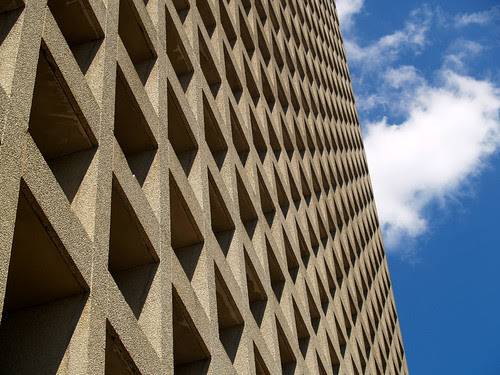 We made it to the building that has an ATM in the lobby, but of course, the lobby doors were locked.

From there we gave up and walked to the West End district for lunch, and then went to the Dallas World Aquarium. The aquarium is a neat place, but a bit expensive - $20 to get in! 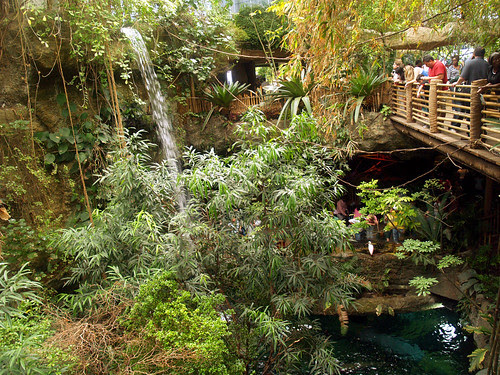 While expensive to get into, it is a cool place. This was taken in an area that recreates a rainforest, and features lots of tropical birds and monkeys. In some ways it seems like it more of a small zoo than an aquarium, but at $20 to get in they should at least let people take home a monkey or shark or something.

In the aquarium, next to a small food court, was a sloth. It was surrounded by people trying to get pictures of it. It wasn't bothered, thanks to this sign: 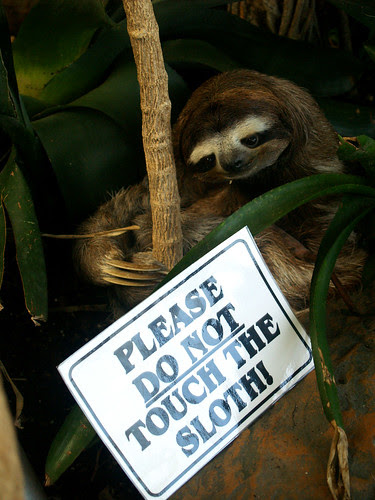 There was an aquarium worker (or the "sloth whisperer" as his nametag said), making sure no one actually touched the sloth. One of my friends asked if the sloth minded being the center of attention like this, and he said that sloths can barely see a few feet in front of them, and don't have a good sense of smell, so he probably didn't even realize he was surrounded by a large group of people... 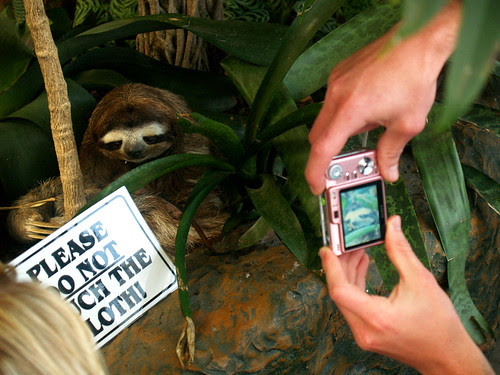 Along with the sloth, the aquarium also had some ducks.. 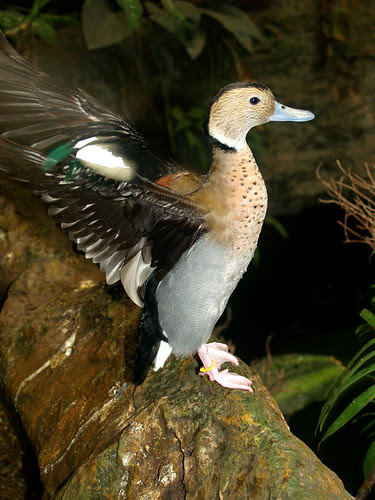 And some black-footed penguins... 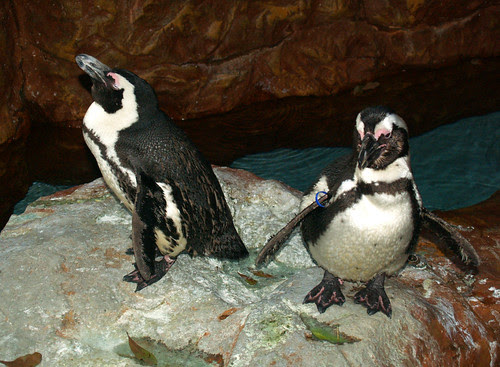 The actual aquarium bit is cool, they have sharks and all sorts of bizarre fish there. It is also neat how the aquarium was built, and it is worth visiting (even at $20 a person).

After the aquarium we headed up towards the soccer stadium in Frisco. After getting stuck in traffic for awhile, we finally made it there in time. Since this game was being played at night, I decided that I wouldn't try to take many pictures and instead just sit back and watch the game. The game was against the New York Red Bulls. Just under a minute into the game, Dallas would score the first goal. According to the write-up on MLSnet.com:
"Just 51 seconds in, Alvarez netted his second goal of the season and the second-fastest in club history to give FCD an early 1-0 edge. FC Dallas controlled the ball from the kickoff, and Andre Rocha took a pass about 25 yards from the Red Bulls box. He then sent in a great cross and Alvarez, who found some room in between New York's Chris Leitch and Seth Stammler, got his head on the end of it from about 15 yards out to beat New York goalkeeper Jon Conway."

Here is a shot of the crowd celebrating after the goal: 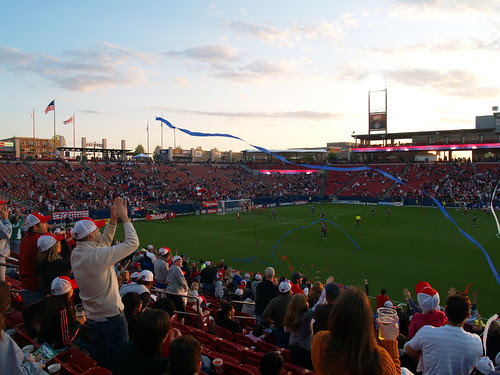 It was a good night for the game, just a bit chilly. The sun began to set and I regretted that I accidently left my sunglasses in Arkansas: 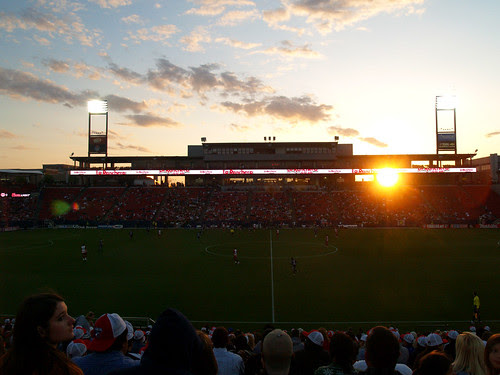 As it got darker, the photographer in me began to kick in. I hoped there might be a nice sunset over the stadium to get some good shots of. The sunset never really developed, but here is a shot of dusk settling in over Pizza Hut Park: 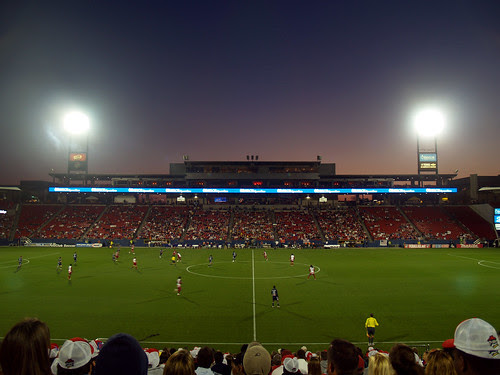 And a panoramic view, put together with five shots:

In the second half, Dallas scored again... The goal was scored by Kenny Cooper, and according to MLSnet:
Cooper's goal, his third of the year, came in the 66th. Adrian Serioux sent a long ball that traveled nearly 50 yards before the Dallas native brought it down and chipped it over Conway's head. FCD is now 14-0-3 all-time when Cooper scores.

Dallas won the game, 2-0. We headed back home on Sunday, and I'm not sure when we'll be able to make it down there. With gas prices rising, it might be awhile until we make another pilgrimmage to Dallas.
Posted by Cormackphotos at 5:20 AM