Crazy times at the Junction Bridge

Little Rock seems to love pedestrian bridges. Along with the Big Dam Bridge, a new pedestrian bridge will be opening up in the next few weeks. The Junction Bridge, a railroad bridge built in the 1880's, is nearly finished being rennovated. It will be a great place when opened, the views of the skyline should be awesome from there.

The new lights on the bridge were recently turned on, so I headed downtown one night last week to get a shot of the bridge with the city skyline in the background. There were just a few flaws to my plan, one being that the bridge is still a construction site so that a large black safety net was hung on the bridge. The other was that I was target for a crazy person. 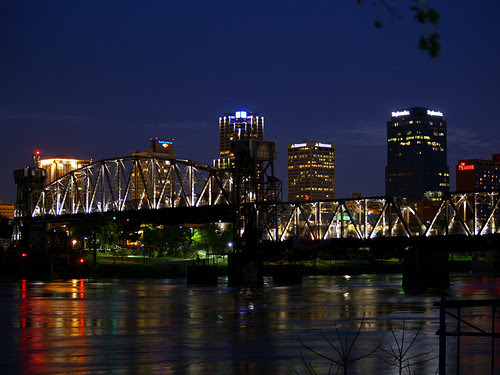 I got there early and had to wait for it to get dark. I scouted the area, looking for a good place to get a shot, then set everything up and waited.

While I stood out there next to the camera, a car drove up and parked about 30 feet away. The car just sat there, and I could see that the driver was just sitting there. This got me a bit worried.

After sitting there for awhile, the guy in the car got out and started walking towards me. Oh crap, I thought. What now?

The guy walked up and asked what I was taking a picture of. I thought that he was just smoking a cigarette when he walked up, but realized I was wrong. He was smoking a joint.

He said he was curious as to what I was doing, taking pictures out there. He wondered if I was taking pictures of the "May" sign on the bridge. The May sign is there because the company doing the rennovation is named May. He said that he thought the sign was there to promote Memphis In May. I wasn't sure what to say. Of course, it seems obvious that there wouldn't be a sign on a bridge in Little Rock that would promote Memphis In May, since that is held in Memphis and not Little Rock. I lied and told him I didn't know what the sign was there for, and he looked at me like I was an idiot.

"Then why are you taking a picture of it?" he asked.

I tried to explain that I was trying to take a picture of the bridge and the skyline at sunset. He then asked if I spent a lot of time studying when the sunset occurred.

No, I could honestly say, I don't normally look at that. I admitted that I thought it might set earlier, since I had gone out there only to wait longer than I expected. He said that Channel 7 News said it would set at this time, as if I was ignorant for not knowing that.

I said I didn't watch the news today, so I missed that. He then added, "well I don't watch the f--ken news anways, f--k them."

Which made me wonder how he'd know when Channel 7 would know when the sunset would be, if he didn't watch the news. But I figured asking that might make him mad, which might make him stab me or something, so I didn't say anything.

At this point I should have walked to my car and driven away.

But the crazy guy began to ask me all sorts of crazy questions. He asked about the crane above the new building being built in Little Rock. "Where did they get that crane?" Not knowing where cranes arrive from, I told him I didn't know.

He said, "well it probably didn't come from Arkansas! They must have brought it in from Memphis or St. Louis."

"Or Dallas?" I added, for some odd reason, adding on the nearest large city. I don't know why I was trying to make conversation with him.

"Dallas!" he said, "F--k Dallas!" He then railed on how Dallas sucks and that Texas is filled with horrible towns filled with "cultural centers" and that the only good places in Texas were Austin and San Antonio. I was glad I wasn't wearing a FC Dallas t-shirt that day.

"No, I don't have any on me." Which was truthful, I don't usually carry a keg with me everywhere I go. He gave me another look like I was the craziest person in the world, and asked "why not? There are plenty of places nearby that sell beer!" and motioned his hand towards the bars on Main Street in Argenta.

He said that he wanted a beer, so he was going to head across the river to a bar in the River Market area. I was more than welcome to join him. He even asked what kind of beer I'd like. I told him that I had plans tonight and couldn't make it out there.

"No, f--k those plans, get a beer. You're young, grab a beer!" I told him that I'd meet him for a beer after I finished taking pictures, so he'd leave. Which he did, after asking me what kind of beer I'd like, either in a pitcher or in a glass.

I, of course, didn't head down there. But did wonder if he sat watching a glass of beer get warm while he waited for me to show up.

Sadly, I didn't make this up...But this was really a bizarre encounter, the only time in many trips to downtown that anything like this has happened.

But being left alone I was able to take more pictures. The bridge will be awesome when it's done (it will be open for Riverfest on Memorial Day weekend). 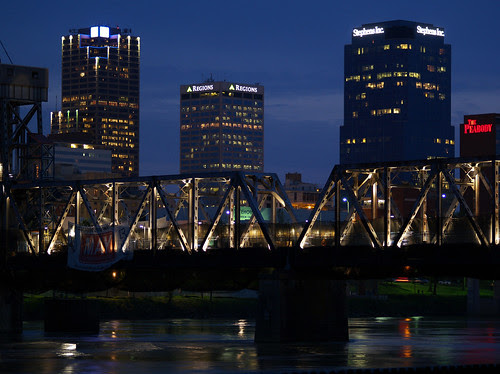 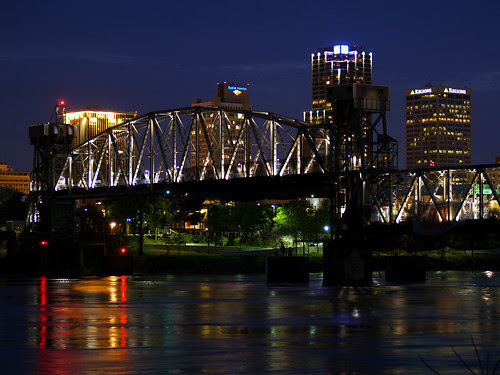 After looking around the bridge one last time, I went over to Riverfront Park to get a shot of the skyline reflected in the river. I was too late to get any color in the sky, but luckily there were no crazy people out bothering people. Just a few people walking the trail and enjoying the view... 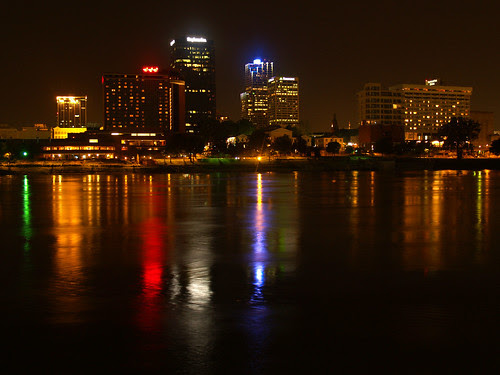 Posted by Cormackphotos at 1:17 AM

I Love the twilight shots--wish you could post em a little larger to see all the detail, but I suppose you might wait anyway until the net is down...

Gotta love lonely crazy people though I must say I'm a bit disappointed that you didn't have a beer or two in your camera bag...don't you know artists need to be on something at all times???!!!

He probably eventually finished your beer and thought to himself "F--K that camera guy! I'm gonna come back down here and teach him a lesson about cranes and fists!:

I'd like to put larger pictures on here, but the formatting is odd on this site so if I post larger it cuts off some of the shot. But people are always more than welcome to click on the shots, which will take them to my Flickr site...

Good point though, I will exchange my camera bag for a cooler so I can carry an emergency 6-pack with me!