The last time we went to New Orleans, back in 2017, we travelled with Jonah. While there were some great family-friendly things to see and do there, New Orleans isn't really the city you want to visit with a toddler. So last weekend we made another visit, but this time left Jonah in the care of his Grandparents in Searcy. And while we missed having him with us, it was nice to get to explore the city without having to cater to the whims of a toddler or have to watch Paw Patrol for any reason.

We stayed in a hotel in the French Quarter that was right by Jackson Square, so we ended up passing by there several times during our trip. Jackson Square is the historic heart of the city. Shortly after the city was founded in 1718, the square was established as the Place d'Armes. It quickly rose in prominence as the center of the young city, and some of the most historic buildings in the city are situated around the square. The most prominent and famous of those buildings is the St. Louis Cathedral. 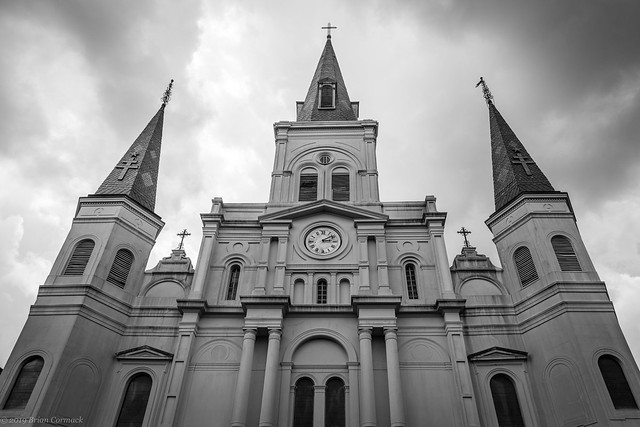 The first church here was built in 1718, which was replaced with a nicer building in 1727. But that building, along with most of New Orleans, was destroyed by a massive fire in 1788. The church was rebuilt by 1794, but after a few decades the church decided it needed to do a renovation and expansion. So most of the old church was torn down and replaced with the current cathedral in 1850. 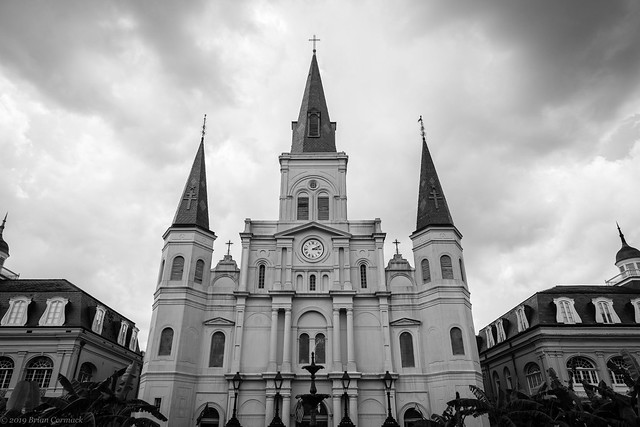 And the view looking inside the cathedral, which was crowded with a bunch of people taking pictures (and probably enjoying the air conditioning). 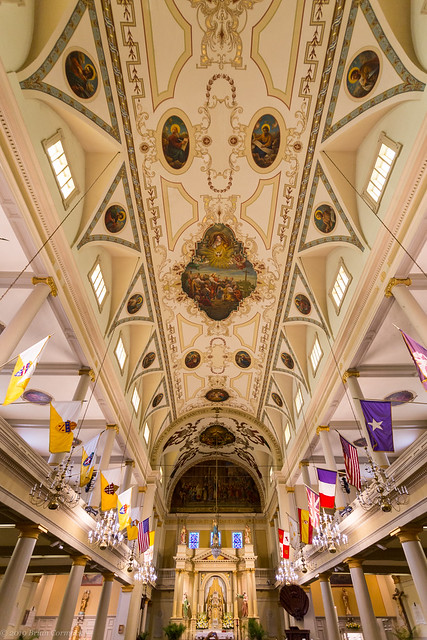 Jackson Square is named after Andrew Jackson, who successfully defended the city during the War of 1812. The square is dominated by a large of statue of Jackson, although that statue is now a little controversial because of some of the awful things Jackson did while he was President (like the Trail of Tears). There's no telling if the pigeons have any opinions on Jackson or his legacy, but it seems like they do enjoy pooping on his statue's hat. 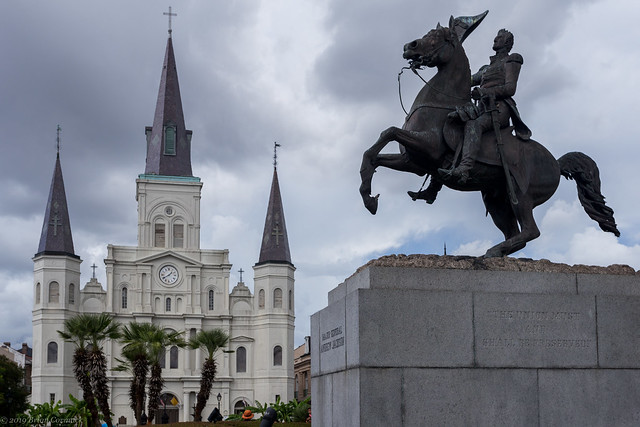 Among the other historic buildings overlooking Jackson Square is the Cabildo, which was the New Orleans' old City Hall and is the place where the Louisiana Purchase was signed in 1803. There is also the old Pontalba Buildings, which were built in the 1840s and contain some of the oldest continuously-rented apartments in the US. We did a cocktail tour, and our guide walked us by here. He said the rents here were only about $1,500 a month. Which seems like a steal until you realize the buildings have old plumbing, no insulation and no parking. Plus you get to hear all the music and commotion from all the drunk tourists and bachelorette parties going on all day. But I don't know, $1,500 sounds like a good deal. I used to pay $700 for a one bedroom apartment in North Little Rock that also had unreliable plumbing, weird neighbors and awful parking. This is the view of the balconies on one of the Pontalba Buildings. 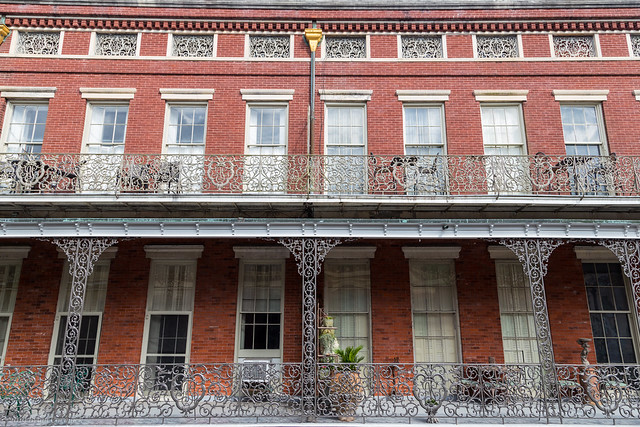 This was taken from the balcony of Muriel's, a restaurant that had this view overlooking the Pontalba Building and Jackson Square. This was a great spot, and it's one that we visited several times during our visit to New Orleans. The only problem is that they didn't offer any service to the balcony, so you had to go down the stairs any time you wanted a new drink (a small price to pay in order to have that view). But the stairs go by a small table that always had some wine and bread sitting out, which turns out to be the table reserved for the ghost that haunts the building. 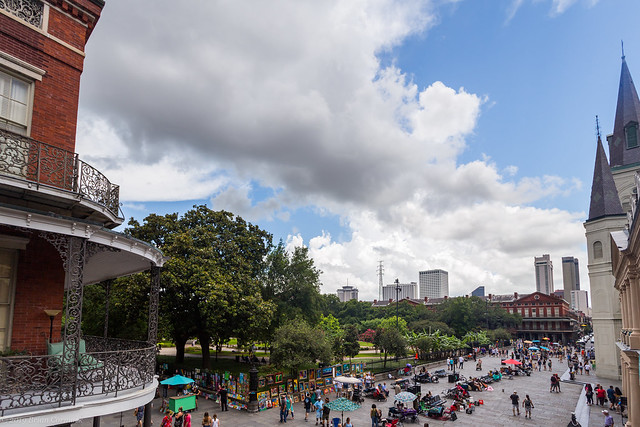 Another shot of St. Louis Cathedral, when it was bright and sunny out. 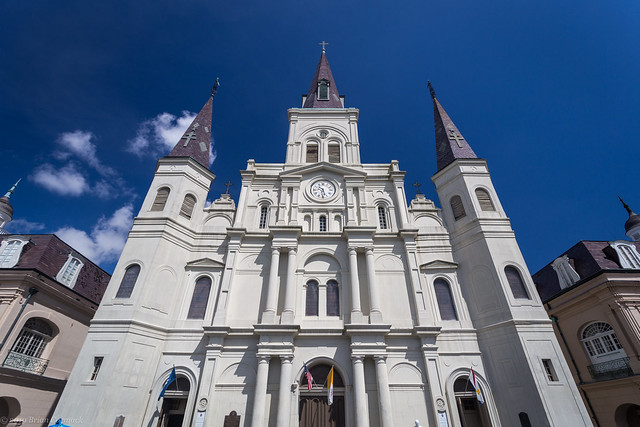 I went by the Square one night after dark, and tried to get a few shots. I didn't bring a tripod with me on this trip, so I had to awkwardly place the camera atop an electrical box along the fence to get this picture. The street in front of the Square was busy with traffic and tourists roaming about. 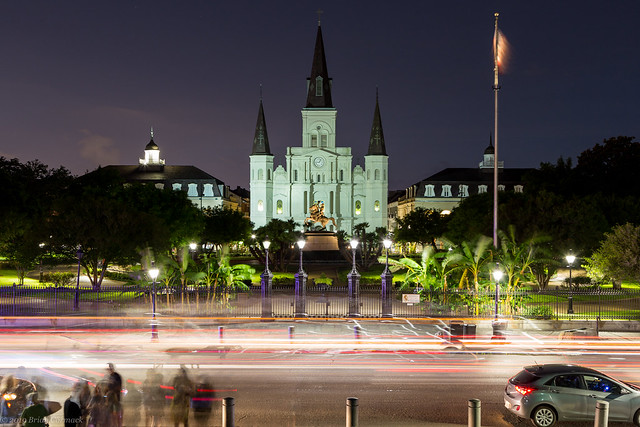 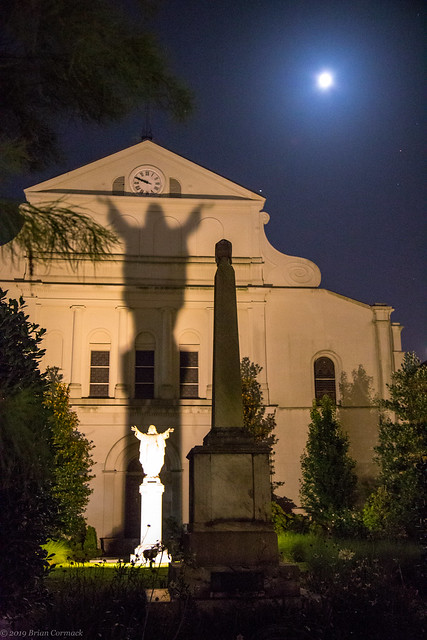