My most popular picture

I recently renewed by Pro membership to Flickr (which is "almost certainly the best online photo management and sharing application in the world"). I've been a member since way back in 2004, and have posted over 5,000 photos to the site. So it's interesting (to me, at least) to see which photos have been singled out by the internet people over the years. I do have one photo, with nearly 30,000 views, which is by far my most popular picture online.

What is it? Well, I'd like to say that it is a shot of some unknown waterfall that I found one day while out bushwhacking through the wilderness. Perhaps a thundering and tall waterfall, taken with the optimal weather and water conditions. Say a shot where a rainbow popped out over the falls, while a bald eagle and an ivory billed woodpecker both flew in and perched next to the falls. But alas, my most popular photo on Flickr is nothing like that at all.

In fact, my most popular photo online is, in fact, a picture of.... 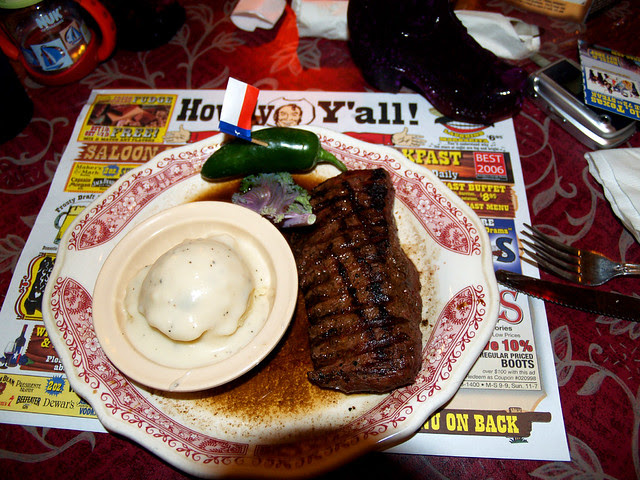 As of this writing, this shot has a grand total of 28,834 views. It was taken in 2007, during a road trip out to Arizona. On the way back, we stopped at the Big Texan Steak Ranch in Amarillo. I ordered an 8 ounce sirloin (which is paltry compared to the 82 ounce steak you can get there, which is free if eaten in under an hour). I posted the shot to Flickr, and it was eventually linked in a Yahoo forum. The question asked in the forum is "How big is an 8 oz. steak?," and so now I get anywhere between 30 to 60 views a day on it.

The second most viewed photo on Flickr, with a total of 8,905 views, is of a waterfall - Glory Hole Falls. Although looking at the stats on Flickr, it does seem like people are finding the shot while doing research on glory holes.  But not the waterfall kind. But thanks for looking anyways!
Posted by Cormackphotos at 9:59 PM