Last weekend I made a quick trip up to Kansas City with my brother. Our main reason for going was a soccer game - a friendly match between the Kansas City Wizards and Manchester United. It was just an exhibition match, there wasn't any trophy or championship on the line. But a huge crowd showed up for the match at Arrowhead Stadium - over 55,000 people. It was the largest crowd for a soccer match at Arrowhead, and the largest crowd ever for a soccer game in Kansas City. That will change, hopefully, when the USA gets the chance to host the World Cup (either 2018 or 2022).

Manchester United is considered to be most popular soccer team in the world. They have the highest home attendance average in Europe, and millions of fans across the globe. The Kansas City Wizards are one of the original clubs in Major League Soccer, and won the MLS Cup in 2000 and were runners-up in 2004. They'll be getting their own stadium next year.

I brought my camera to the game, but didn't try to bring in my zoom lens. I checked the stadium rules and saw that "professional" cameras weren't allowed. The definition of professional was that you couldn't have a detachable lens that extended over six inches. So all I could bring was my regular lens, which didn't allow for good shots of the field.

This is the view from our seats: 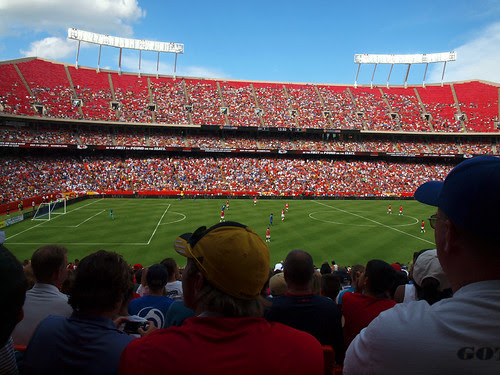 It turned out to be a pretty good game. Kansas City scored first, but then Manchester United tied it with a penalty kick. A few minutes later, Kansas City would get a second goal. The match would end 2-1. Here's a shot of the game-winning goal: 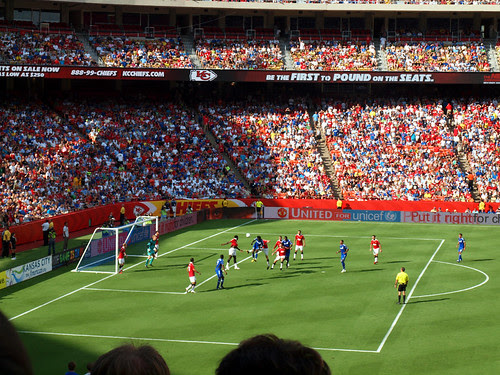 It was also nice that with over 55,000 people in attendance, there were very few vuvezelas present. Here are the highlights:


After the game we headed to our hotel, which was conveniently located in the Country Club Plaza area. This is a neat area, built in the 1920's as a shopping center. The streets were laid-out in an European style, and the architecture made to resemble that of Seville, Spain. After getting dinner, I got the camera and went to take a few pictures.

Just to the edge of the Plaza area is the J.C. Nichols Memorial Fountain. It's thought to be most photographed fountain in Kansas City. It is a neat spot, but unfortunately, the lights on the fountains were shut off the night I was there. 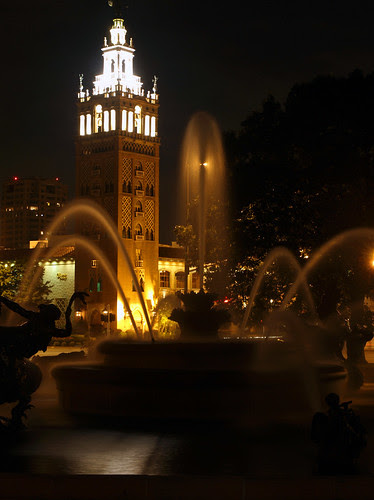 And one last shot from Kansas City. This is a view of the tallest building in the tower, which is a half-sized replica of the Giralda Tower in Seville. 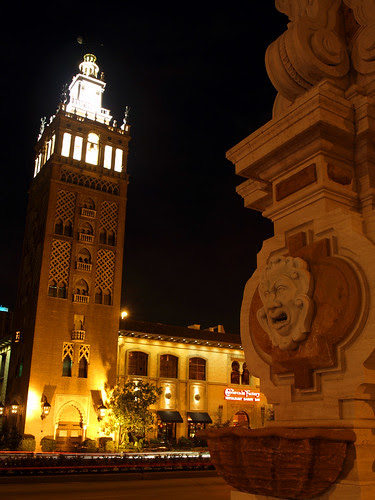 Posted by Cormackphotos at 9:55 PM