It had been awhile since I had gotten pictures of the Clinton Library in downtown Little Rock, so I decided to check in to see how things were going there. I made one visit on a Saturday night, but it looked like there was some sort of fancy shindig going on there that I was not invited to (a wedding reception, maybe?). There was a queue of folks in fancy clothes stretched out the door, right where I would be wanting to set up the camera. So I held off for a few days.

I finally made it back over on a night when the library was empty and quiet. It's hard to believe that it's been six years since the library opened. I remember standing in the rain at the opening in 2004, hoping to get a glimpse of Bono and the Edge. Amazingly, I was able to see them perform up-close (that's a story for another day). 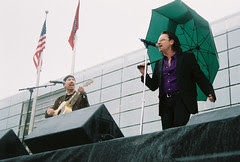 But it's hard to remember what this area looked like before the Clinton Library was built. Located just down the road from the thriving River Market district, this area was a perfect example of urban blight. The grounds of the library were home to a few old industrial buildings, which weren't something you would show off to out-of-state tourists. A homeless camp used to sit by the Rock Island Bridge, and its residents freely roamed the abandoned bridge.

But now the library sits on a vast plot of parkland, and the buildings themselves look neat when lit up at night. I took the camera out there on a warm night, and set up by one of the two fountains that flank the entrance. For some reason, about half the spotlights on the front of the building were turned off. So the glass on the front of the main building just reflected the cool blues of dusk. 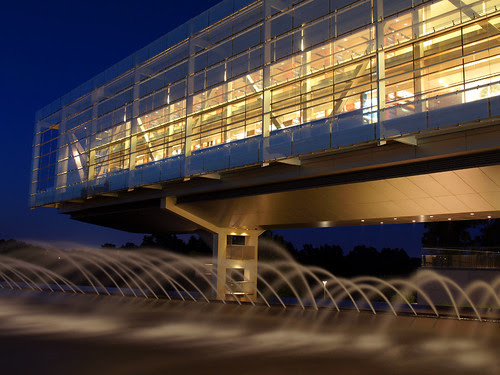 I moved over and found a spot under the library building itself, looking out towards the Rock Island Bridge. That old bridge was built over a century ago, and is in the process of being converted into a pedestrian bridge. It was renamed the Clinton Park bridge, but I kinda like the old name better. Posted by Cormackphotos at 9:23 PM

It is weird to think about LR before the Clinton Library. The only thing I really remember about the River Market before was Riverfest. I get sick of people talking about the library being ugly (okay it is far away), because it really has changed that area so much...and for the good!