It was dark when I drove into the campground at Lost Valley. I was surprised to find the campground quiet and relatively empty, there were just a few cars in the parking lot. This is one of the most popular spots along the Buffalo River, and I expected it to be packed.

I parked the car and went about getting my "campsite" prepared. I wasn't camping in the traditional sense. My plan was to camp in the car - by folding down the back seats of the Vibe in a make-shift tent. I brought along plenty of blankets and made a sort of nest in the back of the car. It wasn't as comfortable as I would have liked, but much easier than trying to put up a tent in the dark. The only problem was that, even with the back seats folded down, there wasn't quite enough space to stretch out completely. If the car was a few inches longer, or I was a few inches shorter, it would have worked out perfectly.

It was somewhat cool at the campground, so at first I decided to keep the windows rolled up in an effort to keep the bugs out. This resulted in the car getting stuffy in the muggy summer night. And it also resulted in the windows fogging up. I decided to roll down the windows, in order to let in a breeze. And also to prevent a wandering park ranger to see a car with foggy windows and think that something nefarious was going on in the Vibe. The cracked windows let in a nice breeze, and amazingly, very few visiting insects.

I had set the alarm clock on my cell phone to go off at 5:30 am, but instead woke up earlier to the morning chirps of some birds hanging out in the campground. After packing the sleeping gear in the back and putting the seats in their locked and upright positions, I set out to explore Boxley Valley. I had hoped that the valley would be covered in fog, and amazingly, my plan actually worked out. A thick blanket of fog covered the valley. 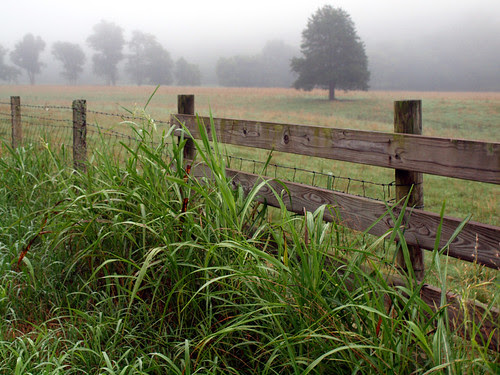 The Buffalo National River ranks as one of the most scenic places in the state, let alone this part of the country. And Boxley Valley is perhaps one of the most special areas along the Buffalo. Boxley Valley is a historic district, and it has a deep history. Native Americans are thought to have lived in or around this area for centuries. Settlers moved into the Boxley Valley and Buffalo River area around 1830. A few decades later, some Civil War fights occurred in Boxley Valley. Boxley quieted down after that, entering into a routine of farming in a remote stretch of land.

When the Buffalo River was established as the very first National River in 1972, the National Park Service wisely allowed the old residents of the valley to keep on maintaining their fields and farms. This preserved the old barns, homesteads, cemeteries and churches that had been in the old valley for over a century. A drive through the valley now showcases a way of life that was once prevalent in the Ozarks, but has now drifted away through the turbulent waters of history.

The buildings you now see in Boxley have stood for over two centuries. It is an amazing and unique display of history, all laid out on a short seven mile drive. Along with that history, you have vast displays of wildlife. Herds of elk call Boxley Valley home, along with a few trumpeter swans. I drove through the valley in an attempt to see the elk, but they weren't in any of the fields along the road.

I did see one elk, with a massive set of antlers, hanging out in a field near the old Boxley Valley Baptist Church. The bull elk was alone in the field, and wisely grew wary of me being nearby. The elk trotted off, heading off towards the nearby forest. I don't know why it would be scared of me. If an elk came charging at me with antlers like that, I'd probably crap my pants and then promptly pass out. 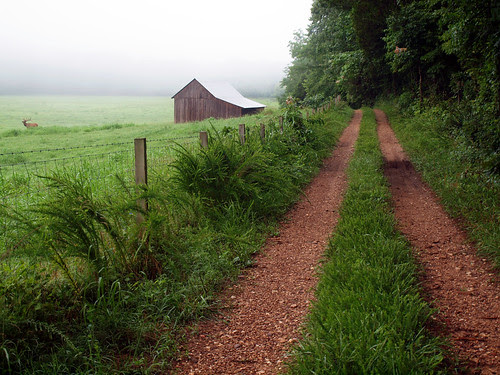 There is an amazing collection of old barns in Boxley Valley - there will be many more barn pictures coming up... 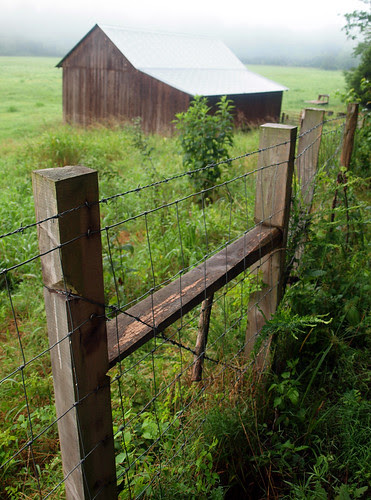 This is a shot of an old fence post, with all sorts of plants growing on it, with the old Boxley Valley Baptist Church in the distance. 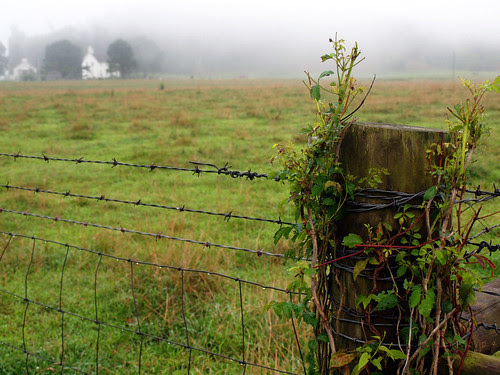 The old Boxley Baptist Church was built in 1899, but the church's history dates back to the 1830s. The church building also served as a school. A newer church was built next to the old church in the 1950s, but the old building still serves as a community center. 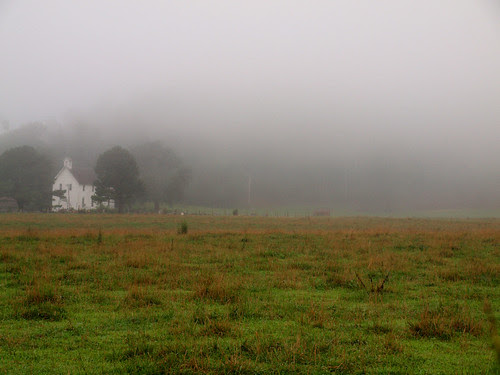 The fog was still thick has it hung over the valley, and I wished that I could stop time. There are so many neat old barns and buildings in Boxley. I felt like a kid in a candy store, and hoped that there was enough time to stop at all the sights along Boxley Valley before the fog finally lifted. 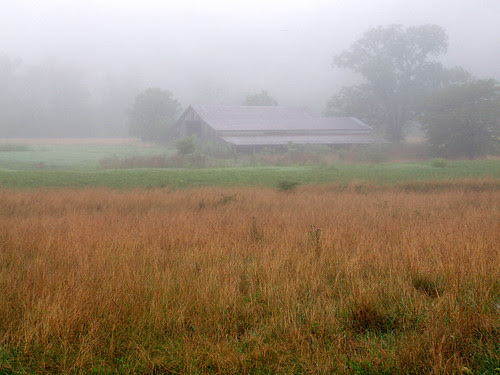 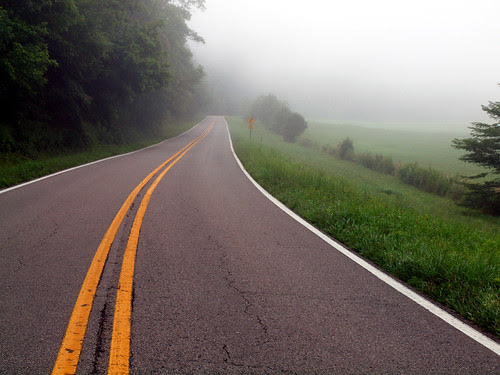 The trailhead for the Buffalo River trail sits next to a small parking area on the southern edge of Boxley Valley. Located across from the parking area are the remains of an old home, built in 1900. Tragically, the old home was burned by arsonists in 1990. All that remains are the foundation and the stump of a chimney. Just a short walk away is an old barn, built sometime in the 1920s. Here is a shot of a spider web, growing along the fence that lines the perimeter of the barn. 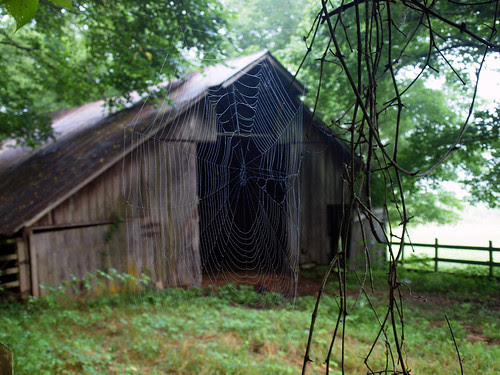 Spider webs would be an ever-present aspect of this trip to the Buffalo River. I would end up walking right in the middle of several large spider webs, which would result in the sticky webs wrapping my face like a veil. I felt a bit sorry for the spiders, who must have spent so much time constructing their webs. All that effort, just to have some dumb human stroll head-first through the middle of their handiwork. Sorry guys.

Here's another shot of the old barn, with summer growth overtaking the fence posts. 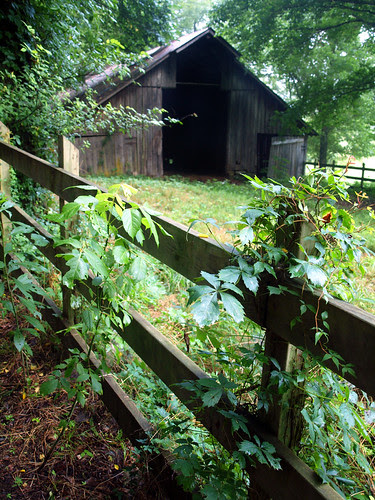 And another shot of the barn, framed by this old shed... 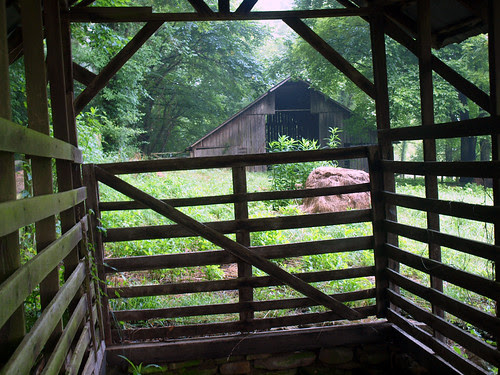 Next I drove over to the old Boxley mill, which is a bit hidden from the main road. Not too many people visit the mill, probably because of some confusion about it being on private or public land. I had heard, from a reputable expert on all things Boxley Valley, that the old mill was indeed on public land. The mill and the property around it are on public land, and in fact the National Park Service is restoring the old mill.

But when you head there, the gate to the mill is padlocked. There is a sign along the gate that says: "These Boxley Valley lands are leased. There is no public access to farm lands or farm buildings. Please respect this private use." There is a gate just next to the padlocked one, which had no warning sign posted. I went through that gate, not entirely sure if I was trespassing. There were many cows in the fields next to me, peering suspiciously at me as I passed. 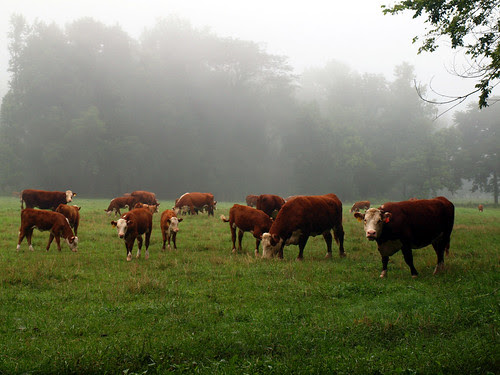 According to my Boxley Valley source, the area around the mill is open to the public. But "they" only offer tours of the mill on appointment. There was another gate leading to the mill, but it was padlocked as well. I ended up jumping the fence so I could a closer view. 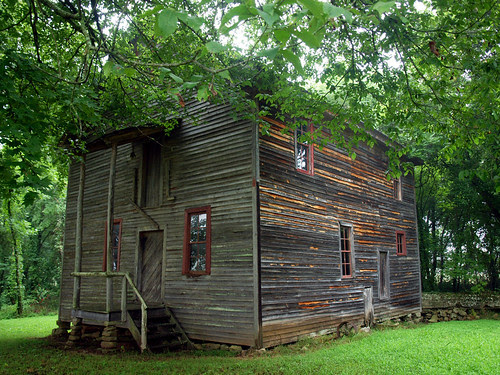 The Boxley mill was originally built circa 1840. It became known as the Villines Mill and then the Whiteley Mill. It was the site of a Civil War skirmish, known as the "Battle of Whiteley's Mill." The mill building that stands today was built in 1870. It was run by three generations of the Villines family, where people took corn in order to be ground to meal, or wheat for flour. Around 1950, the mill closed. 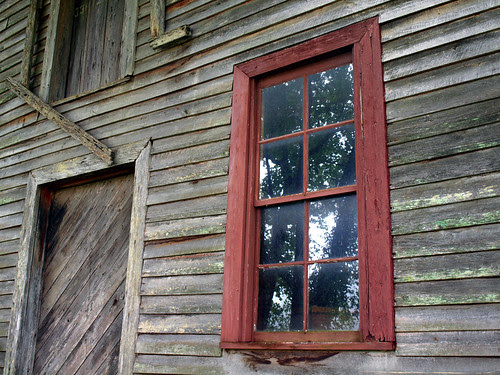 Apparently, much of the original equipment in the mill is still there. But now it sits empty and nearly forgotten. I was nervous being there, and hoped that I would not get in trouble for trespassing on lands that I should perhaps be allowed to visit. I didn't linger too long. 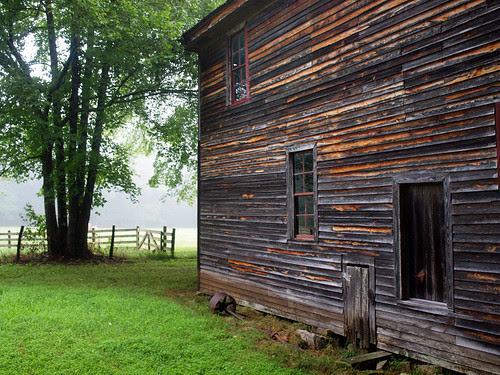 And a barn, located next to the Mill Pond. 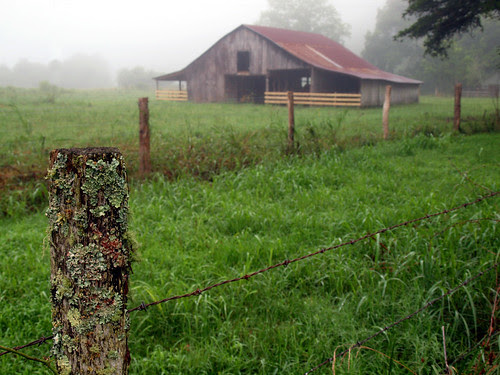 I drove over to the Ponca low-water bridge, just to see how high the water in the river was. The low-water bridge over the Buffalo is a local landmark. Construction on it first started in 1941, thanks to funding from the WPA. World War II halted the work, but it was completed by county workers in 1944. It's a narrow concrete bridge, but a popular gauge for local floaters to see if the river is good to set out canoes and kayaks. I headed out on the bridge with the camera and tripod, along with several people surveying the river. We watched as trailers moved in, with dozens of canoes attached. The water looked high and muddy to me, not something I'd want to float in. 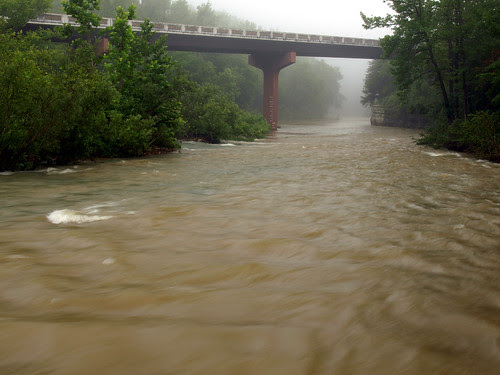 I got back in the car and drove up towards Lost Valley. Along the way is this old building, which may have once been an old school. 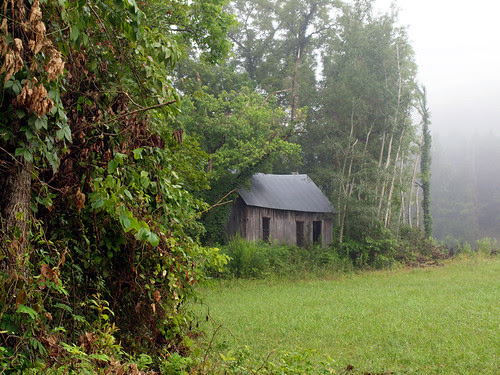 I got back on the main road, just as the sun was starting to break through the fog. I had gotten about two awesome hours of photography out of that fog, and I was sad to see it depart. The sun broke free, but the fog stubbornly held on, clinging to the top of the mountains. 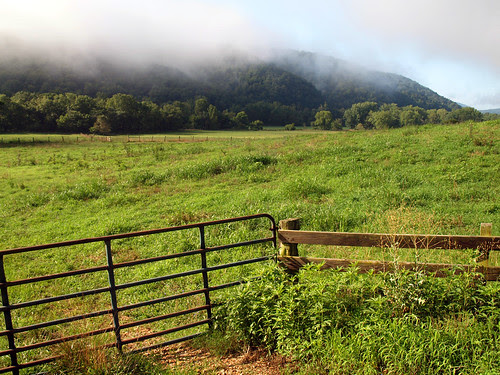 I left Boxley Valley and headed back over to the Steele Creek campground. There were a few lingering bits of fog and low clouds in the valley by Steele Creek, and I hoped to catch it before it burned off. 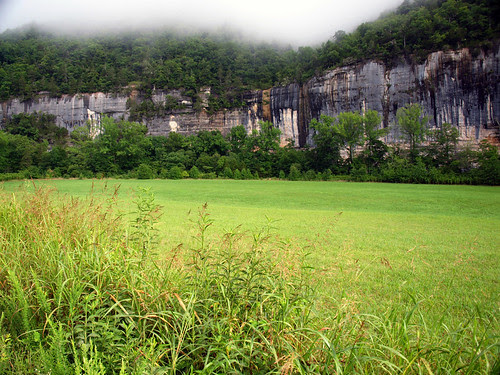 From there the sun was in it's full summer force. It was quickly getting hot and muggy again. I headed out, driving towards one other great spot along the Buffalo River...
Posted by Cormackphotos at 10:59 PM