Last Saturday morning I woke up early and met up with Matt Kennedy and Zack Andrews (and his girlfriend Caden) in Conway. Our destination that day was a little-known and probably seldom visited area in the Ozark National Forest called the Blue Hole. Not too many people know about this area – it isn’t listed in the main guidebooks, there are no signs for it, and there isn’t a trail. To get there involves driving down several miles of dirt roads, and then a bushwhack through the woods. But it’s definitely worth it. The Blue Hole area has two creeks that each have some spectacular waterfalls.

To get there, we drove north from Morrilton, eventually driving through the small town of Jerusalem. Now I wasn’t driving, and spent the drive in the backseat not paying attention to the directions. But we turned onto a muddy dirt road that quickly headed up a hillside that was shrouded with fog. Visibility was low, which made the narrow dirt road much more interesting. On one side was a steep drop-off, with the distant ground hidden beneath the foggy abyss. We turned onto another dirt road, and followed it for a bit before stopping to park. We continued to walk further down the dirt road, which became increasingly muddy. There were patches where the road was replaced with deep puddles, and the mud was the type where your foot would sink in halfway and the mud would clutch onto your shoe and try to steal it.

After reaching a camping area, it was time to bushwhack. It was very easy at first – it was a flat and easy walk through a pine forest that was free of any damage from last year’s ice storm. But soon we started heading down a steep hill, but at least it was scenic. The way we chose was next to a small creek that had a few waterfalls on it.

Eventually we made it to the first creek, and quickly found this small waterfall. 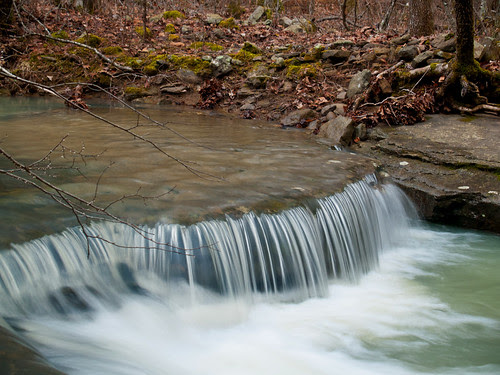 After crossing the creek, we then came upon the first of many great waterfalls there. 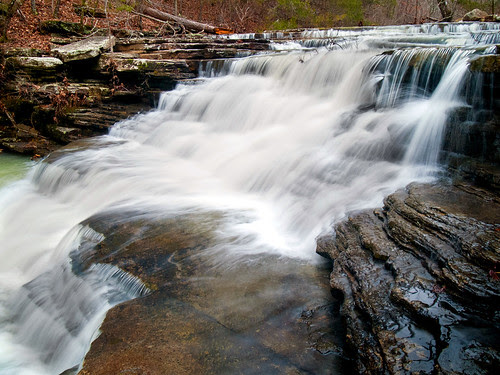 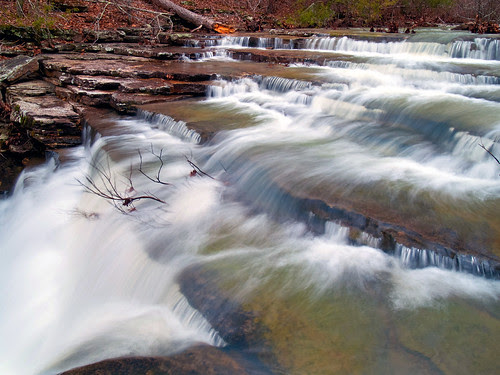 This was taken while carefully standing in the water of the creek. The shoes I wore that day were only "water-resistant," but since they were soaked anyways after crossing the creek, some extra water wasn't that bad... 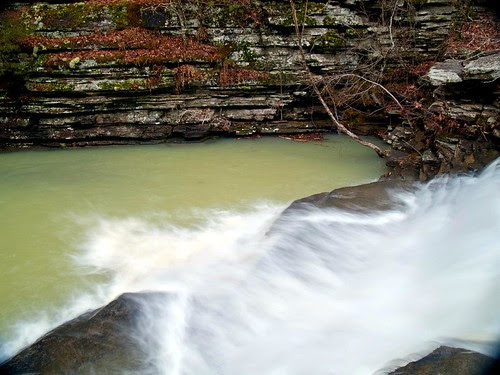 I walked back along the creek to where Matt and Zack were standing. It was there I heard the tragic news that Matt's camera had taken an unfortunate tumble into the creek, and had gotten soaked. Luckily the camera came back to life after being dried out (Matt's Pentax shall henceforth be referred to as "zombie camera").

But the creek with the waterfall shown above flowed into another creek, which had a lot of great waterfalls on it as well. This was a neat little area just above the spot where the two creeks met. 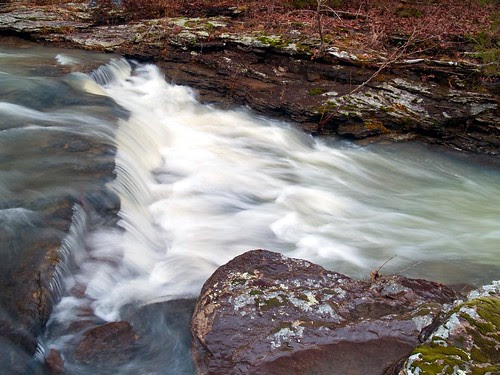 It's amazing that this place isn't more known, since there are so many great waterfalls. 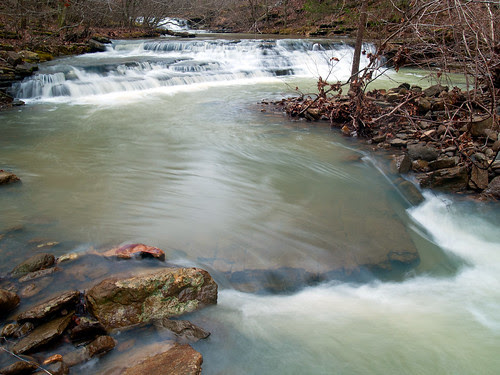 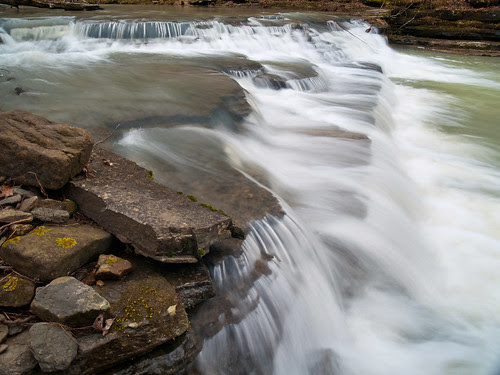 Just above this spot was what might be the neatest part of the creek. A waterfall stretched along the entire width of the creek, with water jumping and cascading over several huge rocks. 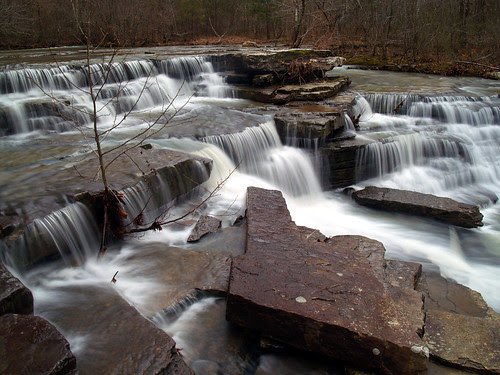 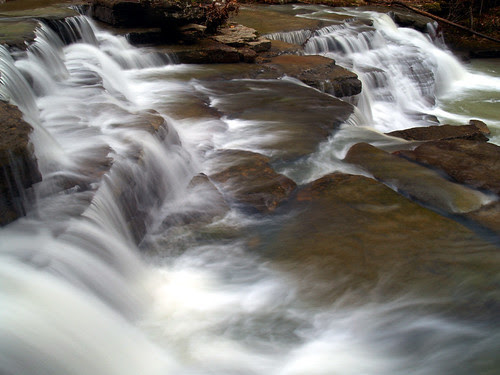 Most of the trees around here were pines, and the fallen pine needles provided a touch of color. 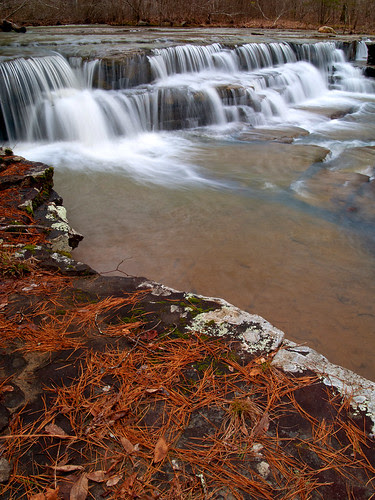 I felt bad for Matt, who had to sit and watch while we were taking pictures. I tried to make him feel better by saying that all my pictures were going to turn out crappy. I don't think it helped. 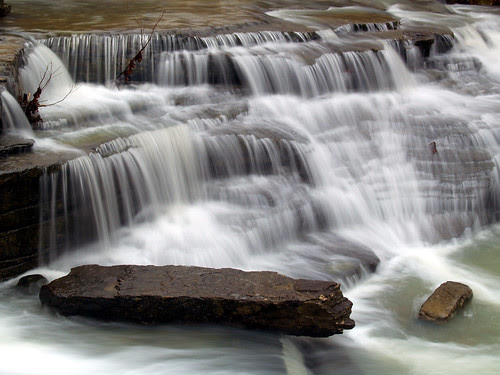 There are other waterfalls along this creek, but we didn't have time to explore more. That was my fault, I needed to be back in Little Rock by 2:00 that day. So we headed back, but not before getting one last shot of the falls. 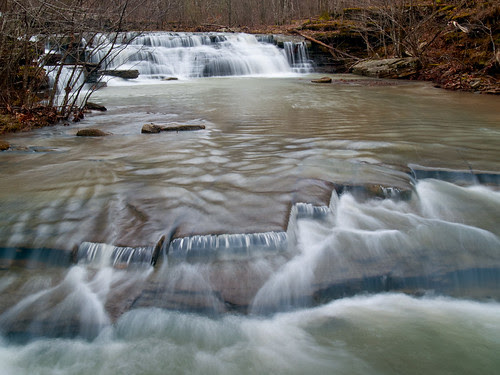 After crossing the creek, it was time to climb back up the hill. It was steep, and slow-going. It was a painful reminder that I've let myself get way too out of shape. I guess I need to do some more hiking to burn off the beer belly. But the Blue Hole was added to the list of places that require several more return visits to explore further (that list is growing longer and longer).
Posted by Cormackphotos at 9:14 PM

Enjoyed reading your blog and viewing your images! I stumbled up Zack on Flickr which led me to read his blog, then Matt's and yours. You all have great work,and it sounds like you all share a wonderful friendship, too.