The Stars At Night Are Big And Bright

I've been wanting to attempt getting some good pictures of the stars, and on the radio one morning they said that it was the perfect time for getting to view the Milky Way, thanks to the late rising of the moon. On Wednesday night last week, I set out with my friend John to Pinnacle Mountain. While the conditions were good for looking at the stars (clear skies), it was awfully humid and hot out. Walking to my car that night felt like I was instead swimming through the humid air.

Pinnacle Mountain is located just outside of the city of Little Rock, so there is quite a bit of light pollution out there. But I was surprised at the number of stars we could see.

My original plan was to go to the Educational Pond at Pinnacle Mountain, which I thought would provide a view of the mountain and the small pond at its base. But a sign at the gate to the pond said that the park closes an hour after sunset. Not feeling all that rebellious, we tried to find a different spot.

We ended up just heading down the road to the old Highway 300 bridge. This old bridge sits right on the edge of the park, and there weren't any signs saying that it was closed for the night. Keeping an eye out for snakes and hoping that the flashlight batteries would survive the night, we walked the short distance to the old bridge.

I have only tried to do astropohtography a few times, with some pretty poor results. I'm not too happy with how these turned out, either. I think I ended up getting more camera noise in the shot than I did stars. But this is the view of the stars looking up through the bridge. 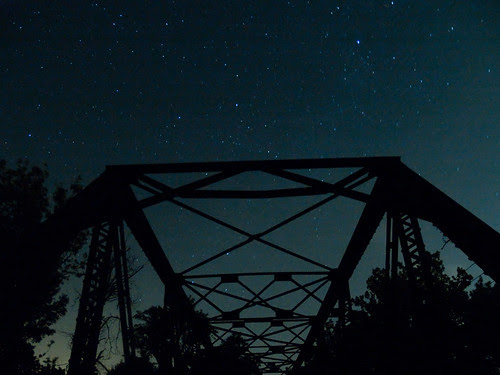 I don't think I had the camera set on the right settings for this kind of stuff. I'm going to have to try again some other time, maybe a place a bit further away from the city. 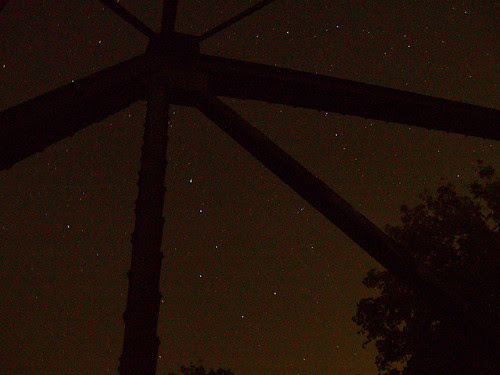 Posted by Cormackphotos at 9:25 PM

They don't look to bad at this size. I was shooting at ISO 1600 f3.5 for 30 seconds. I don't want to knock your E-500 around but camera age does have a lot to do with these sort of shots. The newer cameras have better processing and noise reduction. The newer Pentax K7 has the same sensor as my K20D but it is a year newer and it is better.

Yeah, I don't think the sensor is great for this kind of stuff on the e-500.

Actually I was saving up some money for a new camera, but it got used for a down payment on the new car instead...

I understand. I had about $600 bucks set back for some lens upgrades, but it seems to be getting used for things like daycare and other stuff.