Last Thursday was a stormy day, with some heavy rain falling just as I was getting off work. The bad weather caused some wrecks on the freeway, which meant that it took me an hour to drive home from work. But the storms cleared away the haze and brought along some nice, cooler weather. It also produced some great evening light, and an even nicer sunset.

Of course I only saw the sunset in the rearview mirror of the car as I was speeding towards downtown Little Rock. I missed the best light, and drove around town trying to find a place to get pictures of. I ended up stopping along Second Street, in front of the Pulaski County Courthouse. The light from the sunset still lingered in the western sky, reflected in the glass of the Stephens Building in the background. 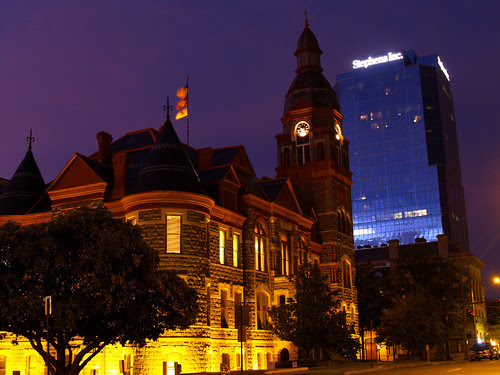 I started to leave, but instead went across the street to a small park that is sandwiched between the courthouse and Broadway. The park has a few rose gardens and an old fountain, but I haven't really visited this little park all that often. The main reason for this is that it is a popular spot for homeless people. Now I have nothing against homeless people, but I do feel a bit wary walking next to someone asleep on a bench so I can get a few pictures. But this night the park was empty, and I tried to get a few shots of the old fountain there. The building in the background is the Robinson Center Music Hall, built during the Great Depression. 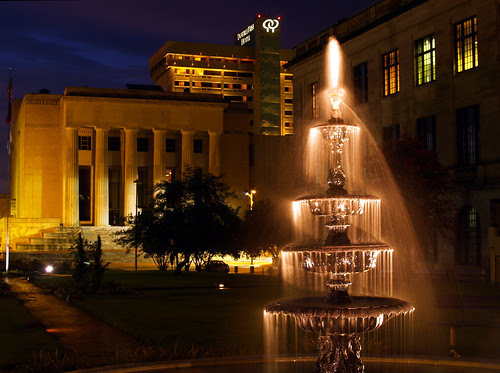 Posted by Cormackphotos at 11:02 PM