There was an unfortunate few weeks recently where I didn't take any new pictures (the last few posts published here on this blog were from pictures all taken back at the end of April). Part of that long delay was thanks to a little visit I had from a visitor called Covid-19. The pandemic finally caught up with me, even if I was one of those strange people that still tried to wear a mask. It also got Jonah, who managed to get by with a very mild infection (he lost his voice and was puny for one day, but otherwise was unfazed - thank goodness). I didn't fare as well, for about two weeks I felt really weak and would get fatigued really easily.

But once I started feeling better (and wasn't contagious), I got the camera and headed out one night after putting the kids to bed. I headed downtown and looked for something interesting to attempt to photograph. Eventually I pulled over into an empty parking lot and got this shot of a weathered sign, with the Simmons Bank Building in the background. 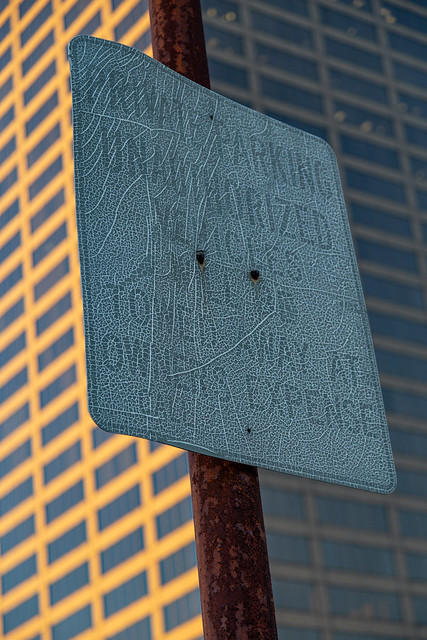 Later I parked, and then walked through Riverfront Park along the Arkansas River Trail as it passed under a tunnel that was covered in plants and vines. It looked kinda neat with the infrared camera. 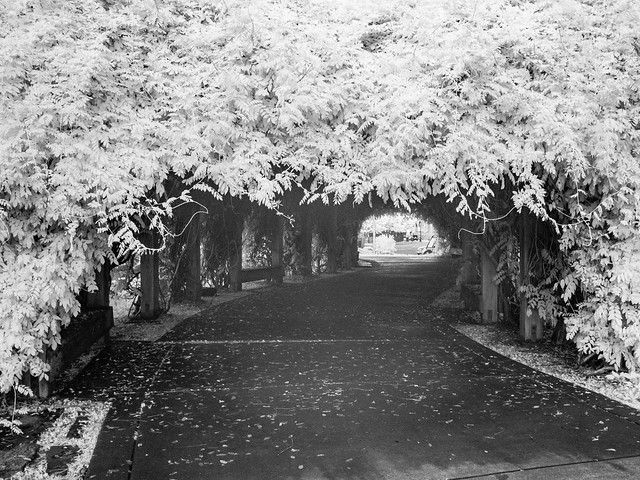 I walked over to the H.U. Lee International Gate and Garden, which sits at the base of the Main Street Bridge by the Statehouse Convention Center. The Korean-syle gate was built at a cost of $1.4 million in honor of Haeng Ung Lee, who was the co-founder of the American Taekwondo Association and was its Eternal Grand Master. The ATA was headquartered in Little Rock and the gate was meant to be a symbol of friendship between South Korea and the U.S. and as a monument to taekwondo. 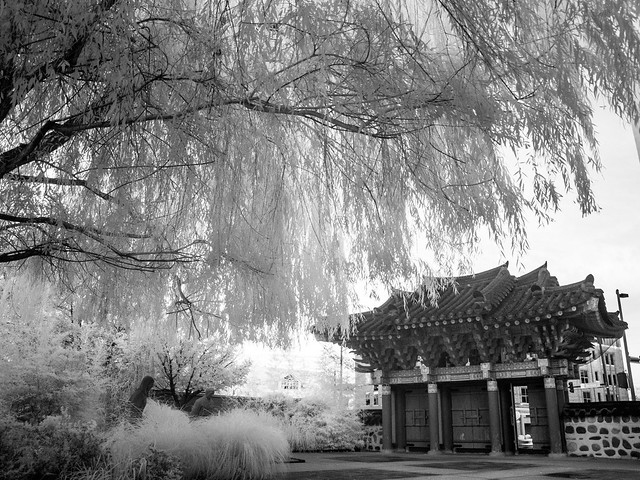 From there I hurried over to where I parked my car, in the parking deck by the main branch of the Central Arkansas Library System. Besides being a convenient place to park, the deck provides an awesome view of the River Market and President Clinton Avenue. I was there just in time for sunset: 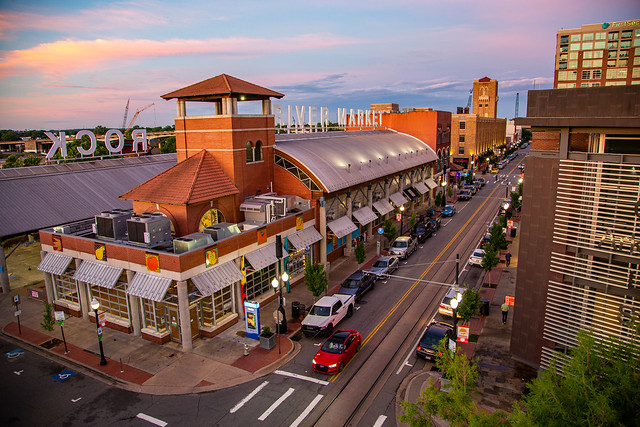 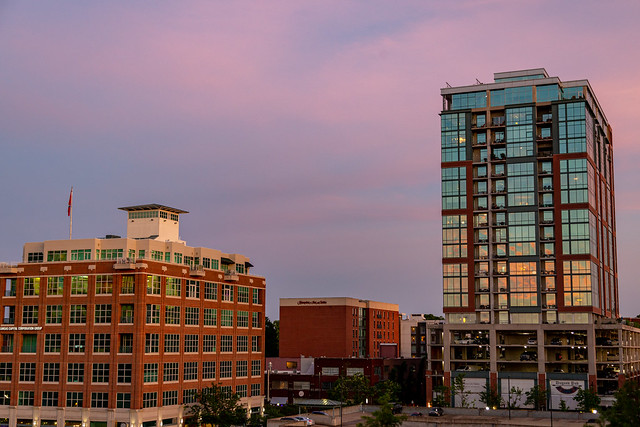 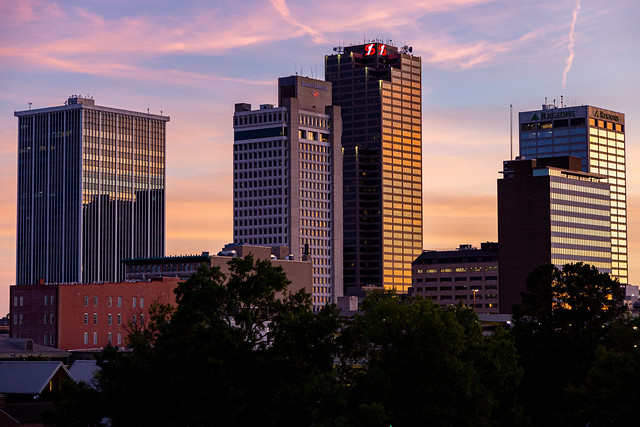 I hurried out of the deck and tried to catch a few pictures before sunset. I pulled over along Markham Street to try to get a few pictures of the historic Capitol Hotel. 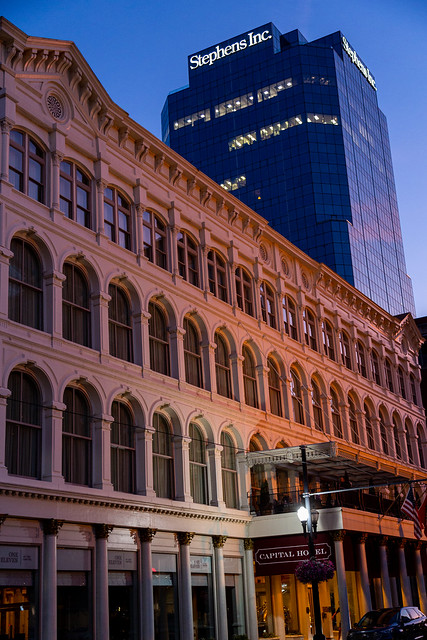 The hotel opened in 1873 and was considered to be finest hotel in the city (boasting fancy offerings like gas lighting and indoor plumbing). It is claimed that the hotel's large elevators were built to accommodate President Grant's horses (although some have noted that the large elevators were actually added in the 1980s). The Capitol Hotel has survived and thrived downtown, unlike several other of the notable hotels that once stood nearby. The Manning Hotel and the Hotel Marion, which stood just across the street from the Capitol, were all imploded in 1980 to make way for the Statehouse Convention Center and the Excelsior Hotel (a video of the implosion can be seen here). 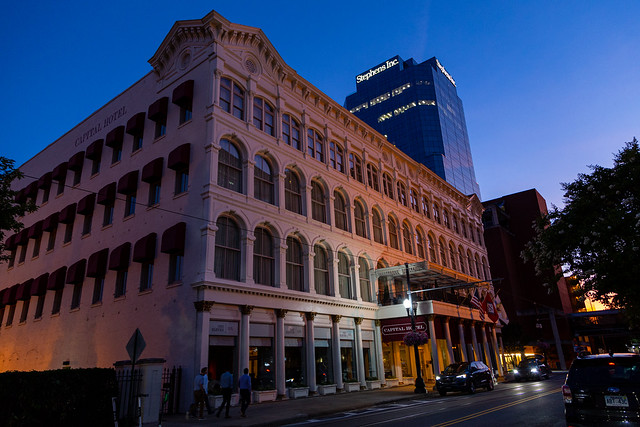 I ended up driving west, going from the Capitol Hotel to the State Capitol. I stopped to get this shot of the Capitol, reflected in a puddle. I guess it's fitting how the Capitol is reflected in a gutter, since that's where most of our state's politicians seem to be hanging out lately... 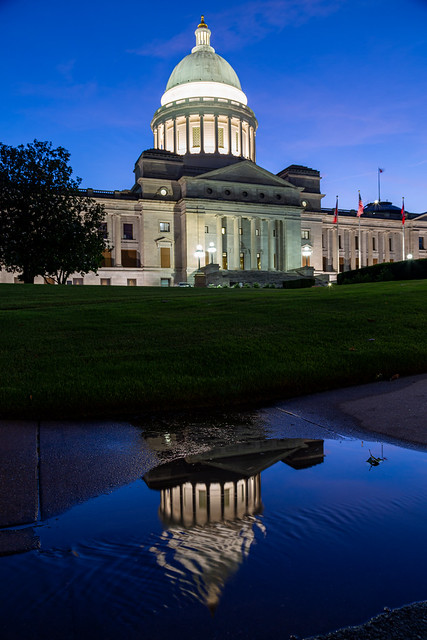 And then one last shot of the old Union Station, which was built way back in 1921. 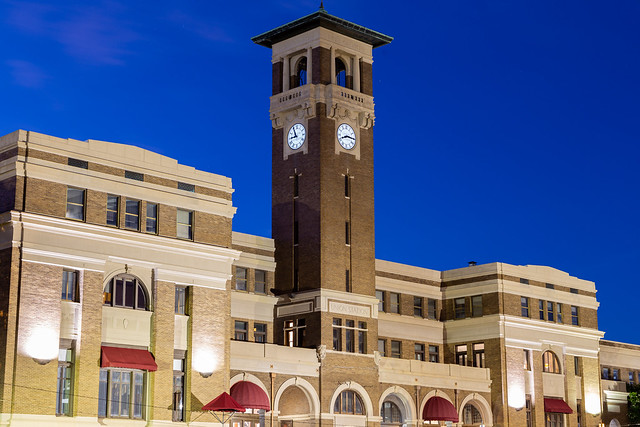 Posted by Cormackphotos at 11:08 PM