One of the best places to see the Little Rock skyline is from Fort Roots, which sits comfortably atop the Big Rock across the river. Big Rock was originally given the name "Le Rocher Français" by French explorer Jean-Baptiste Bénard de La Harpe exactly 300 years ago. On April 9, 1722, Le Harpe travelled up the Arkansas River and spotted the 200 foot-tall bluff along the north-side of the Arkansas River (along with the smaller bluff downriver that became known as the "little rock"). The French explorers had been told by Native American tribes that there was a large green rock along the river. Something must have been lost in translation, because the French thought this meant there was a large emerald there. Instead, they found a tree-covered hill. In honor of this, a park on the hill is called Emerald Park.

In the 1890s, the federal government acquired the land on the Big Rock and built a military installation, which became Fort Roots. Many of the fort's buildings that were built in the 1890s still stand, and several buildings along the old parade ground are listed on the National Register of Historic Places. In the 1920s, the fort was transferred to the Veterans Administration, and became a home of a veteran's hospital. The land is still used to care for veterans, and is the site of the VA Medical Center. 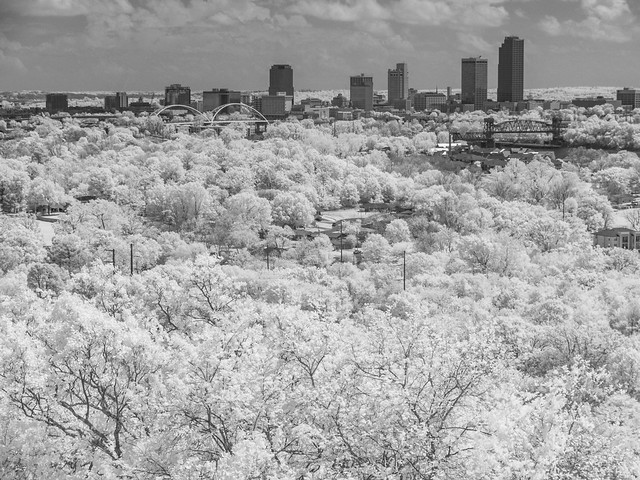 Posted by Cormackphotos at 11:34 PM