As the name implies, Little Rock's Main Street used to be the heart of downtown. Stores and shops lined the streets, and it was the commercial hub of the city (and maybe the state). Of course it would all come to an end, thanks to the suburban shopping malls and the abandonment of downtown. Efforts were made to bring people back to Main Street, including the Main Street Mall in the 1980s. But that was short-lived and it closed in 1989. For years afterwards, Little Rock's Main Street was a lonely and desolate place. A few stores survived, but they sat amidst a collection of empty and boarded up buildings. It was said that after 6 PM, when rush hour traffic left downtown, that you could fire a canon down Main Street and not hit a single person.

But things have definitely changed in the past five years. A major revitalization effort has taken place, with some new blood being pumped into Main Street. A stretch of Main has been dubbed the Main Street Creative Corridor, and the street itself has been redesigned with new lighting and rain gardens and plants. The Little Rock Technology has taken over a few buildings, and several restaurants have opened up. Loft apartments have opened or are supposed to be opened soon. It's an amazing transformation, and a huge step forward for downtown Little Rock.

A few years back, I took some pictures from the top of a parking deck that overlooks the intersection of Third and Main Streets. Since things have changed so much, I decided to head back downtown and try to get some new pictures of the view. I got to the parking deck just before sunset, and set up the camera and the tripod. But I had to move around because there ended up being a pretty neat sunset, and I headed to a different spot on the parking deck that had a better view. 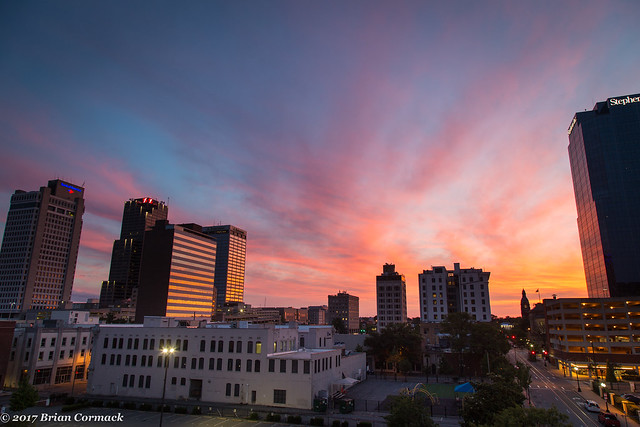 Once the sunset faded away, I moved the camera and tripod back to the first spot which overlooked the intersection of Main and Third Street. I like this view because it has a nice collection of old buildings in the foreground, with the newer skyscrapers lurking in the background. 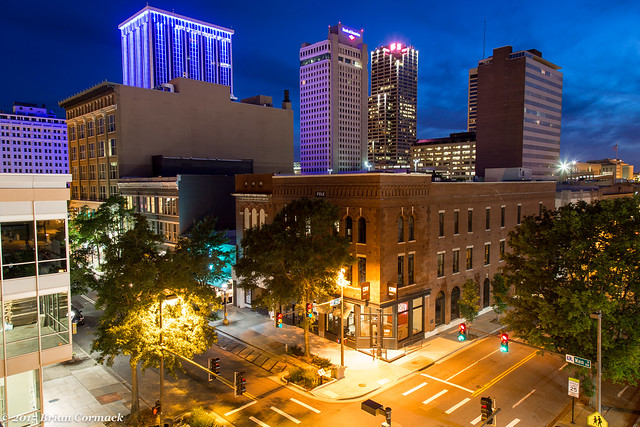 A lot has changed in the years since I had last taken pictures there. The military supply store that once sat at the corner (which has been open since 1870) has since moved a few blocks down the road and has been replaced by an advertising agency. Several restaurants have opened on this block (I highly recommend Bruno's Little Italy and Samantha's Tap Room. I haven't tired Soul Fish Cafe yet). Buildings that were once empty have new life in them, and once again people are returning to Main Street. For comparison, this is the last picture I took from here, way back in 2012: 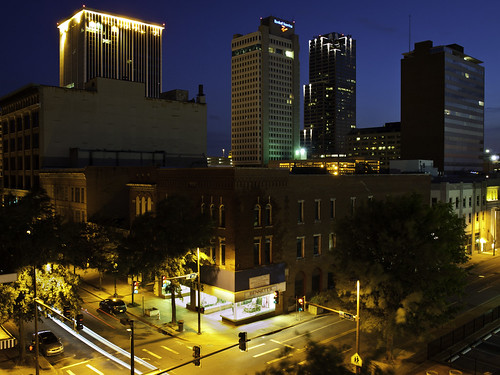 Posted by Cormackphotos at 10:34 PM