I don't usually post very personal things here, but this was actually very therapeutic to write.  This is an open letter to Marcia Lynn Jones, who is currently sitting in the Pulaski County Jail. I don’t know if she’ll ever read it, but I’m going to put this out for her, or for her friends and family to maybe see one day.

****
Marcia,
We’ve never officially met. You may recognize me as one of the people sitting in the courtroom during your several recent court appearances. Of course, I know you as the drunk driver that killed my Aunt.

I’ll refresh your memory for that night, since the details might be a bit fuzzy for you. On December 30, 2015, my Aunt, Juanita Power, was driving east on I-40 towards Memphis to spend New Years with her best friend. You were out at some party, apparently, and had gotten spectacularly and devastatingly intoxicated. With a blood alcohol level three times the legal limit, it’s amazing that you could even walk, let alone drive a car. But you did, somehow ending up driving the wrong way down the freeway.

Looking back, that night was so mundane, as if we were living in a much more naïve and simple time. Before the wreck, my wife and I had spent the evening watching Kindergarten Cop, of all things. Later that night I was in the kitchen loading the dishwasher, and didn’t hear my cellphone ring in the other room. I would find it and see two missed calls. It was the State Police trying to contact me.

I don’t know if you’ve been lucky enough to escape having to receive a phone call like this. If you’ve ever had to listen as a loved one breaks the news to you that something horrific and tragic has just happened. Have you ever had the misfortune to be the unlucky messenger that then has to pass that news along to other people? Have you ever had to tell anyone that their sister was just killed? That their Aunt was now gone? It’s an impossibly difficult thing to do. The anguish that I heard that night will haunt me forever.

I’ve tried to imagine all sorts of little things that could have changed that night to help prevent what happened. What if Nita had stopped to get gas before getting on the freeway? What if she made a stop to get a snack, or visit with us in Little Rock? I’ve imagined all sorts of things that could possibly have happened to put her out of harm’s way. The most obvious would be if you never got behind the wheel of a car that night. If you had called a cab, or gotten a ride, then my Aunt would be alive today. She would have continued living her life. She would have seen our baby be born a few months later, she would have been here at Christmas and Thanksgiving.

I’ve read recently that grief is something that a person can never just simply get over, it’s something that just has to be endured. We are trying to live our lives but there is a deep wound that will never heal, a scar that has afflicted an entire family. I’ve lost countless hours of sleep this year. When I can’t sleep, my mind replays the events of that night on an endless loop. This year has been so hard, so frustratingly and confusingly difficult. But I hope that when you try to get to sleep, that part of you is troubled by this as well. I do truly hope that you have realized how much pain you have caused. That maybe there is a part of you that is haunted by the same regret and sadness that has settled over my family like an oppressive weight.

When we see each other again, at the court hearing in February, I hope you might be able to look us in the eye and apologize for your actions. Nothing can bring back Aunt Nita now, but I hope that you have since realized what you have done. And if anyone else is reading this, I hope that you can realize how tragic drinking and driving can be. Please don’t expose anyone else to this unfairness and sadness. This was such a senseless and preventable tragedy. Be safe out there, and think of the ways that one mistake can have devastating consequences.

We celebrated Christmas with Nita just a few days before she was killed, but even though I brought my camera we didn't take any family pictures. I really regret that, but at the time I forgot to get the camera out. I have been looking back at all my old pictures, and I think this is one of my favorite pictures of her. It was taken in 2008, during a visit to Hawksbill Crag. I love her smile here. I really wish I could see that smile again. 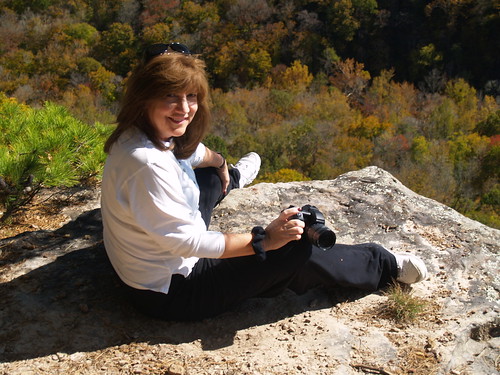 Posted by Cormackphotos at 11:38 PM

An update on the case. On 2/16/17, Marcia Lynn Jones was in court and pled guilty to the charge of negligent homicide and was sentenced to ten years in jail. It's not as much time as I would like, but I understand why the county prosecutors went ahead with the plea bargain. She will be up for parole in a year or two, and I hope that the parole is denied. I am a little relived that this legal proceeding is finally finished. It is a bit of some much-needed closure after all this time.

Somehow just ran across this. Did not even know you had a blog. I Miss Nita daily as I know we all do. Hard for me to comprehend a parole hearing so soon, but hopefully the state will do the right thing. Love you guys, see you in a few weeks!