On Saturday afternoon I tried to get a few more pictures of the fall colors. This has really turned out to be a good year for fall foliage, and I was eager to make another trip before the leaves fall off the trees. I drove over to Flatside Pinnacle, which is one of the most scenic vistas in the state. And luckily for me, it's only about an hour away from Little Rock.

And it's a nice drive out west - once you get passed the suburbs of west Little Rock. The road runs by Lake Maumelle, and into the Ouachita National Forest. You turn onto the Winona Scenic Drive, a dirt road that passes by a some nice views. The fall colors were spectacular along the way: 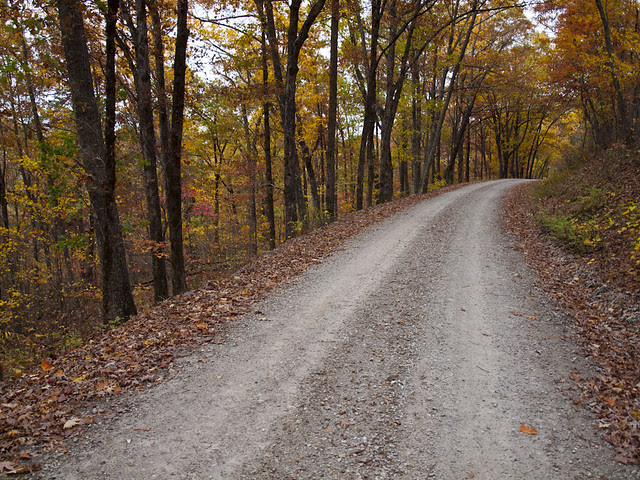 Along the scenic drive, I passed by several trucks parked alongside the road. This is hunting season, and there were people out there trying to shoot things other than pictures. When I got to the parking area for the short trail that leads up to Flatside Pinnacle, I was greeted by a guy decked out in full camo who told me there were people hunting around there, and I better have on some orange unless I wanted to get shot. Well, now I didn't really want to be shot and have my head displayed on someone's wall next to a few deer. So it seemed like a good idea to follow his advice...

I don't have very many pieces of orange clothing, but I was a bit prepared. The rain jacket I have has orange lining. So I made my hike while stylishly wearing a jacket inside-out. I didn't hear any bullets whiz by while I made the short and steep hike up to the top of the mountain, so I guess I didn't look like a deer to anyone. But when I got to the top of Flatside, stray bullets weren't the most dangerous thing up there. It was the wind.

On the unprotected summit of Flatside, I was greeted by a huge gust of wind. It was strong enough that it seemed like it could easily tug you over the side of the overlook. I inched as close to the edge as I dared, and set up the camera and tripod. The fall colors were great, but the wind was making the trees move and shake like they were being tazed. 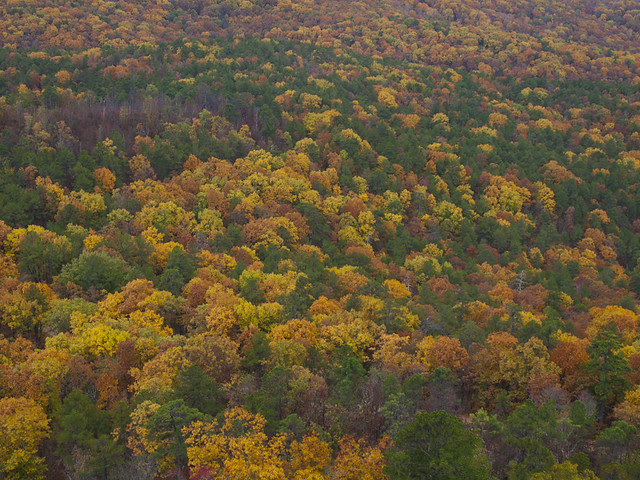 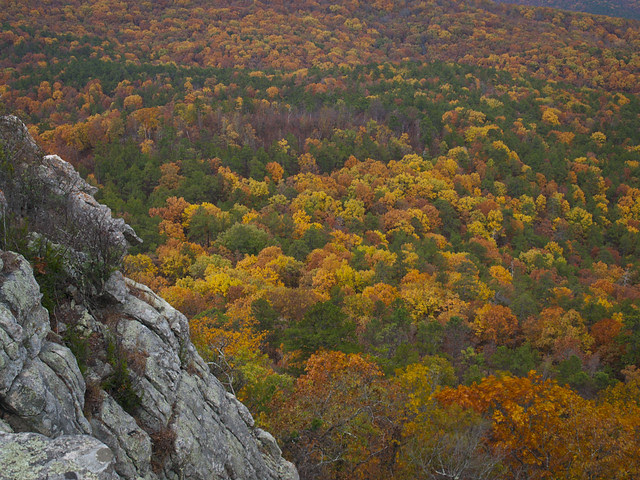 And the view looking towards the west, with Forked Mountain in the distance: 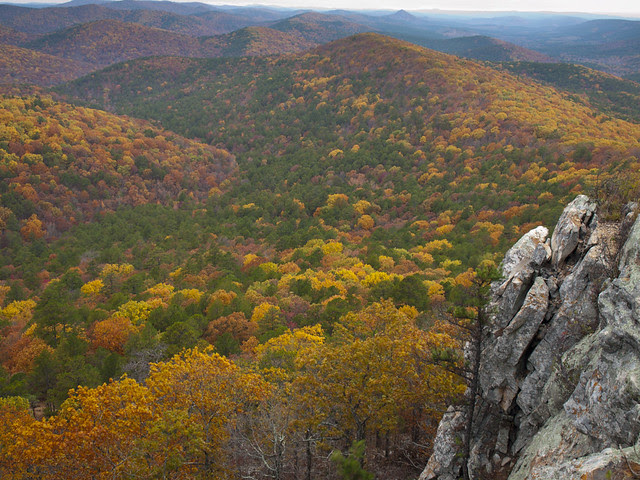 It is a great view from here. Flatside Pinnacle sits amidst the 11,299 acre Flatside Wilderness of the Ouachita National Forest. There is a nearly uninterrupted view of rolling mountains laid out below you. 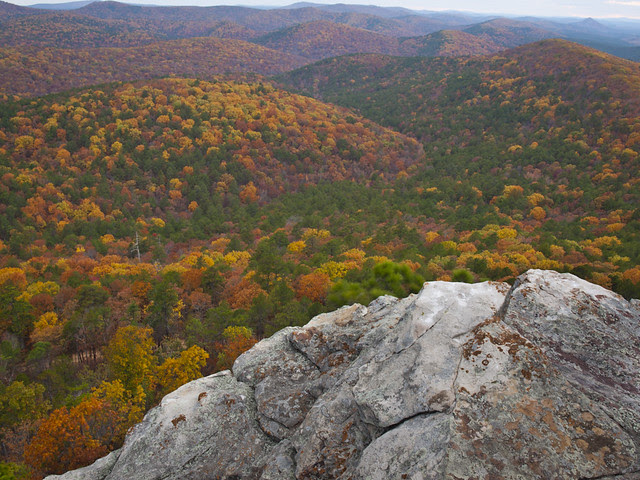 Just wear orange in hunting season so you don't get shot...

I sat up there and enjoyed the view. It was cloudy, so I wasn't sure if there was going to be a good sunset or not. I deduced, in my expert opinion, that it was going to be too cloudy for sun to poke through. So I packed up everything and made the short hike back to the car. So of course, as I was driving home, I noticed a nice sunset developing in the rear view mirror. Of course!
Posted by Cormackphotos at 9:13 PM

Brian, you should know by now that sunsets always show up at the last minute!

This used to happen to me all the time, I'd go somewhere and leave too early. I try and stick it out until the light is gone now, It's been way too many times that I've looked in my rear-view mirror to see a great sunset developing after I've left a location... =\

By the way, the word verification for this comment was "fleaksho" I think it's trying to say something about your photography...

This site knows my photos all to well....

I think we met that afternoon at Flatside Pinnacle. I was there at the parking lot grilling some food & asked you if you thought there would be a nice sunset. Anyway, I did stay there hoping the clouds would break & luckily it did. Here is my shot of that night, http://www.lauravuphoto.com/landscape/best-of-2011-us-landscape-photos/

Yeah, I learned my lesson about leaving too early as some of the best colors happen after the sun finally set.

Laura, great photo! I really wish I had stuck around, they put on quite a show for you.

Hi, approximately how long is the hike from the flatside pinnacle trail head to the summit? Everywhere I read it says it's a short hike. But I am interested in knowing the exact distance or approx time taken to reach the summit. Can you help me?

Hi Jay, I don't know the exact distance of the hike, but it is short. Probably a half-mile hike at the most, although it is all uphill. It probably takes about 15-20 minutes to hike all the way to the top. It's an amazing view and definitely worth the drive out there and the hike!