Fall at the Buffalo River - Part 2

When I woke up just before dawn on Friday morning at the Erbie campground, it was a cold 42 degrees outside. The rain that had fallen so consistently the day before had slacked off overnight, and the skies above were clear. I had hoped that the new day would be cloudy, with perhaps a bunch of fog (the better for photography). But alas, it looked like the sun would soon be up...

So after getting everything loaded up from the campsite, we made the short drive down to the Parker-Hickman Farmstead, which sits by the Buffalo River. This is a great place to explore. There are a collection of neat old buildings here, including the oldest standing log structure within the Buffalo National River. There was some fog lingering around the farmstead, but it was quickly being burned off as the sun rose higher. I tried to rush around and get pictures before the sun fully rose.

This is the view of the home at the Parker-Hickman Farmstead, which was built in the 1840s: 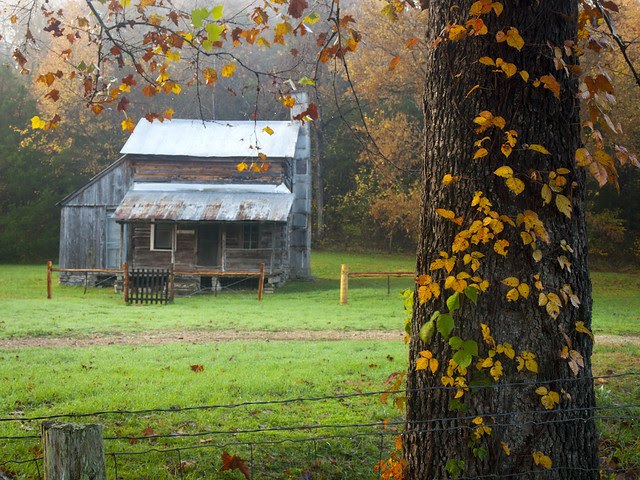 After taking quite a few pictures, we crossed over the Buffalo River via the low-water bridge at Erbie. We drove north, but quickly stopped at this field that was lined with fog-covered hills. The field had just recently been cleared for hay. Most of the work appeared to have been done with this old-timey looking tractor: 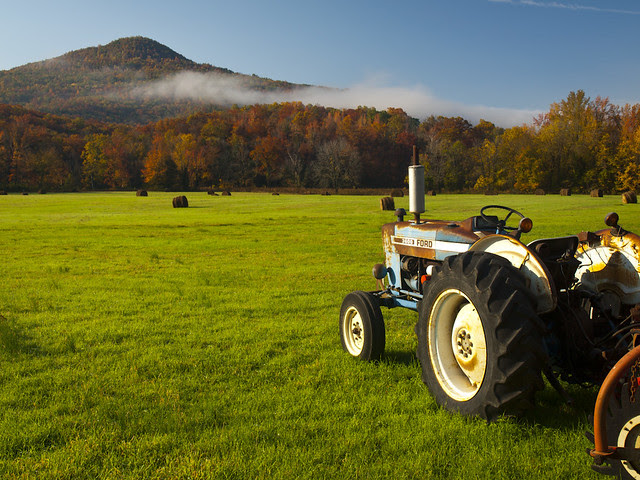 The field was dotted with numerous hay bales, and the distant mountains had just a bit of fog (or low clouds) drifting by: 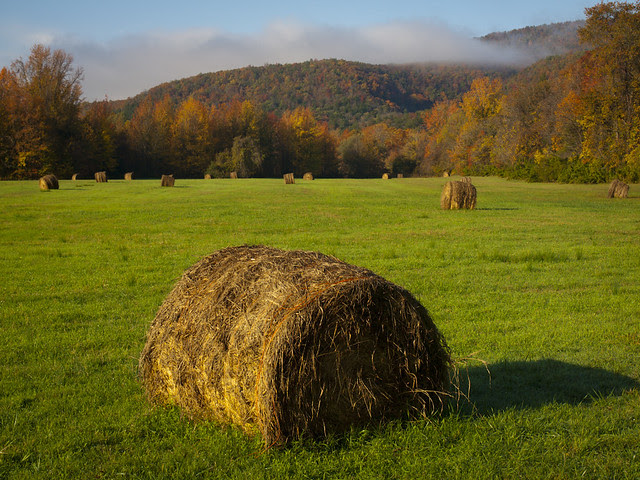 The field was guarded by a rather large barn. This was the fence by the barn, which opened up onto the field... 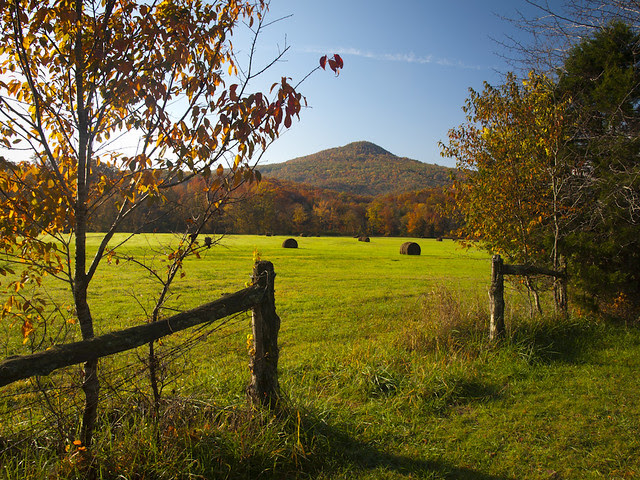 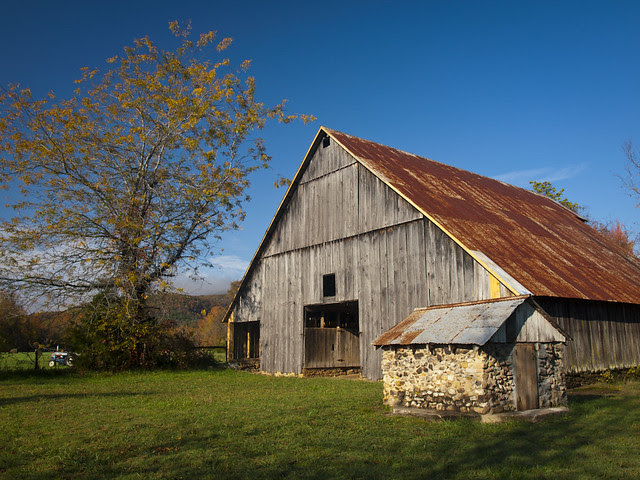 Near the barn was this old house. Which I presume this is where whoever used to work this land back a hundred years ago used to live. The house is empty now. I walked onto the front porch and the only residents now appear to be wasps. There were numerous nests there, which were thankfully empty of stinging insects... 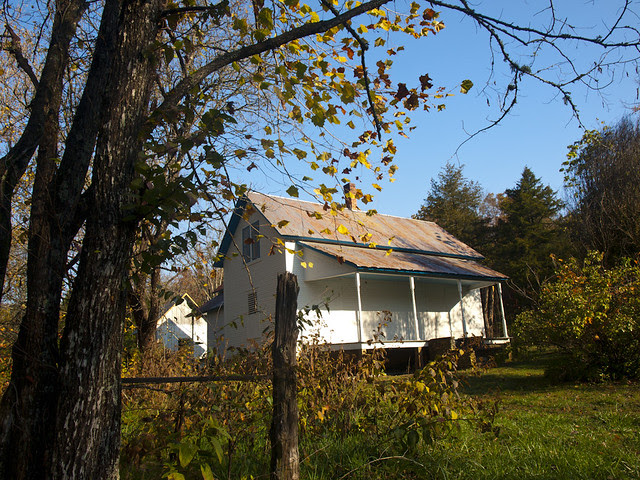 We got back into Zack's Jeep and followed the road past the Cecil Cove trailhead. We drove north, following a few different dirt roads. I was glad that Zack had a GPS, because I would have quickly gotten lost. We made a few turns, and passed this neat old church. I made Zack stop so that I could take a picture: 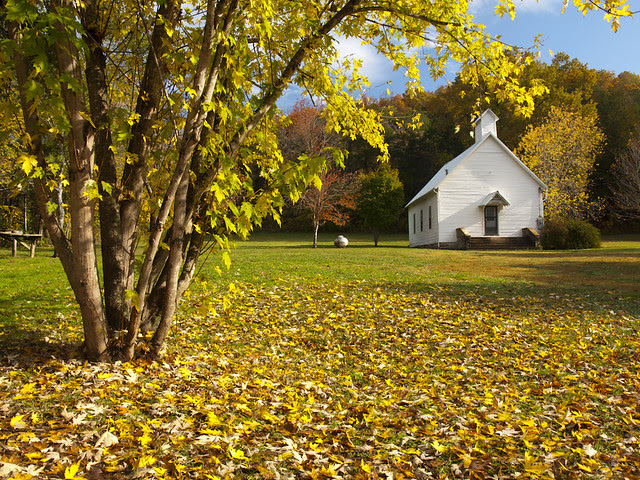 It was a nice drive, and we soon found ourselves meeting up with Hwy. 7 again. We turned south, heading back towards the Buffalo River. Highway 7 crosses the Buffalo River at Pruitt, and we stopped there a for a few pictures. The sun was out, so the light was a bit harsh. But this is the view of the bluffs along the Buffalo River, at Pruitt: 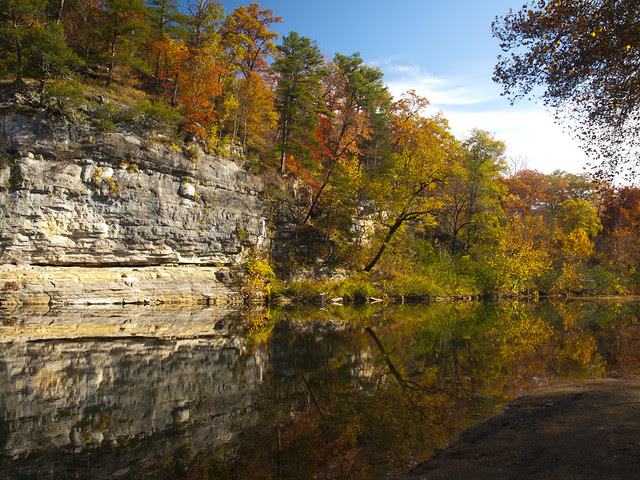 The Hwy. 7 bridge over the Buffalo is a neat old truss bridge, built way back in 1931. I've been wanting to get a good picture of it for a few years now, so when there was a brief lapse in traffic I stood in the middle of the road and tried to get a shot: 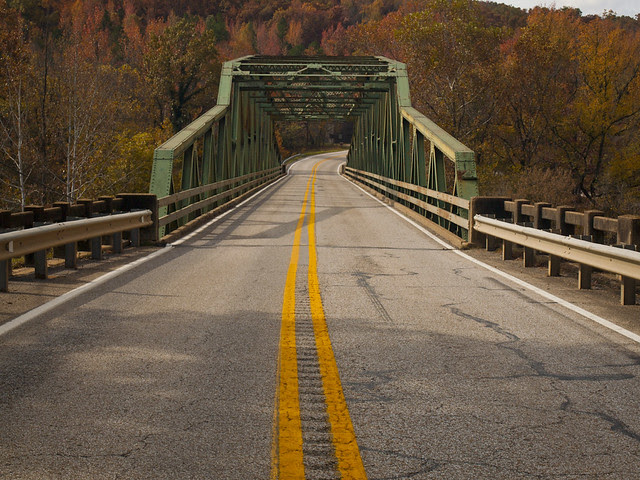 Zack found a small trail that went off into the woods, which ended up providing a nice overlook of the bridge. I took a few more pictures, but was annoyed with myself because I managed to leave my tripod back in the car. Luckily, the photos weren't blurry: 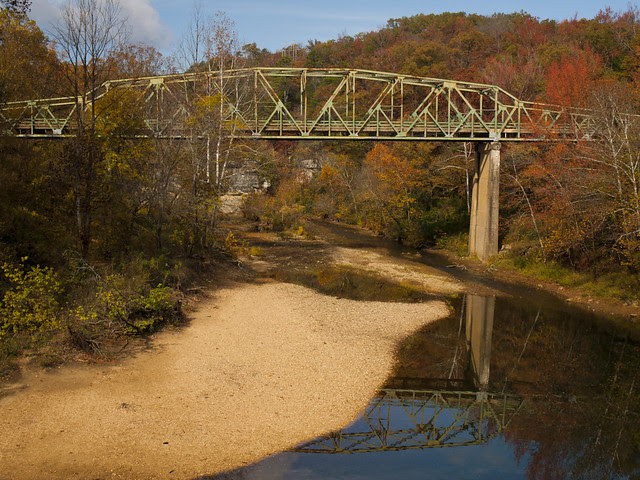 We drove back into Jasper, just around lunch time. It would have been a perfect time to pay another visit to the Ozark Cafe. But we weren't the only ones out there who had that idea. The road was packed with cars outside of the Ozark Cafe, and the place looked to be full of people. We reluctantly turned around, and decided to head on back home. 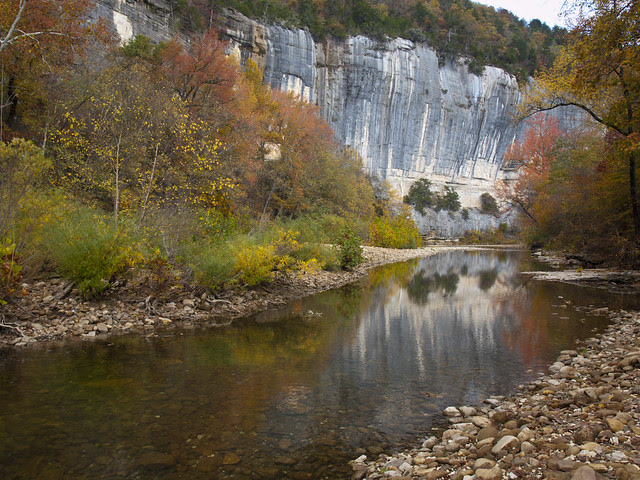 We drove back through Boxley Valley and then headed south through the Ozarks. Since we missed getting lunch at the Ozark Cafe, we instead stopped at the Burger Barn in the small town of Ozone. I order the bacon-wrapped steak burger (which was as delicious as it was unhealthy). From there we made the long drive back home.

When I got back to my apartment, I gathered up the various memory cards from the trip and downloaded a total of 14 gigs worth of pictures. I hope that y'all enjoyed the pictures from the trip!
Posted by Cormackphotos at 10:04 PM