As a special treat before Jonah started kindergarten, we decided to take him on a little trip up to St. Louis for a few days. We hit a lot of the kid-friendly places there, like the St. Louis Zoo, the City Museum and a Cardinals game at Busch Stadium. Thanks to the Delta variant, it wasn't the best time to travel, but we wore masks and did our best to social distance from people whenever we could. We booked a hotel downtown, which provided this view of the place that Jonah said was his favorite place on our trip - the Gateway Arch. 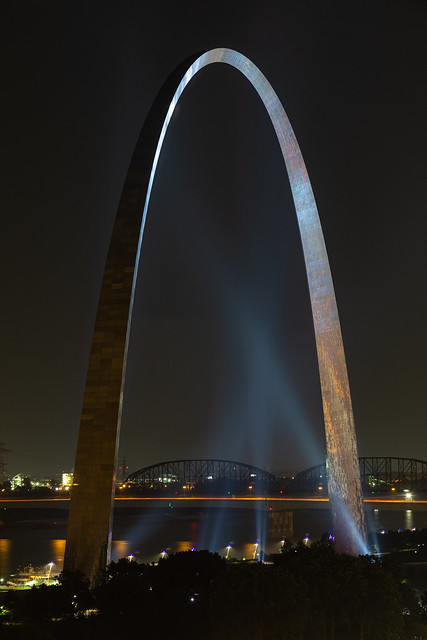 We also had this view, looking down at the busy intersection of Broadway and Washington. 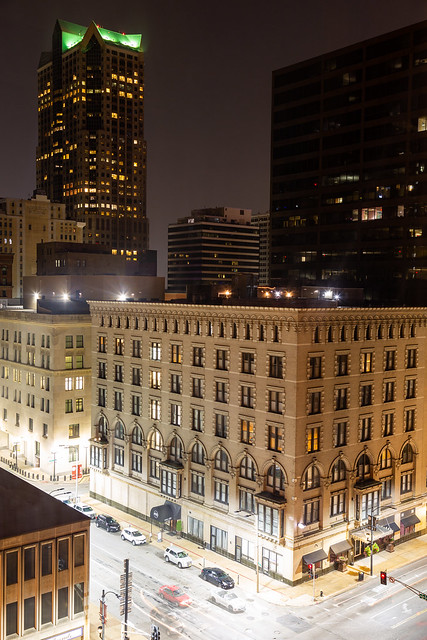 And I did bring the infrared camera with me, so I got this shot from the hotel window too. 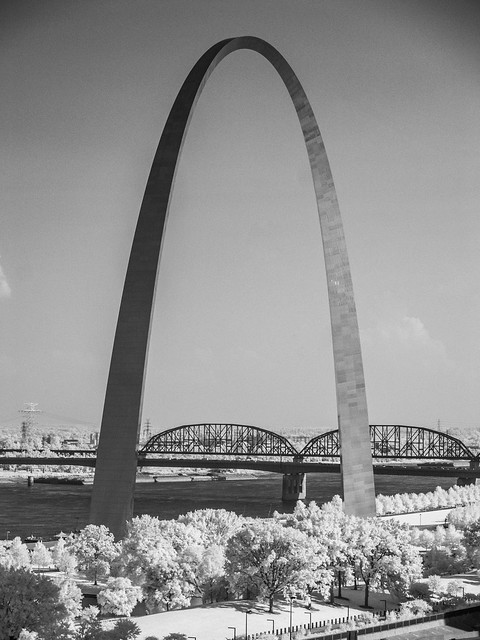 And I also brought the infrared camera with me when we walked to the Arch (my apologies to anyone who is tired of seeing infrared pictures!). 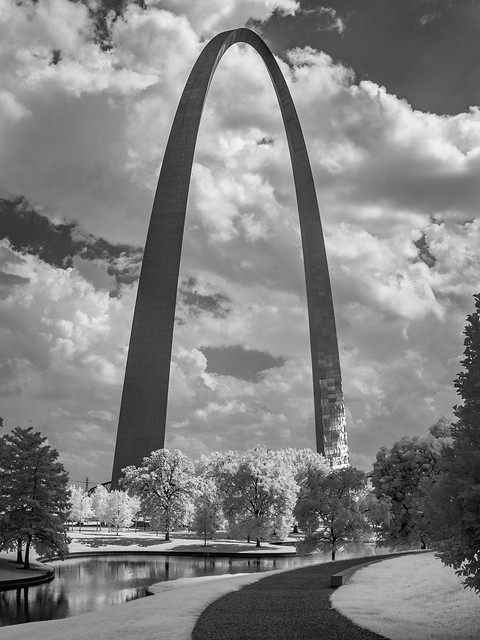 It had been about 15 years since I had last been up into the Arch. A lot has changed since then - the grounds of the Arch have been competely redone and improved. A cap has been placed over the freeway that divides the Arch from the rest of downtown, and a brand new visitor's center has been built. 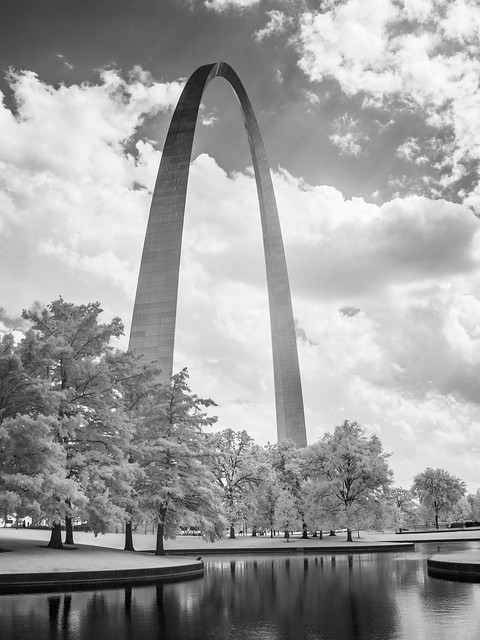 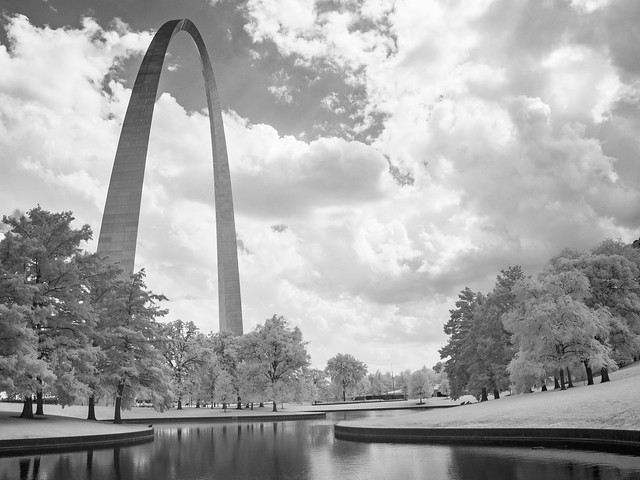 We went through the visitor's center and then walked through the museum underneath the Arch (which has all been redone). Thanks to Covid, only a limited number of people were allowed to go up to the top, and could only be up there for 15 minutes. Before going in we were nervous that Jonah would get freaked out while riding the tiny and cramped elevators that go up to the top, but he thought it was like a ride and was excited about it. After a few minutes we were at the top and we hurried to one of the windows to see the view... 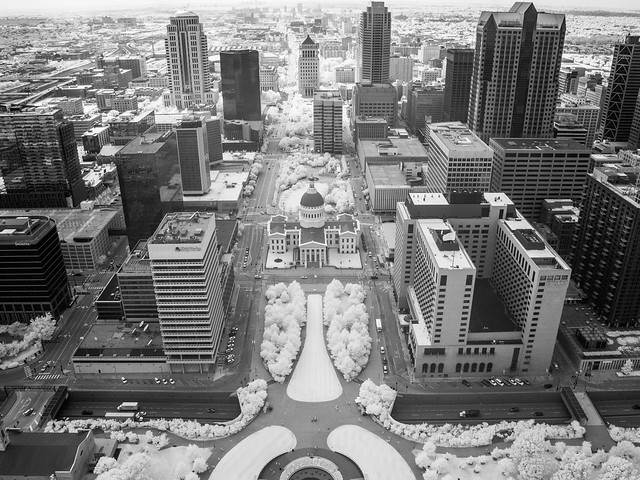 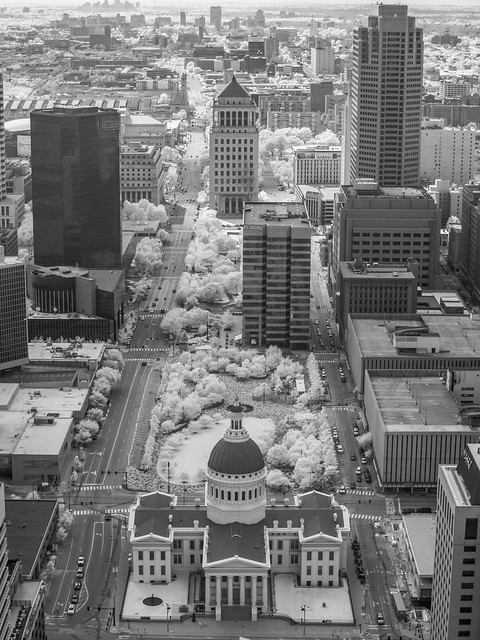 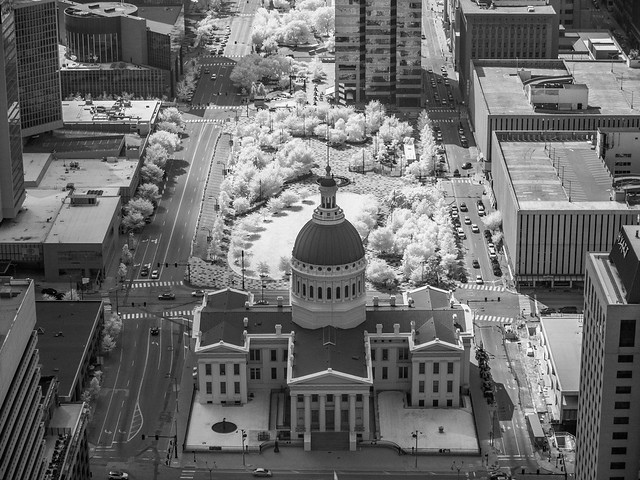 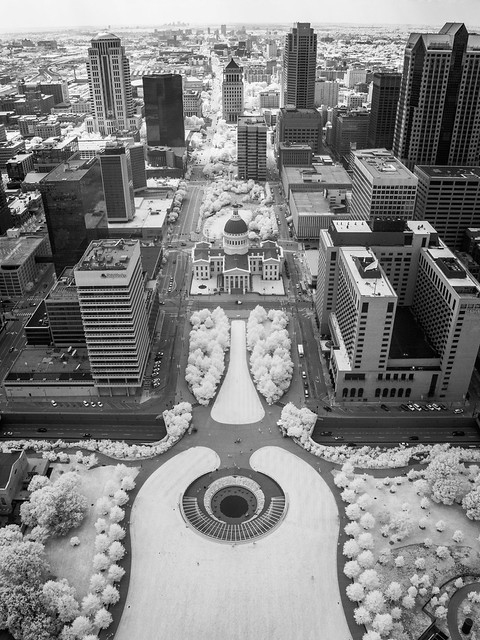 I only brought the infrared camera with me, but I did get this shot using the wide angle on the Iphone. 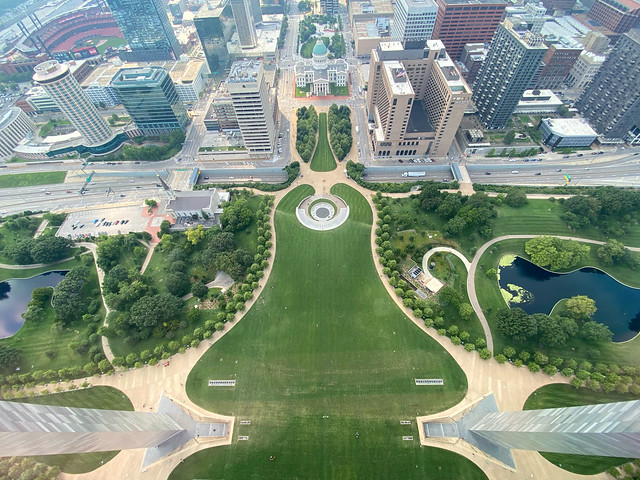 And then our time was up and we had to make our way back to the elevators and then onto the solid ground. On the walk back to the hotel I got one last shot with the infrared: 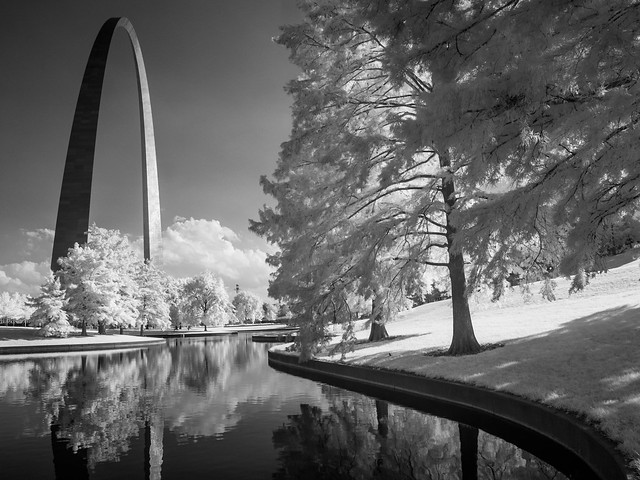 After putting Jonah to bed, I headed out and got a few more pictures of the Arch at dusk. 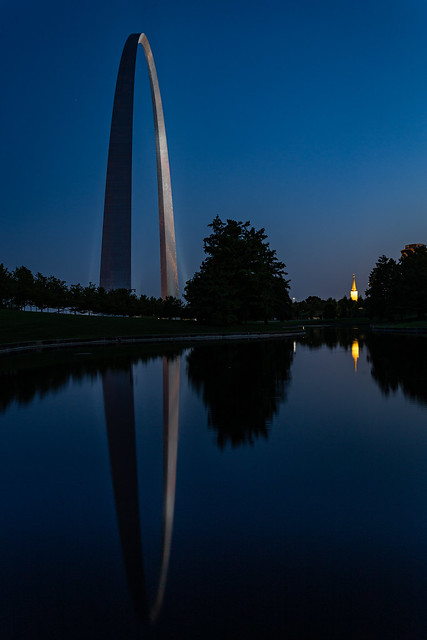 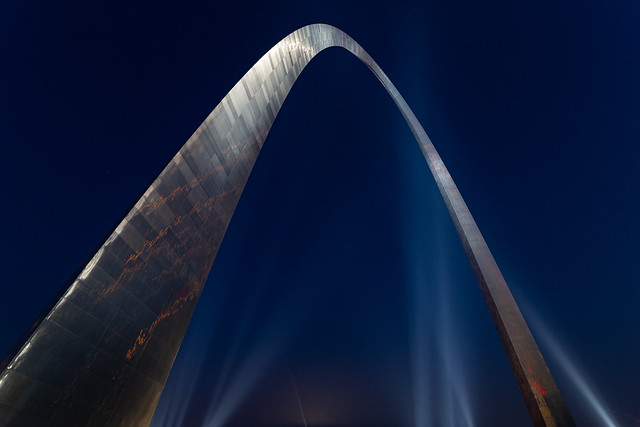 And the Arch towering over the Old Cathedral, which is formally known as the Basilica of Saint Louis, King of France. The cathedral was built in 1834 and was the first cathedral built west of the Mississippi River. The writing on the front translates as "In honor of St. Louis. Dedicated to the one and triune God. A.D. 1834." 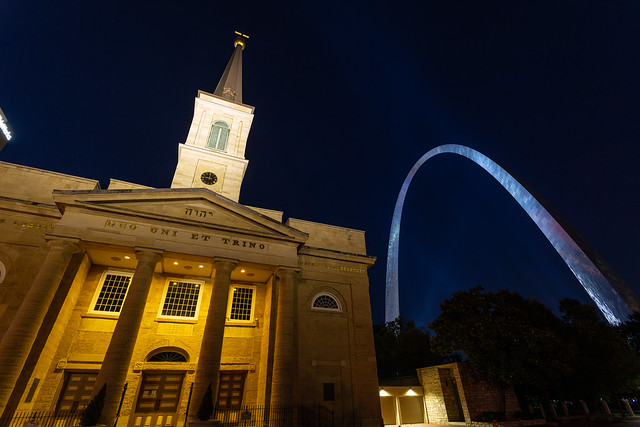 From there, I headed over to the Old Courthouse and Kiener Plaza. A prominent part of the plaza is the statue of the "Olympic Runner," and which was installed in honor of Harry J. Kiener (a local who was part of the the U.S. track team at the 1904 Olympics, which was held here in St. Louis). 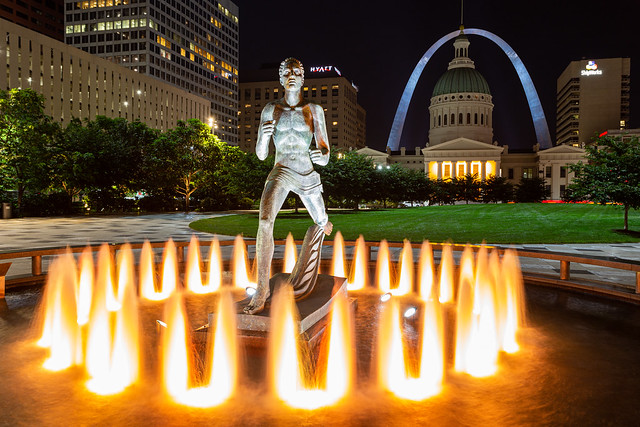 The plaza has a great view of the Old Courthouse, which was completed in 1864. In 1846, the courthouse was the setting for the infamous Dred Scott case. And up until 1894, it was the tallest structure in the city. 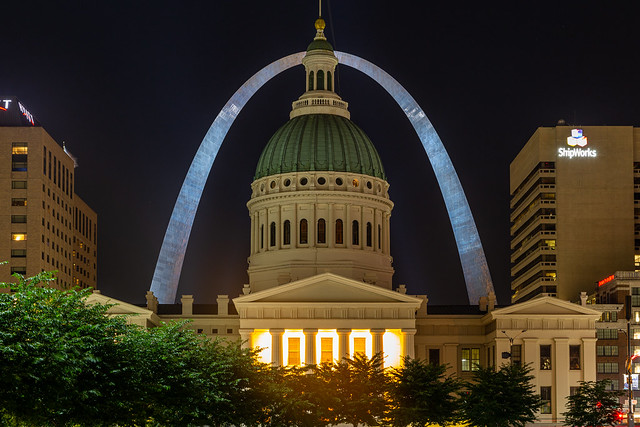 And another Iphone shot of the Old Courthouse and the Arch, from a rooftop bar where we got a quick drink one evening: 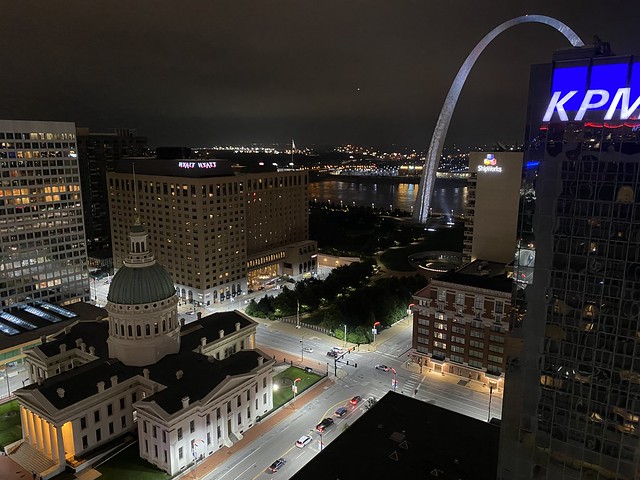 And one last shot, taken while we were getting ready to check out of the hotel. The light from the rising sun was casting a golden hue on the Arch... 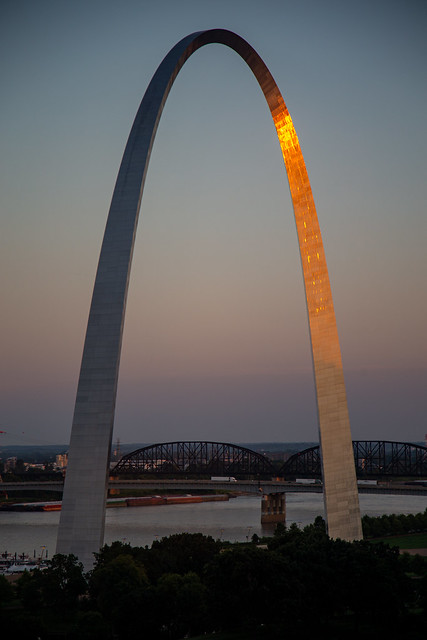