From Natchez, we headed south into Louisiana. We drove through Baton Rouge, and then made a stop just outside of New Orleans. Along the Mississippi River, east of the city, sit several grand old plantation homes that date back to the early 1800s. One of the most famous of these houses is the Oak Alley Plantation, which was built in 1837. The path to the house is framed by two rows of massive live oak trees, and it has been used in several films like Interview With A Vampire and Primary Colors (and even a Beyonce video). We stopped to take a few pictures but found out that the entrance fee to the grounds was a very steep $22. Since we didn’t want to pay nearly 50 bucks just to take a few pictures (and we had visions of a toddler running through the house like a tornado and destroying a bunch of priceless antiques), we cheated a bit and got a few pictures of the live oak trees from the road. It worked, and saved us some cash! 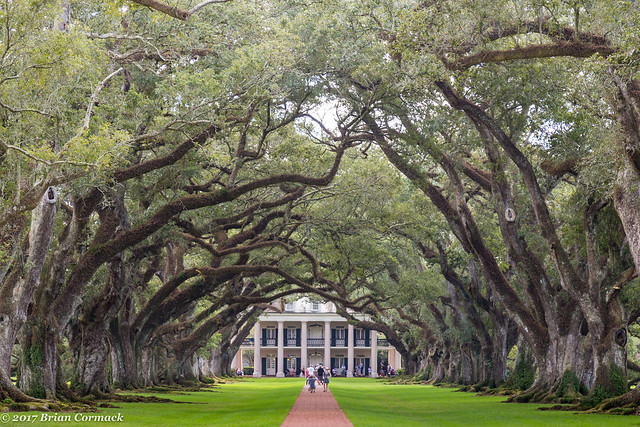 Although Oak Alley would get its revenge. Right after we left, the low tire pressure warning came on. We pulled over and found a big fat screw had embedded itself in one of the tires. We had to find a place to patch it before we drove on into New Orleans, eager to head into the French Quarter.
Posted by Cormackphotos at 10:50 PM