One of our next stops in New York was the Empire State Building. It’s a popular tourist spot, with about 4 million people visiting the Observation Deck every year. But there's a good reason it's so crowded, the views from the top are amazing. I was eager to visit the building again, on my last visit to New York in 2006 we did go to the Observation Deck but the outside viewing areas were closed after a storm dumped a bunch of snow the night before. We had the rare privilege of having the entire place to ourselves (other than the handful of extremely bored workers who were stationed there). Here’s the view through the windows on that visit, with the snow piled up. It makes you wonder how do they get rid of all that snow? It’s not like you can just toss it over the side. 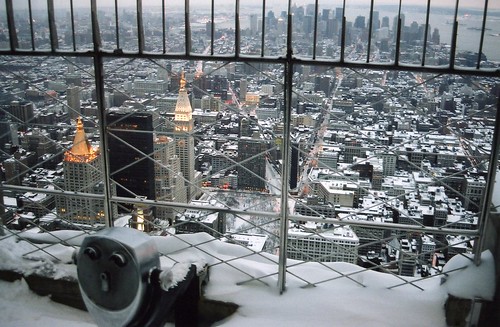 The Empire State Building is 102 stories tall, and was built in 1931. With the antenna, it top outs at an impressive 1,454 feet tall. When it opened it held the title of tallest building in the world, a distinction it held until the World Trade Center was built in 1970. It’s now the 39th tallest building in the world, and the fifth tallest in the US. 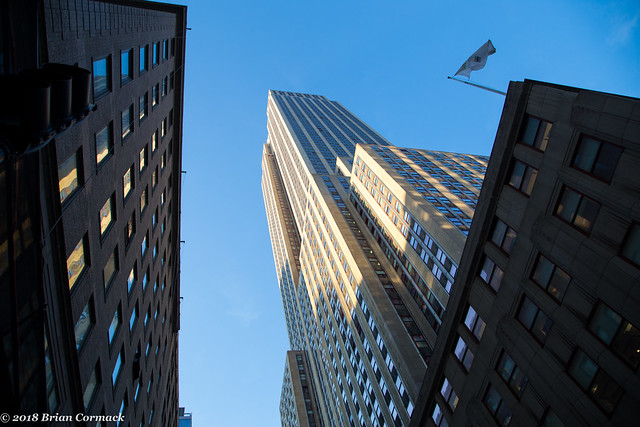 And a view of the lobby, which is surprisingly small for such a huge building. 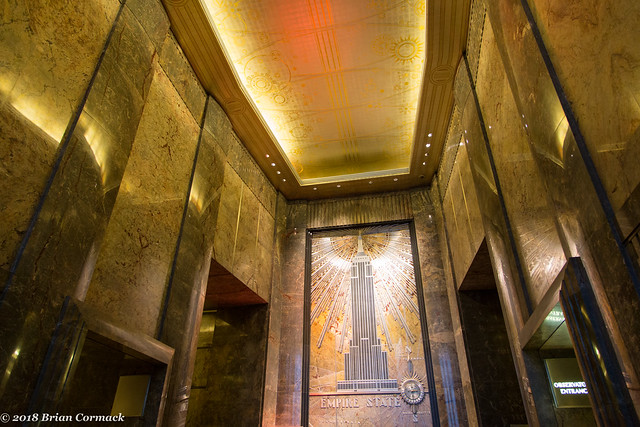 Then we headed up the elevator, through security, then through a rope maze and then finally to the Observation Deck. We had tried to time our visit so we would be there around sunset. But we weren’t the only ones who had that idea, the deck was already crowded with people all fighting for a spot along the railing. I managed to find a spot along the rail and tried to get a few pictures. This is looking down towards Madison Square Park and the Flatiron and Met Life Buildings. 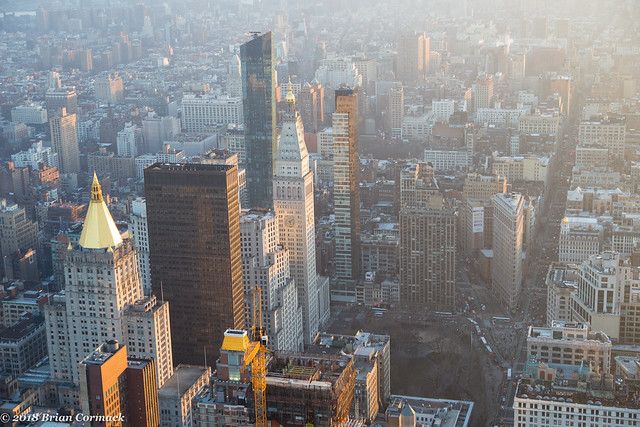 And a wider view, with Lower Manhattan off in the distance. 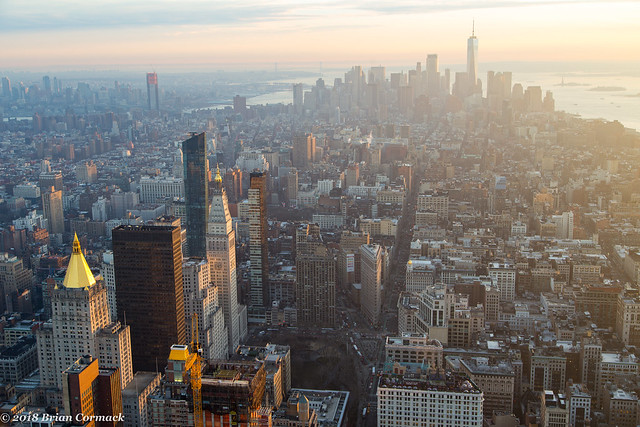 I reluctantly gave up my spot along the rail, and headed to the other side of the deck. This is the view looking north, towards the UN Building and the Chrysler Building. Somewhere under all of the skyscrapers is Grand Central Station. 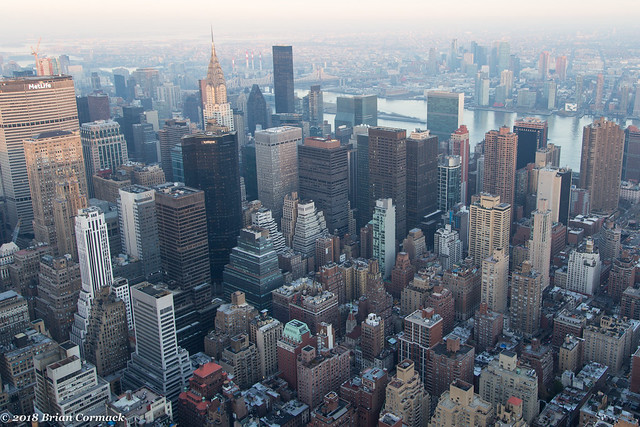 And then a zoomed in view, showing the variety of buildings and architecture. From this vantage point, you can definitely see how dense the city is. 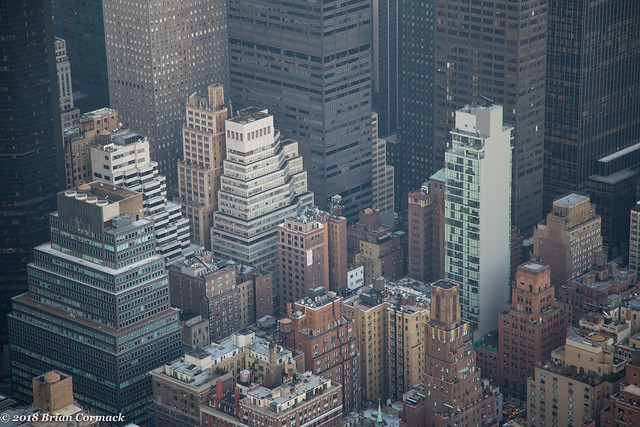 It had gotten more and more crowded on the deck, but this pigeon had a good idea to land on the other side of the rail where it had the ledge all to itself. From there it had a great view, and was looking over the city like Batman (or Birdman?). 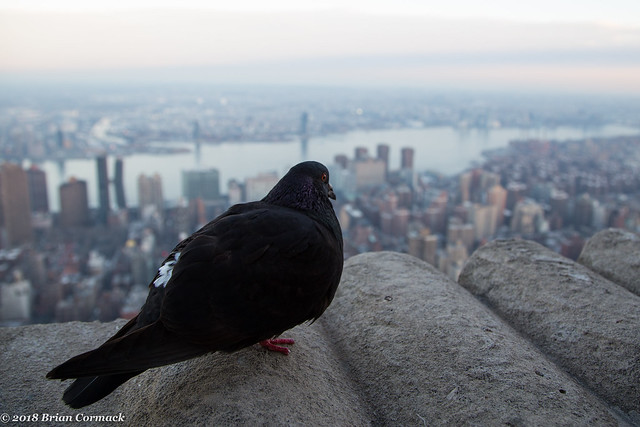 Construction began on the Empire State Building in 1930, just at the beginning of the Great Depression. At the peak of construction, about 3,500 people were working on the building. It was completed remarkably fast, in just over a year, at a cost of nearly $41 million. The building has a grand total of 2,248,355 square feet of space, along with 6,514 windows and 73 elevators. There is a race every year where people run up the stairs to the 86th floor (which is 1,576 steps – no thanks). 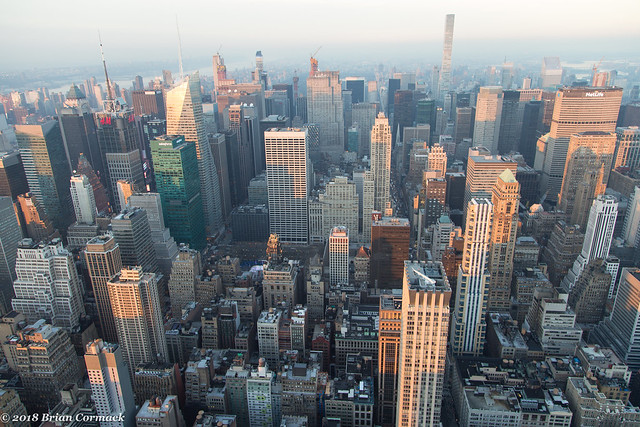 If you’d like to rent space in the Empire State Building, the average cost is about $53 per square foot. So if you wanted to, perhaps, rent an entire floor of the building it’d only cost about $1,378,000 or so for a year. Some of the companies that lease space there include Walgreens, Bank of America and LinkedIn. 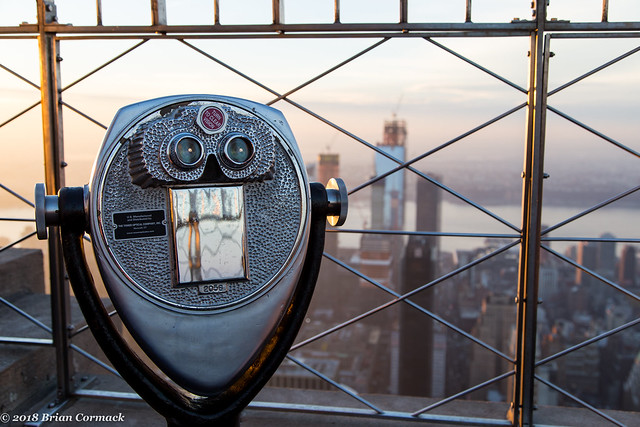 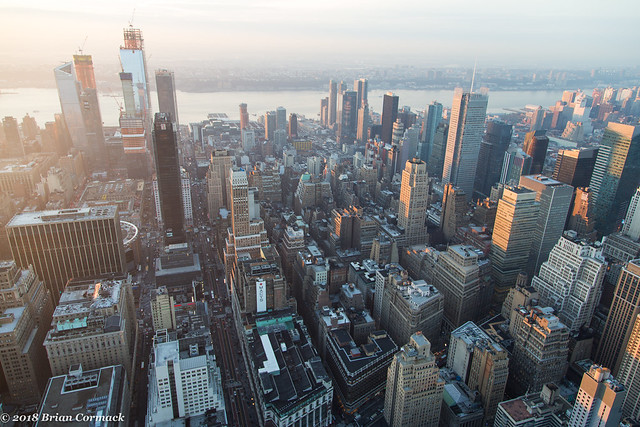 It was cloudy during most of our time in New York, but luckily on the day we were at the top of the Empire State Building we were treated to a pretty nice sunset. Low clouds reflected the pastel pinks and oranges as the sun sank below New Jersey. 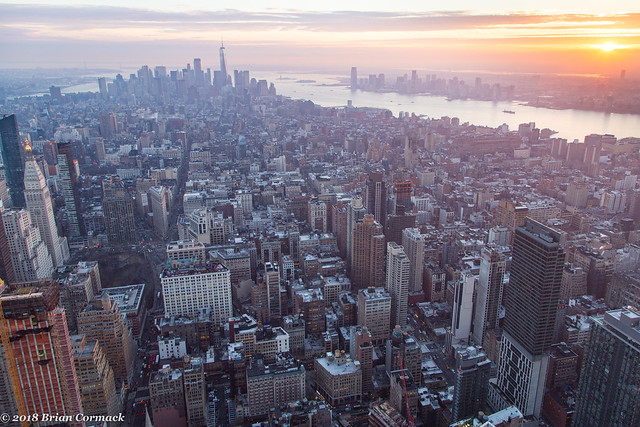 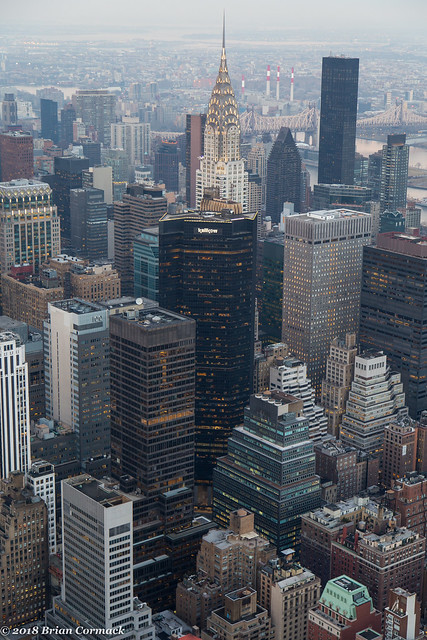 Tripods aren’t allowed in the observation deck, since they would take up so much space. But I did bring in a little table-top tripod with me that I tried out, perched on the ledge with the camera lens peaking through the railing. The tripod was too small and flimsy to really do a good job supporting the camera, but it worked for a few shots. 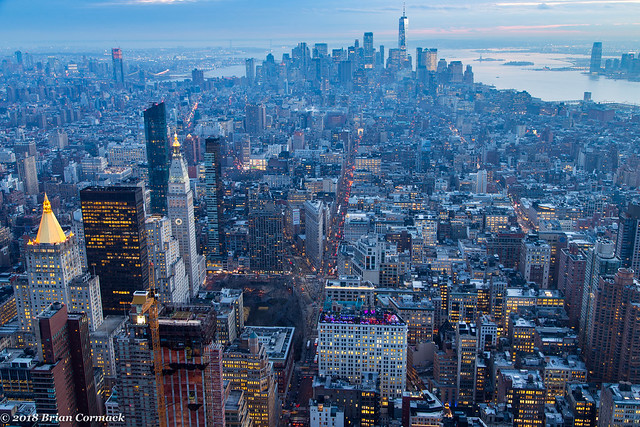 And a closer view of downtown, with the One World Trade Center building dominating the skyline. If you look closely, you can see the arch in Washington Square Park lit up. 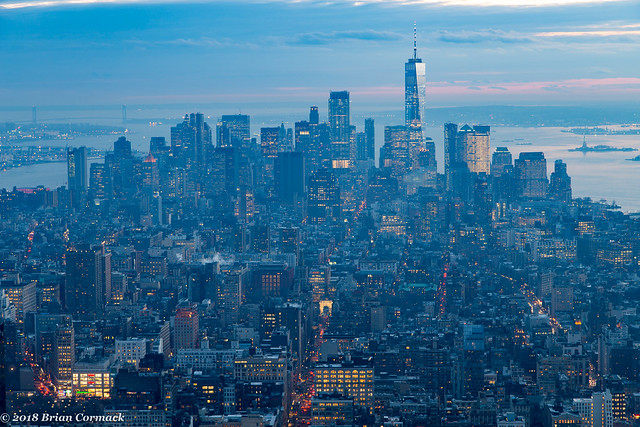 And a wider view, also showing the Flatiron Building. 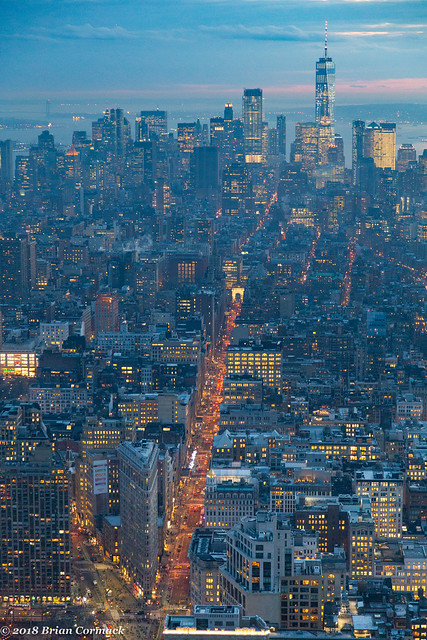 The Observation Deck got really crowded around sunset, with a crush of people pressing in on the railing. It was a little frustrating standing up there, since people would literally squeeze right in front of you to try to get in the same place that you were standing. It was a fight to keep a spot on the railing, and I was glad to step back to the other side of the deck, which wasn’t as crowded. 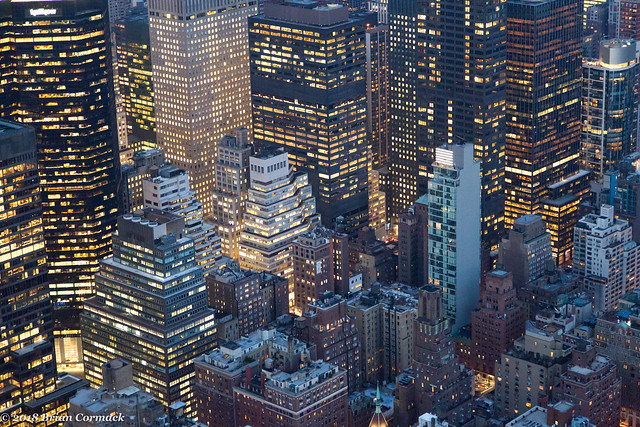 And looking towards Times Square: 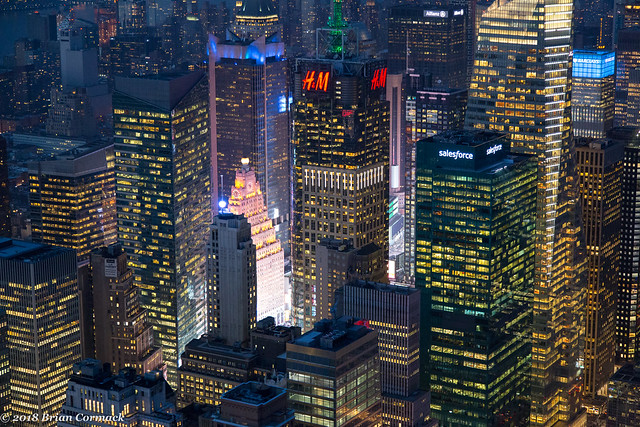 And the view looking north again, where you can see the Chrysler Building, Rockefeller Center, Times Square and Central Park. 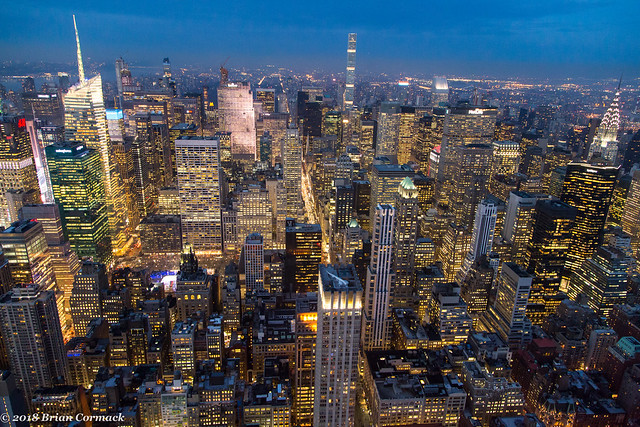 And then the view looking west, towards Madison Square Garden, Penn Station and the new Hudson Yard development. Beyond that is the Hudson River, and then New Jersey. 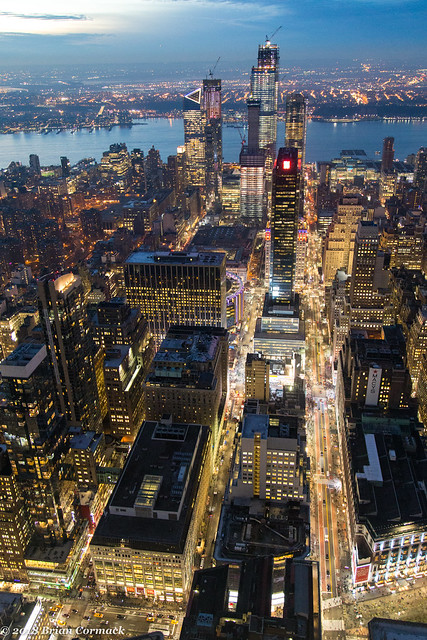 Another close-up view of the city, which looks like a screenshot from a SimCity game. 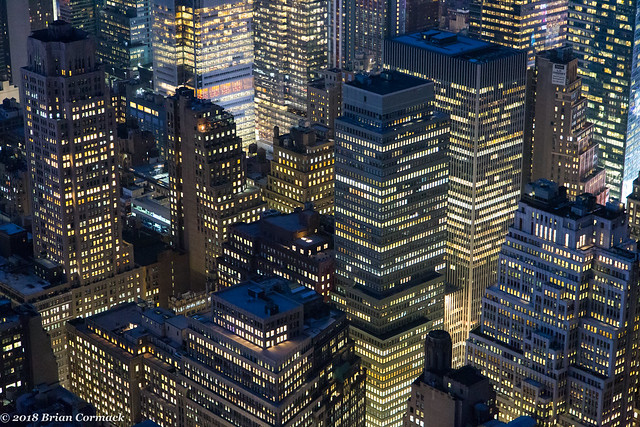 It was starting to get dark, so I got a few last shots before we left the crush of people and headed to the elevators. This is the view looking north, with a bright splash of light emanating up from Times Square. 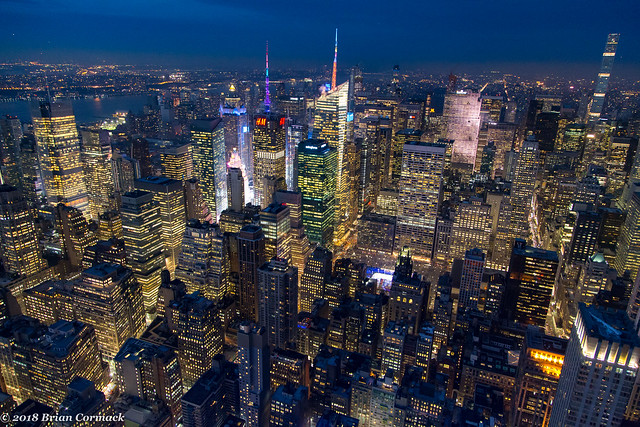 And the view looking south, with the last bit of daylight fading away over the city. 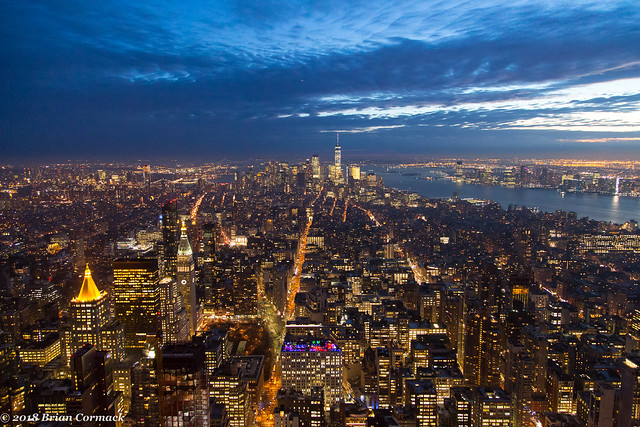