Trying to reach the great Twin Falls of Richland Creek

There is one waterfall that has long been on my list of places that I need to visit. It is supposed to be one of the more spectacular falls in the state. The falls aren't that tall, but are quite scenic. They are also incredibly difficult to reach. The falls are the Twin Falls of Devil's Fork, located in the Richland Creek Wilderness Area of the Ozark National Forest. The falls are where two separate creeks flow right next to each other and then shoot over a 20 foot tall cliff, finally meeting up and then flowing into Richland Creek. There are two ways to reach the falls, one is shorter and slightly easier, but it requires you to cross two creeks. The other is longer but more scenic. Both are rated as a "difficult bushwhack." There really isn't a set trail to reach the falls, so any attempt to reach it involves a bushwhack through some rough terrain. The view once you get there is worth it, apparently. I opted to do the shorter trail.

It had been a bit dry around here for a few weeks, and my last attempt at chasing waterfalls found them running a bit low. I made plans to head up to the falls anyways, counting on some rain to help get some volume in the falls. I was right that there would be plenty of water. It just turned out there was a bit too much.

Richland Creek is located about 40 miles north of Russellville. So I woke up early (very early for me) and headed west. It had indeed started raining, which I wasn't too worried about. I carry an umbrella with me to shield the camera, and don't mind hiking all that much when it's raining. The radio was predicting some heavy storms, though not until the afternoon. I thought I could get up there, hike to the falls and get out before it started raining too hard. That didn't quite work out.

From Russellville, you head up Highway 7 to reach Richland Creek. On the way I stopped and got a picture of this carwash in the small town of Dover... 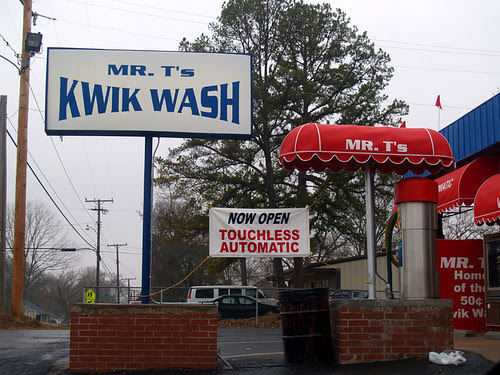 I pity the fool who don't use my carwash!

It was raining steadily on the drive up Hwy. 7, and the mountains up there were covered in fog. I stopped at an overlook, which was pointless since there was a thick fog everywhere. This was from the overlook parking lot: 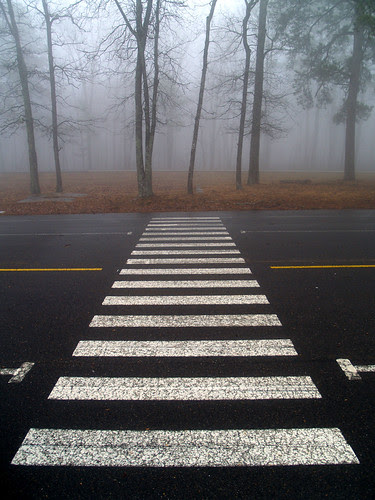 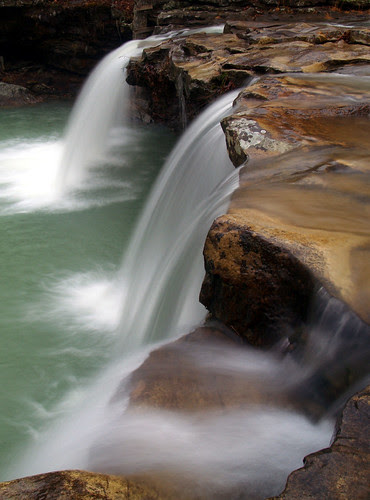 These falls are only about 12 feet tall, but look great. 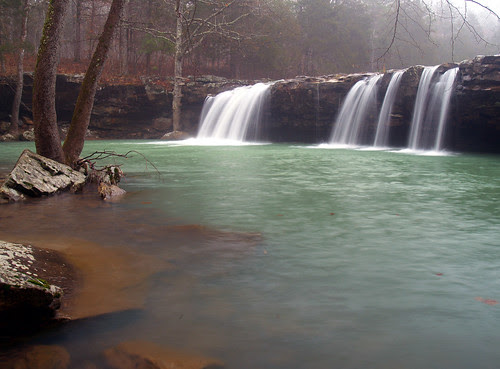 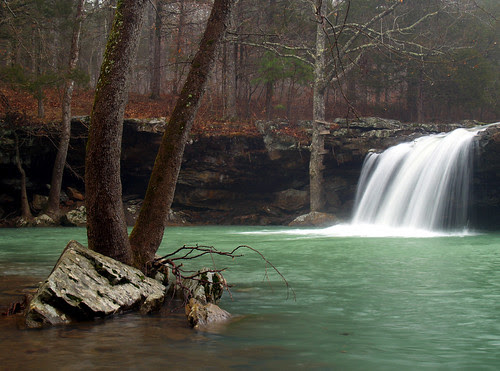 There are some great smaller waterfalls just down from the falls, so I slid around on the wet rocks and found this view: 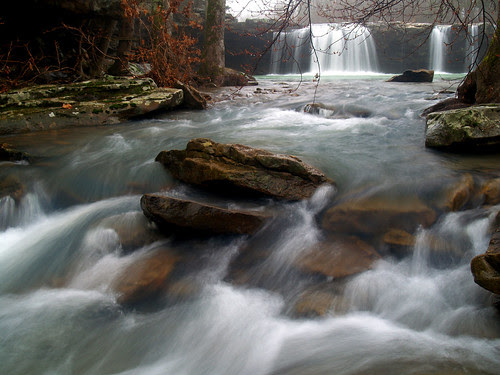 I got back in the car and headed up the road alongside Falling Water Creek. There were lots of huge rocks in the water, and lots of neat places to stop and take pictures. 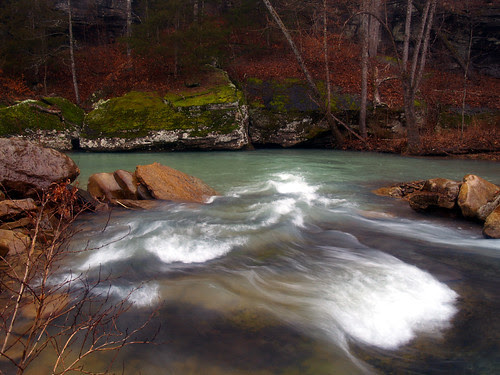 The water was high and looked cold. This did concern me, since one of the two creeks that I would have to cross to reach Twin Falls was of course, Falling Water Creek. 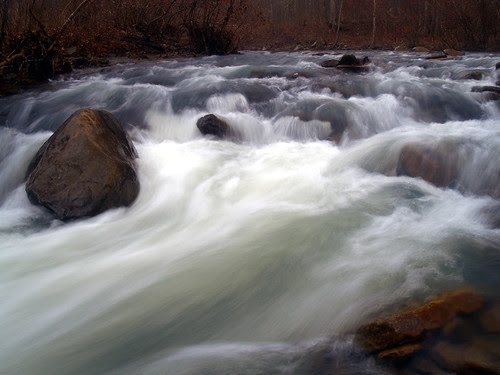 Driving on the road I came on this mailbox, with an interesting name written on it. I thought they lived in New York? Maybe this would be site of some future Presidential library? 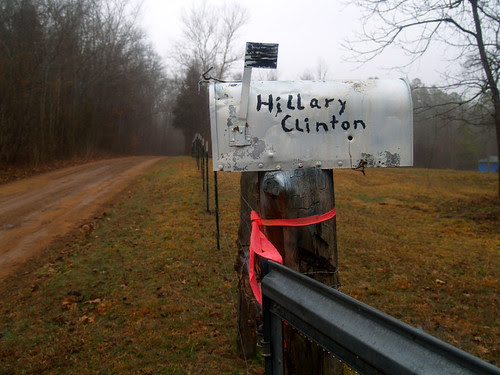 Falling Water Creek has all sorts of neat waterfalls on it. This one was very small but stretched across the entire width of the creek: 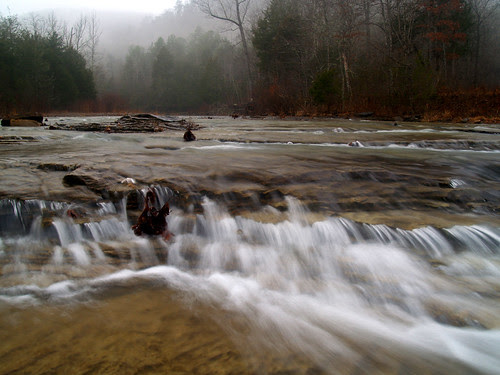 Up the road from there is another neat waterfall, called Six Finger Falls. It's called that because the water slices through the rock in six channels, which look like a hand with six fingers. I was really only able to get a view with just three of the fingers. If I waded across the creek in some fairly shallow water I could have gotten a better view. At the time I hesitated, which now seems silly since I'd end crossing this same creek in deeper water later on. 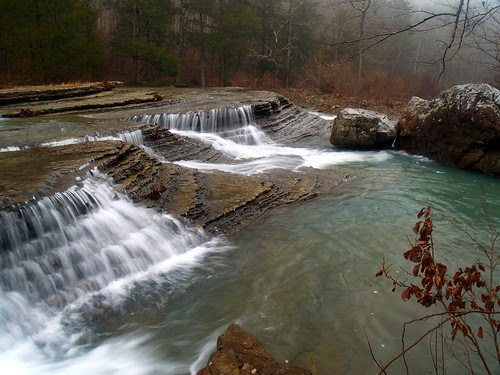 There are also two other waterfalls that are located near these falls, Keefe Falls and the oddly named Fuzzybutt Falls. To reach Fuzzybutt Falls would require crossing the creek, and Keefe Falls had a mile hike to reach it, so I continued on towards my ultimate goal, Twin Falls. There is a primitive trail that actually runs to Twin Falls - primitive meaning that it isn't maintained or blazed. The trail starts out at the campground, which is situated right above the creek. 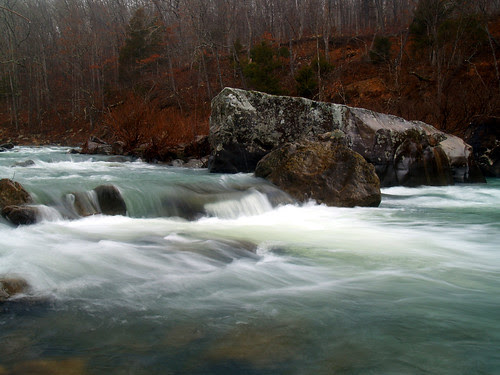 The first creek crossing is just as you start out on the primitive trail. I hiked up to it to try and judge how deep the water is. It looked deep, maybe too deep to cross. I took this shot just downstream from the crossing, and is where Falling Water Creek flows into Richland Creek. The area where you have to cross was luckily much calmer and not as rocky as this area was. 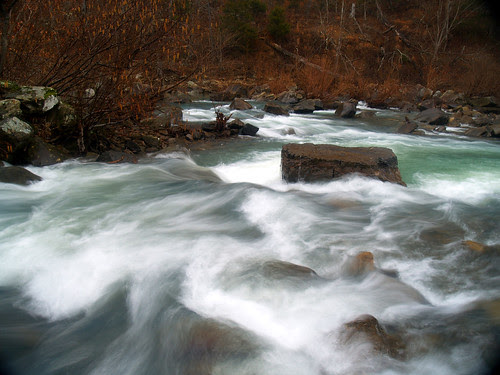 Not sure if I could cross the creek or not, I went back to my car to consider my options. The other route to the falls would be a longer hike, and I wouldn't have enough time to hike that before it got dark. There were a few other waterfalls that I could try to reach, however. What to do!? I noticed a group of hikers setting up in the parking lot, shouldering big packs. They looked like they were going to attempt the hike. So I approached them and asked if they were going to the falls. Sort of, they said. They were going camping near Twin Falls. I asked if they thought it would be ok to cross the creek. Sure! It'd be deeper than normal, and cold, but still passable. They offered to let me tag along with them if I wanted. So throwing out all common sense, I agreed to follow them on the trail.

The first task was to cross the creek. I did come prepared for this. I wore those pants with the removable legs that turn into shorts. I also brought along some flipflops and a towel. My thinking was that I could cross the creek in shorts and flipflops, then dry off and change back into the shoes. I started my crossing, the water was up above my knees, so it ended up getting the pants wet. Then I managed to drop one of the pant legs in the creek as I crossed, so they got wet as well. All that didn't matter much since it started pouring down rain, so I ended up getting soaked anyways.

The primitive trail first starts out heading up a hill, then running alongside the creek. The trail would fade out every once in awhile, so I was happy to have people in front of me who knew where they were going. It really is a beautiful area. Richland Creek is very pretty, with some huge boulders and little waterfalls along its run. 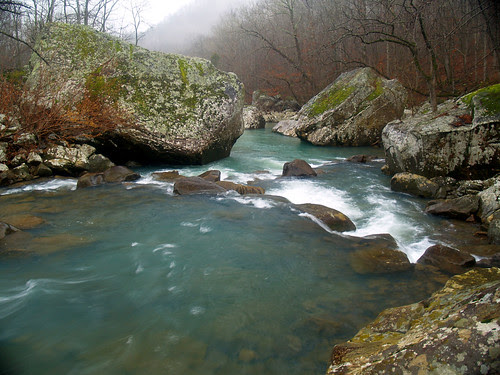 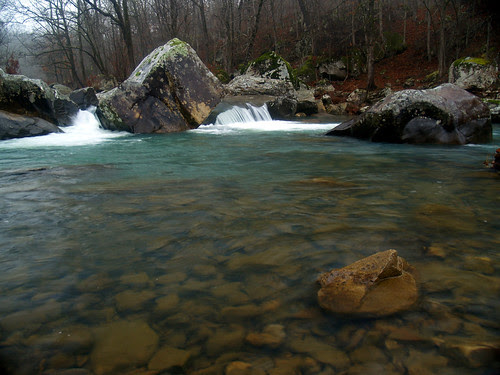 It was slow going on the trail. Mostly because I would stop to take pictures. It was hard to resist it, there seemed to be something awesome on every turn. But it was taking longer than I anticipated, and it was still pouring down rain. I began worrying that I might run out of daylight out there. 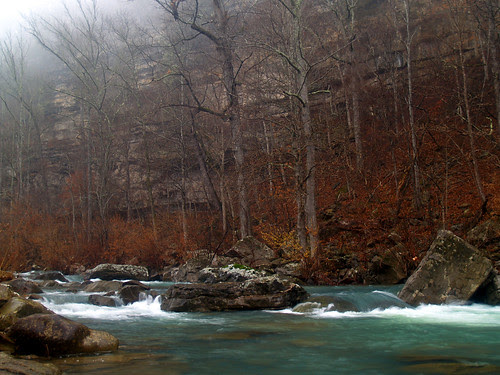 After about two hours of hiking we finally made it to the second creek crossing. The water looked deep - it was deeper than the crossing on Falling Water Creek. One of the hikers told me that last time they crossed the creek there, the water was waist deep. But now the water looked at least a foot deeper. He said the place he began to cross then was now well under water. Here is the place where you should cross. Twin Falls forms the creek that empties into Richland Creek here: 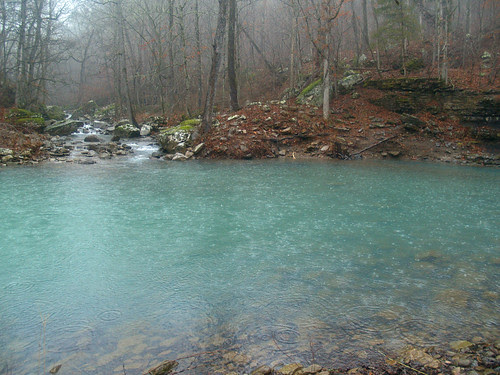 Well crap. So not really wanting to swim across the creek with my camera, I turned back. I was a bit upset since I was so close to Twin Falls but couldn't quite reach it. The falls are only a half mile from there. There is another neat waterfall nearby, Richland Falls, that I could hike to but decided at the time that it wasn't worth it. It was raining hard, with lighting and thunder popping up every once in awhile. I didn't want to leave too late and get stuck on the trail when it got dark. Also it was raining so hard I didn't want to try to cross Falling Water Creek in the higher water. Now I regret not going to see Richland Falls, which would have looked awesome in that high water. Oh well.

So I headed back on the trail. It was slick going, with deep mud on the trail. I ended up slipping and falling a few times. One of the falls I dropped my tripod, breaking it. A little bit later I slipped again and broke off another part of the tripod. I was pissed that my tripod was now just a fancy walking stick.

I made it back to the crossing of Falling Water Creek. Still mad that I broke my tripod and tired of hiking in the rain, I didn't bother changing out of my shoes and ended fording the creek without changing anything. The water seemed a bit deeper than before, though it could have been my imagination. It was still very cold, but not a bad crossing. It would have been much more uncomfortable had the water been a few inches higher (you know what I'm talking about, lads).

Luckily the creek crossing wasn't that far from where I parked my car, so I didn't have to walk far in my soaked shoes. I was counting on some extra clothes that have accumulated amongst the random junk in my car to change into out of my wet clothes. I found a few shirts, but realized the flaw in my plan. I didn't have any spare pants. It was time to make do without....

So I changed and then made the drive home wearing a fleece pullover, flipflops and boxer shorts (sexy!). I'm happy I didn't have a flat tire or get pulled over. "No officer, I haven't been drinking. Wacky story, actually...."

Rain and cloudy weather are the best times to get waterfall pictures, but I guess only when you can actually make it to see the waterfalls. I just had the joy of hiking when nature decided to dump buckets of rain. There is a website that monitors rainfall and water levels in and around the Buffalo National River. I looked at it the day after my hike and saw that the Buffalo rose nearly 10 feet from all that rain. 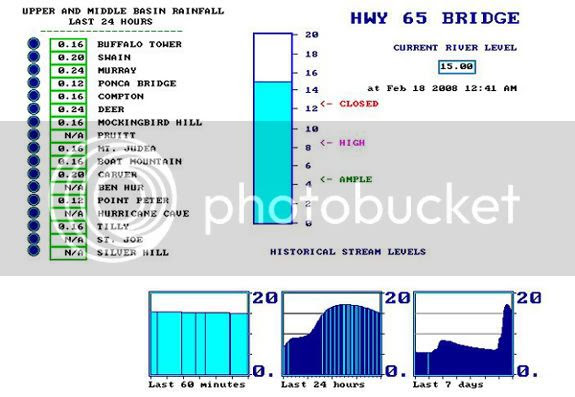 So after getting so close and turning back, I became a man on a mission. I would try my hardest to get back out there and actually make it to those damn falls. I bought a new tripod, and set out last weekend for one more attempt. I choose this time to try the longer route to the falls, the one that didn't require a creek crossing to reach it. Will your brave and heroic narrator make it there?


OK, spoiler alert: I made it: 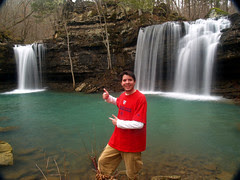 Posted by Cormackphotos at 2:05 AM