It was a good game, FC Dallas won 3-1 over the much hated Colorado Rapids. I had a good time, I guess, except for a bit of wackiness that took place while trying to get into the game.

I brought in my camera bag with me (like I've done before) and opened it up for them to search. They took one look inside and said that I couldn't go in because the lens on the camera was "too long." Apparently there is a rule in place that states that a camera that is able to get decent shots of action on field should be baned. Make any sense? It doesn't really to me, but as it was explained to me by someone on Bigsoccer.com, to take in what is considered to be "professional" quality cameras and lenses one needs to get press credentials. To get credentials then one must agree to certain terms and agreements, such as commercial use rights that pretty much say that people can't sell images of players without the team's approval.

I've never sold or had published a picture that I took at a soccer game. But I like the idea of getting press credentials to get to stand on the sidelines during a game. That is something I'll look into before the next trip to Dallas. But anyways, there aren't too many media outlets knocking down my door asking for pictures I've taken in Dallas, such as this brilliant gem: But the person at the gate told me to go back to the car and put the camera up. I thought that was bullcrap, so I went down to the next gate, where they again looked at my camera bag and then let me in without another word otherwise. Oh well. If they were really worried about me smuggling something into the park they should have noticed the four cans of beer I had hidden in my pants.

So, here are some pictures. Hopefully it is not illegal to show off pictures... 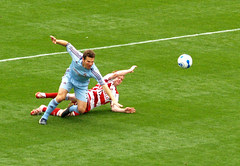 Since it was the home opener the people in Dallas were going all-out to make the game special. As the game started there were people throwing confetti and streamers. Here is where someone threw a streamer and it seems as if it is almost racing a few of the players: 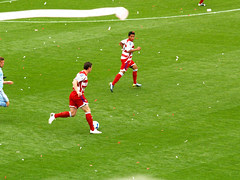 And this one is of one of the Dallas players, Dax McCarty - who is only 19. 19! It makes me feel old just typing that. 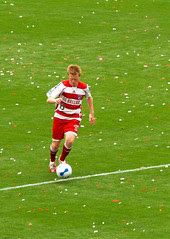 I like this shot because it looks like the Dallas player on the left (Ramon Nunez) is just sitting back with his legs crossed on some sort of invisible chair: 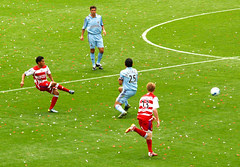 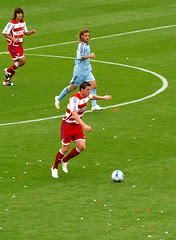 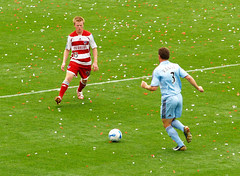 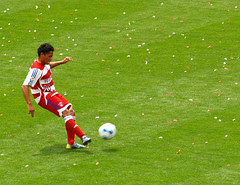 This shot is of Nunez again, right after Dallas nearly scored. Wonder what he was trying to say? 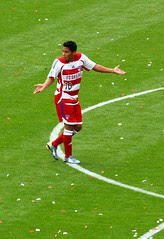 Well whatever he was trying to say probably should have been "please try not to get kicked in the face." 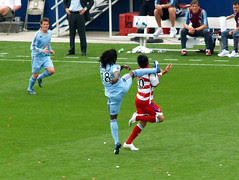 This was when FCD player Carlos Ruiz got a foot to the face. Surprisingly, the Colorado player didn't get carded for that, it was seen as accidental contact. That would be the first of many questionable calls that day... 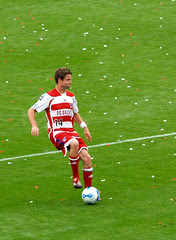 Perhaps in retaliation for getting kicked in the face, Ruiz was given a yellow card after he made a "reckless foul" against the Colorado player Kyle Beckerman. 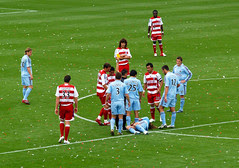 But it didn't matter cause a few minutes later this happened: 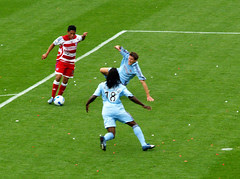 Well that shot is a bit blurry, but it is right before Nunez scored the first goal of the game. Here is a official write-up thanks to MLSnet.com:

Nunez, who missed most of training last week while he was in his native Honduras waiting to receive his U.S. green card, finally converted for the home side in the 29th minute after receiving a great pass from second-year midfielder Dax McCarty just outside the 18. After McCarty found Nunez, the Dallas native worked his way into the Rapids box and faked out defender Brandon Prideaux to give himself an open look at goal. He then beat Colorado goalkeeper Bouna Coundoul at the near post to make it 1-0. It was McCarty's first career MLS assist.

It all resulted in this: 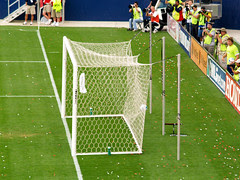 And of course there was much rejoicing and celebrating 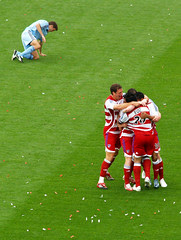 And for the people in the stands it meant more streamers...yay streamers! 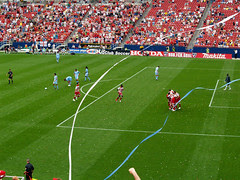 Sadly, Colorado would come back and score just five minutes later. The score was controversial since there was an apparent handball, but the refs didn't see it and the goal stood. It was a bit awesome when everyone in the stands started chanting "HANDBALL!" loudly after that. Good job crowd. 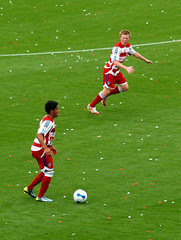 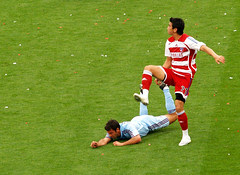 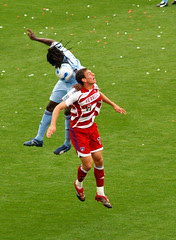 The game went 2-1 when this happened: 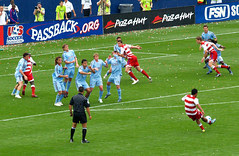 In the 78th minute, Nunez converted a free kick from about 23 yards out to make it 2-1. His bending effort clipped the outstretched Coundoul's hands before finding the back of the net. It's the second straight time Nunez has beaten the Rapids for two goals in a regular season game in Frisco; he also bagged a double against the Rocky Mountain side on June 29, 2006.

Again there was much celebrating: 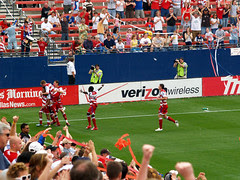 And also more streamers, though the ugly side of streamers came out when this poor guy had to run out onto the field to get everything cleaned up: 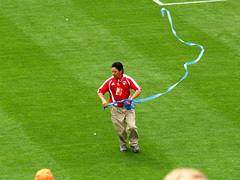 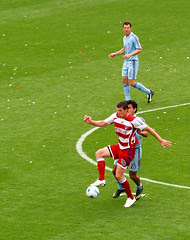 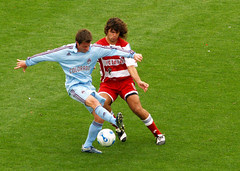 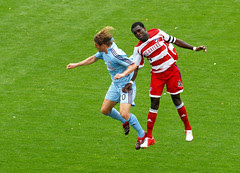 With regulation time over and a few seconds of stoppage time remaining, not many people expected this, another FCD goal!

The only shot I got was just of FCD player Kenny Cooper rushing towards the box... 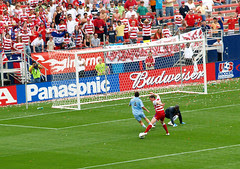 Oduro finished the game off in the third minute of stoppage time. The Ghanaian played Cooper into the penalty area, and after eluding a defender, Cooper stalled in front of Coundoul while Oduro moved into position in the heart of the area. With the 'keeper pulled away from the goal, Oduro easily hammered home Cooper's square ball.

And seemingly just a few seconds later the final whistle blew and FCD won the game 3-1. 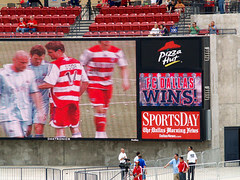 Posted by Cormackphotos at 4:34 PM